Another scandal with budget money for the construction of a kindergarten in the Saratov region can lead the investigation to Head of the region Valery Radaev and people close to him, who time after time are "nothing to do".

In the Saratov region, considered as one of the most corrupt regions of the country, led by  Valery Radaev another scandal with a corruption smell broke out. As the correspondent of The Moscow Post reports, a criminal case under the article "Negligence" was initiated during the acceptance of works on the construction of the kindergarten named "Madagascar" (funded under the national project named Demography).

The Prosecutor's Office of the Leninsky district found there an overestimation of the volume of certain types of work by 2.5 million rubles at the cost of the object in 147 million rubles. But the customer "did not find this discrepancy" during acceptance - the Sistema Сonstruction Сompany was paid more than it actually did.

So far unidentified employees of MGA Kapitalnoye Stroitelstvo - the project customer, may appear to be guilty. Law enforcement authorities have no claims to the contractor, the company LLC Sistema Construction Сompany, yet. Maybe, in vain.

Sources say that the contractor through third parties may be connected with the leadership of the region and directly the Governor Valery Radaev. Evil tongues attribute a whole network of allegedly corrupt connections tied to the business of people close to him, as if they literally "spin-off" the region to the latter.

According to rumors, the qualification under the article "Negligence" is the work of the same people of Radaev's team, trying their best to hush up what happened. It could have been something else - "Embezzlement."

MGA Kapitalnoye Stroitelstvo is a structure that directly reports to the regional administration. Valery Radaev personally came to the opening of the kindergarten. In addition, Sistema became the only company that participated in the bidding process for the construction of the unit. This alone is very strange.

However, someone, as it often happens, let it slip. Namely, Chairman of the Committee on State Construction and Local Gvernment of the Saratov Regional Duma Nikolay Bushuev. Commenting on the remarks of deputies concerned about the quality of work, he actually vouched for Head of the company Dmitry Dulepin, referring to the acquaintance with his father.

This is exactly how Bushuev acted as a guarantor of the company's obligations to the budget. "I guarantee!" - he assured, answering questions from colleagues in the Parliament. This is reported by the publication Vzglyad-info.

On the basis of acquaintance with Dulepin's father! They say that this is not just an acquaintance, but a long-standing friendship, and not only of Bushuev, but also many other Saratov officials. And there is nothing better that cements a friendship than a common business. For example, funds that, as usual, can be "taken" from the Treasury?

It seems that Bushuev has never hidden that he is a man of the Governor's "team". As, in general, Head of Saratov Mikhail Isaev is, who was supposed to control the construction. All three have come a long way in Yedinaya Rossiya (United Russia) political party, they are party members. Earlier Radaev himself was Head of the Saratov Duma, where Bushuev is now Head of the Committee.

As the General Director of JSC NPP Almaz, Bushuev never tired of describing what powerful support he feels from the head of the region. This was written by the publication Obshcestvennoye mneniye.

And, apparently, not by chance. Support from the authorities should also be felt by Sistema, which constantly receives expensive state contracts from the authorities. A decent amount has already accumulated - nearly three billion. The Commitee of Road Facilities, Improvement and transport of the Saratov Administration is the leader among contractors (765 million rubles). 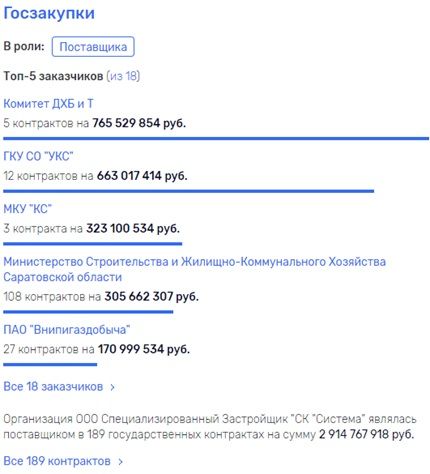 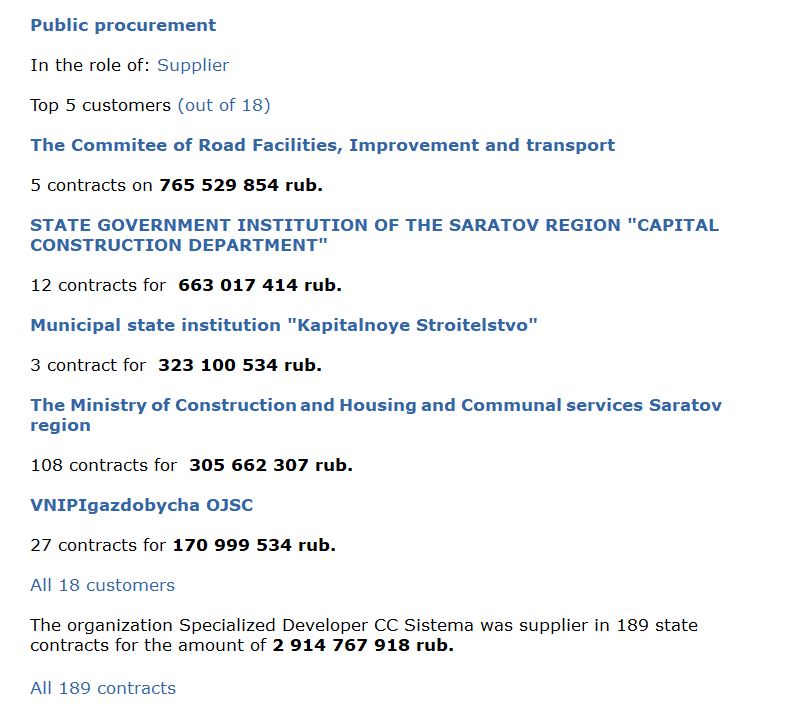 As already mentioned, the customer - MGA "Kapitalnoye Stroitelstvo" - is controlled by the Radaev's administration. Maybe that's why Sistema became the only bidder, and at acceptance, according to the investigation, they turned a blind eye for overpayment, didn't they?

Hardly anyone will be surprised by this arrangement. As mentioned, the Saratov region is one of the most corrupt in the country. In 2020, it was ranked ninth out of more than 80 regions by this indicator. This was written by Moskovsky Komsomolets.

God knows what happens to the region's budget funds. However, this may become known to law enforcement authorities, and the country's leadership should have guessed for a long time. Recently, the speaker of the state Duma Vyacheslav Volodin visited the region on a working visit, which subjected Radaev and the local authorities to sharp criticism.

The reason is the situation with the construction of a new embankment. The already built section is "falling apart", and the additionally allocated 129 million rubles were not developed and went nowhere. Last year's work schedule was disrupted - this year it may face the same fate.

Volodin was also criticized by the company "Trest N7" for delaying the terms of the overhaul of the school in Samoylovka. This was written by the publication Versia Saratov. According to rumors, this structure is another favorite of the regional authorities.

And this year, a swimming pool is being planned to be built in the same school. Who got a juicy contract for 78 million rubles? That's right, the Sistema company of Dmitry Dulepin. And this is despite the fact that there were so many questions to this structure - it often gets into proceedings with the FAS. This is written by the publication Business Vektor.

He doesn't leave his people in trouble

But it seems that Valery Radaev does not give up his people. The same as his cousin, former head of the EMERCOM of the Saratov region Igor Kachev, was not "given up" to anyone. He was detained in 2018, as journalists of FederalPress reported.

Let's leave aside the question of how the Governor's brother got this position. But Kachev was charged with abuse of office, allegedly related to fraud in public procurement in the EMERCOM. A lot of materials were collected, Kachev admitted his guilt but... was fully justified! This was written by Svobodnye Novosti. 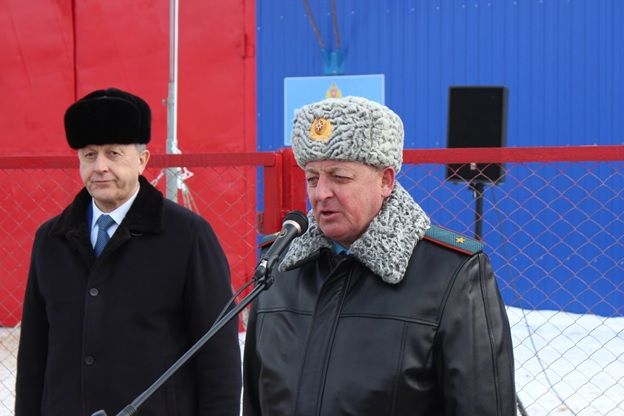 Just an amazing turn of fate in a country with a minuscule, on the verge of statistical error, percentage of acquittals. Not to mention the cases that were detained by the FSS officers based on the materials of operational developments. Miracles!

But it is not about Kachev alone. Corruption scandals rattle constantly in the region — as if  scheduled. At the end of June 2020, it became known that the Saratov Court did not cancel the decision made in April to return the case of ex-Deputy and ex-Director of JSC Avtokombinat2 Andrey Belikov to the Prosecutor. Kommersant wrote about this. The latter was considered a loyal person to Radaev. Apparently this is a payment for being left alone.

Moreover, Belikov was accused of fraudulently receiving 450 million rubles from the regional budget in the form of subsidies for the transportation of preferential categories of passengers. He was detained in the summer, and in the autumn, the measure of restraint was changed to house arrest. This is a case where half a billion dollars of our tax money could have gone missing!

Another person who is considered an associate of Radaev is Chairman of the Civic Chamber of the egion Alexander Lando. According to rumors, in 2017, he did everything to convince his colleagues in the СС to support Radaev in the elections.

But soon after, Lando was suspected of major fraud. It was written by Kommersant. Allegedly, Lando promised the already mentioned Belikov assistance in drawing lots to determine the city's passenger carriers.

In 2020, another criminal case was initiated. This time - on signs of abuse of authority by employees of the Ministry of Health of the region. Officials may have violated the law when purchasing medical equipment, and Minister Natalia Mazina, the protégé of Radaev, appeared to be under investigation. This was written by Gazeta.ru.

And all these somersaults in the region, which has been experiencing huge problems for all 8 Radaev years. The average salary there in 2019 was only 31 thousand rubles. Unemployment is rising, and the level of administrative pressure on business in Russian regions, according to the report of the Commissioner for Entrepreneurs' Rights in Russia, Boris Titov, the area was in last, the 81st place in the rating.

At the same time, local deputies do not understand what they are doing. In June 2020, at the State Duma meeting, they staged a fight, Kommersant wrote about it. "Shared" budget flows?

Boris Titov reported on the huge problems for business in the Saratov Region to President Vladimir Putin a year earlier. This was written by Versia. And so, by the summer of 2020, since the beginning of the year, almost 3.2 thousand individual entrepreneurs and 185 legal entities have ceased to exist in the region.

Apparently, they were "fed up" with the strong "concern" of the regional authorities. However, local officials seem to be even happy. Head of the Regional Federal Tax Service Elena Krasnova called it a "positive attitude" of business, as Kommersant writes. Allegedly, it steps out of the shadows, because this time the reduction of the individual entrepreneur is 400 units less than a year ago. There is something to be proud of!

Indeed, companies, such as Dulepov's Sistema, can have a positive attitude. But certainly not those who are subjected to administrative pressure and squeezed out of bidding for serious regional projects.

And, taking into account the activity of Kachev and other people close to Radaev, we can assume that neither Dulepov nor those who controlled the construction site will bear any responsibility for the scandal in "Madagascar".