Vladimir Potanin's empire is "drowning" in claims from state structures, shrinking before our eyes.

The Prosecutor General's Office filed a cassation appeal with the Supreme Court of the Russian Federation against the decision of the court of first instance, which in July 2022 approved an amicable agreement between Rosrybolovstvo and the "daughter" of Vladimir Potanin's Norilsk Nickel - NTEK JSC - in the case of causing harm to nature as a result of an accident at the Norilsk CHPP in Taimyr in 2020. The parties reached an amicable agreement in early June.

Apparently, everyone is tired of the actions of Potanin's company and now he will finally begin to be responsible for the injuries caused, and not just get off with a "settlement" agreement.

About how the oligarch's empire is melting in the material of The Moscow Post correspondent.

The accident happened two years ago on the territory of the TETs-3 of NTEK JSC. Then, as a result of the subsidence of the concrete site and the destruction of the tank, 21,163 tons of oil products spilled on the soil and into the Ambarnaya River and its tributary Daldykan, which flow into the large lake Pyasino. By the way, the governor of the Krasnoyarsk Territory, Alexander Uss, said that oil products were also found in the lake, but Norilsk Nickel denied this.

For Potanin, this was a serious blow to the wallet, because in February 2021, the court ordered Norilsk Nickel to pay 146 billion rubles. for the damage caused, it turned out to be a record compensation for harm caused to nature.

Later, a truce came between Rosrybolovstvo and NTEK JSC. Potanin's company "undertook to fully compensate in kind for harm to biological resources by releasing 28.3 million pieces of juveniles of various fish species to the reservoirs of the Norilo-Pyasinsky lake-river system affected by the accident from 2033 to 2050. In addition, NTEK should also finance scientific research to assess the state of aquatic biological resources and their habitat, planned for the period from 2023 to 2051.

However, the Prosecutor General's Office, apparently, did not suit such an "easy" outcome of the events. Potanin had to make excuses on a teleconference to President Vladimir Putin, who "zhuril" the oligarch for not repairing the tank on time. The President then also noted that as a result of the emergency, the fragile Arctic nature suffered serious damage. The Prosecutor General's Office, according to him, must "carefully" and "uncompromisingly" understand the causes of the accident.

Environmental disasters, then what Potanin's structures are famous for. For example, in the same 2020, a second accident occurred on July 12, during which a pipeline belonging to Norilsktransgazum (part of MMC Norilsk Nickel) was depressurized in the Krasnoyarsk Territory near the village of Tukhard when pumping aviation fuel. As a result, about 44.5 tons of aviation fuel spilled. And in 2016, local residents complained about the chemical pollution of the Daldykan River in Norilsk. 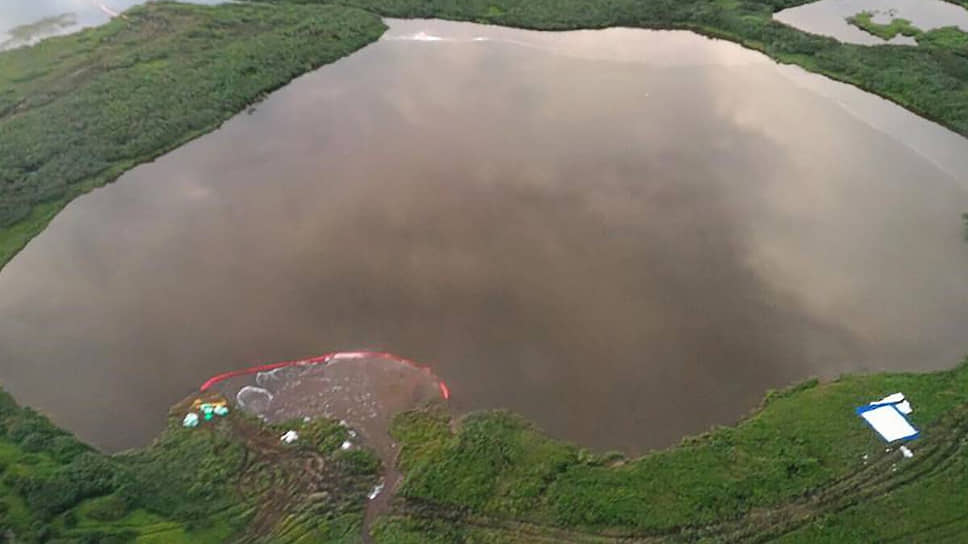 Photo: Press Service of the Administration of the Taimyr Dolgan-Nenets Municipal District

Also, a couple of years ago, the Ecologist channel on YouTube released a video in which it showed that Norilsk Nickel oil products are moving towards the Kara Sea, and all "liquidation measures" are nothing more than profanation and a beautiful picture. Bloggers wrote that they would turn to the world community.

Wouldn't it be time to break the chain of violations?

This is far from the first incident at the enterprises of Norilsk Nickel. Sometimes it comes to human sacrifice. So, in 2021, part of the building of the crushing shop of the mining and processing plant in Norilsk collapsed during repair work. Eight people were under the rubble, three died, the rest were hospitalized in serious condition. Two of them escaped on their own, four victims were pulled out by rescuers. It is noteworthy that at the time of the collapse, repair work was carried out to strengthen the structures of the workshop. They were carried out by Norilsknikelremont LLC - and this is also the structure of Norilsk Nickel.

You can also remember old episodes. For example, back in 1999, at the Anhydrite mine of the Kayerkansky mine, an explosion killed three miners. Three years later, 2 employees were killed and 4 miners were injured and injured at the Zapolyarny mine.

Next, in 2003, two miners did not rise to the surface in the Oktyabrsky mine mine. And two months later, on November 8, another tragedy happened there. After a while, in 2015, more people died in the same mine.

It is surprising that during all this time the leadership of Norilsk Nickel did not even seem to try to rectify the situation.

Earlier, The Moscow Post wrote that Rusal Group of Companies, which is associated with Oleg Deripaska, filed a lawsuit with the High Court in London against its longtime "sworn partner," the head of Norilsk Nickel, Vladimir Potanin, and his company Whiteleave Holdings Limited. A structure close to Oleg Deripaska believes that Potanin does not properly fulfill his duties as a partner in Norilsk Nickel - allegedly, because of him, the structure has lost a number of significant industries, which negatively affected the group as a whole.

We add here the fact that in April 2022 a criminal case was initiated on the fact of embezzlement on an especially large scale of the property of the Norilsk airport - one of the main infrastructure assets of Norilsk Nickel.

In order to somehow stay afloat, Vladimir Potanin's Norilsk Nickel issued bonds worth 25 billion rubles at almost 10% per annum. However, this turbulent financial activity may turn out to be another "bluff."

All these environmental disasters, showdowns with partners, the death of people in mines and the special attention of the Prosecutor General's Office and Vladimir Putin only prove that the oligarch's once powerful empire is melting before our eyes. The time when, as in the dashing 90s, it was possible to gain money uncontrollably, destroying nature and not complying with labor laws, was long over. And to establish a mining business that would meet today's requirements, Vladimir Olegovich seems to be doing poorly. Therefore, the oligarch may well lose everything that he so easily managed to get in due time.