PIK not ruined by "old" Klyachin?

Can the conflict of former business partners Alexander Klyachin and Sergey Gordeev, whom detractors accuse almost of "raider" habits, shed light on the details of their cooperation in the past?

As the correspondent of The Moscow Post reports, the scandalous entrepreneur Alexander Klyachin "clashed" with his former partner, a developer Sergey Gordeev. They might be friends, but rent space in the Rassvet loft-quarter must be payed on time, so, MMZ Rassvet, controlled by Klyachin, filed a lawsuit against the PIK GC. Soon the latter also appealed to the court. Is it possible that the confrontation between the two entrepreneurs with an ambiguous reputation can attract the attention of law enforcement officers to their past joint business affairs?

On February 1, a meeting will be held on the claim of PIK Group to PJSC Moscow Machine-Building Plant Rassvet, according to the file of arbitraion cases, Gordeev's company wants to recover 406.3 million rubles from Klyachin's enterprise. Why did the developer ask for such a large sum?

The fact is that PIK has a long-term lease agreement with Rassvet for 13.4 thousand square metres. And recently information leaked on the Internet that everything is not smooth at the facility. According to the authors of the telegram channel Kak-to vot tak, allegedly Mr. Klyachin after the purchase did not transfer the status of the plant buildings from "use for factory premises" to "use for offices". At the same time, the building is included in the City Register of Cultural Heritage of the city of Moscow. Moreover, they say, it can be dangerous for life and health being in these buildings: allegedly, there are significant violations of the standards for the content of harmful substances in building structures, and due to non-compliance with the requirements for thermal protection of buildings, part of the load-bearing walls, according to rumours, began to become covered with mold.

However, Mr. Gordeev filed a lawsuit only on December 10, and on December 17 it was accepted for production. And it happened after Klyachin himself took the first step towards creating a conflict. 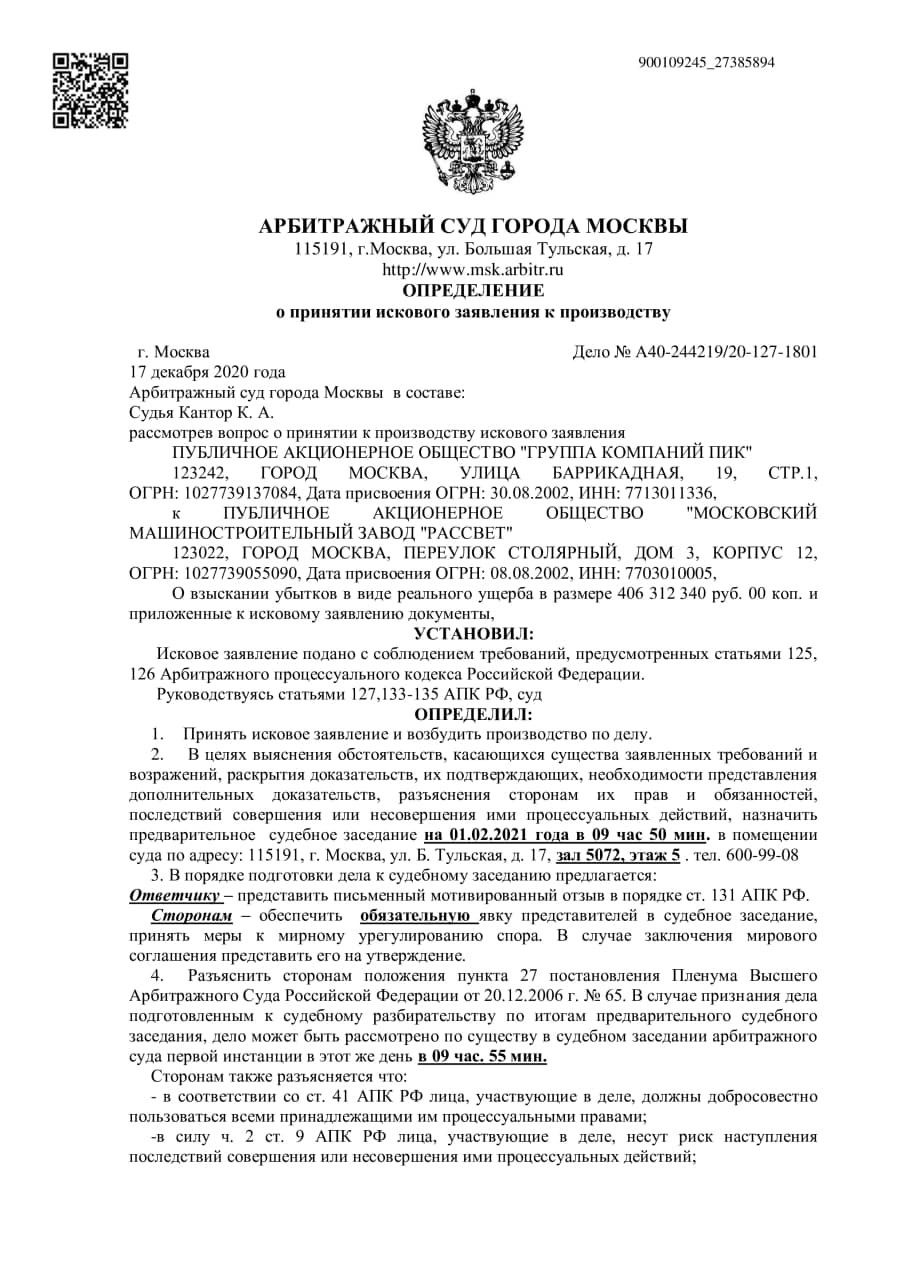 Document from the court. Getting the claim for consideration

At the end of October, Rassvet filed a lawsuit against PIK GC with a demand to recover 30 million rubles from the latter. This amount was formed from the debt for the rent and the "current" in connection with this interest. The fact is that in May, due to the pandemic, PIK sent most of the employees to online work and significant part of the space in the business centre was empty, and the owner did not really want to pay rent. Apparently, Gordeev expected that, out of old friendship, Klyachin would forgive him for the debt, didn’t he? But it was different: Klyachin, apparently, will never miss his chance. 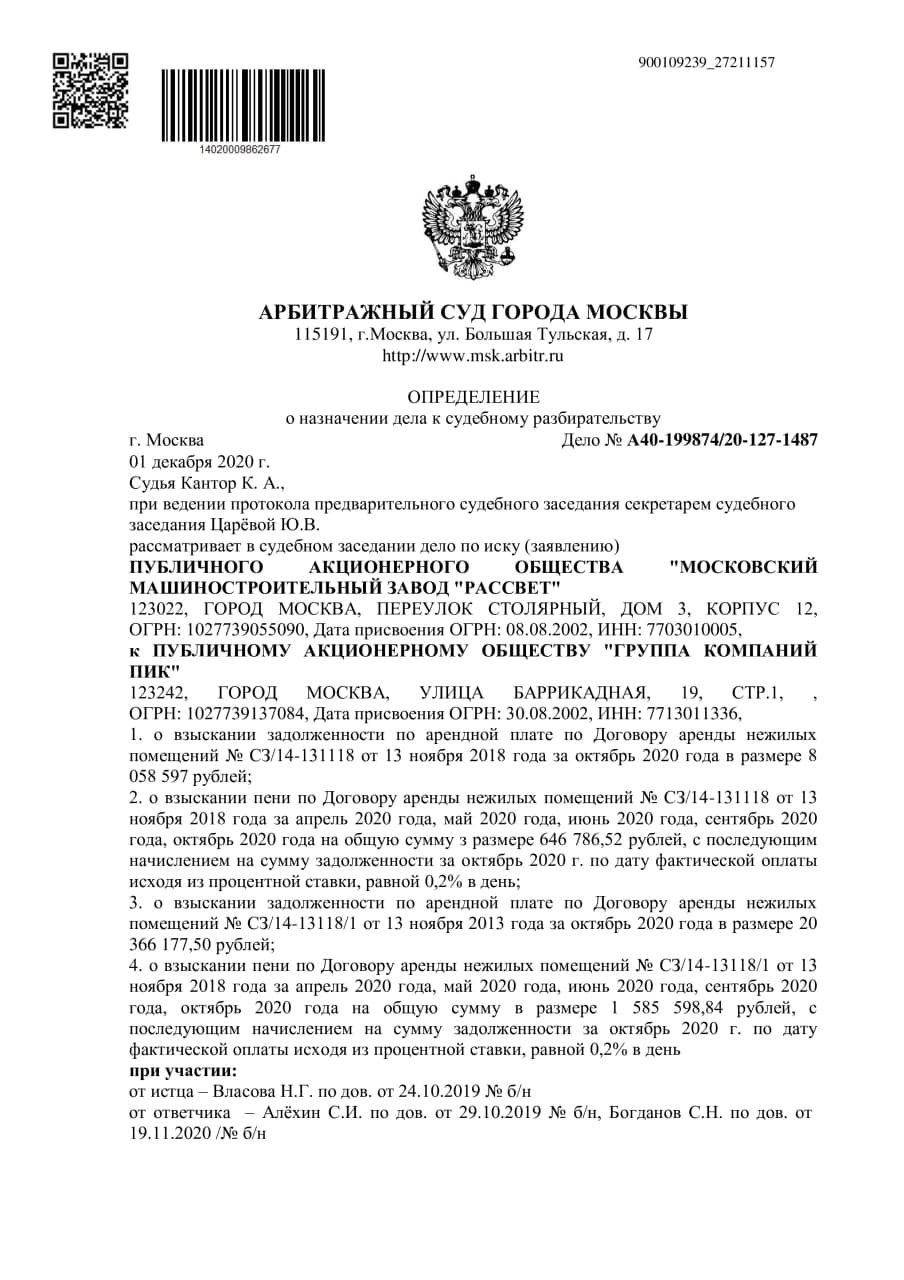 Document from the court. Determination on the appointment of the case to trial

The confrontation between two odious entrepreneurs promises to be spectacular. The fact is that both are notorious. Gordeev is remembered for his past at Rosbuilding, a company that RBC openly called "Russia's biggest raider" in its publications. And, as Meduza wrote (recognized as a foreign agent on the territory of the Russian Federation), IKEA lawyer Semyon Shevchenko in 2016 spoke about a "raider attack" on the company by a company associated with Klyachin.

At the same time, Gordeev and Klyachin once worked in tandem. As Sovershenno sekretno wrote, in the early tenth they gained control of the R-Style holding of Vyacheslav Rudnikov. At the same time, they allegedly did it in a not very friendly way: they say that they conspired with Rudnikov's cousin Vasily Vasin, entered the business, and then began to "push" the former owner out of it. When they succeeded, they began to withdraw assets from the R-Style company. What if the current conflict that broke out between Gordeev and Klyachin draws attention to an old, but no less interesting, story?

At the same time, the largest asset withdrawn was Redsys LLC, which was probably connected with Klyachin himself. The office was first mentioned in 2019, when it was searched as part of a criminal case on bribery against the deputy head of the Pension Fund Alexey Ivanov, Kommersant wrote. Redsys was one of the largest contractors of the Pension Fund of the Russian Federation - total contracts between organizations for 9.3 billion rubles. There were rumours that such favour could be explained by the fact that Anton Drozdov, the current Deputy Minister of Finance of the Russian Federation, worked as the chairman of the pension structure. His wife, Olga Demchinskaya, works as an adviser to the general director of Alexander Klyachin’s offshore Azimut Hotels Company LLC. 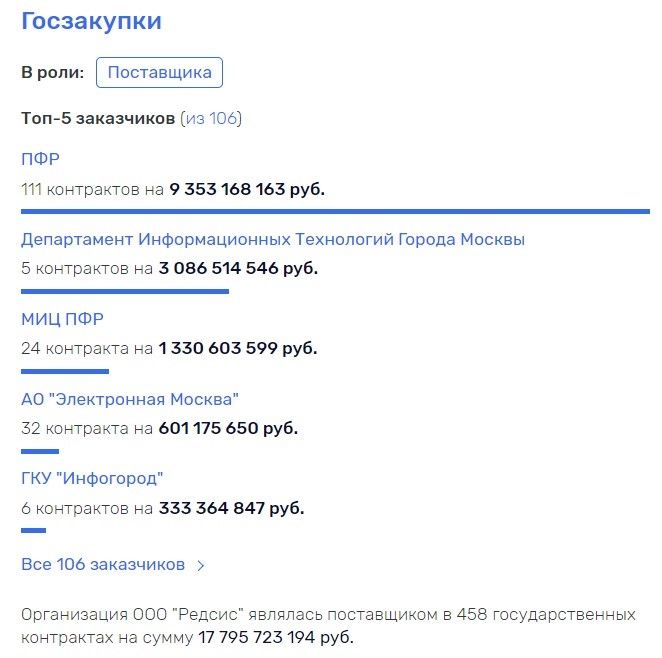 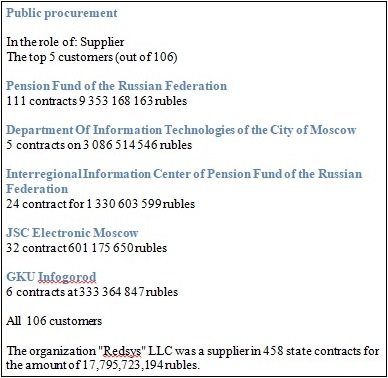 And, what is noteworthy, after the appearance of a criminal case against Ivanov, the company began bankruptcy proceedings. Is Mr. Klyachin trying to deflect possible suspicions from himself in such a way?

Against the Swedes and the Government?

There were a lot of scandals in Klyachin's career. So, for more than four years, he has been trying to "get his hands on" 16 hectares of land belonging to IKEA in Khimki near Moscow through his JSC KSHP Khimki. According to Interfax, the latter wants to prove that the plot was illegally transferred to the company in 1993.

The fact is that until 1991, the land along the Leningradskoye Highway was managed by the collective farm named Path to Communism. From 1991 to 1993, it was acquired in shared ownership by the Khimki collective agricultural enterprise (KSHP). IKEA in 1993 leased 20.88 hectares of land for 49 years. In 2011, it bought 16.5 hectares of this plot.

But there is only one catch in this case: if IKEA really got the land in a dishonest way, then the Government of the Moscow region also used it illegally - after all, it earned several years on the lease of later purchased hectares and now disposes of the remaining 4 hectares.

As argued by the authors of the telegram channel of the VChK-OGPU (now deleted post, but a reprint is preserved in  the Ministry channel), allegedly the investigator Stalina Artemenko did not tell about 18 years of being land in public ownership, and described the incident as very long execution initially formed criminal intent, which ended only in 2011 with the redemption of the land of IKEA. Allegedly, in order not to embarrass the Prosecutor's Office and the court, the investigator did not file documents on the long-term transfer of IKEA rent to the budget.

By the way, the story with the land can "hit" the regional government. The fact is that the authorities plan to build a transport interchange hub on the remaining 4 hectares. As reported by Dni.ru, JSC Khimki-Molzhaninovo is trying to challenge the state's ownership of the site for the future HUB. The company claims that the transport hub so necessary for residents of a large city will be built on land stolen with the assistance of former local officials. It turns out that Klyachin feels so confident that he does not even hesitate to go against the current governor of the Moscow region Andrey Vorobyov, doesn’t he?

According to Vse Novosti, now the ex-head of the Khimki Land Committee is accused of fraud on a particularly large scale. According to the investigation, the official illegally transferred the same 20 hectares of land in Khimki. In early January, the court had already begun examining the written evidence. The next meeting is scheduled for January 26.

At the same time, spiteful critics claim that in the dispute over the territory in Khimki, the businessman can allegedly be assisted by security forces. Perhaps the entrepreneur really has the right connections. The fact is that the associated UK Okhotny Ryad LLC has many contracts with the Prosecutor General's Office and the Department of the Mayor and Government of Moscow. 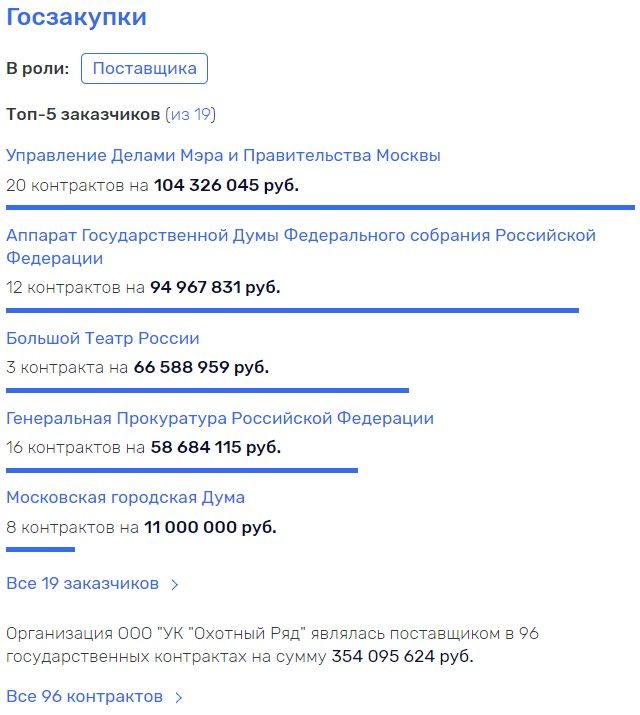 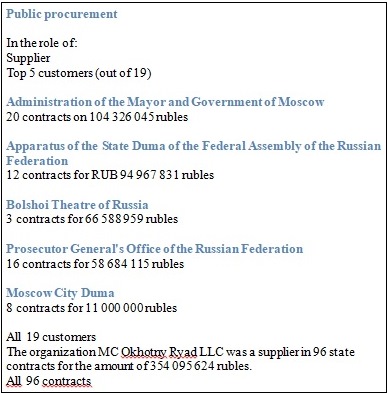 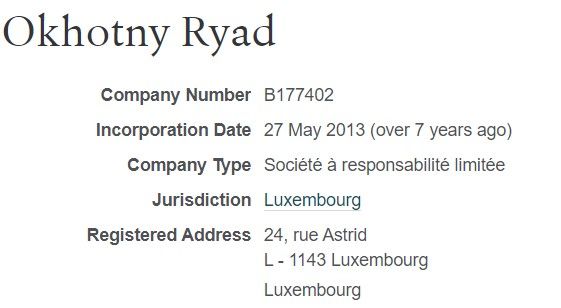 Does it seems, or Mr. Klyachin really likes to sue? At the same time, he does it even... with himself! Thus, Saburovo-Invest LLC filed a lawsuit against Azimut Hotels Company LLC! for 6 billion rubles, as follows from the file of arbitration cases file of arbitration cases. The latter company belongs to Alexander Klyachin, and Saburov-Invest may be affiliated with his former structures. However, everything ended in a settlement agreement.

Klyachin is also associated with the former head of the Ministry of Transport of the Moscow region, Petr Katsyv. According to the authors of the Bespredel portal, allegedly ex-employee of the Prosecutor's Office of the Moscow region Natalia Veselnitskaya is a lawyer for Klyachin, and also legally accompanies the Katsyv family - Petr and his son Denis.

Klyachin may have the necessary "connections" in St. Petersburg, where he is engaged in the hotel business. As Fontanka wrote, in 2018, visitors who broke through a plexiglass barrier and fell from a six-storeyed height died in one of its hotels. The investigation showed that the observation deck of the institution in fact turned out to be a prohibited roof. It is rumoured that the businessman was able to organize such a terrace not without the help of local officials.

Surely the entrepreneur managed to get the right connections - after all, he has been in business since the "dashing" 90s. Already at the dawn of his activities, his detractors dubbed him none other than a "Collective Farm raider". Klyachin is credited with the massive purchase of peasants' land and plots from various agricultural organizations through the now liquidated Nerl company. They say that the Annensky state farm, CJSC Mospromstroy, and NGO Mosspetsavtomatika could suffer from these actions.

At the same time, the process of obtaining control over firms and lands was allegedly accompanied by a "mask show". As reported by Journalistic Control, on Klyachin’s Nerl state farm field, with the support of the PSC Rodon, argued with the equally famous "purchaser" of land in the same region Vasily Boyko, who headed the Vash Finansovy Popechitel company. What only then did not take the opposite side to force the collective farmers to transfer their land shares to Nerl: they blocked the passage on the roads, cut off electricity, took the collective farmers away from home. Then Boyko even suffered physically: he broke his arm and injured his fingers. And then he was accused of attempted raider capture and sent to a pre-trial detention centre.

If Klyachin can really fight hard against opponents, then Mr. Gordeev should be wary. However, the latter is considered not a timid person - after all, a native of the Rosbuilding itself. It can be assumed that if the businessmen do not agree, a very active confrontation will unfold between them. Though in such a case, the security forces can pay attention to their past experience of cooperation. And this, in turn, is probably fraught with the appearance of a criminal case, isn’t it?

08 November, 8:08
Nakhabin Sagiryan will not take, or Abramovich will insure
See also