Paradox: Russian pharmacies sell products of the Ukrainian Farmak campaign, whose products are on the sanctions lists of the Government of the Russian Federation.

Readers again informed The Moscow Post that despite their repeated appeals to various authorities, Russian pharmacies still sell products of the Ukrainian pharmaceutical company Farmak, which is included in the list of "sanctions" companies (specified in Appendix No. 2 to the Decree of the Government of the Russian Federation No. 1300) together with its final beneficiary Zhebrovskaya Filya Ivanovna (position 250 in Appendix No. 1 to the same decree).

We are talking about the drug "Amizon," which is the own trademark of the Ukrainian company "Farmak," which pharmacists should be well aware of, so the likely arguments that they violate the government decree, because they allegedly "confused this drug with an analogue of Russian production" are not wealthy.

Who and who "treats" in this situation

Decree of the President of Russia Vladimir Putin No. 592 "On the application of special economic measures in connection with the unfriendly actions of Ukraine against citizens and legal entities of the Russian Federation" was issued on October 22, 2018 and then supplemented by two annexes with lists of representatives of Ukrainian business, in respect of which sanctions measures should be applied in Russia. 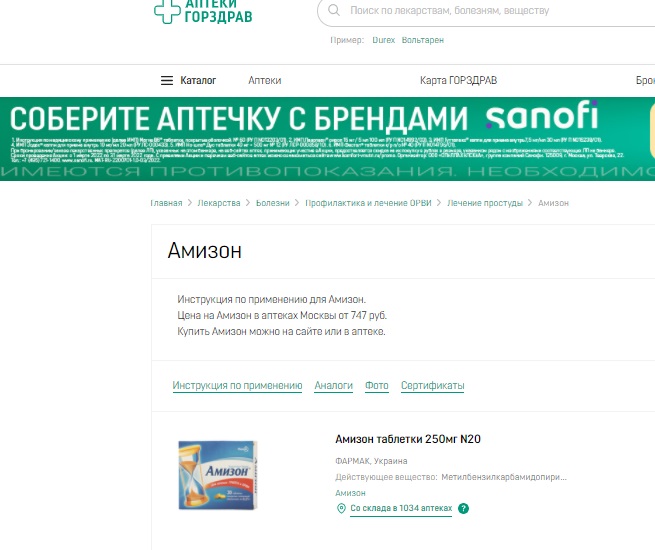 Drugs manufactured by Farmak are freely sold in Russian pharmacies. Photo: screenshot from the site gorzdrav.org

Nevertheless, the monitoring of pharmacies conducted by our readers helped establish the presence of the drug "Amizon" on open sale in the following pharmaceutical companies: "Rigla," "Farmland," "Pharmacies Gorzdrav," "Asna," "Vita" (all pages are documented and are at the disposal of the Editors). And this list is probably far from complete. In each of the pharmacies, in addition to Amizon, up to a dozen other drugs manufactured by Farmak are on sale. 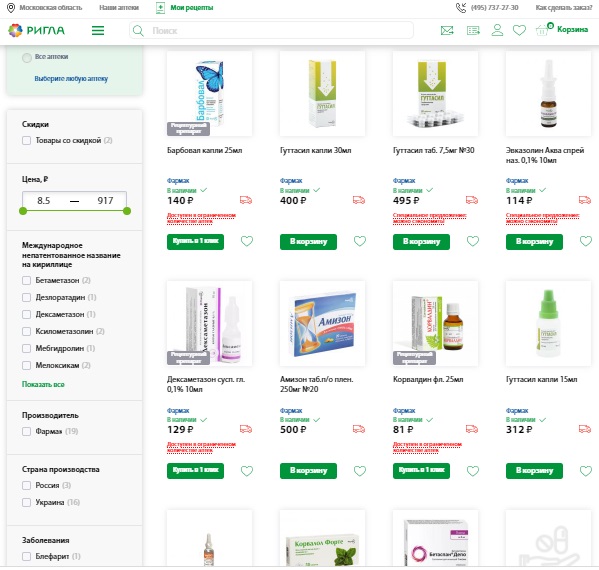 Many pharmacies sell ten or more drugs from Farmak. Photo: screenshot from the site rigla.ru

Note that the drug "Amizon" is not at all a medicine without which patients with difficult diagnoses can die. This is a common antiviral agent akin to Cycloferon and other similar drugs. Refusing to implement it would definitely not have fatal consequences for the health of patients. Nevertheless, Amizon is still on sale.

Our readers suggested that the drug, like other products from Ukrainian manufacturers from the sanctions list, could flow to Russia through Moldova as almost a smuggled product. "In fact, the sanction manufacturer with the sanction owner is fully functioning with its products through third parties, promoting its medicines in the Russian market, and reaching record profits," our readers are forced to state.

From all that follows the logical conclusion that these products are probably the subject of some criminal business and should have interested law enforcement agencies for a long time. Unless, of course, they obey the decrees of the President of Russia.

Where do officials look?

According to our readers, extremely outraged by this situation, they have already sent more than a hundred appeals, demanding to apply legal measures to sanctions products. However, after examining the pharmacy closures, we made sure that nothing had changed.

Interestingly, in 2018, after the publication of the corresponding decree of President Putin, the Ukrainian issue of Interfax reported that "Russian sanctions will not affect the work of the Pharmak pharmaceutical company, in which, citing company representatives, it was reported that" the company's strategy is aimed at increasing exports to EU countries and entering new markets. " 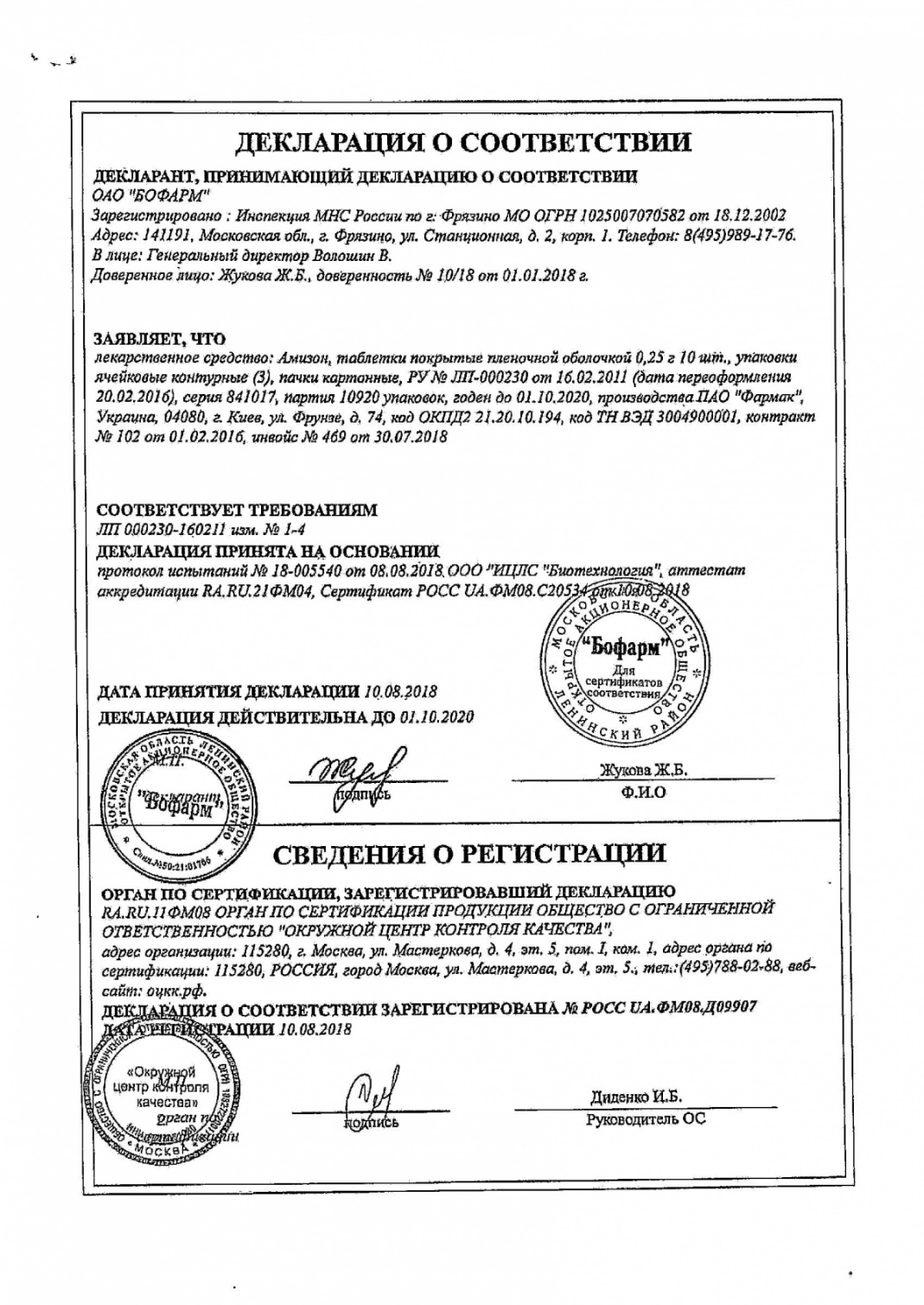 Medicines manufactured by Farmak are sold on the basis of documents issued before the publication of Presidential Decree No. 592 of 22.10.2018. Photo: rigla.ru

However, as practice shows, Farmak still did not do without the Russian market and tried to get on it at least in ringside ways. Or still managed to reach informal agreements at some of their bureaucratic levels?..

Our readers were not a timid ten and continued to methodically send their claims to instances. One of them, at last, answered the question: how Farmak products could get into Russia bypassing sanctions.

Such a response was received from the Ministry of Health of the Russian Federation. Photo: moscow-post.su

"The only thing that the Ministry of Industry and Trade has really done is successfully" covered up "with the explanation that the codes in resolution 1716-83 will affect all manufacturers. But resolution 1300 could quite be corrected by simply adding the wording of limiting the turnover (property), including by third parties... But there is no categorical one here., "Readers told The Moscow Post.

Having analyzed the information provided by pharmacies, it is not difficult to draw attention to the fact that in some places on drugs as a manufacturer from 2021, PHARMAK JSC is indicated, instead of PJSC, indicating the same address of the location and under the same trademark of the products. This is probably also one of the tricks to get into the Russian market bypassing sanctions.

Obviously, in the case of drugs from Farmak, there is a manipulation of laws, as a result of which shipments of drugs from the Ukrainian manufacturer can cross the border according to the so-called "Belarusian shrimp" principle. With a high probability, as in the case of shrimp, which Belarus actively exported without having sea fishing, Ukrainian medicines can enter Russia presumably through Moldova in the order of re-export. Thus, according to the documents, formally, a Moldovan company may be a supplier, so a violation of sanctions is not recorded anywhere. 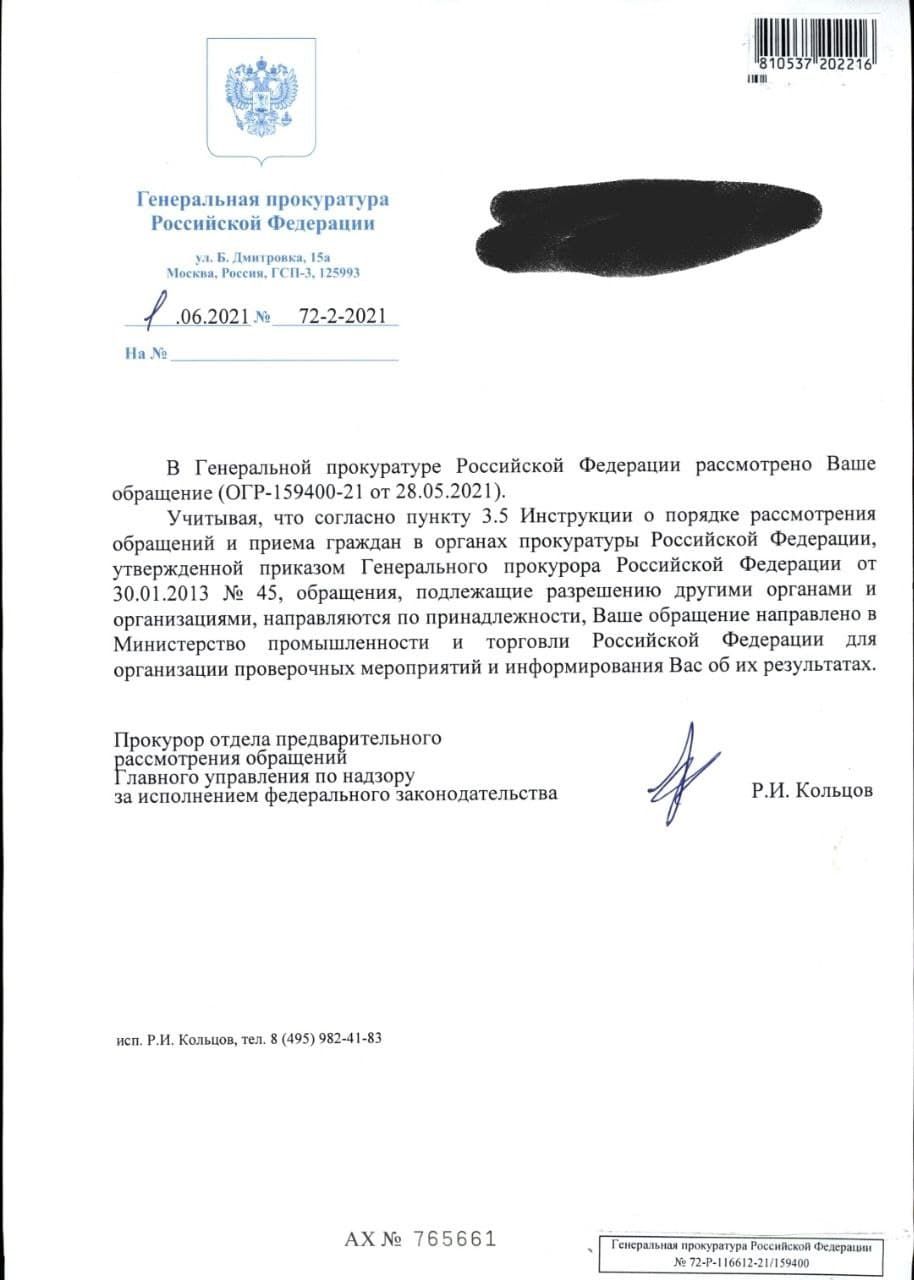 A long-standing Russian tradition is to send a complaint to someone who is complained about. Photo: moscow-post.su

Whether the very fact of getting Ukrainian products from the sanctions list into the Russian market in this way is considered a violation, the competent authorities must answer this question. At the same time, the Prosecutor General's Office sends complaints about this to the Ministry of Industry and Trade, and he stubbornly ignores this topic, forcing him to suspect his interest in it.

Recent news about the Ukrainian company Farmak reports that the founder and owner of the Ukrainian company Farmak, Filya Zhebrovskaya, was on the list of the most influential women according to Forbes magazine. But it was until mid-February. After the start of the military special operation of Russia in the Donbass, the news changed the tone. "We plan to increase the stock of raw materials slightly, but not significantly. We understand the risks of blocking ports or restricting air travel, so we also developed a plan for anti-crisis measures in this case, "Vladimir Kostyuk, executive director of the company, told reporters. 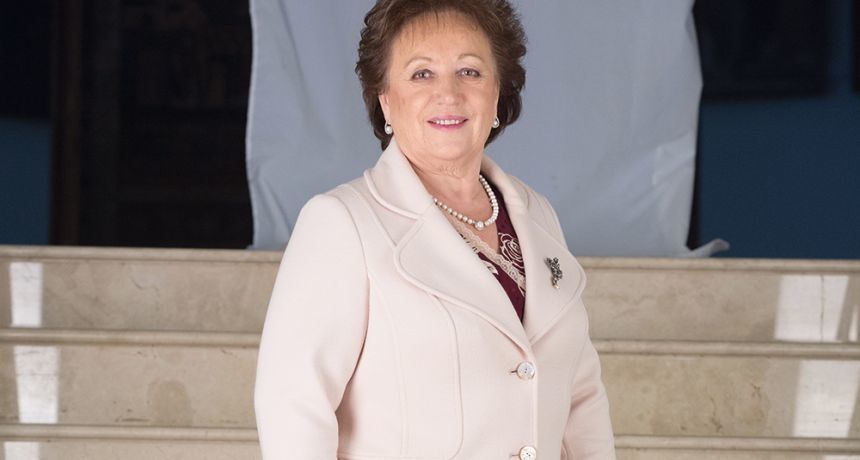 Filya Zhebrovskaya was on the list of the most influential women according to Forbes magazine. Photo: farmak.ua

Already in early March, it became clear that the growth of the dollar violated Farmak's logistical relations with the countries where the company supplied its pharmaceutical products. In particular, the president of the Association of International Pharmaceutical Manufacturers in Kazakhstan Vyacheslav Lokshin told Express-Kazakhstan. "Our cooperation with Western partners continues as usual, with the exception of the Ukrainian companies Farmamed and Farmak. But they are not sure that tomorrow nothing will change, "representatives of the pharmaceutical company Europharma told the publication. A similar situation is observed in Uzbekistan. 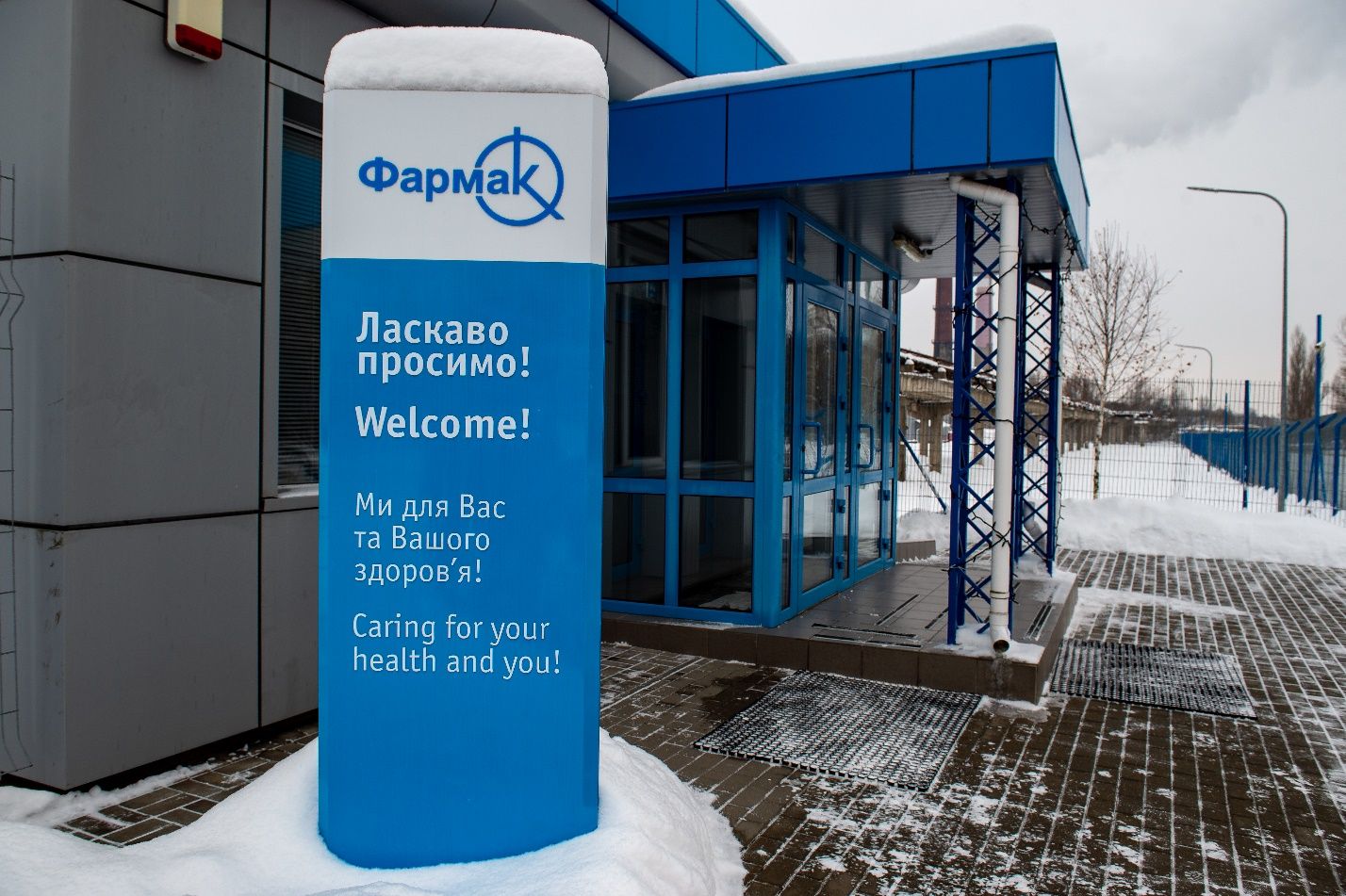 Farmak is considered one of the largest companies in Ukraine. Photo: farmak.ua

It is clear that now the Farmak company is trying to support fellow countrymen, including supplying medicines and allocating financial assistance. Information on whether Ukrainian businessmen provide financial assistance to the Armed Forces of Ukraine in the public domain is not published, but it is not difficult to assume that such assistance from the largest entrepreneurs, such as Filya Zhebrovskaya, is expected by the Ukrainian authorities.

The identity of Fili Zhebrovskaya's brother, Pavel Zhebrivsky, is noteworthy (this is how his last name is now written, the man specially changed the documents "for patriotic reasons." At one time, his sister allocated him a 15% stake in Farmak.

Pavel Zhebrivsky is known for his outspoken anti-Russian position. In particular, it was he who was the head of the Donetsk military-civil regional administration for three years - from 2015 to 2018. In this case, we are talking about the part of Donbass that did not belong to the DPR and was under the control of the Ukrainian authorities. The Ukrainian issue of RBC wrote that according to the official version, Zhebrivsky left his post because he was "tired." "Deputies from the BPP, who regularly visit Donbass, constantly insisted on the dismissal of Zhebrivsky. According to them, about his assistance to corruption schemes in the region are trumpeted at every corner. He was not engaged in the field, but was engaged in himself, "said one of the interlocutors of the publication on anonymity.

The OstroV news publication reported in 2018 that under Pavel Zhebrivsky, the leaders of the Donetsk regional administration turned out to be record holders in terms of salaries among all heads and deputy heads of Ukrainian municipalities. The salaries of the deputies of Pavel Zhebrivsky were four to five times higher than those of officials in similar positions in other areas. 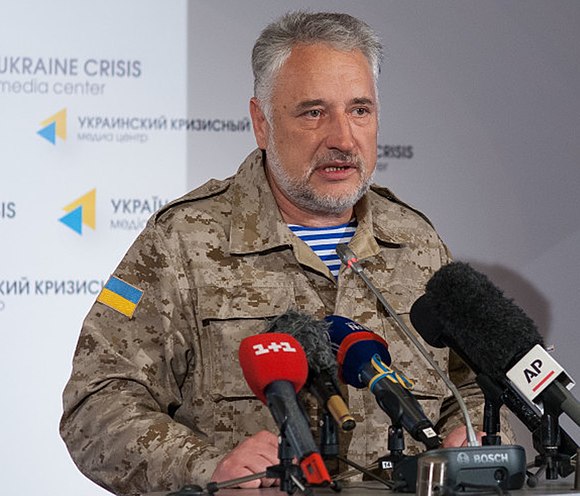 Many statements by Pavel Zhebrivsky may well be regarded as manifestations of extremism. Фото: Instagram.com/pavlo.zhebrivskyi/

And offshore "Ukrainian patriots" are also not alien. For example, in his declaration for 2017, he indicated over 1.5 million dividends from the Cypriot F.I.and P.HOLDINGS LIMITED, behind which is Farmak, the common property of Pavel Zhebrivsky and his sister Fili Zhebrovskaya, and over 1 million from his PE Yan, which sells medical glass

From the "political exploits" of Pavel Zhebrivsky, one can note his threats to return the DPR, LPR and along the way Crimea by force to Ukraine, the Donbass News reported. He also impressed the audience and the sudden rush "to destroy the Hungarian army by the forces of one 128th mountain assault brigade" sounded not so long ago on national television from the mouth of Zhebrivsky. This incident was reported by the weekly Zvezda. At the same time, Zhebrivsky did not take into account that Hungary has been a member of NATO since 1999 and, accordingly, can count on its intercession, which Ukraine will not achieve in the foreseeable future. 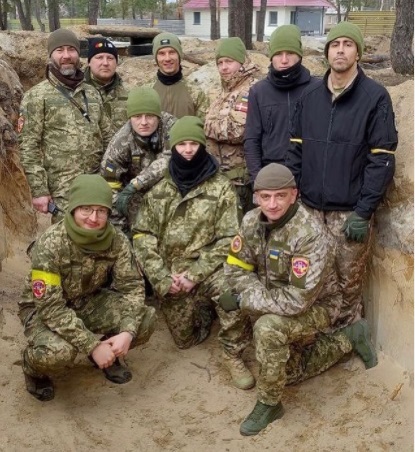 Now Zhebrisky posts photos in military uniforms on social networks. The other day, for example, he reported that their battalion became international, replenished with three British marines, as well as an American, Italian and Danish.

And this is only a small part of what is known about the owners of the Farmak company, whose products are promoted by Russian pharmacies. It would be good if this information would help those responsible to assess the situation not only from a profit point of view.