The investment project of a man whom the media call the swindler Mikhail Barakin for the construction of a shopping center near St. Petersburg may turn out to be "fake," which will have to be blown away by the governor of the Leningrad region, Alexander Drozdenko.

Yesterday, at the St. Petersburg International Economic Forum (SPIEF), the first investment agreement was signed, which immediately made a lot of noise - about the construction in the Leningrad Region, in the village of Novosaratovka of the Zvezda shopping center for 1.7 billion rubles.

One of the signatories, the governor of the Leningrad region, Alexander Drozdenko, called this agreement stellar, because the famous singer, artist Philip Kirkorov, was the co-investor of the project. However, for Drozdenko and the entire region, this project can turn into grandiose reputational losses - at best.

Why - the correspondent of The Moscow Post in the Leningrad region understood.

Recently, Mr. Kirkorov became famous not for new hits, but for desperately protecting representatives of domestic show business, who disapproved or even insulted about Russia's special military operation to protect Donbass.

For some reason, the support of such people did not prevent Kirkorov from performing in Russia or having a big business here. It is even more noteworthy, and who became the partner of the famous artist in the construction of the shopping center, which received the name "Star" (very original)?

The agreement was signed by the Leningrad Region with the company Construction Solutions LLC, where Philip Kirkorov, according to RBC, should be a co-founder.

And his partner is the scandalous St. Petersburg businessman Mikhail Barakin, whom "78.RU" called a fraudster.

Apparently, the peculiarities of doing business of Mr. Barakin are known to everyone, with the exception of Alexander Drozdenko and his officials. After all, how, in this case, he signed up for the project for the construction of a shopping center for 10-14 thousand square meters. meters worth under two billion. Few "long-term construction" in the Leningrad region, or something will fall over Drozdenko himself?

I wonder where Philip Kirkorov got the money for the project. According to RBC, he invests half of 1.7 billion rubles, but where did these funds come from, the artist flatly refused to respond. Maybe the whole amount is Barakin, and Kirkorov in the project is only for high-profile PR?

And here is the bad luck, according to the Rusprofile service, Mr. Kirkorov is neither the founder nor the co-owner of the structure. Maybe the data has not yet had time to enter? But how and with whom did Drozdenko sign the agreement then?

All this can be a big scam, where exactly the governor of the Leningrad region will be extreme. This is also hinted at by the deadlines for the project - already in 2023. And what about Barakin?

As it turned out, it is also not in the co-founders of Construction Solutions LLC - this is simply not reflected on the corresponding page in Rusprofile. It is indicated that he was the founder of several now liquidated offices, as well as one operating one - Mega-Stroy LLC. And again the question is - with whom did the governor Alexander Drozdenko sign the agreement? 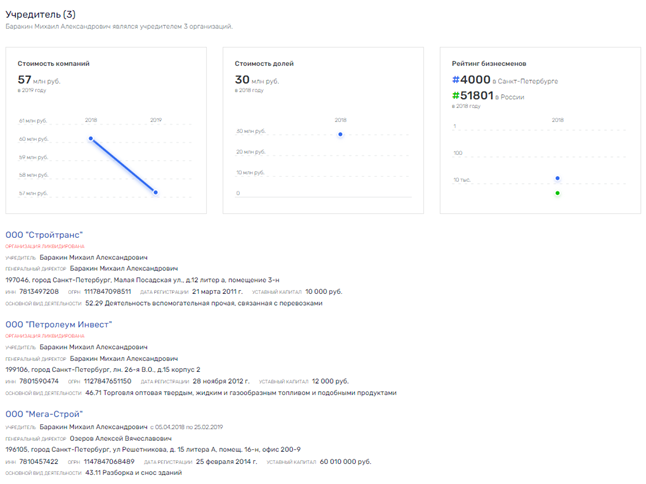 Before telling Barakin's history, we will look narrowly slightly closer at this business. It appears, in LLC Mega-Stroy only one employee - and it doesn't work at authorized capital in 60 million rubles. Someone doesn't want to pay taxes, or it is just fictitious organization? Following the results of 2021 - zero revenue and losses in 4.8 million rubles.

Journalists compare Barakin to the hero of one of Ilf and Petrov's works - the famous speculator Ostap Bender. About it the TV channel was told by the businessman who was allegedly deceived by Barakin. To the person advised to address Barakin to issue the earth under construction. That as if took money and was gone.

"I remember, he promised much, takes money big", - quotes the words of the businessman of REN-TV.

Yesterday from Barakin's lips many beautiful promises sounded too.

It is specified in the same material that on Barakin allegedly even wrote the application, but no problems at him arose. He very quietly drove about across St. Petersburg with flashers and on armored BMW.

The strange circumstance is given in other material at all: as writes the 78.ru edition with reference to the words of the acquaintance of Barakin, "Mischa acquired communications", and on the city moved on expensive cars. And not just on expensive - as if he put special signals on white BMW which painted then in colors of the Ministry of Emergency Situations - as if went by it on meetings where it is necessary "to work out" something.

If it is the truth - it is direct violation of the law.

From where is Barakin went

And there was mister Barakin in St. Petersburg almost from nowhere. More precisely from where didn't wait - from Tatarstan where initially I planned to be engaged in journalism, but I found much more profitable business - I began to trade in oil of Tatneft. With 12th on the 13th Mikhail already worked in the St. Petersburg branch of Tatneft, and became the assistant to the deputy of the State Duma from Tatarstan Ildar Gilmutdinov a bit later.

The last went the third in the regional list of the United Russia across Tatarstan, having conceded only to the head of the Republic and the prime minister of Tatarstan. To see, these communications very strongly helped Barakin to construct business in St. Petersburg - or to pretend that that is available.

Having left Tatneft, Barakin in half with the partner Kirill Meshkov create the Petrolium invest company. The firm allegedly traded in oil products with Tatneft. At the same time later Mikhail's partner was closed up really by the businessman - what can hardly be told about Barakin.

Somehow Meshkov received nearly 9% of JSC Sovtransavto (the cost of the company in the market - dozens of million dollars) and also 50% of Glavspetsstroy? The last built houses in St. Petersburg earlier, but after 2008 nothing is heard about her.

The Petrolium invest company too very quickly sank Into oblivion - was liquidated in 2014. And on the basis of the fact that was invalid legal entity. And how trade in oil products, or all this just fake? On what then "did" misters Barakin and Meshkov "rise"?

Actually, all enterprise history of mister Barakin can be a careful invention, and money at him can not be at all. But the government of the Leningrad Region for certain will help, will help in implementation of the project - will allocate the earth which can be alloyed favourably to somebody, or will help subsidies. On it and calculation?

As journalists of Channel Five wrote, all exaggerated popularity and Barakin's success appeared thanks to successful public relations. According to it media, the luxurious life Barakina was thought up by the correspondent of Fontanka Evgeny Vyshenkov.

In 2016 and 2017 the journalist issued articles where told about dizzy interviews of Barakin with the Russian Patriarch and even the President. Vyshenkov claimed that Mikhail could enter any offices without knock and solve any problems for only a few seconds.

Proceeding from scandalous publications, Barakin became a billionaire by 25 years. But as a result journalists of other media didn't manage to confirm any of the listed facts of the biography of "the successful businessman". Meanwhile, Kirkorov's partner took great pain to support the fantastic image.

According to evil tongues, allegedly main counter of Barakin - to blow cheeks, being represented by the important businessman who resolves issues. But actually after this image, apparently, don't cost anything, except thirst of recognition and easy money.

As reports Channel Five, the loudest precedent with the assistance of Barakin was connected with a dispute of Pulkovsky Meridian construction company. On the available data, Barakin suggested "to solve problems of the company" which arose at construction of the next housing complex. I exposed the price rather big - 24 million rubles. 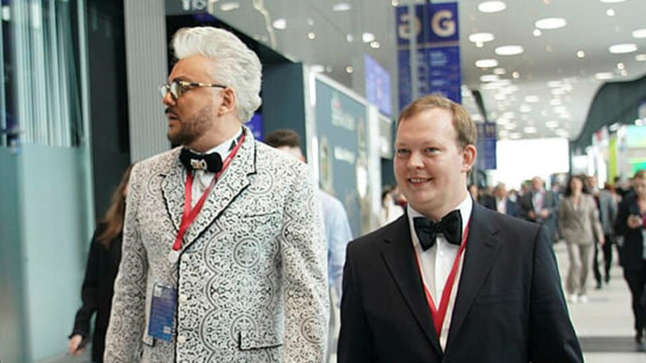 And they could well pay! Since even Alexander Drozdenko could take Barakin's bait. And for 24 million rubles, you can also rent Rolls-Royce and BMW in order to continue to "resolve issues." Whether Barakin only solved the problems of the Pulkovsky Meridian remained unknown...