"Partnered," or so "tempered" Demchenko

Leningrad region signed an agreement with an authoritative businessman and deputy - a native of the dashing 90s.

The day before, at the St. Petersburg Forum, the Governor of the Leningrad Region, Alexander Drozdenko, signed an agreement on the construction of a metal production plant with the Novosti-M holding owned by family members of State Duma deputy Ivan Demchenko.

What it will cost the Leningrad region, the correspondent of The Moscow Post understood.

The volume of investments is 37 billion rubles, the design capacity is 1.5 million rubles a year. It seems that a much more specific and attractive agreement for the region is not another glass-concrete shopping center. Moreover, the region does not have enough of its own metalworking industries. What is the problem?

The personality of Mr. Demchenko, to whom the market is trying to attribute dubious methods of doing business with a great love of budget money. He, Demchenko, is already a "four-time" deputy of the State Duma, in 2021 he was again elected from United Russia from the Krasnodar Territory.

On the network, Mr. Demchenko is called an authoritative businessman. Not surprisingly: Demchenko's formation really passed in the dashing 90s - with all the delights of this time for domestic politics and business.

According to the authors of the Glavk website, allegedly even then the full namesake Demchenko came to the attention of law enforcement agencies and was even a guest of the Krasnodar SIZO-1 on charges of murdering the famous businessman Mikhail Savchenko. The latter led and owned the Novoazovsk Lines oil bunker company, where since 1995 a person named Ivan Demchenko has been the executive director and co-owner.

Meanwhile, the future MP himself was a successful businessman. And his company Novorosmetal has become one of the largest exporters of scrap metal in the South of Russia. Rumor has it that skillful work with accounting could have contributed to such a development of events. After all, since the late 80s, Demchenko made an acquaintance with the head of the department of state revenues, taxes and consumer goods of the Krasnodar Regional Executive Committee Ivan Peronenko, who later became the head of the regional tax service and the Minister of Finance of the Krasnodar Territory.

Ivan and his son Ivan

But this is in the past, but what today?

The main, but not the only asset of Demchenko is Novosti-M LLC. In total, he established 13 companies. The total estimated value of the shares at his disposal for 2021 was 1.1 billion rubles. More precisely, whether it is a big question.

As you know, deputies in Russia cannot directly own and manage business. If we look at Novosti-M there, Demchenko Ivan Ivanovich with a 100% stake is listed among the founding owners. He is the founder of a dozen more organizations.

But there is evidence in the public domain that in February 2021, Ivan Ivanovich Demchenko resigned from the founders. The media wrote that he rewrote all his shares to his son.

Nothing has changed on paper: the same Demchenko Ivan Ivanovich.

However, older data indicate that Demchenko's share in the same Novosti was still in trust. Why then leave the founders?

We are talking about a number of companies: Kurbatovsky Melnik LLC, North-West Metazny Zavod LLC.

Among them there is also the Novosti-M management company, in which for some reason only two employees work. And if in the head "News" in finance everything is more or less decent, then there are questions. At the end of 2021, the company did not receive a penny of revenue, a loss of 13 million rubles and the value of assets in the amount of almost minus 50 million rubles.

And what about the one, the other, the first Demchenko? Which is a deputy. A train of liquidated organizations with huge "disadvantages" stretches behind it. 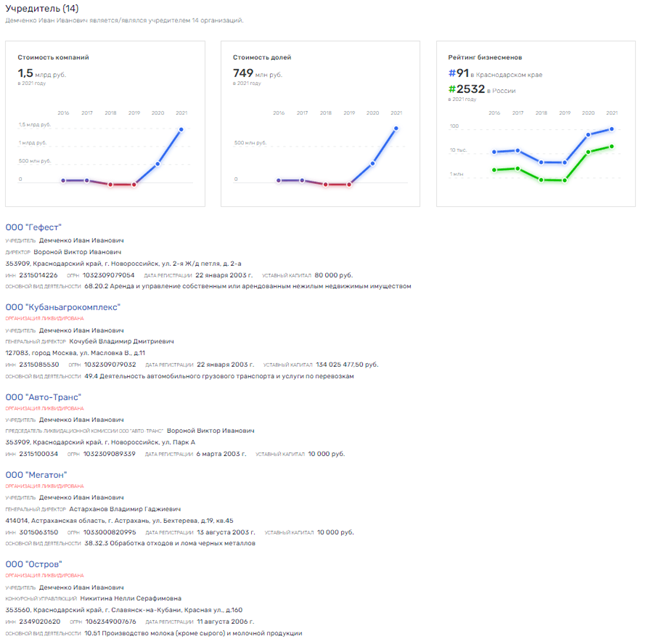 Of these, only Hephaestus LLC is alive, the reliability of which is assessed as low. Demchenko's share is in trust there. Negative value of assets, no revenue, no profit. The latter was in 2016 - 43 million rubles.

No one works in the company, it seems that it was used as a "gasket," and forgot. At the same time, she also has false information about the legal address, which always smacks of deception.

Maybe Demchenko will forget about business perturbations as soon as possible?

Special attention is drawn to the Novorosmetal LLC company - allegedly one of Demchenko's first assets. Now there is no information about this. The structure is pledged to Rosselkhozbank, and RSHB-Finance LLC is already present in the owners. The main shares belong to the Novosti LLC plant, which belongs to the entrepreneur Shalva Gibradze.

Gibradze is Demchenko's old business partner, and, according to the authors of the Rosotkat website, allegedly known in certain circles as Gia.

In the case of Novorossiysk, its loss in 2021 in the amount of 217 million rubles with revenue of almost 10 billion is interesting. The difference is colossal, where is the money?

However, there are other assets that are much more profitable and healthy, which are associated with Demchenko. For example, Abinsky Electrometallurgical Plant LLC, which Demchenko bought from Severstal Alexei Mordashov back in 2019. Revenue for 2021 - more than 100 billion rubles, profit - 15 billion rubles.

And in 2021, the FAS suddenly begins checking Novosti-M Demchenko and Severstal after rising prices for fittings.

"The department has at its disposal data that may indicate signs of concluding a price conspiracy, the consequence of which may be an increase and maintenance of selling prices for fittings," the FAS website reported. 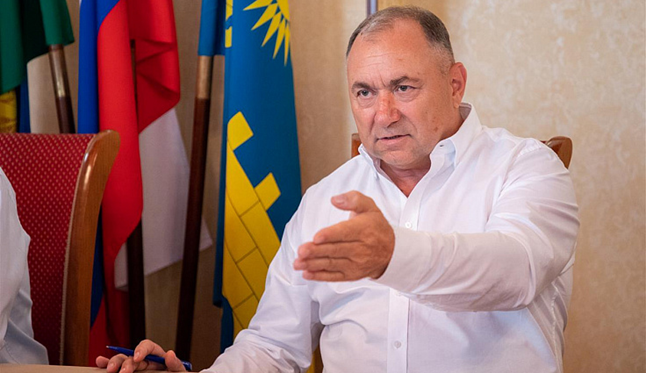 There will be more problems than benefits from Ivan Demchenko in the Leningrad region? Photo: kubzsk.ru

In conditions of instability in world markets and economic turbulence, such a decision can be considered almost anti-state. But for Demchenko, the money doesn't seem to smell.

The question is whether the Novosti-M project will be implemented in the Leningrad region, whether Governor Drozdenko hastened to sign an agreement, as he did shortly before sitting at the same table with Mikhail Barakin, whose man the media call a "swindler."