Our man in London, or them in Samara

More than a love of music and a passion for polo, it seems, connects Vladimir Avetisyan to Britain's new king.

In England, for the first time in 70 years, the monarch was replaced - the son of Elizabeth Charles became the king of the country, who during the coronation took the name Charles III. Against the background of condolences to the death of the Queen and congratulations to Charles III, including from Russia, it is not necessary to remember for a long time that rivalry remains between our countries, and in recent years - frank hostility.

Against this background, at least, friendship with the royal family of Britain of Samara oligarch Vladimir Avetisyan looks strange, in the past - one of the key leaders of such scandalous structures as Rusnano and the infamous Troika Dialog company Ruben Vardanyan.

About the business of Vladimir Avetisyan and his close relations with the royal family of enemies of Russia - in the material of the correspondent of The Moscow Post.

Play for the King

As for close relations, they are known more than from the words of Mr. Avetisyan's entourage. It's no secret - they've known Charles III since his time as Prince Charles, and together were famously into equestrian polo. After, however, Avetisyan was injured while playing polo, and the hobby had to be abandoned.

The producer of the collective Vladimir Kostryukov confirmed that the families of Avetisyan and Charles are friends, and that after an embarrassment with polo, two Vladislav and Charles drink, or play music together.

Idyll, if you do not know that Avetisyan earned his fortune in Russia, and Britain, with the great approval of the royal family, unleashed an incredible sanctions war against Russia. What is there - British instructors train the Ukrainian military so that they can kill as many of our soldiers and fighters of the People's Militia of the LPR and DPR as possible.

It's time to drink with representatives of the British royal family. And better - to sing for them. This has already happened - in the fall of 2019, D'Black and frontman Avetisyan performed at the prince's birthday party, the team was preparing a special program.

In one of his interviews, Avetisyan said that he could not even leave the country without the permission of his superiors - they say, you need a lot of papers that the leadership signs. Who did he mean - the head of state? All this looks like just an attempt to "get out."

Of course, rumors spread that Avetisyan and the royal house have a much closer relationship. It has been speculated that Avetisyan could sponsor the royal family in exchange for a green light for his capital in the West. The businessman categorically denied this. 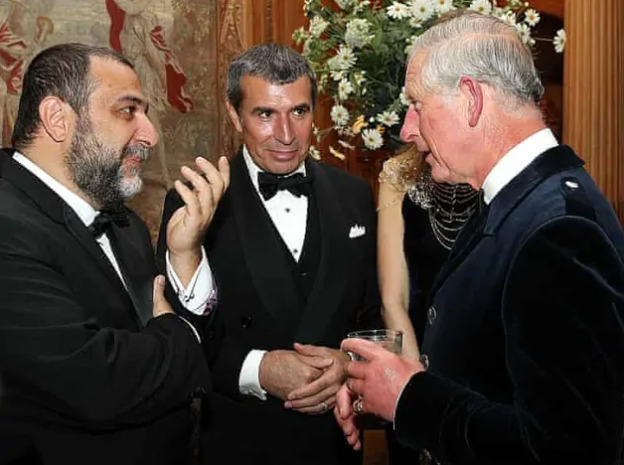 By the way, Avetisyan, among other things, is a member of the leadership of the Union of Machine Builders of Russia, has specific information about various sectors of the Russian economy. It is a "tidbit" for many intelligence agencies.

Under the wing of Chubais

Vladimir Avetisyan is a completely accomplished businessman who has a huge number of ties with the Russian elite. Billionaire, philanthropist, president of the Volgopromgaz FPG, beneficiary of the Middle Volga Gas Company and Gazbank, which has sunk into oblivion.

But he is known to the general public for other areas of work. For a long time, Mr. Avetisyan was a close associate of the former head of the state corporation Rusnano Anatoly Chubais, who prefers to survive a geopolitical storm far from Russia. Until 2020, that is, until the almost complete collapse of Rusnano, Avetisyan worked as deputy chairman of the board of Rusnano Management Company LLC.

During this period, the state corporation was repeatedly checked for possible tax evasion - security officials visited its offices. It was assumed that part of the funds could be withdrawn abroad, Izvestia wrote about that story. After the outcome of Chubais, the structure of problems only increased: it seems that only state intervention saved the corporation from bankruptcy.

Only the creation of Rusnano took 130 billion rubles - $5 billion at the then exchange rate. And in 2021 it turned out that the structure simply cannot pay off debts. But then all the "bumps" flew to Chubais, who left the country in February 2021.

Another direction of Avetisyan's work, in which he is known more than in his own business, is the leadership of Ruben Vardanyan's scandalous investment bank Troika-Dialog (in 2011 he sold the company to Sberbank).

Vardanyan himself, according to rumors, left for his historical homeland. And it is difficult to dig in to Avetisyan on the past scandals of Troika - after all, he was not a co-owner of the company. But in the leadership of the company itself was until 2020.

And in 2019, a large-scale scandal erupted: journalists from the Project to Investigate Corruption and Organized Crime (OCCRP) found out that billions of dollars were allegedly pumped through companies associated with Troika Dialog.

OCCRP concludes that Troika Dialog has created an "ecosystem" of at least 76 interconnected offshore companies. Offshore firms run by Troika Dialog "received millions of dollars, in particular from companies that withdrew money from the country using criminal schemes."

It was after the offshore scandal that rumors appeared that Avetisyan allegedly could finance the royal family of Britain, and he had to make excuses. At the same time, it would be extremely difficult to prove this - perhaps this was the calculation.

Your shirt is closer to business

In that business, the beneficiary of which is directly Avetisyan, there are no less scandals, and maybe more. What is worth only the collapse of Samara "Gazbank," which in 2018 lost the license of the Central Bank.

The grounds are interesting. Firstly, a significant amount of problematic assets has formed on the organization's balance sheet - it seems that the structure managers did not care about any risks when placing depositors' funds. And secondly, the regulator established violations of the requirements of regulatory acts in the field of countering the legalization (laundering) of proceeds from crime.

After that, in Samara, on charges of embezzlement of funds from the local Gazbank, the former acting board of directors Mikhail Lipovetsky and his deputy Vladimir Semin were detained. Both were charged with issuing deliberately bad loans to both individuals and legal entities, as well as replacing the bank's highly liquid assets with illiquid bonds of dubious structures.

At that time, the hole in the bank's capital exceeded 20 billion rubles - so much the structure owed to creditors. Of course, rumors spread that questions may appear to Avetisyan, as well as his business partner, deputy of the Samara Provincial Duma Andrei Kislov (they had 14% of Gazbank each). But both emerged dry from the water. 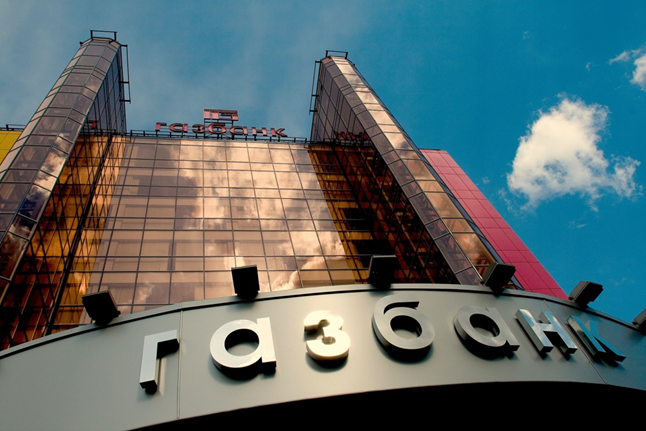 The collapse of Gazbank was one of Avetisyan's major business failures and left behind many questions. Photo: vashkaznachei.ru

Even before that, a separate major scandal happened with the financial and industrial group Volgopromgaz, headed by Vladimir Avetisyan. At the beginning of the 2000s, the company was in conflict with regional tax authorities.

In December 2000, with the sanction of the Prosecutor General's Office of Russia, the Federal Tax Police Service raided the offices of Agency of Armed Security LLC and ADF Volgopromgaz CJSC.

As the media wrote, the results were stunning. From the tables and safes were seized: copies of the materials of the criminal case on the fact of the murder of the deputy head of the operational service of the UFSNP of Russia Kupriyanov; copies of official correspondence of the tax police with the prosecutor's office of the Samara region; special equipment designed for hidden audio and video recording, listening to telephone conversations, equipment for outdoor surveillance, as well as materials proving that AVO LLC was engaged in illegal operational-search activities; information bases of the traffic police, GUVD, BTI, UMNS of the Samara region.

Note that the Agency of Armed Protection LLC provided services for the protection of Volgopromgaz. But Avetisyan himself, this story, again, did not hurt.

It was different. According to the authors of the cyclowiki website, allegedly at the same time investigative actions were carried out against Proton LLC, a division of Volgapromgaz. It was alleged that in the period 1996-2000, Proton LLC received income from operations with securities in the amount of 67.5 billion rubles, from which income tax in the amount of 23 billion rubles was not paid. In the entrance of the investigation, the formal director of the company disappeared without a trace, its founder was killed.

Another interesting point: after all, communicating with the royal family of Britain, Avetisyan can think not only for himself, but also for other influential Russians. He has a daughter who is trying to attribute a close relationship with the son of the head of Rostec, Sergei Chemezov.

We don't know about proximity, but Chemezov himself connects a lot with Avetisyan. In 2008, Avetisyan headed the United Automotive Technologies (OAT) created by Rostec, in 2010 became an adviser to the head of the state corporation Sergei Chemezov, in 2016 he was elected a member of the board of directors of Avtovaz, an auto giant that has long been in the Rostec circuit. 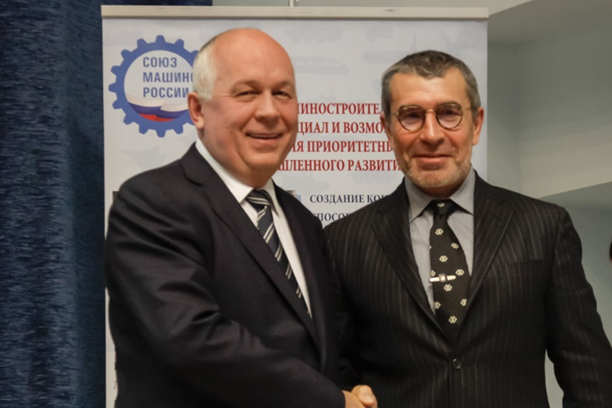 And how does the friendship of the Chemezov and Avetisyan families compare with friendly relations with the royal family of Great Britain, which imposed a bunch of sanctions on Chemezov and Rostec? Photo: glavk.net

His children also behave royally. Avetisyan's daughter Anastasia, who studied at Wellington College in Britain, was told by the staff of the educational institution by a whole crowd of guards. In a word, you can't forbid living beautifully.

On this topic, colleagues posted a video on YouTube.