Not the "Kremlin" case of deputy Ilya Stepanov

Against the background of rumors about the possible resignation of Alexei Dyumin in the Tula region, "media fabrics" continue. As "PR workers" Ilya Stepanova created a "muddy network" that could engage in information attacks on representatives of government and business.

According to the correspondent of The Moscow Post in the Tula region, rumors began to spread that the governor of the region Alexei Dyumin was being seriously considered as the new possible head of the Ministry of Emergencies. Like the tragically retired ex-head of the department Yevgeny Zinichev, Dyumin is a native of the special services and worked for a long time with Vladimir Putin.

The president trusts him, and in the position of Governor Tula, Dyumin demonstrated that he is not a controlled "functionary" at all, as the pseudo-liberal press tried to represent him, but a quite serious and competent statesman.

This is not only said by some functionaries of the Presidential Administration or representatives of local elites. This is evidenced by opinion polls, and all ratings from different agencies. So, Alexey Dyumin is steadily included in the top five of the national rating of the most popular and working heads of regions.

Of course, such rumors (about leaving) give rise to unhealthy "fermentation" among Dyumin ill-wishers from an elite environment, which is also enough in the region. True, there is an opinion that these people are ready to work with anyone to stay afloat and have their own hasheft. Today they are trying to speculate on the future of Dyumin, hoping to "catch fish in muddy water."

"Catch" only shame and attention to their own not the most decent actions.

"Media gun" in the service of Stepanov

On the eve of our publication released an investigation on the political and media "potings" of a well-known politician, businessman and even seemingly athlete in the region - the head of the local Tula public organization "MMA Federation," a native of the media medium, deputy of the Tula Regional Duma Ilya Stepanov.

Regarding MMA - it is not clear whether he performed somewhere, what is his professional record, what does he have to do with sports at all. Apparently, this structure has no relation to the official Union of mixed martial arts. If a deputy needs this to give "weight" in communicating with voters, so he already looks impressive.

But it is reliably known that Mr. Stepanov, being a deputy of the regional parliament, continues to do business. He owns Information Center LLC, which is producing the scandalous online publication SM-News. In the media environment (and not only) they are trying to imagine it as a "compromising resource," which can exist only due to custom materials. We do not try to judge.

One of the reviews from applicants for a position in SM-News, presented here

On the Web, a certain author writes about his employment experience in SM-News - as follows from the text, not very successful. According to the author of the Twitter website, allegedly edits to the test task were sent to him after 12 hours (and this is the media?), And in the structure itself, apparently, there are enough pitfalls that make it possible to doubt the decency of the beneficiaries.

But the comments of people under this information are more interesting (as far as objective feedback, we do not take to judge). One of those interested considered the work in SM-News - "the work of trolls." But there is a nuance here - they were supposedly presented as the Kremlin Editorial Board, or the Kremlin Press.

Another review taken from here

Exactly. Earlier, Ilya Stepanov had another publication, which was called the Kremlin Press. Apparently, the pathetic name was supposed to cause confidence among readers, send to the authorities, to whom this media had nothing to do.

Meanwhile, Mr. Stepanov's Information Center, which publishes SM-News, had government contracts worth 23 million rubles. For the most part, customers from the Kirov region. Government departments and institutions. It looks strange until you find out that Stepanov and Co are actively expanding to other regions. For example, they enter the Sverdlovsk region, as reported by Ura.ru. 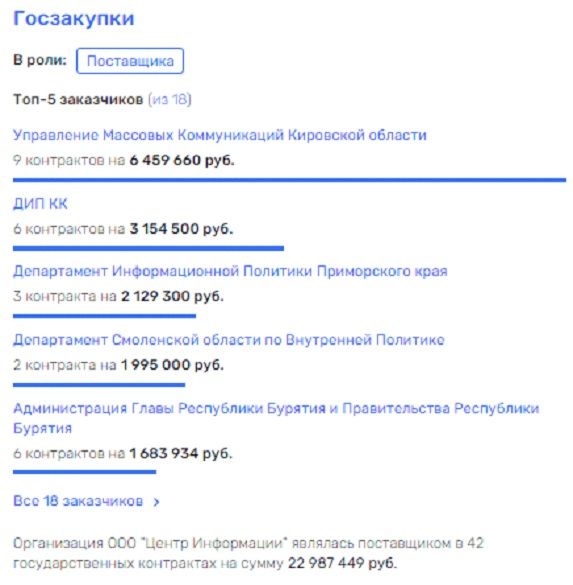 Apparently, such "journalism" is on the move and brings unflagging dividends. However, this seems to be only a screen. It seems that deputy Stepanov does not "eat" (i.e., does not "absorb budgets") in his native Tula region by state order. But no! After all, there is also an IP Stepanov Ilya Vladimirovich, and here he seems to be "burying" in the propiska region under the full program.

Because the modest IP Stepanov, who is coincidentally a deputy of the Tula Regional Duma, had state contracts worth more than 26 million rubles. As a rule - to highlight the activities of the authorities. Why not through LLC? You don't want to pay extra taxes? 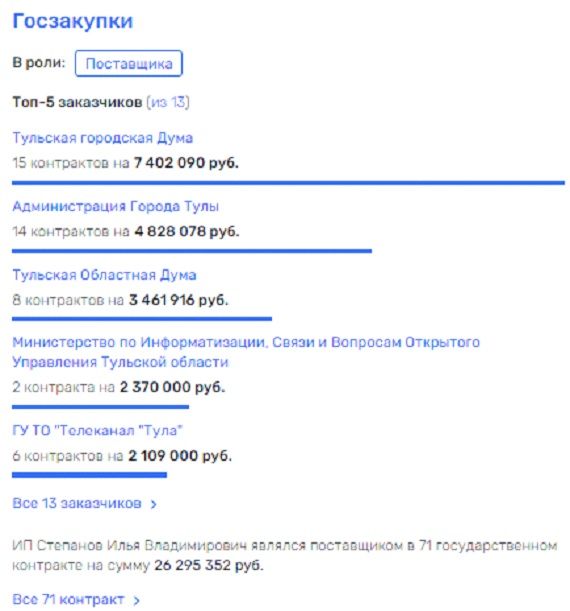 Because the Tula City Duma has an associate of Ilya Stepanov, United Russia deputy Alexander Boronenko. Just the other day he was detained and placed in the Tula pre-trial detention center. According to investigators, Mr. Boronenko, ignorance as a deputy of the City Duma in 2019, arranged three people there as his assistants.

But, according to investigators, they did not do any work. He was not engaged in the performance of their duties. But allegedly regularly received a salary for all three. For which a criminal case was instituted against him on the grounds of fraud on an especially large scale. About this wrote Kommersant.

According to the authors of the Kremlin Laundry telegram channel, allegedly during a search, Boronenko found large amounts of money, many credit cards, and various documents. The network circled photos with bills and smeared IDs, which depict a person similar to Boronenko. 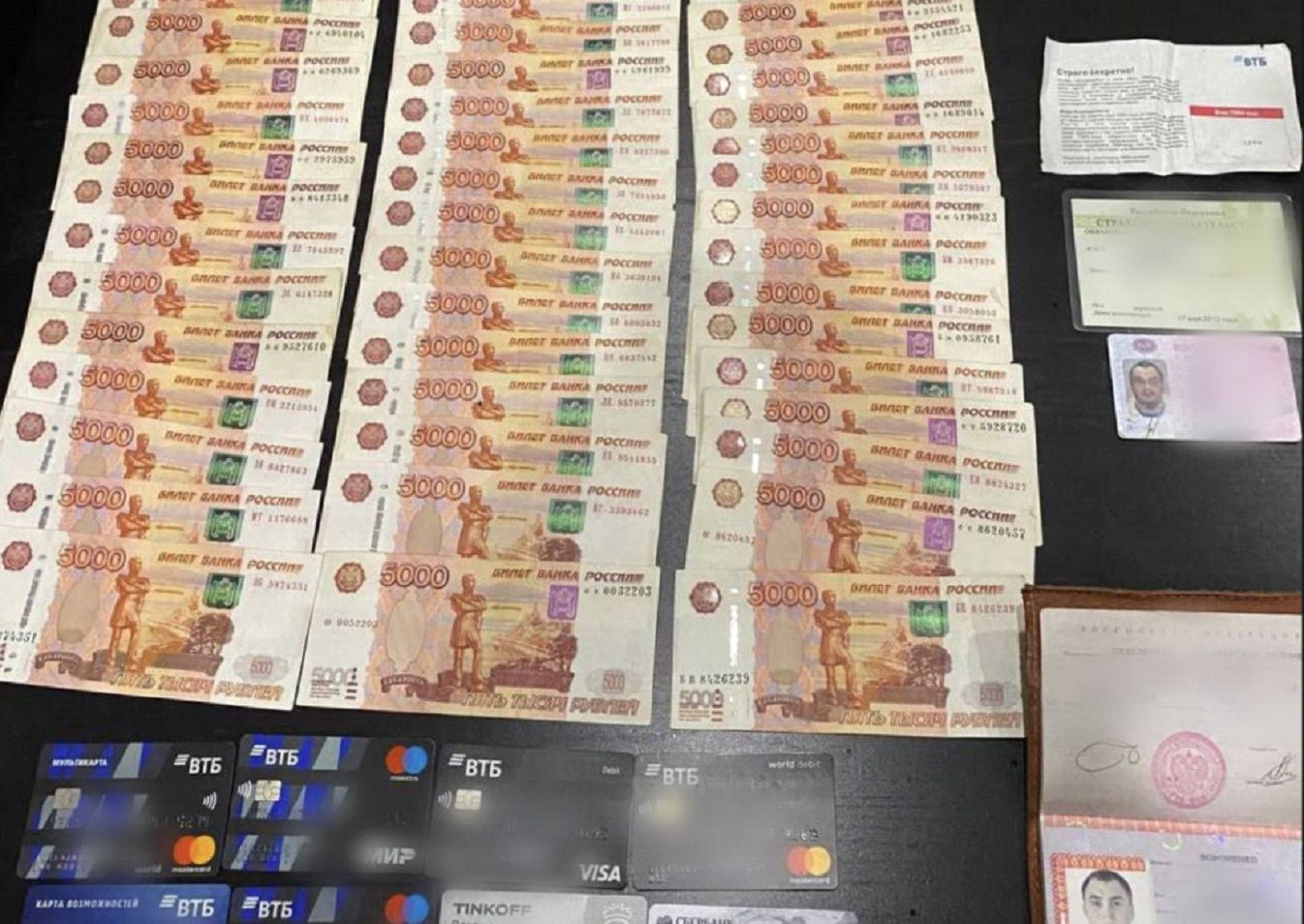 Money allegedly seized during a search of Boronenko

And here is Mr. Stepanov? And moreover, Alexander Boronenko is the deputy director in the very Center for Information LLC, which is owned by Stepanov and who has millions of state contracts with the Tula City Duma. Is the circle closed?

But this, of course, is not all. And we are not about Boronenko's problems with the traffic police (for example, allegedly about his attempt to escape from the patrol) - they seem to not pay attention to such "trifles" there at all. In the past, the editor-in-chief of the same SM-News, Dmitry Sinyaev, could get into trouble and substitute Chief Stepanov.

According to the authors of the Tula Asset website, Dmitry Sinyaev, editor-in-chief of the SM-News news agency, may be convicted of violating the procedure for media participation in information support for elections and referendums.

And he, Mr. Sinyaev, was previously the chief editor of another media - the predecessor of SM-News. Namely, the Kremlin Press website. As it turned out, this publication, until its untimely "death" in 2016 in its statue signed by Alexei Tumanov (who still works at SM-News), managed to "pour dirt" on the journalists of our media, the publication "Century" and the newspaper "Version" in custom information attacks.

However, apparently, it can be assumed that it was Mr. Stepanov, Sinyaev, Boronenko who did this, and tried to blame their colleagues.

As they say, "Do not swarm the next hole."

But why is the information resource now called SM-News, and not the Kremlin Press at all?

According to our sources, the Kremlin Press ran into a lot of trouble with its publications. Therefore, they decided to quickly "watch the rods."

And therefore, in 2016, as soon as Alexei Dyumin, the real, and not the "fake" representative of the Kremlin, became governor of the Tula region, the publishers of SM-News hastened to "cover the shop" on their own. Apparently, so as not to annoy Alexei Gennadievich and other respected people? But the matter seems to have continued.

Meanwhile, these citizens also have another company called Vision LLC, of which Anna Stepanova had a 100% share. Probably a close relative of Ilya Stepanov. 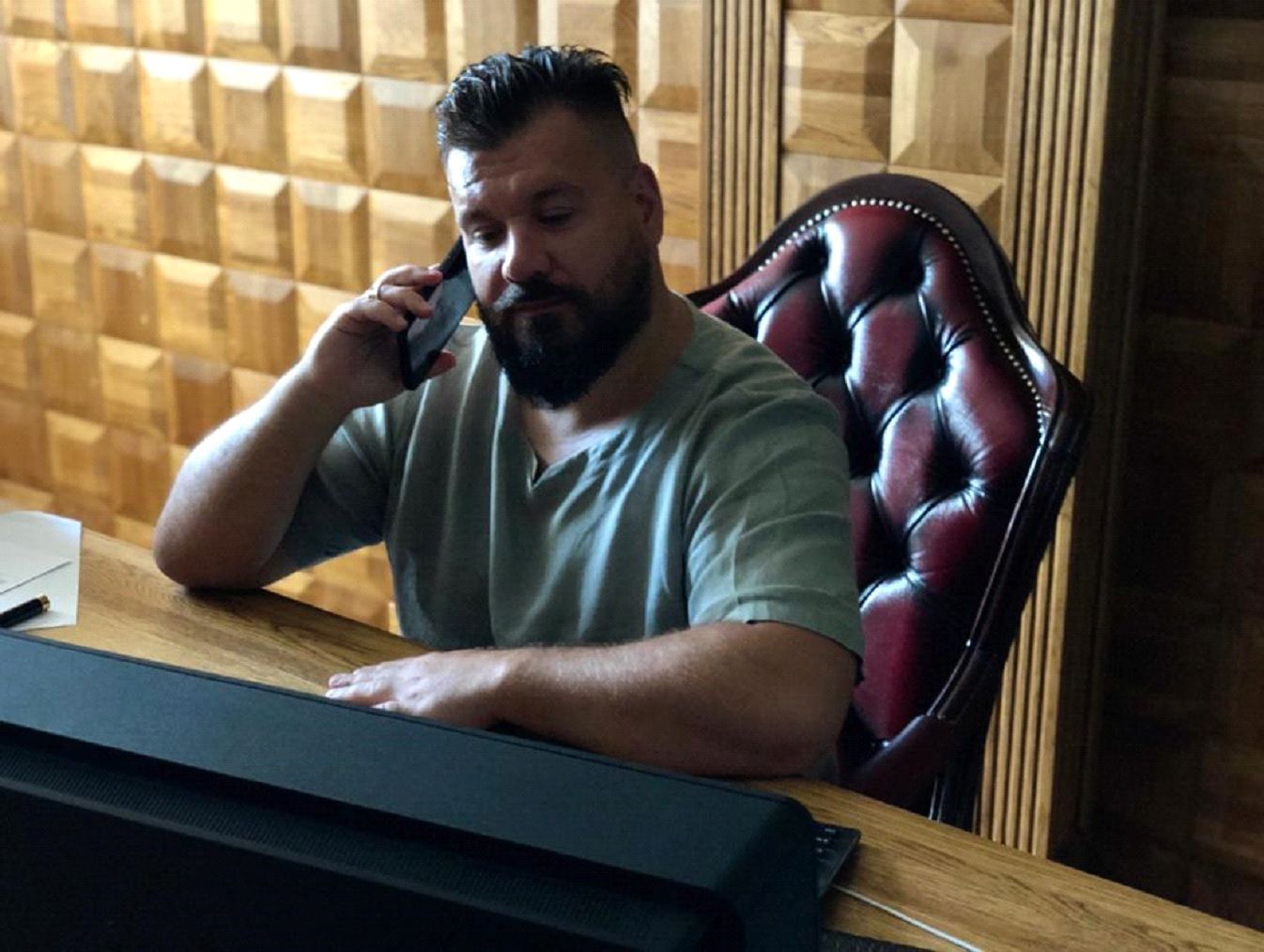 Ilya Stepanov is a solid deputy, although he may seem to someone more like a "brother" from the 90s or a "solver" of issues than politics

Today, according to the results of 2020, the company has a loss of 837 thousand rubles with a minus net asset value of 15 million rubles. The authorized capital is 10 thousand rubles.

In general, it seems that the business is somehow not very. Maybe it's time for Stepanov to change life guidelines? However, this is unlikely to deter him from possible speculation on the personality of the new Tula governor - when the old one is in place and is not going to go anywhere yet.