Not "Technoserv" only - old-new "feeders" of the Ananiev at PFRF?

Not only Technoserv and Redsys, but also a whole network of other companies could take part in possible embezzlement on state contracts in the PFRF. They may also be closely associated with the Ananyevs, but these firms, contracts, and episodes still remain in the shadows.

According to the authors of the telegram channel Banksta, a new group of former and current employees of the institution allegedly went to the pre-trial detention centre in the case of corruption when concluding state contracts with the Pension Fund of the Russian Federation.

The arrests come as a new criminal case is being opened against one of the fugitive bankers brothers, Alexey Ananyev. He and his brother Dmitry not only "caused a stir" with their Promsvyazbank (according to investigators, they could have embezzled about 100 billion rubles), but could also give large bribes to PFRF officials. RBC wrote about this.

Among the companies allegedly associated with the Ananyevs, and possible beneficiaries of murky schemes, two ones constantly sound. These are Ananyev’s Technoserv, where the detained former Deputy of Drozdov Alexey Ivanov previously worked, and the it structure Redsys. The latter could have been related to them through its beneficiaries, which evil tongues call Vasily Vasin and Sergey Gordeev (not the one from the PIK).

But if they received state grants for bribes, were they alone? It doesn’t seem so. There were others that could also be "covered up". And some - with the participation of the same Ananyevs.

We found an interesting structure. One of them is -  Computel Systems Management (CSM). It seems that this is another "beloved wife" who received almost 2.5 billion rubles from the PFRF under 17 state contracts. In addition to this, it had contracts with the Interregional Information Centre of the PFRF for almost 630 million rubles. Total - over 3 billion rubles. 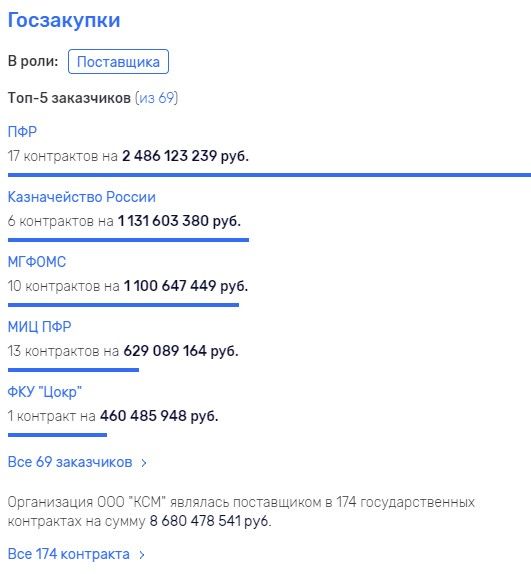 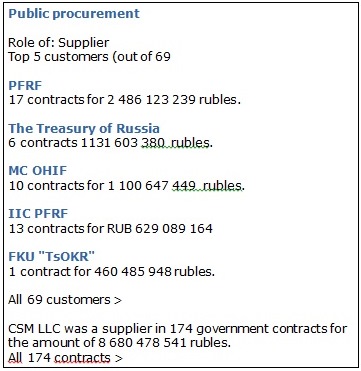 Let us recall that one of the allegedly sent to the detention centre functionaries of the PFRF is just the head of the PFRF IIC Konstantin Yankin. He probably could have been together with Rudnev, to manage issues of contracting. But it is unclear how this company was allowed to bid at all. Meanwhile, it may be directly linked to runaway bankers.

CSM LLC is owned by two legal entities - Teligent LLC and Magellan LLC. CSM is now declared bankrupt. The decision is recent, from September 28. And it entered the bankruptcy procedure in March - that is, about a month after the resignation of the former head of the PFRF Anton Drozdov. It looks like someone was covering their tracks when they realized that there was a problem. 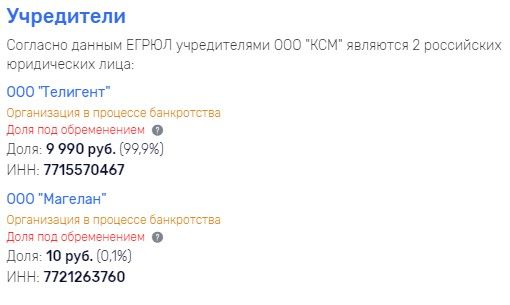 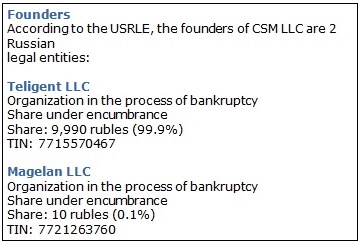 And here's what else is interesting. The shares of these companies are under encumbrance - secured by Promsvyazbank, which was owned by the Ananyevs. And the shares were put on bail back in 2018, when the was no final clarity with the criminal cases of the Ananyevs. 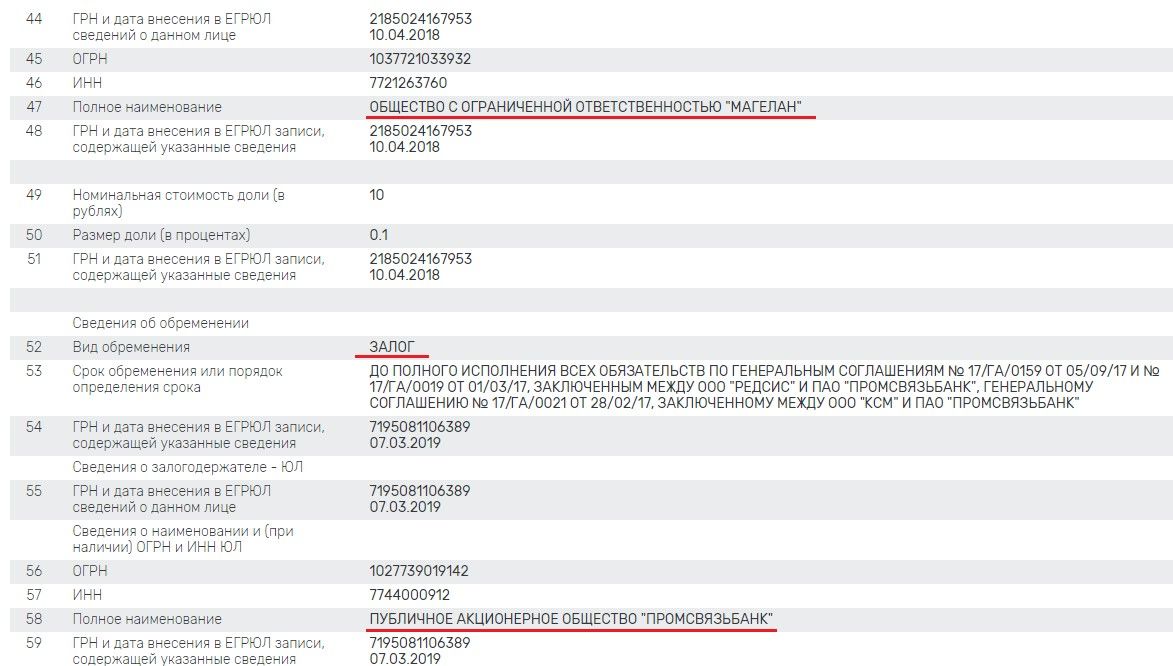 And from the same year 2018 - the last major state contract of the company. For 226 million rubles - "Technical support of the centralized monitoring system of the ViPNet network". It was performed only at the very end of 2019. That is, just before Drozdov's resignation and just a few months before CSM entered bankruptcy proceedings.

All this suggests that money was withdrawn from the company. And all of 2019. They were taken out in a hurry, not having time to cover their tracks. Where to? The answer may lie in the owners of the founders of CSM LLC. First, Teligent LLC is also in bankruptcy proceedings today. 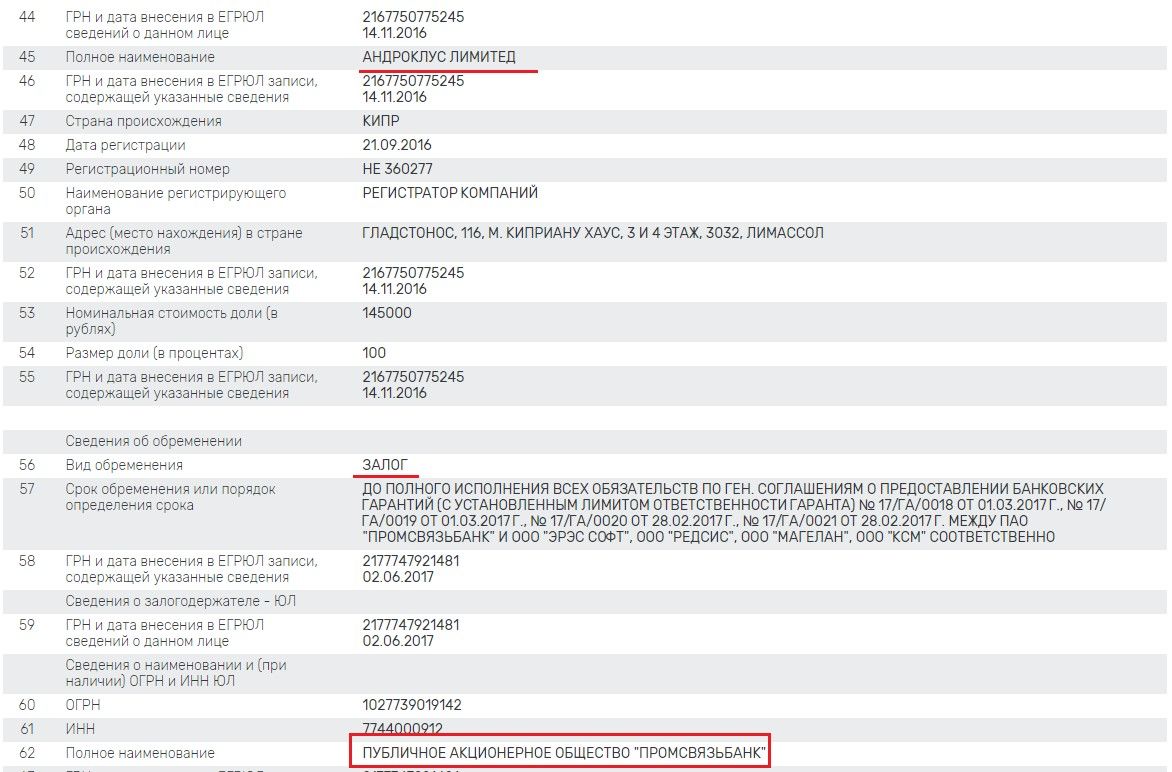 It belongs to the Cyprus offshore company Androclus Limited from Limassol. And it turns out that Promsvyazbank also has it as collateral. But the name Androclus Limited, you can say, nowhere really shone. Another possible feeder of the Ananyevs, which has not yet come under the investigation's sights?

Meanwhile, supervision of the bankruptcy procedure was introduced in relation to Teligent only in the summer of 2020, already under new head of the PFRF Maxim Topilin. Could the bankruptcy be handled by people who were considered beneficiaries of Redsys - Vasily Vasin and Sergey Gordeev?

Why them? Because they are very similar to the "hands" of the Ananyevs who remained in the country. At that time, as the "heads" escaped abroad. They, according to rumours, are responsible for the bankruptcy of the company "R-style", which previously, according to the former owner Vyacheslav Rudnikov, was simply "taken away". The Moscow Post previously wrote in detail about Vasin and Gordeev, Redsys and their connections with the Ananyevs.

However, Teligent itself does not have a single state contract with the PFRF. What can not be said about another office - the founder of CSM LLC- Magelan LLC. Which has orders from the PFRF - 4.5 billion rubles. And another 200 million - with IIC. And this, it seems, is another large feeder, which could be "pumped up" with money by Drozdov, Ivanov and Rudnikov due to the Ananyevs. 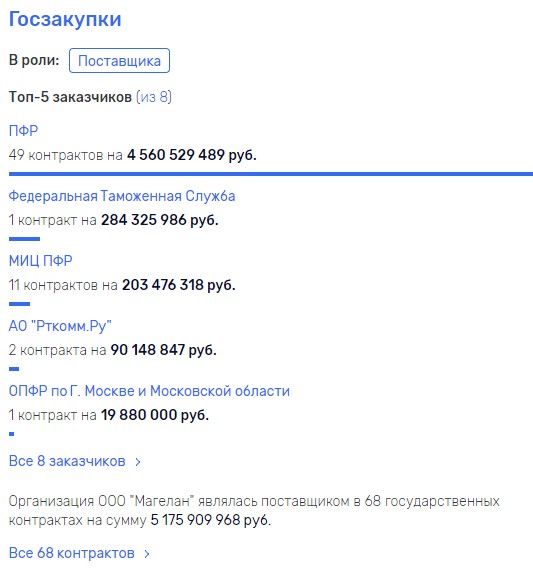 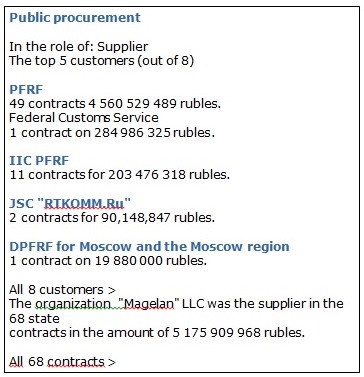 Don't be surprised - it was also bankrupt. And also at the very beginning of 2020 (January 20) - that is, when Anton Drozdov resigned amid a loud corruption scandal with his Deputy Ivanov. They were in a very, very hurry to eliminate everything that was possible. And the money of Russian pensioners - to offshore companies?

At the same time, apparently, they were a bit late with Magelan. Assets worth 367 million rubles remained on the company's balance sheet. This is at a loss for 2019 of 63 million rubles. But how and why to bankrupt a company that has such a large amount of property at its disposal?

Until 2018, the founder of Magelan was another company - CMC LLC, from which Magelan was later formed. Now it has also been liquidated. It can be assumed that those persons who could steal through the PFRF (without taking into account this possibility for the Ananyevs themselves) almost managed to close all the offices allegedly connected, but not yet highlighted, like Technoserv or Redsys.

To trace how money could be withdrawn, again, is not so difficult. Returning to CSM, the graph of financial statements presented on the Rusprofile service clearly shows a sharp drop in profits in 2018 - when the Ananyev scandal broke out. But why do these companies still not appear in news reports and press releases of investigative agencies? 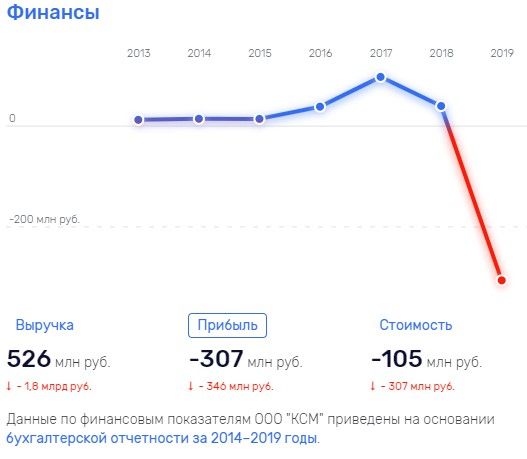 Meanwhile, we may very soon hear about them not only from the pages of The Moscow Post. The alleged sending of Yankin and Rudnev to the detention centre is most likely a prologue to new high-profile statements.

And if the Ananyevs have long been able to drink juice on the beach of a tropical island, then these comrades did not manage to escape. And will Anton Drozdov be able to escape if a thick thread from Ivanov, Rudnev, Yankin, Vasin and Gordeev (suddenly) leads to him?