Dmitry Rogozin may be returned to the party work, but it is a big question whether he will bring more benefit there than as head of Roscosmos.

As the correspondent of The Moscow Post reports, the Fair Russia (Spravedlivaya Rossiya) party may unite with small parties for the State Duma elections in 2021. The following ones are indicated among them: For Truth (Za pravdu), Patriots of Russia (Patrioty Rossii), Party of Pensioners (Partiya Pensionerov), and, perhaps, the key one - the right-wing party Rodina.

It is the latter one that can become the foundation for a new party structure based on the Fair Russia. And its founder and moral leader was, and still is, the CEO of Roscosmos, Dmitry Rogozin. Now he and the state corporation under his leadership are being sharply criticized. Going into politics can be a salvation for Rogozin's reputation – and solve the problem of replacing the aged and unpopular Sergey Mironov.

In the 2016 State Duma elections, his party won just 6.2% of the vote, winning 23 seats. This is much less than they, their voters, and officials from the Presidential Administration expected. A weak Fair Russia creates risks for the party system. To develop, it needs new faces. Even if it is a well-"forgotten" face of Dmitry Rogozin.

Dmitry Olegovich's departure to party work was discussed with renewed vigor after the November criticism of Roscosmos by Russian President Vladimir Putin. This was written by Lenta.ru. After such situations, they usually resign themselves. But the appearance of Rogozin in the State Duma may be harmful. According to detractors, he is allegedly too unreliable in political terms.

This is what his entire biography says. Few people know, but Rogozin started as a journalist. In 1986, he graduated from the International Department of the Faculty of Journalism of Moscow State University. Two years later, he graduated from the Economics Department of the University of Marxism-Leninism under the Moscow city Committee of the CPSU.

And in 1996, Dmitry Olegovich defended his PhD thesis on a topic related to the right-wing patriotic movement. Such a Marxist-Leninist appeared. And between these seven years – a whole chasm of political evolution of the current head of Roscosmos. After all, there was a "Democrat" between "Leninist" and "hooray-patriot". And what a Democrat: Rogozin came under the Russia’s White House besieged by Yeltsin on the side of the "reformers", and stood there at the head of a group of volunteers.

He even managed to perform on the balcony after Yeltsin, Rutskoy and Shevardnadze, and then, as Rogozin himself said, refuse the flattering offer of the RSFSR foreign Minister Andrey Kozyrev to become his Deputy. Regnum wrote about it.

Old-timers know who Andrey Kozyrev is. It is enough to say that the former Minister, after the end of his term, quickly moved to permanent residence in the United States, handing over everything possible in his country. And it was the victory of Yeltsin, who was so zealously supported by Rogozin, Kozyrev and other characters, that became the point of no return in the fall of the USSR. And now Rogozin is shedding crocodile tears over his former power.

As a result, it is very difficult to talk about any political consistency and integrity of Dmitry Olegovich. But his mid-noughties political ads speak for themselves. In one of the election campaigns for the State Duma, the headquarters of Dmitry Rogozin's Rodina "came up with" the slogan "Let's clear Moscow from waste". However, it is difficult to understand from the video what (or who) Rogozin specifically meant by "waste".

Due to the current legislation and our own moral guidelines, we will not provide videos of this sensational adadvertising here. It can still be found online today. Let's just say that it could be understood ambiguously in the context of relations with citizens of other states working in Russia.

It is important to note that even in his youth, Rogozin could not embark on an independent political "flight". Initially, he joined General Lebed, and then Yuri Luzhkov. But in the end, the election itself. In 1997, Rogozin was elected to the State Duma, where he served two terms. It was said that he simply "tricked" his patrons, hoping to become a political heavyweight on his own. But it didn't work.

In autumn of 2004, Rogozin unexpectedly changed the name of one of his organizations, the Rodina people's patriotic union, to a party with the same name. At that time, political scientists joked that since Rogozin was born on the same day as Stalin himself, he had been wearing the jacket of the Savior of the Motherland since childhood.

At the same time, Rogozin still continued to juggle with hooray-patriotic rhetoric. So much so that, according to rumours, he even went to support the Kiev "Orange revolution" in 2004, considering it a patriotic revolution. How much "patriotism" there is in all this, and what such "patriotism" is worth – just take look at today's Ukraine. 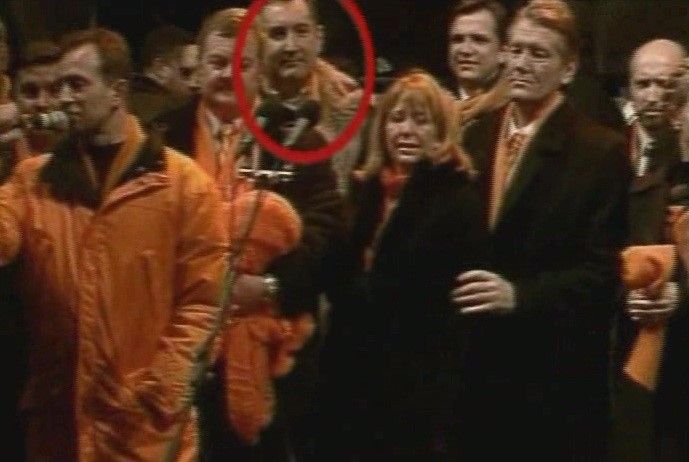 Rogozin on the Maidan during the orange revolution. Disputes about whether this photo is authentic, or an installation, are still ongoing. Published on the KPRF party website

Apparently, Rogozin did not care about the fact that such visits to the Maidan could bring political damage to Russia itself. Nor did he care that the Ukrainian radicals who stood on the Maidan in 2004 once shed a lot of blood of our soldiers in Chechnya. But no one "accepted" Rogozin in Kiev, so he returned to Russia.

Later, in the State Duma, he rose to Deputy speaker, and during this time continued to fly to Brussels and to the United States and as a representative of Rodina. And there he continued to operate the word, and at the same time - "operate" financial resources.

According to Life, a document of the US Department of Justice was at his disposal, in which a well-known American lobbying firm allocates $175 thousand for the visit of the leadership of the Rodina party in the United States. According to this document, the visit was to take place in October 2005 and its purpose was to be a series of meetings with members of several congressional committees from both parties. 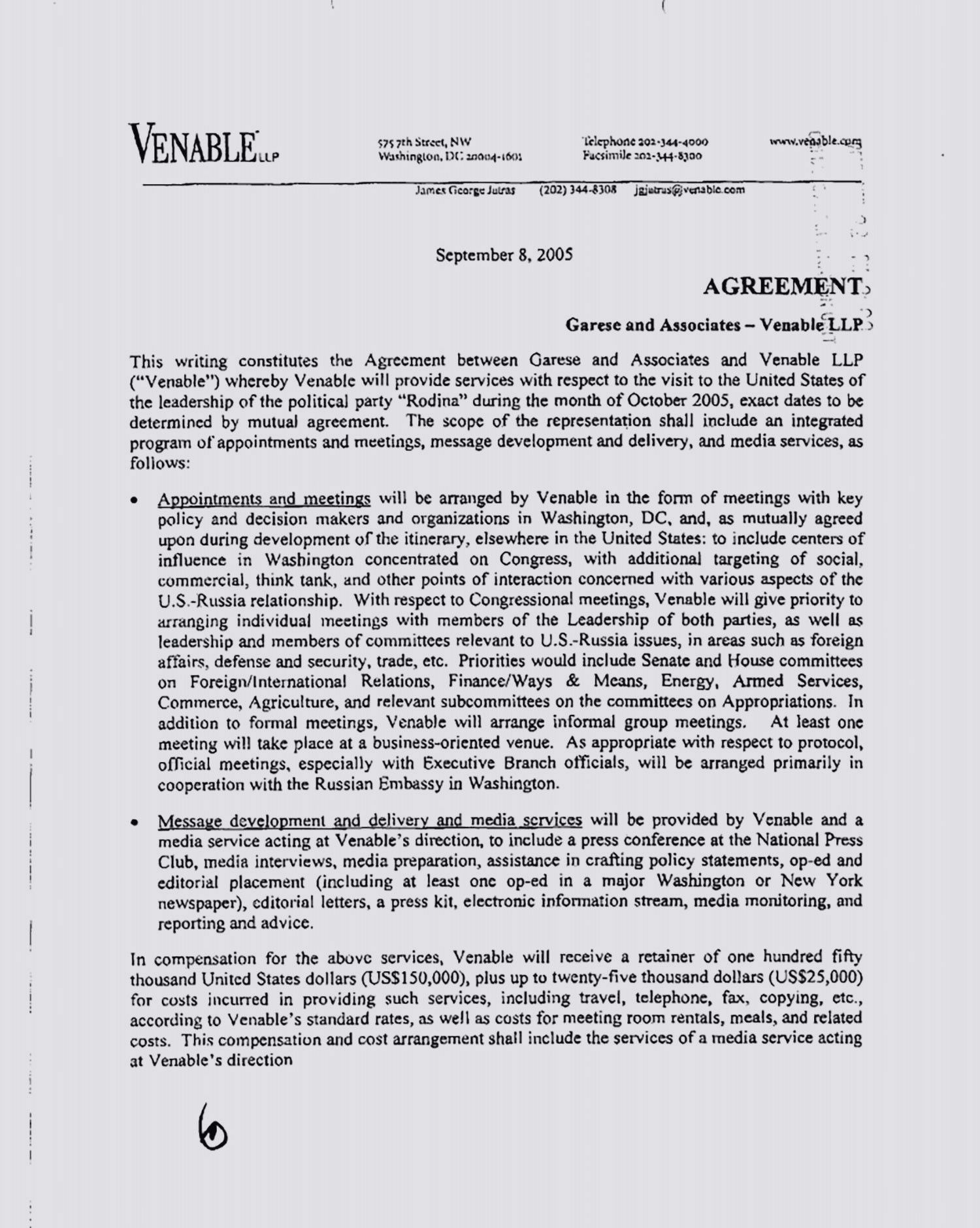 It is not known for certain whether that visit took place or not, and how much it could cost. How and where Rogozin could take that kind of money is unknown as well – was it from party funds?

At the same time, Dmitry Olegovich remained a very conflicted person in the political sense at this stage of his career. He also had contradictions with members of his party. First with Sergey Glazyev, who was nominated for the post of President of Russia. Then Rogozin, in spite of Glazyev, began to support Vladimir Putin - apparently, he did not want the authority of the alternative party "boss" Glazyev to grow.

Later, Rogozin came into conflict with another prominent party member, also allegedly of pseudo-patriotic beliefs - Sergey Baburin. After that, the Rodina faction split, and Baburin took the post of Deputy Speaker from Rogozin. Regnum writes about this.

All this could be the result of an irrepressible thirst for popularity and real power, which had previously eluded Dmitry Rogozin. Later, he was given a chance to prove himself as Deputy Prime Minister, and now CEO of Roscosmos. You know how he did it. But we strongly doubt whether it will be possible to justify the trust of voters if he manages to enter the Duma in 2021.