Moscow Deputy Mayor Natalya Sergunina, according to a source from The Moscow Post, could organize a whole family row to provide relatives with government orders and withdraw money to Cypriot firms.

As the correspondent of The Moscow Post managed to find out, the Moscow deputy mayor Natalya Alekseevna Sergunina, according to a source from The Moscow Post, allegedly may be associated with several Cypriot offshore companies, where Russian, including budget money, is potentially withdrawn.

From Russian to Cypriot and moreover here VEB

The interlocutor of the publication writes that a certain Cypriot named Aaron Elizer Aronov, who lives in Austria, allegedly is in fact none other than the Russian businessman Lazar Telmanovich Safaniev, who changed his name, who is the husband of Irina Safanieva (before marriage Sergunina) - the younger sister of Natalia Sergunina. So his affairs - logically, can be the affairs of Ms. Sergunina.

Safaniev left his assets a couple of years ago. He owned Jen Ventures and Gene Ventures. The co-founder in both was the former head of the Presidential Administration of the Russian Federation Voloshin Alexander Stalievich. He still owns these firms.

By the way, trying to find confirmation of this information, we came across another interesting connection. It turns out that Jenum Ventures, through its subsidiary structure Profilium, is related to VEB.Venchurs (the structure of the state corporation ВЭБ.РФ also owns Profilium) and one of the largest construction companies in Moscow, Monarch (the connection is identical).

The latter belongs to Sergei Ambartsumyan, who was previously the deputy of the current State Duma deputy Vladimir Resin, who in the past changed many positions in the Moscow government. Including having managed to be deputy and Luzhkov and Sobyanin and even a little "steer" Moscow as acting mayor.

But let's go back to Mr. Aronov-Safaniev. According to a source from The Moscow Post, he allegedly owns Mercury, a company engaged in the purchase of Moscow real estate and which has offshore Florestar Management Limited as a shareholder.

Florestar Management Limited, according to the source, is owned by two companies from the British Virgin Islands. He calls Upington and its co-owner British Balkan Consulting Limited, the ultimate beneficiary of which is allegedly Mr. Aronov.

We found Mercury, which was owned by offshore Florestar Management Limited. According to the Unified State Register of Legal Entities, now the owner of Mercury is the Turkish EMASE INSHAAT TOURISM TIJARET LIMITED SHIRKETI.

A certain Sonja Olga Yurievna is listed as the director of the company. Perhaps par, because there is no other business behind it. At the same time, the former owner of Mercury, Kukurudzyak Alexei Nikolaevich, previously owned the Thaw company, which received contracts from VDNKh and even the Federation Council. 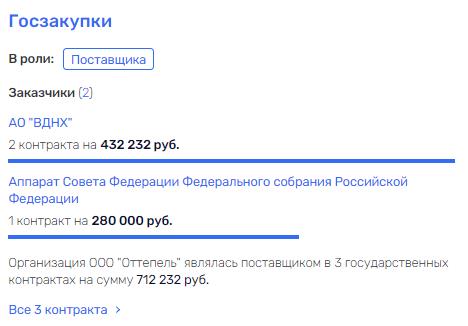 According to Istories.media (recognized as a foreign agent in the Russian Federation), in 2016 the Russian company Mercury received three buildings from Moscow, in which Custos hotels were subsequently opened.

The source also claims that Mr. Safaniev is also the owner of Dita Plaza, where his partners are Natsaev Movladi Abusupenovich (friend of Ramzan Kadyrov - author's note) and Marlene Manasov. The name of the latter is associated with a scandal with an accusation of manipulating shares of RAO UES

Marlene Manasov previously owned a stake in the Jen Ventures already mentioned above.

According to the Unified State Register of Legal Entities "Dita-Plaza" is associated with the "Thaw" by one former founder Tatyana Chalova.

So, in fact, the whole chain and the truth turns out can be looped on Mr. Safaniev. And from it potentially to Ms. Sergunina.

According to Istories.media (recognized as a foreign agent on the territory of the Russian Federation), an offshore Candee Investments Ltd was also registered on Aronov, and in 2016 this company, through Russian companies indirectly belonging to it, participated in the privatization of property of the city of Moscow: moreover, the buildings were delivered to it at a price much lower than the market price.

Vice-Mayor Natalya Sergunina at that time was responsible at the mayor's office for economic policy and property and land relations, in particular, for privatization.

Sergunina is credited with lobbying the interests of many metropolitan developers - from Pavel Tyo, the owner of Capital Group, to the former official of the Moscow City Hall Vladimir Pogrebenko, who, after leaving politics, began to successfully develop Moscow lands for construction projects.

In addition, her name shone in a loud scandal around Colonel Dmitry Zakharchenko. The fact is that it was the structures controlled by Sergunina and another deputy of Sobyanin, Anastasia Rakova, that were customers of firms associated with Zakharchenko and his "business colleague" (meaning taking bribes) Viktor Belevtsev.

By the way, Sergunina in 2018 was responsible for distributing the tender for the creation of parking for 1 billion from the Moscow government and gave the contract to a company whose ultimate beneficiary was the Cypriot offshore company Fuderin Trading and Investments Limited. Kommersant calls it the structure of Capital Group.

It turns out that a person acting close to Sergei Sobyanin can, in fact, sell Moscow plots to firms affiliated with her and withdraw profits abroad through offshore companies controlled by her relative. I wonder if Mr. Sobyanin is aware. If so, does he probably also get some share from such projects?