Money of MIA laundered by "Baikal"

As the correspondent of The Moscow Post reports, apparently, the Ministry of Industry and Trade decided to "put pressure" on one of the main IT specialists of the country Vsevolod Opanasenko through his company Baikal Electronics LLC. Denis Manturov's Department is trying to file a lawsuit for half a billion subsidies, allegedly the company did not deliver Baikal-M microprocessors in time. Such a claim looks like an additional "kick" towards Opanasenko. Only in March, he was released under house arrest, and before that, he served a year in the framework of a criminal case initiated against him for fraud in the supply of equipment to the Ministry of Internal Affairs through his T-Platforms company.

At that time, the prosecution was sure that the delivered automated workstations with the domestic processor Baikal-T1 do not meet the characteristics stated in the contracts. It's funny that now the equipment is working perfectly and the whole situation with landings, criminal cases, unexpected claims looks at least ridiculous.

It seems that someone purposefully hits Vladimir Kolokoltsev's Department through Opanasenko. At first, the Ministry of Internal Affairs and the IT company successfully worked and "spent" budget money. Moreover, apparently, employees of the Ministry of Internal Affairs were repeatedly caught in questionable actions with IT tenders, and some even were under investigation. But everything was quickly forgotten.

It is possible that at some point someone leaked unnecessary information and Opanasenko became a victim.

And the Ministry of Industry and Trade seems to have joined the game and decided to finally stop dubious spending of budget money? After all, if the claim is satisfied, the company Baikal Electronics may fall into bankruptcy. And this will be followed by an additional criminal case for the failure of state contracts again, and law enforcement structures and Government Departments will be left without domestic processors. Or do they not need them at all?

At the end of August, the Ministry of Industry and Trade filed a lawsuit in the Moscow Arbitration court against LLC Baikal Electronics for recovery of more than 500 million rubles due to the delay of the launch of domestic production of microprocessors Baikal-M, for which subsidies were allocated.

As General Director of the company Andrey Yevdokimov noted, the amount of state support for this project was 1.2 billion rubles. And the total cost of developing the processor was estimated at 2.3 billion rubles. The first batch of samples was delayed for more than a year and released in September 2019. However, Andrey Yevdokimov explained this to Kommersant by saying that the product was innovative and it was difficult to name the exact terms of its implementation.

According to Rusprofile, JSC Baikal Electronics was a supplier in 5 state contracts for the amount of 12 million rubles. At the same time, at the end of 2019, the organization ended with a loss of 97 million rubles, and revenue amounted to 199 million rubles.

If the Ministry of Industry and Trade wins the court case, then the company generates an even greater loss and may go into bankruptcy. Isn't that what the Department is counting on?

In addition, based on this processor, work is currently underway to create a software ecosystem around it. In the absence of resources, the transition of Russian companies and agencies to domestic "hardware" will be significantly frozen. Isn't it another criminal case against Opanasenko?

It should be noted that Vsevolod Opanasenko legally divides Baikal Electronics LLC together with Rusnano - T-Nano. 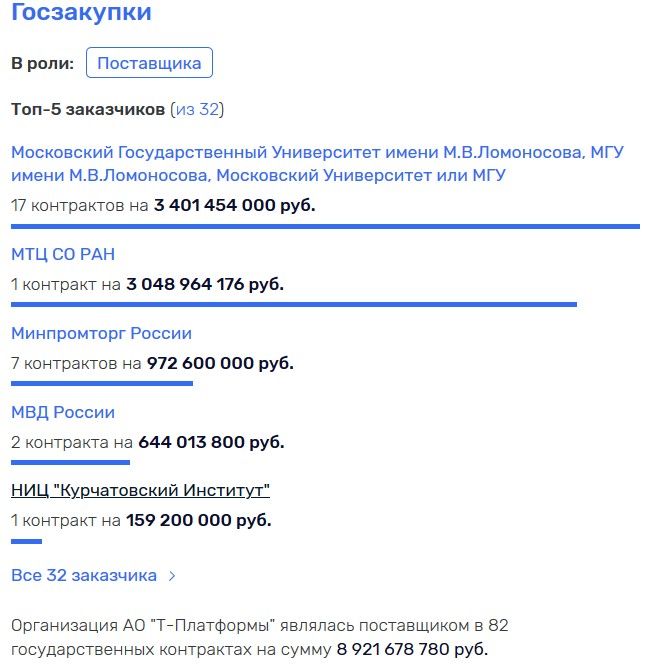 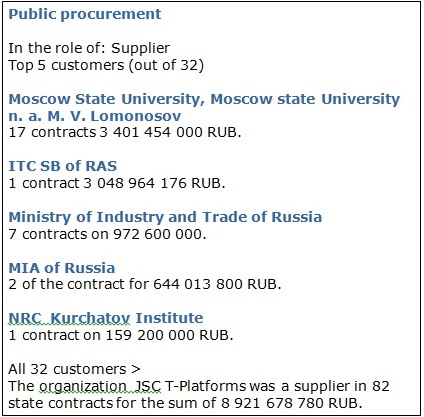 Previously, it had state contracts for 8.9 billion rubles. And now everything is downhill. As if it is being "drowned" on purpose.

In August last year, the Federal Tax Service filed an application to declare T-Platforms a bankrupt. The size of the claims was not disclosed. The court accepted the application in September, but its consideration was postponed several times. In December, the Government discussed measures to improve the financial health of T-Platforms. As one of the options, the transfer of 100% of the asset to VEB's subsidiary NM-tech was considered, as Vedomosti wrote.

The Ministry of Internal Affairs has always been one of the main customers of T-Platforms. However, the work began to rest on some lawsuits, and hinted not at the development of computer technology, but at the money spending.

But all this did not seem to affect further relations, and T-Platforms continued to conclude joint deals.

As claimed by the author of the Kremlevsky mamkoved telegram channel, allegedly Opanasenko was the victim of conflicts between the Ministry of Internal Affairs and the FSS.

Year in a detention centre

Opanasenko was accused of inciting abuse of office (the entrepreneur allegedly decided to get an advantage when concluding a contract and persuaded the former head of the Department of Information Technology, Communications and Information Protection of the Ministry of Internal Affairs of Russia Alexander Alexandrov to help him). He was imprisoned in a detention centre.

According to the state prosecution, the company handed over equipment that does not meet the technical requirements of the Ministry of Internal Affairs. The amount of the state contract (more than 350 million rubles) was classified as damage.

In court, Opanasenko fiercely argued that he delivered more powerful equipment than was specified in the contract. And, by the way, an additional agreement concerning this issue was signed.

Also, throughout the proceedings, he was supported by ombudsman Boris Titov. He wrote letters to the President and asked to check the validity of the criminal prosecution. Alexander Khuruji, the head of the business protection Association, who opposed the criminal case, also came to the court to support the head of T-Platforms. Letters were written in support from the Ministry of Industry and Trade, the Ministry of Economic Development, and representatives of the Russian Academy of Sciences.

Does it mean that now the Ministry of Industry and Trade decided that Opanasenko could not be saved, and therefore decided to take back state subsidies, at least from Baikal Electronics?

Opanasenko spent a year in detention centre before the trial, and he was released under house arrest only in March of this year.

At some point, VEB.RF decided to "drown" the businessman. The State Company filed a huge claim of 1.5 billion rubles for damages. However, the claim was dismissed.

MIA doesn't get along with IT?

By the way, this is not the first case related to the supply of IT to MIA.

In 2018 in the framework of the criminal case concerning the installation of a general intellectual system support activities (ISOD) of the Ministry of Internal Affairs of the Russian Federation detained founder of AT Consulting Sergey Shilov, CEO of NTS Alexey Nashchekin and acting head of NPO Spetstekhnika i Svyaz of the Ministry of Internal Affairs Andrey Nechaev.

In the spring of 2019, the criminal case was dismissed, the investigation and the Prosecutor's office found no evidence of a crime in the activities of businessmen and officials.

And, here's a surprise, just recently it became known that the Ministry of Internal Affairs has re-signed a contract with Shilov's AT Consulting. Does it mean that in Kolokoltsev's Department, employees are not at all vindictive and like to give a second chance?

The Moscow Post has already told his story in its material, as well as other dubious schemes for the "development" of money by employees of the Ministry of Internal Affairs when buying computers through tenders. In particular, about employees of the Administration of Operational Control (AOC) colonels Sergey Burkov and Stepan Uvarov, who were detained for a bribe of 12 million rubles from the entrepreneur Vladimir Shcherbakov.

The businessman, who is engaged through his JSC AST, Tekhnoproekt LLC and NVM LLC, was very interested in getting a state contract from the AOC of the Ministry of Internal Affairs. And allegedly thanks to the collusion of the above-mentioned persons, it was planned to play an auction with conditions specifically for Shcherbakov's company.

Does it mean that the Ministry of Internal Affairs has never been particularly "confused" by questionable schemes related to the supply of equipment? And perhaps Kolokoltsev's office sees a way out of the caused resonance with Vladislav Opanasenko only in finally drowning this business, squeezing the maximum money out of it. Is that why they all pounced?