Mishustin and Khusnullin: who is "building whom"?

Strengthening the hardware capabilities and administrative weight of Marat Khusnullin forces Mikhail Mishustin to take measures to win points from an ambitious deputy?

The day before, an interesting event took place at the Wednesday for Life forum in Tambov: at it, Russian Prime Minister Mikhail Mishustin announced that the country's authorities had relied on low-rise construction as a new locomotive for economic development.

In conditions of economic turbulence and colossal external pressure, implementing even existing resettlement programs from emergency and dilapidated housing is not an easy task. Therefore, the statement on low-rise construction looks more like populism without clear sources of funding.

What pushes the Prime Minister to the actions unusual for him earlier, namely such populist statements, the correspondent of The Moscow Post understood.

Let's immediately move on to the essence: according to a number of interviewed experts, there is only one point in such statements - to get political points in front of the population and identify ourselves in front of large developers. Every year, the Environment for Life forum brings together hundreds of representatives of government, business, architects and specialists in the field of urban improvement, this is a good opportunity to declare yourself.

True, there is no real program of low-rise construction as such, are the sources of financing and so on still incomprehensible? There is only a beautiful idea that most Russians will move to cozy townhouses or individual housing.

According to a number of political scientists, Mikhail Mishustin is trying to intercept the "socio-construction" (so to speak) agenda from his deputy, influential Deputy Prime Minister Marat Khusnullin with such statements. Recently, he has gained colossal administrative weight and can really threaten the power of the Prime Minister.

You can also recall other initiatives (albeit not so populist) that Mishustin demonstratively launched on his behalf. For example, yesterday he personally announced an indefinite extension of the rural mortgage program - the rate will remain at 3%, and the loan will remain at the level of 3-5 million rubles. Interestingly, the program was planned to be completed this year. 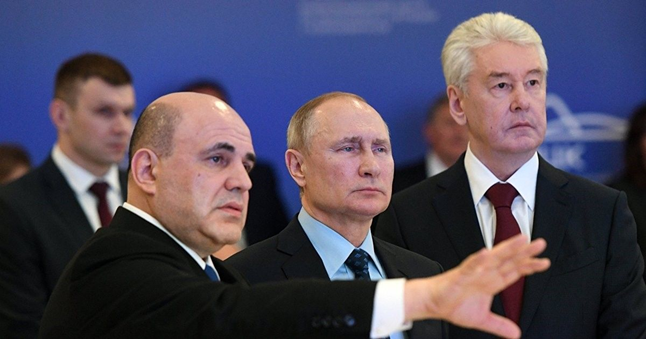 In the struggle for the attention of the President and society, Mishustin and Sobyanin lost sight of a serious competitor? Photo: sevastopol.su

Earlier, Mishustin preferred to delegate this to the deputies, limiting himself to general meetings of the Government and personal reports to the President and Parliament.

The first after Sobyanin

It's no secret that construction deputy prime minister Marat Khusnullin has become a largely imposed figure for Mikhail Mishustin. For a long time, it was believed that Mishustin's main hardware competitor was Moscow Mayor Sergei Sobyanin, who allegedly did not even hide the prime minister's, or even presidential ambitions, and it was he, Sobyanin, who was expected at the head of the Government at the end of 2020.

However, the President relied on executive technocrat Mishustin. Therefore, there was a serious "termination": serious players from the team of Sergei Semenovich were delegated to Mishustin's Cabinet of Ministers in order to balance the hardware defeat.

One of them, and in the end the most influential, was the former deputy Sobyanin Marat Khusnullin. A native of Tatarstan, he still built a whole system of power and influence in his region. After moving to Moscow, a significant part of his team also reached for him, as well as the construction companies allegedly unfriendly to him. Earlier, The Moscow Post repeatedly wrote about Husnullin.

The other "Sobyanin" players on Mishustin's field were the Minister of Economic Development Maxim Reshetnikov and a number of other figures. But Khusnullin stood out against their background by the presence of resources: in fact, in just a year he "crushed" the lion's share of the social agenda related to construction, housing resettlement and related budget flows.

Meanwhile, the last two years, the attention of analysts was riveted precisely to the correspondence confrontation between Sergei Sobyanin and Mikhail Mishustin on the field of the covid agenda. The situation was covered in detail by The Moscow Post.

It should be noted that Mishustin won this struggle for the image of a people's manager. The reasons are banal: Mishustin could speak for the whole country, and any measures of social support for the population at the federal level automatically worked for his benefit, even if he himself was not their initiator.

Sobyanin, on the other hand, was forced to face the most difficult epidemiological and social situation - his area of ​ ​ responsibility is the densely populated capital, in which the infection raged the most. Both business problems and acute criticism of Sobyanin's officials for the ineffective organization of quarantine and restrictive measures are associated with this situation.

One of the points of tension was the famous Sobyanin application "Social Monitoring," through which they tried to track the activity of citizens outside their homes, and at the same time issued serious fines for violations. The salt is that the development of this application alone cost more than 200 million rubles. And given the constant scandals with fined Muscovites, the anger of indignation poured directly onto the Moscow mayor.

Marat and Mikhail: an unsweetened "couple"

At the same time, Marat Khusnullin escaped criticism following the results of the post-covid period. On the contrary, the rapid construction of antique hospitals in a number of regions was credited to him.

But back in 2020, Khusnullin made a resonant statement: the Deputy Prime Minister proposed to scale the Moscow renovation of housing throughout the country. According to him, this will require huge money, and many other resources. Even later, Khusnullin advocated reducing the number of Russian regions by enlarging them for a more equitable distribution of budget resources. Writes about this "Kommersant".

These statements are extremely significant because they were made by him in his personal capacity, without regard to the current and former leaders, Sobyanin and Mishustin. And these initiatives concern, in fact, the entire country, the entire construction complex. It's just that no one rushes with such words.

It was then that it became obvious that Khusnullin was playing his game. More precisely, his words were attributed to the influence of Sergei Sobyanin. But today it is clear that Khusnullin himself breaks away from Sobyanin - and very quickly.

Confirmation that Khusnullin is in good standing with the President and the elites may be his trips to the liberated Donbass, where a special military operation of Russia is taking place. Together with other persons, Khusnullin visited Donetsk, Mariupol and a number of other territories, where he essentially committed the Russian government to help restore the destroyed. "Komsomolskaya Pravda" wrote about the visit of the Deputy Prime Minister.

And again - no one will just highlight themselves - and this is hardly possible without an approving nod from the Presidential Administration. Given the importance of the topic, Prime Minister Mikhail Mishustin remained on the sidelines of the entire agenda related to the SVO.

This plays to reduce its recognition, and the hardware weight. While the deputy head of the AP, Sergei Kiriyenko, and his own deputy, Marat Khusnullin, are all glowing on TV screens, the Prime Minister is forced to carry out a lot of viscous technical work in the Government. The negative for economic problems is also on it.

Khusnullin, meanwhile, received new administrative levers - he was given supervision over Rosreestr. This gives him the opportunity to influence business processes and enlist the support of a number of entrepreneurial elites.

Soon after, he instructed the Federal Property Management Agency to work out the procedure for seizing the property of federal institutions to the treasury without coordination with the relevant ministries. That is, in fact, bypassing Mishustin and his people in the ministries. This may affect over 13 thousand state institutions, whose land plots can be redistributed in favor of large development structures. For the support of Marat Khusnullin, of course.

In parallel with this, Khusnullin is engaged in the topic of road construction. Now the state-owned company Avtodor is preparing for reform, an important part of which will be the issuance of bonds for some projects. Similar "gestures" of Khusnullin can be found in other areas. 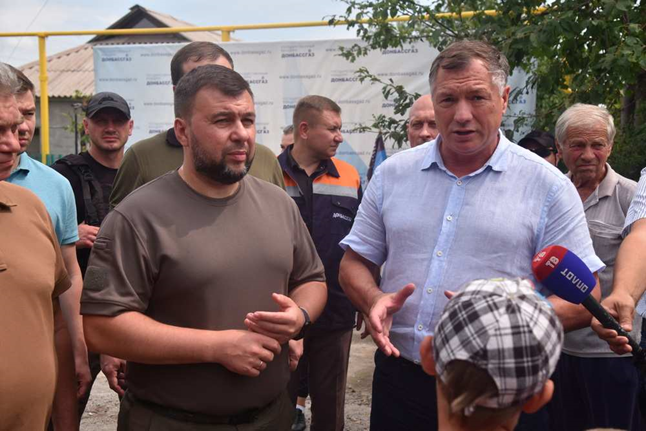 Marat Khusnullin (right) and the head of the DPR Denis Pushilin. Photo: rusvesna.su

Mikhail Mishustin cannot but understand: many still perceive him as a technical prime minister, although in fact he is not. And by the end of 2022, it will be possible to hang a negative from economic problems on someone. And in this case, alternatives to him, except for Khusnullin, are not yet visible.

That is why, in terms of competition, Mr. Mishustin has intensified in terms of participation in various forums and other platforms, where he presents federal programs and gives out promises. But what if the President, as always, has his own vision of the situation. And instead of Mishustin with Khusnullin and Sobyanin, a completely different person will go to the Premiere? However, such a prospect is not a reason not to work.