Another scandal due to Oleg Shein may threaten not only his exclusion from the Party, but also the complete loss of the prospects of Fair Russia in the upcoming elections.

As the correspondent of The Moscow Post reports, the State Duma Deputy from the Fair Russia Oleg Shein, whom the majority of voters know, except that, according to the noise in the media, was noticed in deceiving his colleagues in the Duma. And it is quite "on time": now it is being decided whether the scandalous politician will be nominated to the next convocation of the State Duma. However, he may not make it to the elections — there is such a scandal that Shein's colleagues may raise the question of depriving him of his mandate.

Back at the end of February 2021, the Astrakhan Deputy said that they were going to demolish 2 thousand residential buildings recognized as emergency in Astrakhan at the same time, and the residents would be literally put out on the street.

Of course, such a statement caused a real surge of concern among the residents of Astrakhan, to say the least. Such mood simply could not but cause a rise in housing prices. There were allegedly "well-wishers" who went to the apartments and foreshadowed the imminent housing and utilities apocalypse, which caused unauthorized gatherings.

However, apparently, Shein's words were just a PR attack on the current head of the region, Igor Babushkin. Shein has never hidden his political ambitions, and is a sacred thing to tarnish the image of a political opponent before the State Duma elections. However, the information must be given truthfully, as it can go sideways.

It happened like that. In March, a special commission of the Housing and Utilities Reform Fund found out that Shein's statement was not true. According to the authors of the Boilerroom telegram channel, allegedly at the same time, the Duma commission allegedly came to the conclusion that the activities of the Astrakhan "social revolutioner" are not aimed at protecting the interests of voters, but represent a blatant provocation.

In view of this, insiders predict that now Oleg Shein may be deprived of his mandate. For Shein, who should have many interests tied to him both in Moscow and in Astrakhan, this is a disaster. Previously, he demonstrated the skills of an avid politician: he changed the rhetoric in time, attracted the right people to work in the local party cell and got rid of them in time.

But now there is a whole trail of scandals behind him, and political balancing will not save this time. The only thing that the general public in Russia knows about Shein is the hunger strike in 2012, when the politician did not agree with the results of the election of the mayor of Astrakhan. He was nominated, and lost, and instead of dealing with the affairs of the voters, he decided to arrange a performance.

Then, we recall, the scandal reached the federal level. The Head of Fair Russia, Sergey Mironov initiated a check of all the circumstances of the hunger strike of Shein and his supporters, the purpose of which was then called the cancellation of the results of the election of the mayor. As a result, it turned out a lot of noise out of nothing - the elections were approved, and Shein, clearly not wanting to seriously part with his life, stopped the hunger strike.

In July 2019, the President replaced Sergey Morozov with Igor Babushkin as a possible candidate for the election. Fair Russia also wanted to participate. However, at the end of the same month, the Fair Russia Regional Branch nominated Oleg Shein as its candidate - despite the fact that he did not receive any support from the federal presidium of the Party and permission for this nomination.

According to the Vybor Naroda, the central Office of Fair Russia said that Shein's candidacy was not even discussed. In fact, Shein was trying to put the issue itself to a vote, even though it was not initially put on the agenda at all.

It seems that Shein, who did not achieve the post of mayor of Astrakhan in 2012, really wants to lead something. And if it didn't turn out to be a city, then why not have a try in the region? And this is despite the fact that it is unlikely that at least one out of ten residents of the Astrakhan region will be able to tell what their representative Shein has achieved in the parliament, what does he do there at all?

The case of the nomination is painfully reminiscent of a gross violation of the Party discipline. Earlier, due to an unauthorized "campaign to the elections" with the active participation of Oleg Shein, the local "social revolutionary" Alexander Mikhailov was expelled from the Party. Shein probably doesn't want to repeat his fate, but apparently, the thirst for power is blurring his eyes.

Then, in 2019, this scandal caused a lot of damage to Fair Russia. After Shein's nomination, Alexander Tarnavsky, a member of the council of the Party's Moscow branch, accused the Party of "leaking" an entire list in the Moscow City Duma elections. In St. Petersburg, for the election of the governor, the social revolutionaries, we recall, nominated the niece of their leader Sergey Mironov, who did not comment on the behavior of the Party members.

Though Shein's initiative was commented on. After the scandal with the "nomination", a member of the Council of the Astrakhan Regional Branch of Fair Russia, Galina Morozova, appealed to the Party leader Sergey Mironov with a request to consider the exclusion of the head of the regional branch of Fair Russia, Oleg Shein, from the Party.

According to her, because of his actions, the Party's popularity is being decreased, and Mr. Shein himself is not a "team player". Earlier, Ms. Morozova, like Oleg Shein, put forward her candidacy for the election of the governor of the Astrakhan region. Her words are quoted by Kommersant.

At the same time, Shein is not a weirdo at all. Apparently, he has such a tactic of attracting attention to himself - a scandal that must necessarily reach the federal level. Another high-profile case with Shein occurred in 2013, when he somehow ended up in Moscow and took part in a stabbing.

Moscow police have detained a 21-year-old woman on suspicion of assaulting the chairman of the Astrakhan branch of Fair Russia Oleg Shein and a young man. Everything happened in one of the apartments of the house 3 on Bolshaya Sadovaya Street. A young resident of the Chelyabinsk region inflicted non-penetrating stab wounds on her victims. As a result, Shein was hospitalized at the Sklifosovsky Institute and underwent surgery. Meanwhile, the leader of the "social revolutionaries" Sergey Mironov said that Shein was stabbed three times, and wondered if the attack was "greetings from Astrakhan". This was reported by NTV.

Although it was not a greeting at all - it looked like an ordinary domestic conflict, which could have ended worse. But why does Shein get involved in such ugly stories?

Perhaps, because they try to attribute to Shein the acquaintance with many criminal authorities in the Astrakhan region, whose interests he allegedly puts above the interests of his own voters.

Tell me, who is your friend?

According to Ast-news.ru, persons with criminal records surrounded Oleg Shein for decades, throughout his entire parliamentary career. Having appeared with him side by side immediately after the start of the political activity of the oppositionist, they remain close to this day.

For example, a member of the council of the regional branch of Fair Russia in the Astrakhan region, Galina Morozova, twice, in 2016 and 2017, was nominated on the lists of FR to the regional Duma. And then she ended up in jail on suspicion of murdering her own son. 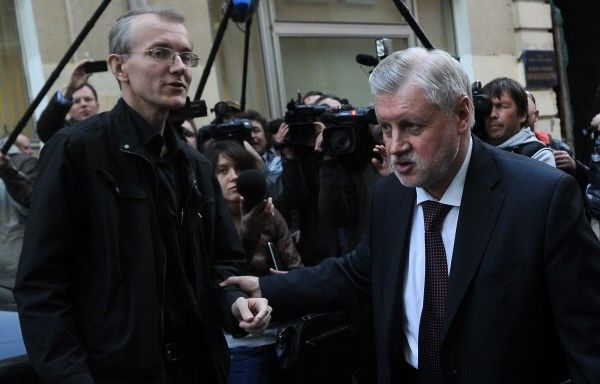 They also recall Irina Mentorina, who was nominated by the FR branch under the leadership of Shein in these elections to the City Duma in 2020. Already during the election campaign, it became clear that she was convicted under Part 1 of Article 241 of the Criminal Code of the Russian Federation – "Organization of prostitution". As the investigation established and the court confirmed, together with the accomplices, the favourite of the local social revolutionaries was engaged in renting saunas and apartments for relevant events, collecting money from the workers of this industry. This is also written by Ast-news.ru.

The closest associate and assistant of Shein, Anatoly Sadikov is even worse. He was an assistant of the opposition politician since the 90s, and in he has seven convictions. Including – for involvement in criminal activity of minors, robbery, theft, and much more, reports the same edition of Ast-news.ru.

In total, in the close circle of Sergey Shein, experts counted at least 12 problematic persons who can be blocked around him to slow down the work of the regional office. At the same time, Shein, having done almost nothing for his voters, continues to perform, hoping that the scandalous situation will leave him at the top of power again.

It is not clear why such a "performance" is necessary for a fading away Fair Russia. With leaders like Shein, the Party doesn’t seem to win more votes than last time - it will be extremely difficult to get into the Duma at all. However, there is possible option of a personnel decision from Mironov, while it is not too late.