The crimes which ex-managers of Legion Bank are accused of may be a drop in the ocean - in addition to possible theft, the Bank may have laundered money obtained in a dubious way. Those who may be involved in this are still getting away with it.

As the correspondent of The Moscow Post reports, the Tverskoy court of Moscow issued an indictment in the criminal case of embezzlement in the Legion Bank, which lost its license in 2017. Four ex-managers of the structure, Viktor Brusentsev, Andrey Batishchev, Dmitry Khaykov, and Mikhail Korolkov, received real terms of imprisonment.

Meanwhile, these individuals could be only some of the real participants in the dubious cases that were going on in the Bank. A number of the Bank's shareholders, whose names were repeatedly mentioned in the context of various scandals, icluding corruption ones, were not under suspicion.

Our sources say that there is a high probability that the four convicts were allegedly made whipping boys, while other Legion beneficiaries could have laundered millions of illegal proceeds from other situations that are not directly related to the Bank's activities.

As the investigation suggests, in 2014, the accomplices issued non-refundable loans to organizations that were actually controlled by them, as well as concluded fictitious transactions and assignment agreements. The damage could amount to about 122 million rubles. However, this figure is probably just ridiculous against the background of the volumes of funds of dubious origin that could be "pumped" through the Bank by those who remain in the shadows now.

Former member of the Board of Directors of Legion Georgy Zaitsev, who owned a 3.43% stake in Legion could be among such individuals. Georgy Zaitsev was one of the co-founders of the well-known NPO Kosmos, whose main activity was the construction of non-residential buildings.

Georgy Zaitsev's partner in Kosmos with a share of 85% was a very scandalous character, Andrey Chernyakov. He also headed the enterprise. Today, Chernyakov is accused of a series of large-scale embezzlement of funds from the Bank of Moscow (now BM-Bank, part of VTB), as well as non-payment of wages to workers from Yekaterinburg who worked for a subsidiary of Kosmos and built the Alabyao-Baltic tunnel in the capital. This was reported by Kommersant. 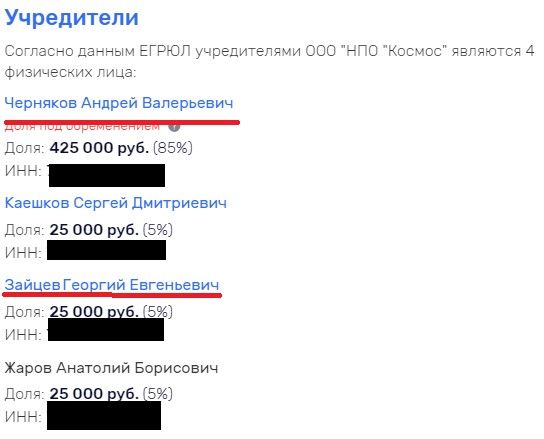 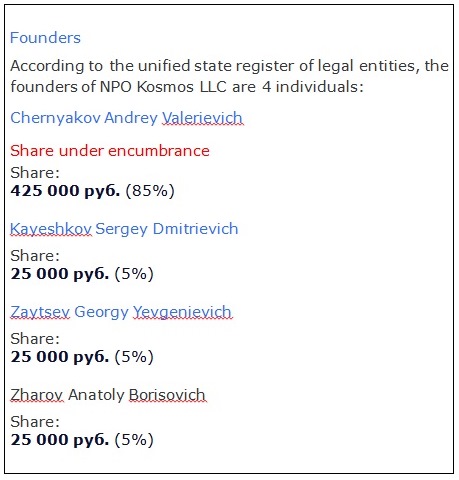 Law enforcement authorities believe that from 2011 to 2012 Chernyakov stole 14 billion rubles from the Bank of Moscow. And the money was just allocated to the NPO Kosmos as a target loan for replenishment of working capital. It is not difficult to assume that later these same funds could be transferred through Legion, which Chernyakov's partner in Kosmos, Georgy Zaitsev, should have known about.

But this is not all. Because the same Chernyakov may be involved in the theft of money allocated for the construction of the Russian Judo Academy - which he is also suspected of. Back in 2011, Chernyakov signed a contract for this construction site with the Russian Judo Academy and the administration of Zvenigorod, Moscow region. According to the investigation, the work envisaged by the project was not completed in full, 28 million rubles were stolen. Kommersant also wrote about this.

If this is true, then the whole situation should have reached Vladimir Putin, who is known to be a judoka himself and subsequently attended the Russian Judo Academy. Moreover, he opened it in 2012. Thus, possible frauds attributed to Chernyakov may endanger the authority of the Head of state, who, as they say, has repeatedly been personally interested in the project to promote this sport in our country.

An even more interesting detail is that another partner in the construction of the Judo Academy was the non-profit partnership called National Union of Judo Veterans. And it is headed by a very odious character, entrepreneur Pavel Balsky, who was highlighted in the story with Amurstal and, as his detractors suggest, can be friends with the Rotenberg oligarchs. The Mosсow Post  repeatedly wrote about his affairs earlier. 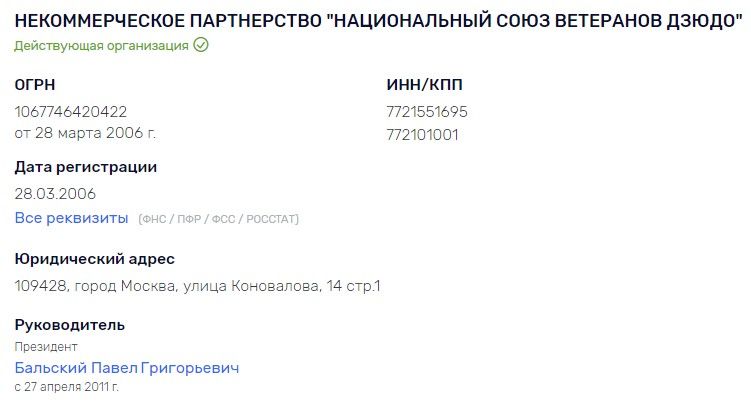 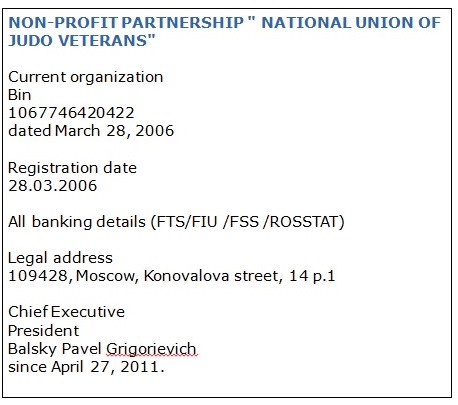 If the money was stolen, it could have been taken abroad. And here the Legion Bank was supposed to help a lot.

According to rumours, the former mayor of Zvenigorod, Leonid Stavitsky, who was supposed to be responsible for part of the project under the city administration, could also appear in the ugly story. However, it seems that he managed to escape from the "blow" - a warm place for the former mayor was found in the Ministry of Construction, Housing and Utilities of the Russian Federation, where he became a Deputy Minister.

Nevertheless, he was also summoned for questioning concerning this case, but Stavitsky did not appear for some reason. This was reported by the REN TV channel. Another detail is that during the acceptance of the Judo Academy, the improvement and landscaping of the territory of the complex provided for in the contract and budget documentation was not carried out.

If low-quality building materials can be difficult for a non-professional to evaluate, then the lack of green spaces and improvement during acceptance should have caught Stavitsky's eye. Apparently, he didn't notice it. Could the official's view be "covered up" by a plenty of money?

The situation is more insulting because of the Judo Academy that was built is, in fact, inactive and is being destroyed. This was written by the Regnum publication, it seems that all the justifications and calculations for the project could be a banal fake to get money for it.

As noted by Deputy Chairman of the City Council of Zvenigorod Nisim Ruvinov, a whole billion was spent on construction, and after construction the complex was disconnected from heat, so it "gets wet". "Everyone knows about the problem, including the Governor", - Ruvinov's words were quoted by Regnum.

And the most "funny" thing is that today Chernyakov, who is accused of so many crimes, is not even in a detention centre - he was released from custody after spending two years in a Polish detention centre. It was in Poland that he was initially detained, and only later extradited. Detractors are already spreading rumours that he may get off with a suspended sentence or even be acquitted. What such a decision might cost him or his possible patrons is a mystery.

Chernyakov found good project partners for his Kosmos. And probably the co-owner of Legion Georgy Zaitsev could be just as good, if not better, for him. Where are the 28 million rubles that were probably stolen, and what structure did they go through? Loose ends.

If Zaitsev was so "clever", then, clearly, he was not alone. Another former co-owner of Legion, whose name was mentioned in the context of corruption scandals, is Dmitry Diakonov, who owned more than 10% of the institution's share. He became known to the general public during a high-profile scandal with the provision of fictitious services to the Khrunichev Centre. At that time, Diakonov was the head of Ekopravo CJSC.

The story happened back in 2014. Investigators opened a case under part 4 of article 160 of the Сriminal Сode of the Russian Federation (embezzlement committed by an organized group or on a particularly large scale). The case was initiated against the former General Director of the Centre, Vladimir Nesterov. This was reported by TASS.

Mikhail Yakushin, the chief accountant of the Centre, and Diakonov, who was mentioned above, with his Ekopravo CJSC were also held there. It is Ekopravo, that, according to the investigation, had allegedly fictitious services.

The firm received 22 thousand euros a month from the Khrunichev Centre, plus 5% of the amounts that reduced the company's losses as a result of its activities. The investigation found that from September 2007 to February 2014, Diakonov prepared and provided acceptance certificates containing false information about allegedly conducted audits and consultations for lawyers of the Khrunichev Centre. In fact, these were not consultations or audits, but papers imitating such documents. It was written by Izvestiya.

However, in the end, Diakonov can be considered to have got off lightly - he received only 5 years, and even then a suspended sentence. Apparently, this is the price of stealing public money (after all, the Khrunichev Centre belongs to the state). And, again, it is curious in which Bank, did the ex-owner of Legion keep funds from such operations, and why did their movement on accounts after paying for legal services not attract the attention of law enforcement officers?

These and other Legion shareholders may have done a lot of damage in the past, but it seems that not everyone was prosecuted. Who knows, maybe the verdict of those involved in a high-profile case will pave the way for investigators and other former leaders and owners of Legion? One thing is clear - it will be extremely difficult to return the money that Legion Bank and its beneficiaries used, and possible participants in the scheme are walking around at large.