In the Tagansky District Court, the trial of the "authority" Timofey Kurgin against The Moscow Post and the newspaper of investigative journalism Nasha Versia ended with a complete victory for journalists.

This process has been going on for half a year. And all these six months the infamous businessman Timofey Kurgin has been making new "tricks", apparently, considering that "might makes right"?

Recall that Timofey Kurgin, better known in "close" circles as Teymuraz, Timur Izmailovsky, as well as Timson, some time ago decided to build up a new "skin", thus cutting off all his dark past. After all, the name of Teymuraz Kurgin was associated with the criminal case of the brutal murder of State Duma Deputy Sergey Skorochkin in 1995.

In total, Kurgin spent almost 7 years in custody, passed a kind of prison "Harvard". Got out. He wanted to live differently, though without changing his own lifestyle. But how to cover up the past?

Numerous unpleasant publications in the press? How to silence investigative journalists? And here, it should be noted, Mr. Kurgin, with the help of hired expensive lawyers, developed a whole "Operation Barbarossa", a kind of blitzkrieg.

But this blitzkrieg eventually crumbled like a rotten stump, although, it would seem, it was perfectly prepared!

Why did Timofey Kurgin lose to journalists? And what conclusions can be drawn from this high-profile trial, which, quite possibly, will eventually enter the textbooks for law students?

The correspondent of The Moscow Post looked into the details.

How Kurgin was looking for a "fire extinguisher"

A lot of interesting things were voiced at these trials, but the most interesting, perhaps, was the last court session on the claim of Mr. Kurgin, which happened on January 22.

And finally, all of us, both journalists and lawyers, heard why Timofey Kurgin was going to court for so long.

After all, we recall that the investigations to which Mr. Kurgin has claims were published in 2016.

According to the lawyer Anton Vorobyov, who defended Mr. Kurgin in court, his client some time ago began to have big problems with foreign banks and foreign partners, because they saw publications about the not very "noble" actions of his client and business partner in the media. 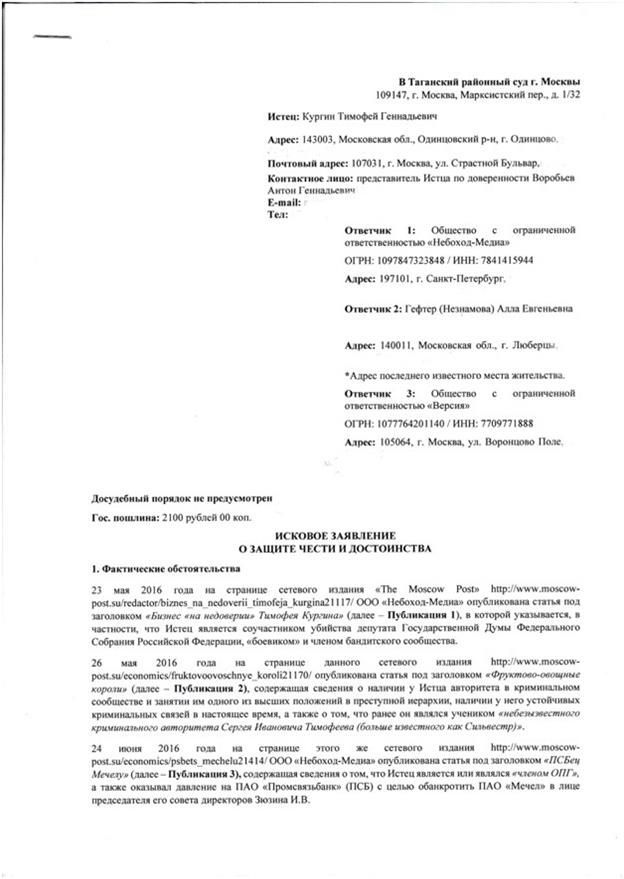 Statement of claim for the protection of honour and dignity 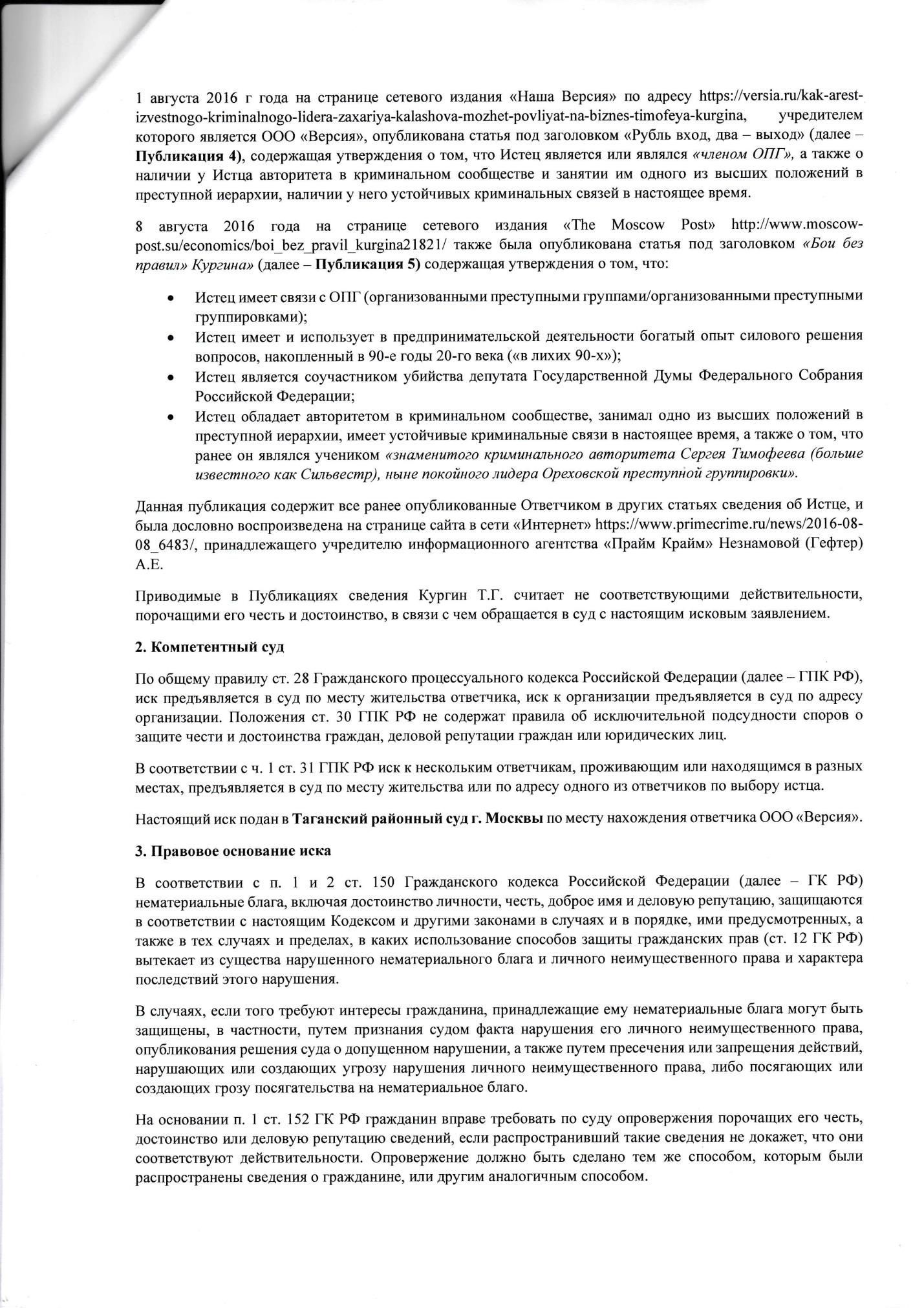 Of course, when the "fire" started, Mr. Kurgin began to look for a "fire extinguisher". In the role of such "fire extinguishers", several "firefighters" volunteered to act at once, such as a well-known lawyer in certain circles, Oleg Popov, a "scandal reporters" with a tarnished reputation, Danila Pashutkin, and a certain phantom man, Ruslan Dzheliev. All of them participated in the preparation of a plan for a lightning war against independent journalists of The Moscow Post and the newspaper Nasha Versia.

But there was no lightning war... And it couldn't have happened! 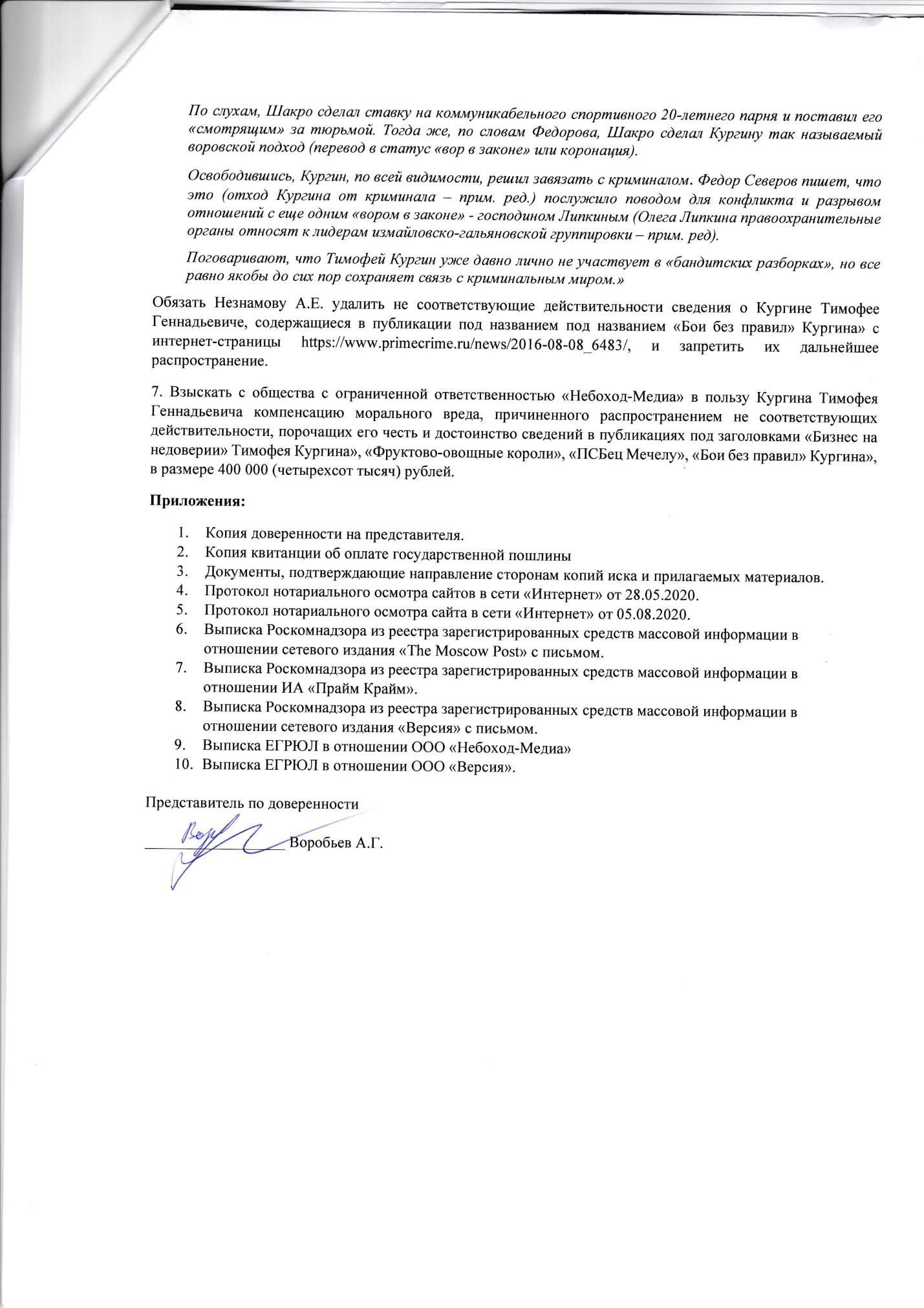 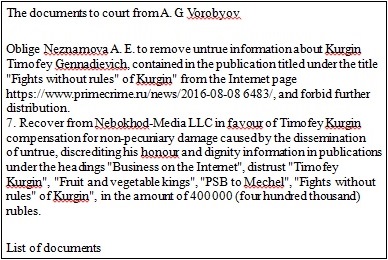 Mr. Pashutkin was terribly embarrassed when he was caught on a banal plagiarism. Lawyer Oleg Popov also stained his lawyer's jacket.

It was the firm of lawyer Popov named A-PRO that offered its client Timofey Kurgin a very specific service: to clean up a badly tarnished reputation with the help of some strange solutions.

They say that a successful lawyer Popov and Co put just a space accounts for these services. But it seems that they promised to clean up the search engines from negative content. They say that they allegedly assured that the client himself would not even show up during the court proceedings. Everything will be masterfully done by Oleg Popov and Co. Danila Pashutkin, a smart "lawyer", was a member of the Co.

It turns out that in the "bag" there was a complete "collection of works" - 38 different publications, which somehow mentioned the "noble" past of Timofey Gennadyevich Kurgin. But publication of these was eventually proposed in a turned state.

And some of The Moscow Post's investigative journalism also ended up on Danil Pashutkin's list. 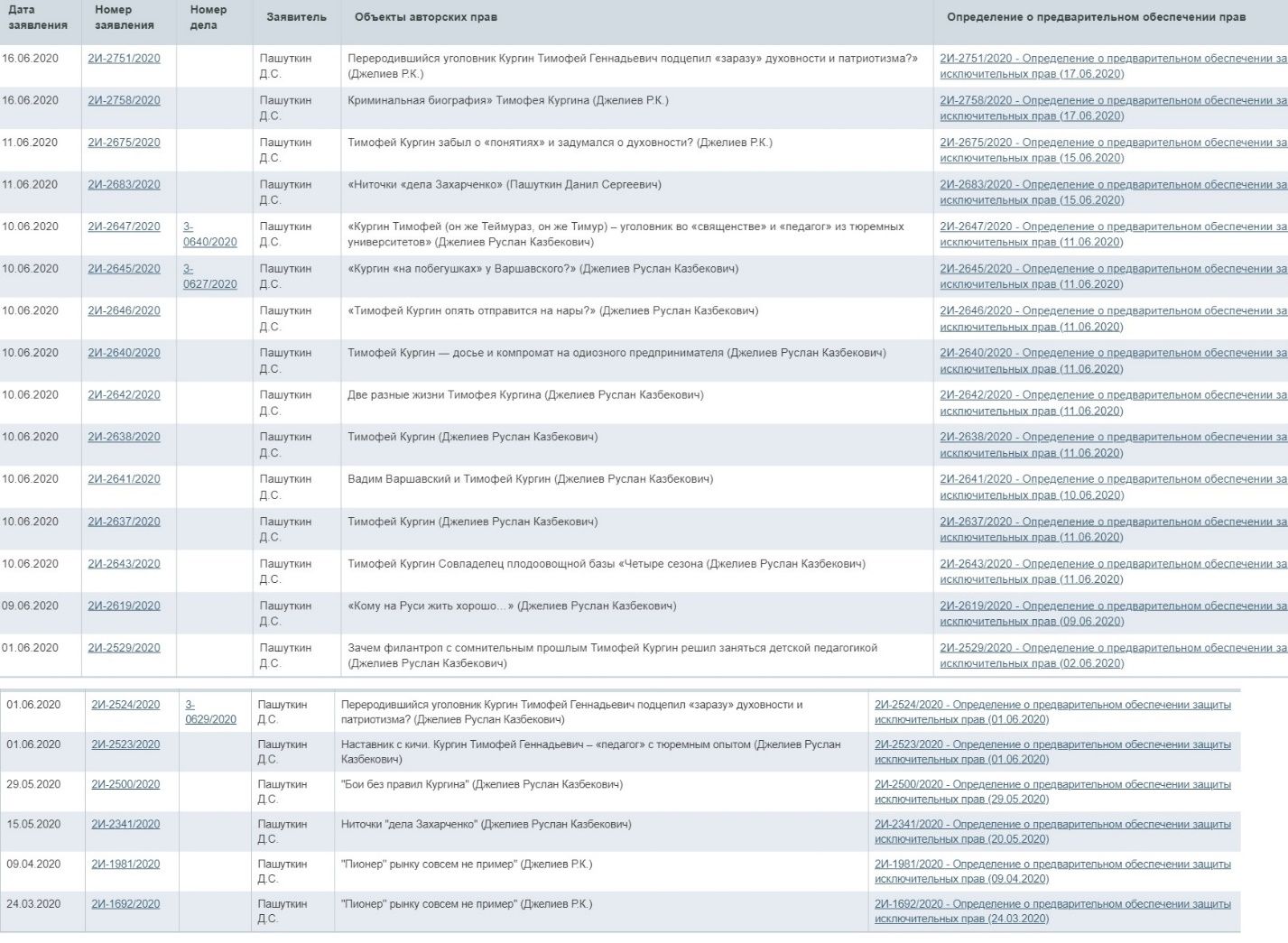 Here is a good example. In February 2020, one of the publications published an article about the Pioneer company, the CEO of which committed suicide. This material was reprinted by another site. But the publication was removed from the site as a result of interim measures imposed by the Moscow City Court, at the request of Mr. Pashutkin. Mr. Pashutkin claimed that he was the copyright holder of the publication.

As a result, it turned out that Pashutkin had several dozen investigations about the "authoritative" businessman Kurgin. 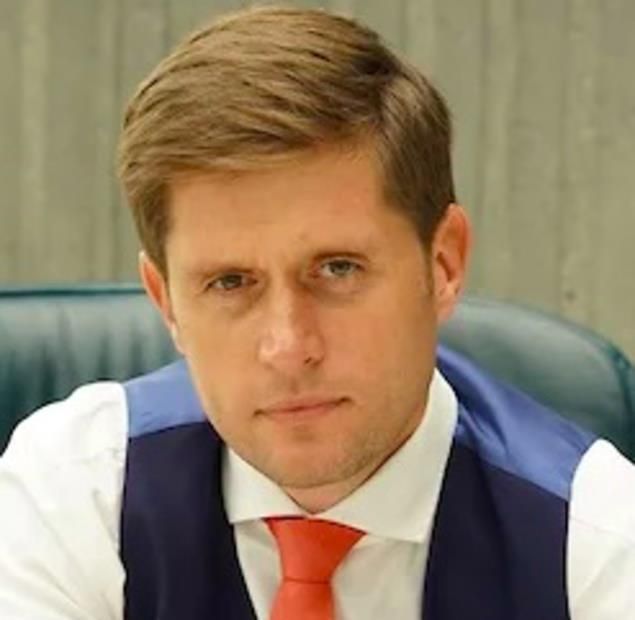 Thus, the scheme, invented by the lawyer Oleg Popov, began to fail at the first meetings in the Tagansky District Court.

It should be noted that the "team" of Mr. Kurgin changed tactics at the November trial. And began, as Alexander Changli, a lawyer for The Moscow Post, noted in his speech, to engage in "deceit", proving that Timofey Kurgin and Teymuraz Kurgin are two completely different people. These statements were made by lawyer Anton Vorobyov.

"But the deceit on the part of the plaintiff should not mislead the court," - concluded lawyer Changli.

The court cooperated with the defense of The Moscow Post, allowing them to request from the Ministry of Internal Affairs and the Federal Penitentiary Service both a criminal record of Mr. Kurgin, and a possible change of names.

Even at the trials, the question of conducting a comprehensive examination was constantly raised. This was hotly insisted on by Mr. Kurgin's defense.

In the end, the examination was refused.

"Surprises" from the archive of the Moscow Regional Court

The Moscow Post lawyers Varvara Kuznetsova and Fyodor Kravchenko prepared a real "bomb" for Kurgin's defenders: they found a half-decomposed criminal case of Teymuraz Kurgin in the archives.

"There were about 40 volumes," Varvara Kuznetsova shared her impressions, "this is what was in plain sight. Perhaps there are many more volumes!"

The case is a quarter of a century: it was 25 years ago that Deputy Sergey Skorochkin was first abducted and then killed. And Kurgin was then found guilty on several counts at once. The case dragged on for a very long time. Then the deadline expired. And Kurgin was released.

But back in February 2002, the Supreme Court in the supervisory criminal proceedings considered this case on the merits, and, according to the file of this production, one of the accused in the case of Deputy Skorochkin could be none other than Teymuraz (Timofey) Kurgin. He was charged with three counts at once. 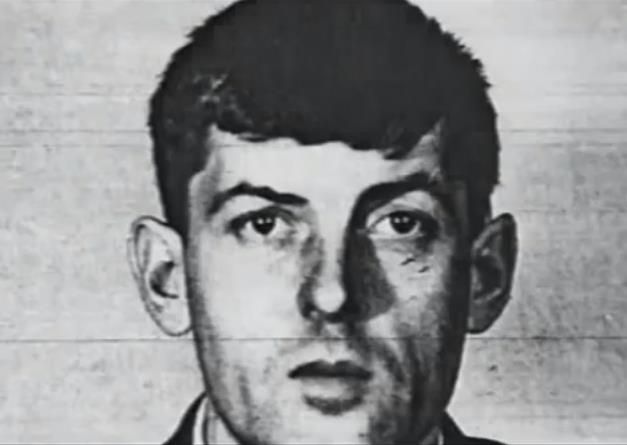 The defense of Mr. Kurgin, represented by lawyer Vorobyov, clearly did not expect such a "surprise" from the past. they were confused for a while. But coming out of the confusion, lawyer Vorobyov, as always, firmly stated that this could not be real: Timofey Kurgin was never in the role of the accused.

However, the Tagansky District Court agreed with the arguments of the defense of The Moscow Post and asked the Moscow Regional Court, which was engaged in the kidnapping and murder of Deputy Skorochkin, materials on this criminal case. 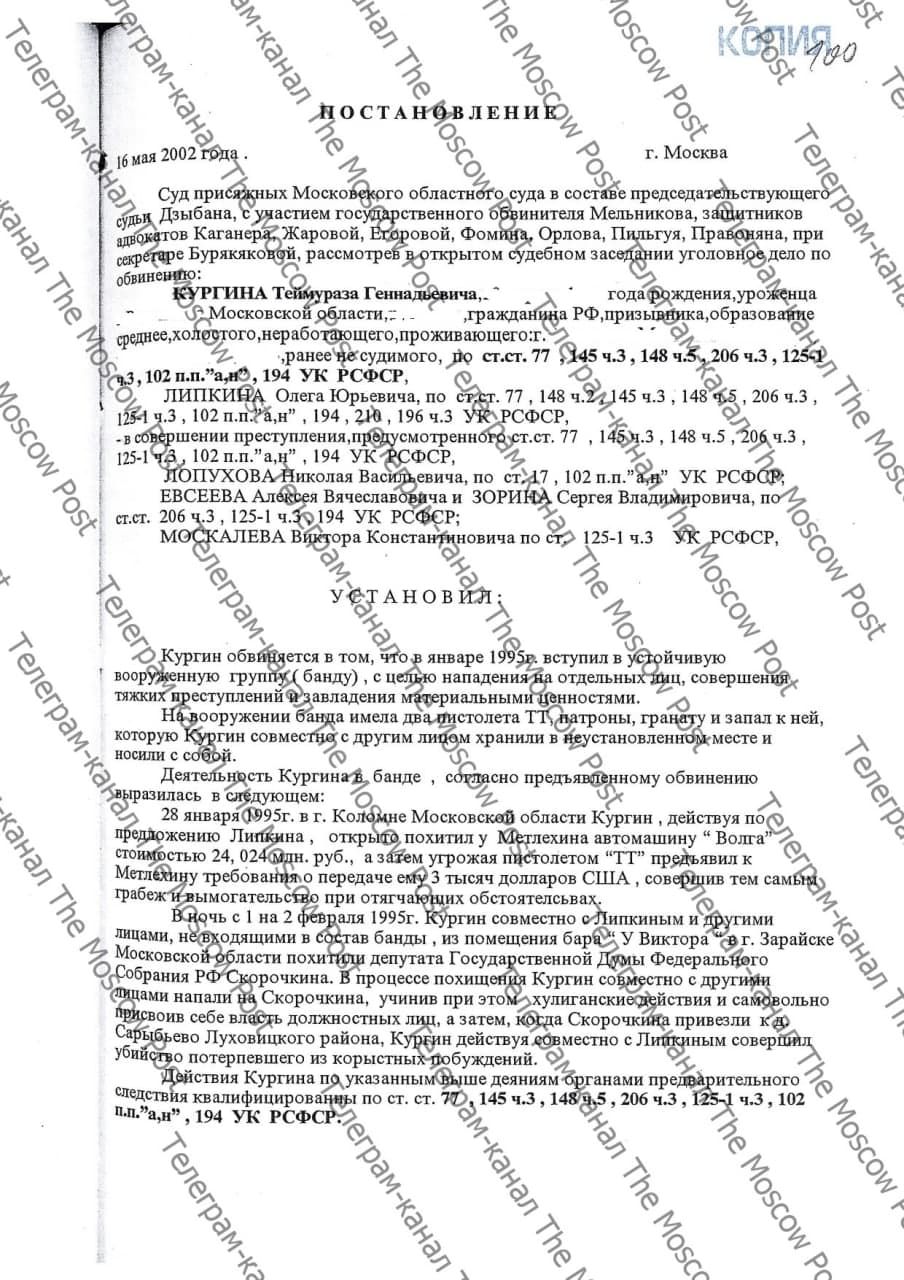 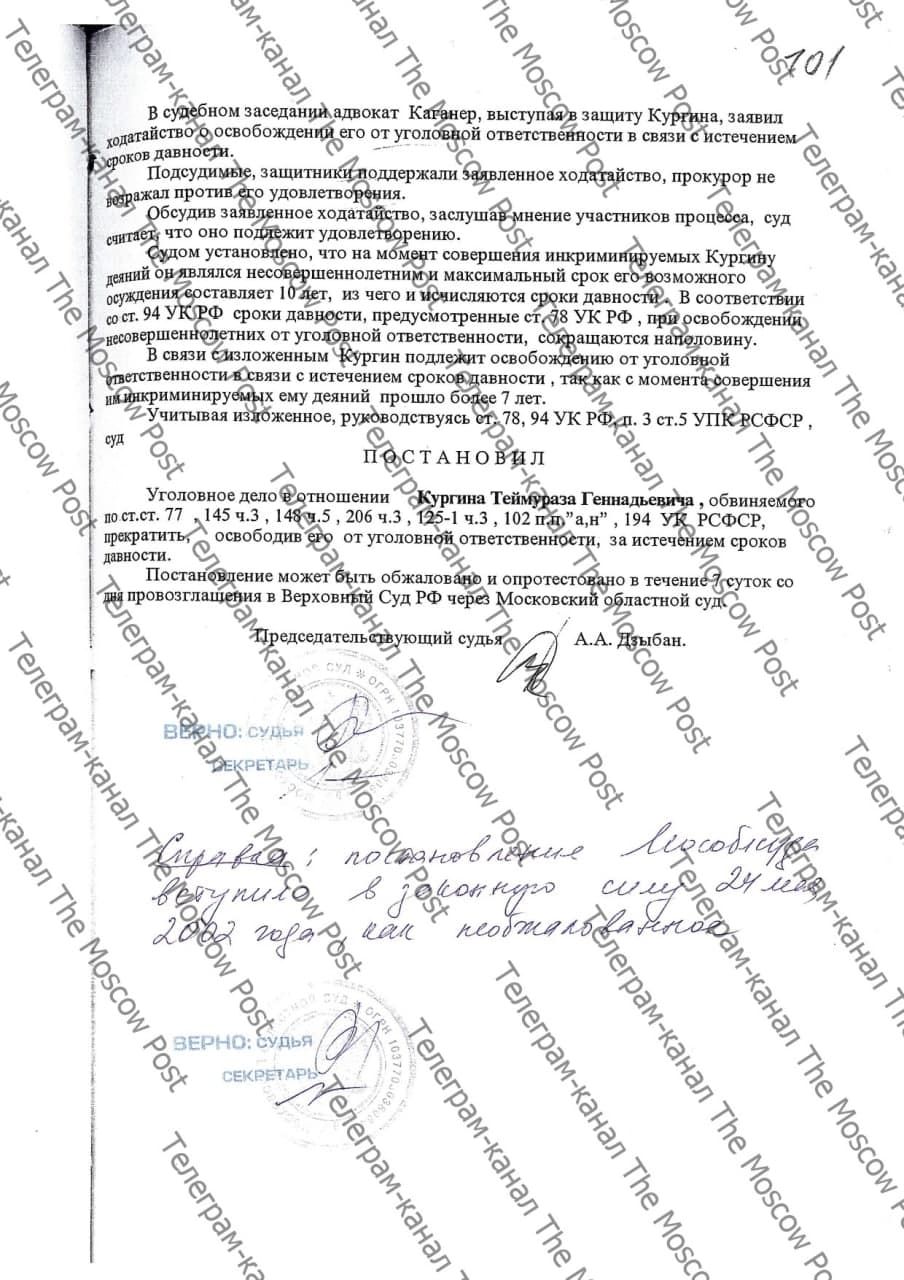 The decision of the court

The decision of the Moscow Regional Court in the case of Kurgin. The documents are taken from the The Moscow Post telegram channel (it has no relation to the online edition of The Moscow Post. Has permission to use the TM "The Moscow Post")

Does it mean that Mr. Kurgin, unwittingly, only aggravated his situation? The transformation did not work: and the change of scenery did not happen!

But these were not all the surprises of the court sessions. Another "discovery" of The Moscow Post lawyers Varvara Kuznetsova and Fyodor Kravchenko: a man from the case of Timofey Kurgin, the "author" of numerous publications, Ruslan Dzheliev... doesn't exist at all!

"We have not found any traces of the existence of Ruslan Dzheliev, - said Varvara Kuznetsova, - there is only a first name, last name, place of birth. Not even a date of birth. This is clearly a fictional character. But the judge Nadezhda Kiseleva refused to do the query concerning Ruslan Dzheliev".

The film was watched in court

And, since the defense of Mr. Kurgin constantly argued that the plaintiff had nothing to do with the death of Deputy Skorochkin, the lawyers of The Moscow Post asked the court to attach new evidence on the topic, namely, to add two earlier publications in the press - in the Kommersant newspaper and on the RIA Novosti website, as well as a SD-disk with the film of NTV, episode 23 "The Life and Death of Deputy Skorochkin" (19.05.2000) and a film from the series "Criminal Russia" "How the Deputy Skorochkin was killed".

"The Life and Death of Deputy Skorochkin"

But the lawyer of the A-PRO office Anton Vorobyov was strongly against the film from the NTV channel.

"I object. It's not a film, it's a show! In this video, there is no information that the plaintiff killed Deputy Sergey Skorochkin. The video runs for 40 minutes. And the talk about Skorochkin lasts for 30 minutes."

Mr. Vorobyov was reasonably objected to by the defense of The Moscow Post.

"This is a talk show where Skorochkin's criminal case was discussed. Deputies of the State Duma spoke on this talk show," explained lawyer Fyodor Kravchenko. - The court should examine the evidence, this is the task of the court. Examine the faces, images, and information that the plaintiff denies. All this information has already been distributed in other media."

As a result, both films were watched in court...

"How Deputy Skorochkin was killed"

It is said that during his time in custody, Kurgin managed to get close to the leaders of the criminal world. And allegedly in the pre-trial detention centre, he was sitting in the same cell with Shakro Young (aka Zachary Kalashov). And allegedly Shakro even wanted to crown him as a "kingpin".

Mr. Kurgin's lawyers disputed this fact in court, too!

But even today, Mr. Kurgin has plenty of criminal connections.

One of such close connections is friendship with Alexey Zhelneev for many years. They have been communicating since the 90s, when both were going through their prison "universities". 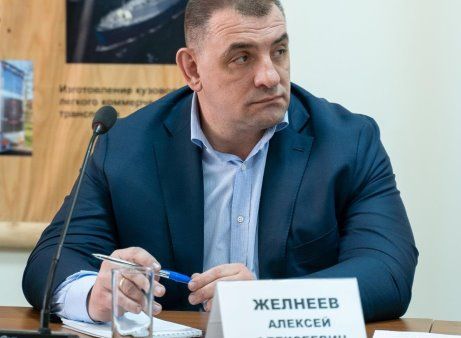 It should also be reminded you of this fact: Timofey Kurgin is currently engaged in business, he is the founder of the Russkiy Les company. This company employs and Mr. Zhelneev as well. They also work together on the Development of the Regions. In this company Mr. Zhelneev is the founder.

But Zhelneev is also a very opaque character: in 2018, he tried to run for the Legislative Assembly of the Irkutsk Region. Failed, because the "sins" of the past years surfaced. As it turned out, in 1995, by the verdict of the Cheremushkinsky district Court, Alexey Zhelneev was found guilty of robbery: he received 2 years of correctional labor.

Another close "criminal" contact of Timofey Kurgin with the American boxer Floyd Mayweather, who was repeatedly brought to criminal responsibility in his homeland. 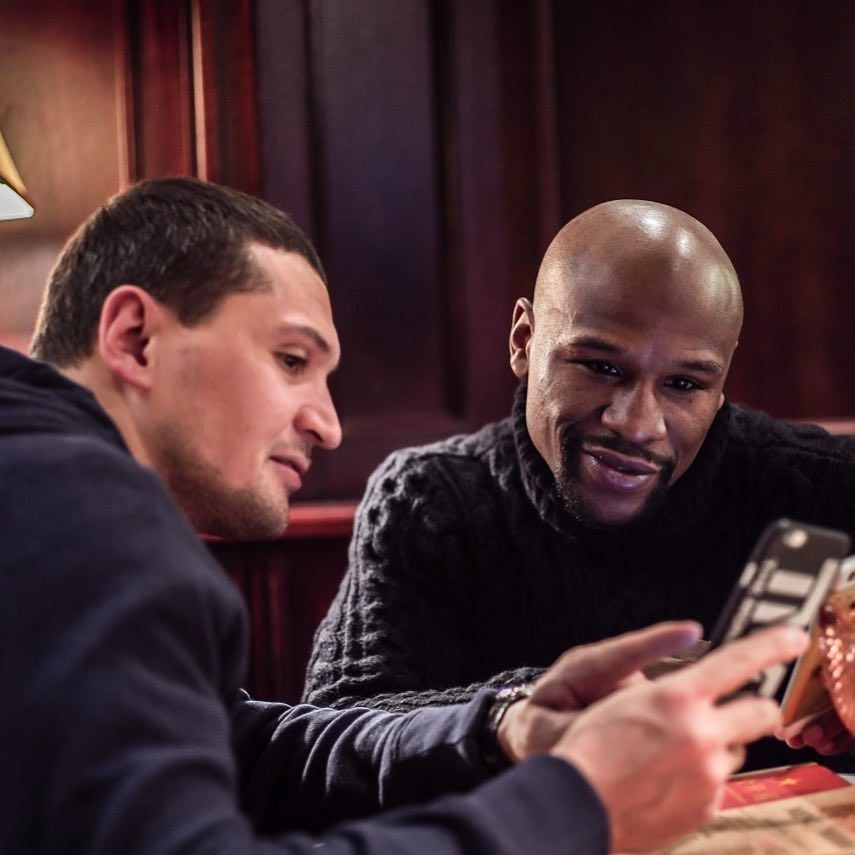 The fact is that Timofey Kurgin has been fond of boxing since childhood. He even established a boxing academy. The boxing Academy is attended by important people. In particular, member of the Board of Directors of Gazprom, Andrey Chernogorov. His sparring partner is Alexander Braverman, head of the Federal Corporation for the Development of Small and Medium-sized Businesses. Sergey Chemezov, the head of Rostec Group, also looks into the Boxing Academy. By the way, General Chemezov himself is a former boxer. Besides, it was General Chemezov who sponsored Mayweather's visit to Russia.

These are the big connections that Mr. Kurgin has.

But all attempts to "clean up" his own tarnished reputation had the opposite effect.

In general, the change of scenery did not work. The "Operation Barbarossa" failed miserably: Timofey Kurgin did not managed to "break" independent journalists through the knee, it was impossible.