Medvedev "returns" with Sobyanin: where was Mishustin?

Sitting next to the Patriarch at the Victory Parade, Dmitry Medvedev and Sergei Sobyanin gave reason for hearing in order to see them in the future by the president and prime minister. Mikhail Mishustin may be out of work?

As the correspondent of The Moscow Post reports, the past May holidays gave new food for reflection to conspiracy theorists from political science. At the May 9 Victory Parade on Red Square, they saw several interesting moments that they tried to interpret as some signals about the Kremlin's position regarding the future of the Russian leadership.

In the West, there is a whole political pseudo-discipline - "kremlinilogy." Experts who attribute themselves to this area are busy studying various kinds of symbols, signals and other signs that the Russian leadership allegedly does not accidentally descend into the masses. Despite the tension of such ideas, many of these forecasts subsequently turned out to be surprisingly correct.

One of the "markers" of domestic political layouts in the Kremlin is allegedly the seating of VIP persons at various events. At the Victory Parade, in the stands, there was an extremely interesting observation: next to the Patriarch of Moscow and All Russia were the former President, and now the deputy head of the Security Council and the leader of the ruling party United Russia Dmitry Medvedev, as well as the current mayor of the capital Sergei Sobyanin.

We will leave the patriarch alone, but they just don't put anyone next to him. In the immediate vicinity of the Patriarch, we note, there was neither Prime Minister Mikhail Mishustin, nor the head of the foreign intelligence service Sergei Naryshkin, nor other figures who have recently been trying to present as possible future presidential candidates.

By the way, Sobyanin was happy with the President at the Easter Service in the Cathedral of Christ the Savior. Mishustin was not invited, or was he in another place?

Meanwhile, both Medvedev and Sobyanin have repeatedly tried to imagine the so-called downed pilots, politicians who have already reached the limit of their careers. Footage from the May 9 Parade says this is most likely not the case at all.

Turning into a "hawk"

Political analysts interviewed by The Moscow Post agree that such a seating is not at all accidental, and can talk about many things. First of all, those who wrote off Medvedev were wrong. And if we remember how often Medvedev began to appear in the media space today, then this becomes obvious.

The telegram channel, recently launched by Dmitry Medvedev, has already exceeded 300 thousand subscribers. In it, Medvedev appears in the form of a "hawk," commenting on current events - mainly related to a special military operation in Ukraine and the colossal pressure of the Western world on Russia. Never before has Medvedev shown his position so actively.

Knowing the mood of Russians about current events, he appears in double guise - on the one hand, speaking as a real voice of power (after all, the deputy head of the Security Council), on the other, in fact, echoes the aspirations of people demanding justice in Ukraine and opposing that disgusting behavior, the policy of discrimination experienced by Russians from the so-called. "civilized world." I.e. almost a people's tribune.

Such activity of Medvedev in the public field was impossible even during his presidency, when he, as you know, tried in every possible way to maintain normal relations with our former partners. We immediately remember iPhones, love for Western music (in particular, Deep Purple), and much more. 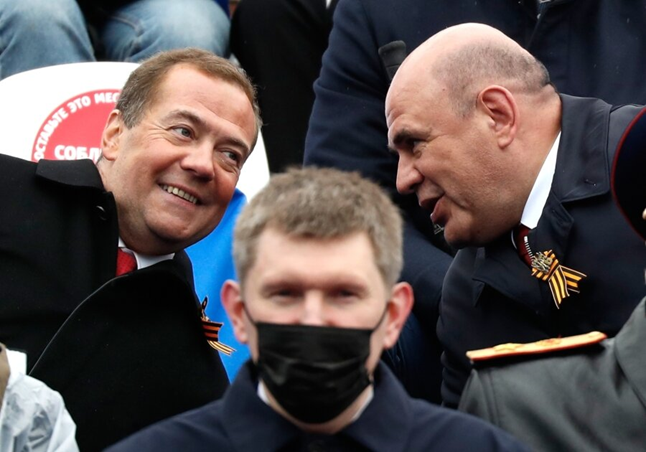 Dmitry Medvedev (at the left), Mikhail Mishustin (on the right) and Maxim Reshetnikov (in the center, it is considered Sergei Sobyanin's person) on Victory Day parade in 2021. Photo: anews.com

If Medvedev goes on elections, he will go for them with completely different rhetoric and in other political image. Both such rhetoric, and such image now are most demanded by the Russian society.

To keep the status quo

Besides, unlike Sobyanin, Medvedev is the person clear to our Russian elite. Including, elite from business. Sergei Sobyanin – much more dark horse in this regard.

Unlike Sobyanin, Medvedev already proved in practice that he won't change the settled state of affairs. Here he is more focused on real practice of Vladimir Putin whom always I considered the senior companion and an example for imitation.

At the time Vladimir Putin brought rigid order to the economic sphere, having taken in hand so-called oligarchs. Actually, the principle by which Putin acted is simple and clear – earn if as a result of your work it becomes good not only to you, but also and the country. If you try to consolidate the economic achievements in the political way – i.e. you will use the capitals to receive the power, then lose everything.

It was as a result finished a bacchanalia of the 90th years, but without new repartition of property and a lomaniye of oligarchs through a knee. Someone lost everything as Mikhail Khodorkovsky, and someone began to work for the country. Having come to the power in 2008, Dmitry Medvedev let know that he doesn't intend to pull down stability and to be engaged in redistribution administrative, political, any you want a rent between people close to.

About Sobyanin it can't be told – more true, simply it isn't clear that he will do. But all have in sight examples of his former deputies – Maxim Reshetnikov and Marat Khusnullin who obviously not without the aid of Sobyanin appeared in Mikhail Mishustin's Cabinet of Ministers. And, according to evil tongues, allegedly are much more focused on the interests of the former chief, than on the interests of the country.

And here too interesting moment. Why Sobyanin was called the hit pilot? Attribute him various ambitions. It is considered that he was the most probable candidate for the Prime minister's post that then to receive a springboard to presidency. Allegedly, he too strongly believed in the prospects, but lost hardware fight to Mishustin. And after its began to write-off.

How here not to remember the former head of Presidential Administration, and even earlier – the Minister of Defence of the Russian Federation Sergei Ivanov. In 2007-2008 he was considered the most probable candidate for President of Russia. Like, support to him for certain would be given by Vladimir Putin. But in practice it didn't occur. By hearsay, Ivanov so believed in the prospects that his team already "divided positions" even before elections.

The President (regardless whether he wanted to support really Ivanov, or not) doesn't suffer it. The result – Sergei Ivanov not only didn't become the candidate Presidents, but also very quickly it appeared on boondocks of political life of the country. Today he is content with a "pension" position of the special representative of the Head of state concerning nature protection activity.

But Sobyanin, unlike Ivanov, after appointment of the Prime minister and new Kabmin didn't leave anywhere. He not only reserved a post of the Mayor of Moscow, but also, it seems, could lobby a great number of the people in the Cabinet of Ministers. Besides, he is not the so last manager in the country – even his opponents are forced to recognize it.

That is why the most probable other deal seems. It is very likely that presidential ambitions to Sobyanin really cut on approach to Premiership. But in present hardest conditions competent managers are necessary for the country. And Mikhail Mishustin, at all the pluses, made already enough mistakes – and not only now, and in the period of a sharp phase of a pandemic of coronavirus when summer of 2020 they with Sobyanin had the whole sword-play in media concerning introduction and removal of anti-covid restrictions.

At the same time many were dissatisfied with Dmitry Medvedev's premiership. Even progress in import substitution which really was during 2014-2020 tries to attribute to others now.

Considering it, and taking in all good faith (that is doubtful) all conspirology around seating on Victory Day parade, it seems, the worker can be the following option. To Sobyanin who was already taken away from presidency can give so desired to them in the past the Prime minister's post. 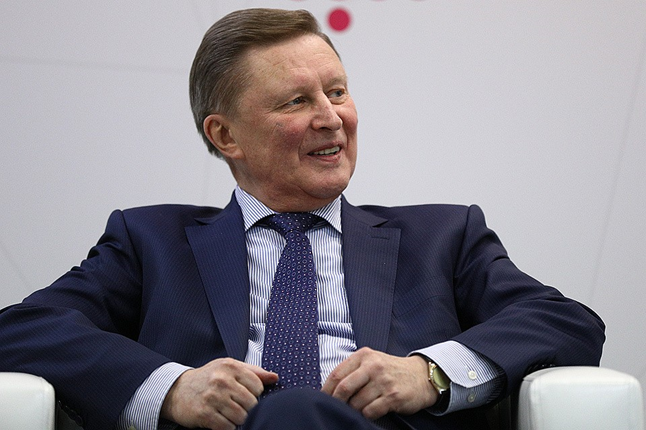 Both Sobyanin, Medvedev and any other potential candidates need to try not to repeat the fate of Sergei Ivanov (pictured), who could be ruined by excessive self-confidence. Photo: www.pskov.kp.ru

And Dmitry Medvedev, as a person who has proven his loyalty to the country and the current political course, can indeed nominate himself. Of course, if he is sure that the President will support him. At the same time, the continuity of the course will remain, and the Russian oligarchs will have an understanding of how to live and work with the new-old leader of the country.

What the reality will turn out to be is impossible to know in advance. However, so far, equal figures around Medvedev and Sobyanin have not been observed, and Mishustin has not yet shown his possible ambitions, and acts exclusively as a technocrat. And this says that conspiracy theories of "Kremlenologists" can have grounds.