Lukashenko "opened" the Belorussian "stash" of the Kruglovs?

Russian Deputy Finance Minister Andrey Kruglov may have been involved in possibly illegal fraud in "Belgazprombank", which is now being investigated by the Belorussian authorities.

As the correspondent of The Moscow Post reports, as part of the investigation of the "Belgazprombank" case in Belorussia, the accounts of the wife of the Deputy head of the Ministry of Finance of Russia Andrey Kruglov were arrested for 3 million euros.

This news may spur an already escalating scandal between the fraternal country, the subsidiary of the Russian Gazprombank and a large circle of persons associated with them both in Belorussia and in Russia.

This means that the movement on accounts associated with the Kruglov family may have a direct connection to the scandal with Belgazprombank. It should be recalled that the Belorussian authorities claim that large amounts of money were pumped through this Bank, which were withdrawn to offshore countries, and all this allegedly happened with the direct participation of former Head of the institution Viktor Babariko. It was reported by RIA Novosti.

Belorussian channels showed a story in which it was stated that the Russian shareholders of Belgazprombank received different incomes from the Belorussian subsidiary, and one of them allegedly developed an exclusive agreement for the placement of a foreign currency loan, which was not available to other citizens.

Apparently, Andrey Kruglov is meant under "one of them", and 3 million euros - just a currency loan. At the same time, Belorussia stressed that at that moment Kruglov did not have loans there, only his wife did, so her funds were arrested in the case of Belgazprombank.

It seems that Andrey Kruglov is a very big fan of exclusivity and special attitude to himself and his affairs. For about 17 years, he had been working in the structures of Gazprom. He was Deputy Chairman of the management Board and Head of the Financial and Economic Department of Gazprom. That is, the main financier and, in fact, the right hand of Alexey Miller. Accordingly, he should have had a full understanding of the financial affairs of Gazprombank's subsidiaries.

This situation is not the only one in which Andrey Kruglov can set up the country's leadership and the whole of Russia. For many years, rumors about his colossal assets in Russia and abroad, his friendship with the influential Deputy Mayor of Moscow, Petr Biryukov, and a variety of dubious projects and "schematics" are being spread.

According to the Zavtra newspaper, Kruglov can be a beneficiary in a long list of assets. He is credited with owning a bank and a large pool of commercial real estate in Moscow, including the Galereya Aeroport Mall, Retail Park, Moskvorechye, Tulsky, Prazhsky Grad, Perovo Mall, and others. People who spread rumours consider him to be a business partner of Petr Biryukov's, relatives, who is Sobyanin's construction Deputy,  through Garant-Invest Holding.

Recently, The Moscow Post published an investigation that traced Kruglov's possible connection with the Attis Enterprise business asset. Siluanov's deputy can own the latter one through a complex network of companies-pads and figureheads, among which the oligarch Gennady Kozovoy may be present.

These days, a major scandal is breaking out with this company in Nakhodka, whose residents believe that the company is illegally building a railway near the city. And such "schematics" are inevitable for "dishonest" officials, who simply by virtue of the law can not own a business. And if the Russian authorities turn a blind eye to Kruglov's affairs, Belorussians seem to be less favorable to him.

According to rumors, Kruglov's rapid ascent to the business Olympus began quite a long time ago, but it became rapid in 2017, when he acquired 20% of the Garant-invest financial and industrial company. This was written by journalists of Infox.ru.

Allegedly, it was through them that he gained control of the Tulsky TDK (Shopping and business Complex), the Galereya Aeroport, and many other assets. Of course, salaries at Gazprom are considerable, especially for top managers. And still it is extremely doubtful that Kruglov saved from his salary. May some not quite legal "financial instruments" be used there? Kruglov, as the chief financier of Gazprom, had plenty of them. The same Belgazprombank.

By an amazing coincidence, the co-owners of the Garant-Invest Financial Industrial Company  were also women who are considered relatives of Petr Biryukov — Irina Biryukova and Ekaterina Biryukova. Of course, Petr Biryukov himself never confirmed the relationship with the ladies. The ladies, meanwhile, are still co-owners not only of Garant-Invest Financial Industrial Company, but also of the Bank of the same name. 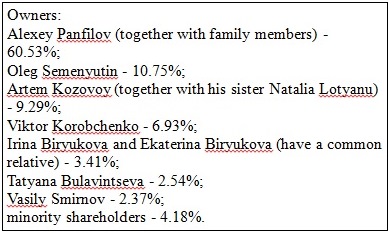 This Bank is not well known to the public, but it is often heard about from Central Bank officials. In the same year of 2017, when Kruglov entered the capital of Garant-Invest Financial Industrial Company, the Bank received a warning from the regulator. As follows from the message on the portal of the service Banki.ru, Chairman of the Board of the Bank Igor Kasyanov was brought to justice for failure to comply with the requirements of the law on countering the legalization of proceeds from crime.

What happened two years later, in 2018 and 2019, if we look at the Bank's indicators? And there signs of a possible withdrawal of assets can be seen. The Bank is literally "bursting at the seams". Over two years, assets have decreased by more than 15%, the loan portfolio - by 11%, investments in securities - by 32%. Apparently, sensing something was wrong, depositors left the Bank - their deposits decreased by 34% to 2.7 billion rubles in June 2020. 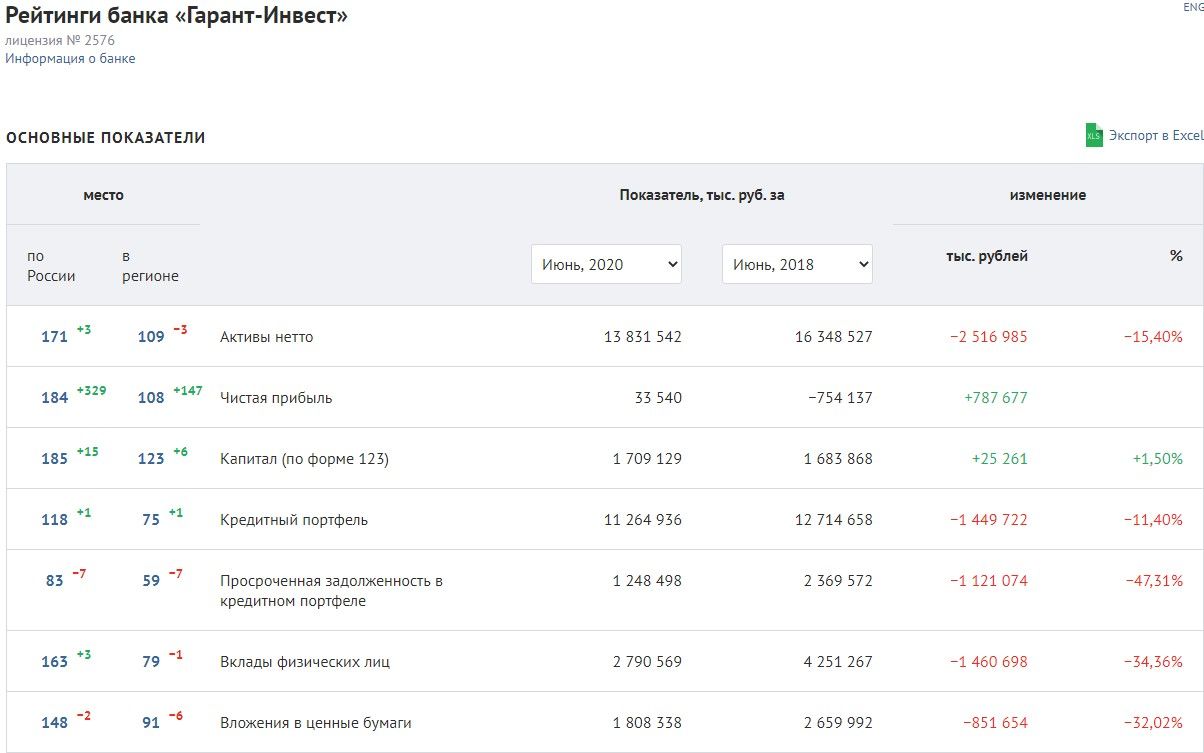 Does it seems that the Garant-Invest Bank is the next in line in a series of banks that may have their license revoked, thus causing a major scandal in the banking market? And it will be good if the depositors can return at least something.

And the Biryukovs ladies still remain co-owners of the Bank. Artem Kozovoy, the son of the oligarch Gennady Kozovoy keeps them company. The oligarch himself is known for owning the Raspadskaya mine, where a tragedy occurred in 2010 that took the lives of dozens of people. In addition, it is Artem Kozovoy, who is the owner of Portovy Holding LLC, the founder of Attis Enterprise, a participant in the scandal with the construction of the railway in Nakhodka.

Of course, the Biryukovs ladies remain co-owners of the Garant-Invest Financial Industrial Company, while Andrey Kruglov himself has long been officially absent from the ownership of either the Bank or the entire group. But instead of it, the Cyprus offshore company Vetturex Limited, which now owns 15% of the company, appeared among the founders. 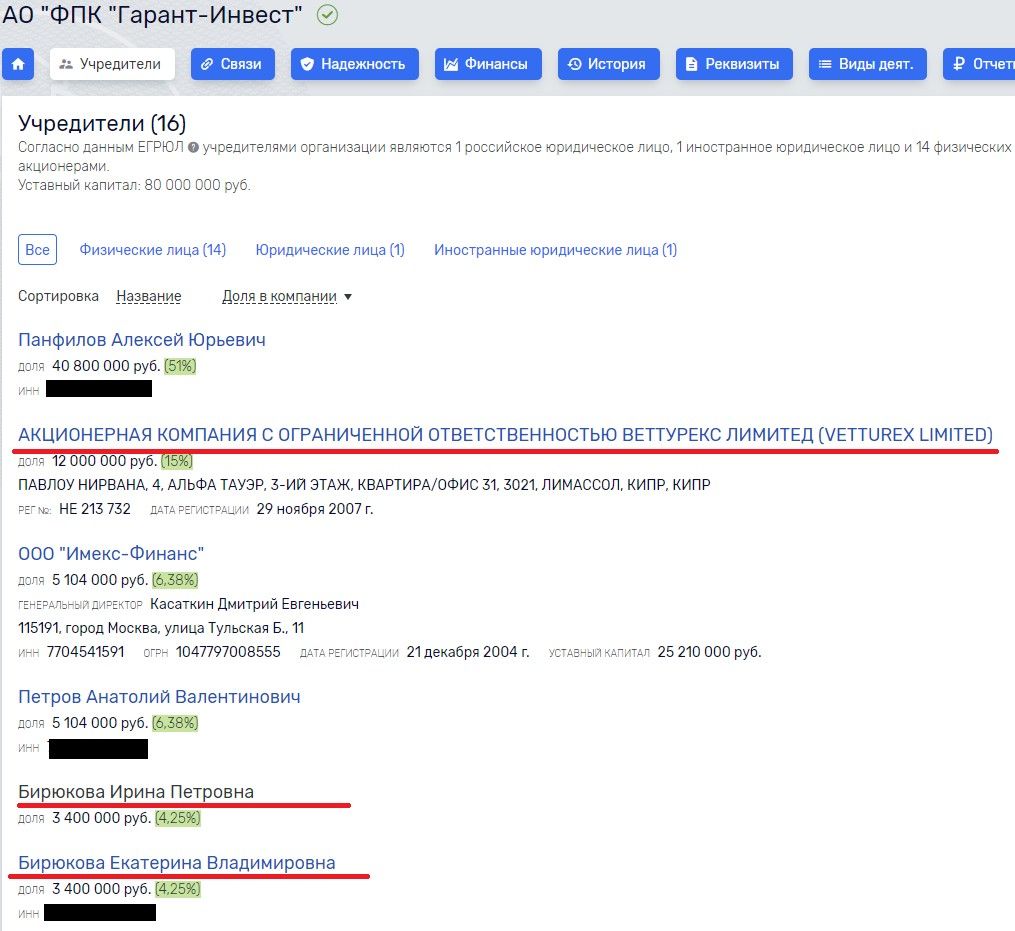 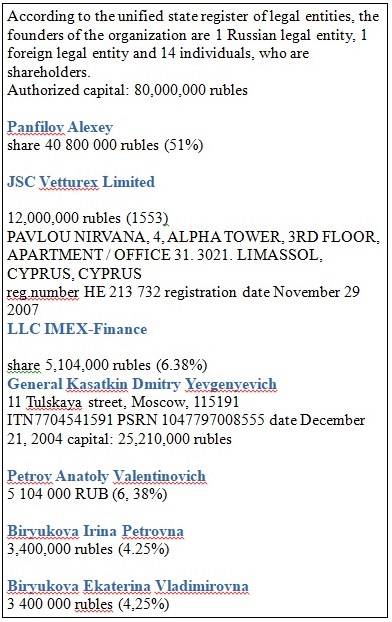 According to evil tongues, it is through this Cypriot structure that the Kruglov family owns the asset. Through it, hundreds of millions and billions can be pumped from the Garant-Invest Bank. And the Bank hasn't collapsed yet allegedly for only one reason: the management of the Financial Industrial Company is vitally interested in its work for conducting not always legal financial transactions.

Of course, only the competent authorities can confirm or deny this. But just think about it - Andrey Kruglov, who is called the owner of an entire Palace in the Istrinsky district of the Moscow region, was awarded the medal of the order "For Services to the Fatherland", II degree, and the Belorussian order of Francysk Skarina.

Such a person should be absolutely spotless, especially taking into account that he himself has repeatedly had to communicate with Belorussian colleagues, representing the entire Russian state. And this man has so many skeletons in his closet, and now his wife's accounts are being seized. Isn't it time for Kruglov to really slow down a little?