Lukashenko following the way of Ceausescu?

The surge in violence in Minsk after the presidential election says that Aleksandr Lukashenko has no other options left to hold the situation, except for a forceful scenario.

As the correspondent of The Moscow Post reports, several people were detained in Belarus, who, according to the Belarusian law enforcement authorities, coordinated unauthorized protest actions in Minsk. Meanwhile, according to the newly elected President of the country, the customers and curators of the actions are sitting abroad, in the Czech Republic and Poland.

It is impossible to look at what is happening today in the fraternal Republic without concern. After the most controversial election campaign, Aleksandr Lukashenko received about 80% of the vote. His closest competitor Svetlana Tikhanovskaya got about 10%. But few people believe in such results.

Of course, even the opposition representatives themselves do not believe the opposition's claims that Tikhanovskaya took 80% of the vote. But the desire to suppress and destroy any sprouts of discontent suggests that this victory was Pyrrhic for Lukashenko.

Detractors would like to say that he is losing control of the situation. No, he is not. But the price of this "control" - mass detentions, a huge surge in violence against protesters, disconnection of the Internet and mobile communications, suggests that "Batka" is no longer batka (father in Belarusian), but a real stepfather. 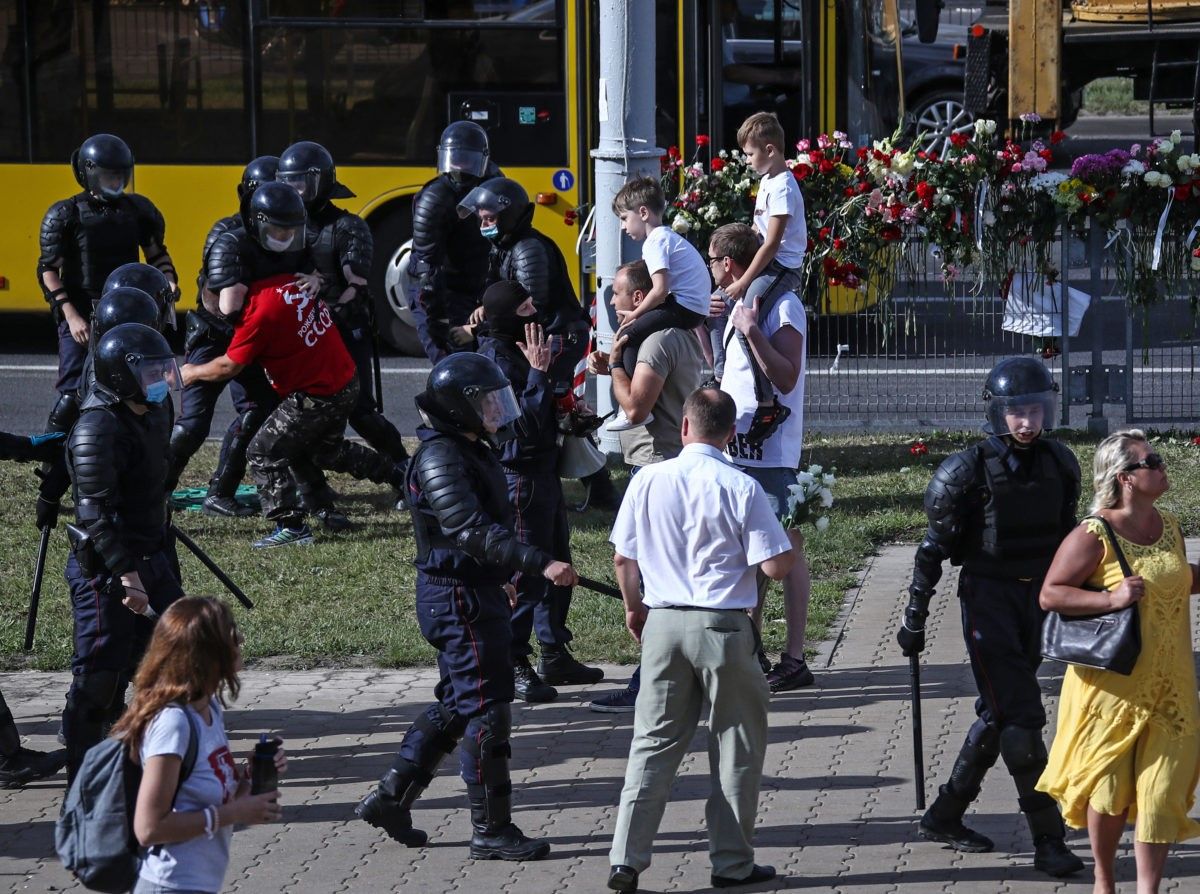 Forceful crackdown of an unauthorized protest in Minsk

The number of victims could be counted in the hundreds. Law enforcement officers beat with batons and use tear gas not just towards protesters, but also seemingly completely extraneous people. For example, cyclists passing next to the unauthorized actions. Violence breeds violence - according to President Lukashenko himself, at least 25 law enforcement officers were injured during the crackdown.

The things that are happening in Belarus are of great importance for Russia. And not because Lukashenko and Belarus are supposedly Russia's "last" allies. This is a propaganda stamp. But because "Batka" shows what should not be done by his example. What prevented him from allowing opposition candidates, who would have won 15-20% of the vote, to participate in the elections? Why was there such a charade?

After all, Tikhanovskaya was nominated for President of the country not from a good life. Initially, her husband, blogger Sergey Tikhanovsky, was nominated for President. However, at first he was denied registration, and later appeared behind bars on charges that many in the country believe were fabricated. Allegedly, he could prepare mass riots. This was written by RIA Novosti.

Thus, Tikhanovskaya's husband could actually be held hostage. However, it was the public coverage of this situation, as well as the continuation of his political career by Tikhanovskaya herself, that could give at least some guarantees that he would not be "drowned" in full. Despite this, after the election, the situation became worse both for him and for Tikhanovskaya herself.

They say that after the vote, Sergey Tikhanovsky was actually taken hostage. But this is not enough - according to rumors, Tikhanovskaya was subjected to unprecedented pressure through the couple's children, as a result of which she was allegedly forced to leave the country and go to Lithuania.

Tikhanovskaya was called the "project of the West", a Trojan horse, designed to destabilize the situation. But the situation has long been destabilized without her participation. Shortly after fleeing the country, a video message from Tikhanovskaya appeared on the Internet, where she was reading a text that many observers believe was written for her by the Belarusian security services.

Tikhanovskaya looked very strange and confused. As if she was really forced. She asked the protesters to admit Lukashenko's victory and not to go to mass unauthorized protests.

But millions of people whose votes could have been stolen have their own opinions, which Lukashenko will have to reckon with. Otherwise, he may repeat the fate of Nicolae Ceausescu.

Detractors already call Aleksandr Lukashenko "Lukashesku". And it's not funny. The latest videos from the capital of Belarus show that despite all the brutality of law enforcement, people do not leave the streets and continue to protest. There can't be a worse scenario for Lukashenko. And the Western public has already called to discuss the possibility of introducing new sanctions against the Belarusian leader.

How ironic! According to our sources, the ugly story of the detention of 33 Russians in Minsk, allegedly in preparation for organizing riots, was started just to avoid Western sanctions for dispersing protesters.

Allegedly, political strategists close to Lukashenko cooperated with their Ukrainian colleagues and offered an option: "We blame Russia, we present it all as an attempt to pressure Lukashenko. And then, when there are protests, we again blame them: we told you so! Moscow wants to remove the objectionable Lukashenko because of trying to pursue a multi-vector policy."

Nonsense? It seems to be so. And yet, the Russians were still detained. However, Lukashenko had to be replaced later. This happened after negotiations with Vladimir Putin, who was clearly dissatisfied with the impromptu of "Batka". But was the "flywheel" of lies and disinformation already launched, and did it hit Lukashenko himself?

Yes, President Putin has already congratulated Lukashenko on his victory, although he was not the first world leader to do so. However, the signals that come from the Russian establishment do not leave any other options: Lukashenko has greatly angered Moscow, and even if he remains the President of Belarus, the former relations (as Alexander Grigoryevich probably expected) will no longer exist.

An important marker of this approach is the position of LDPR leader Vladimir Zhirinovsky. It should be understood - he never says anything without a reason, even if his statements do not seem quite adequate. Now he broke out with a series of posts in social networks, where he talks about Lukashenko's desire to hold power. And that his time has gone. 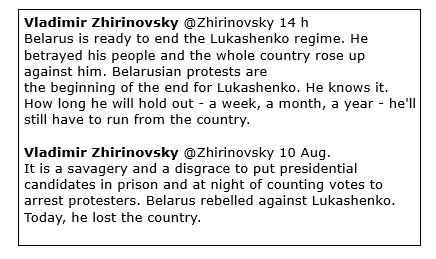 This is a significant signal not only from the political leadership of the country, but also from its wing, which oversees a lot of economic processes between our two countries.

Lukashenko was not forgotten an ugly story with another failed presidential candidate of Belarus, Viktor Barbariko. The latter has been Chairman of Gazprombank's subsidiary - Belgazprombank since 2000. He oversaw many issues related to the funds coming from gas supplies to the country. He had influence, political resources and popularity among the people. Barbariko is a well-known patron in Belarus. But Lukashenko simply did not allow such an opponent to join the race.

At first, he was refused registration. Allegedly, because his Declaration did not reflect the actual ownership and use of material assets and real estate, as well as income from the activities of a number of Belarusian commercial structures controlled by him.

But this was not enough, and now a criminal case has already been opened on the facts of alleged tax evasion and legalization of illegal income in Belgazprombank. Later, he was charged with taking bribes, as Izvestiya reported.

"Propagandists" close to Lukashenko immediately presented this as a card that Moscow wanted to play again. They say that through this Bank, some detractors from the Eastern neighbor could sponsor the overthrow of Lukashenko. Of course, Moscow was blamed.

It also looks like an outright charade. And this is after decades of real support for Belarus and its leadership from Russia. Not to mention endless loans, discounts on energy resources and protection of the interests of the fraternal Union Republic in the international arena.

Lukashenko wanted to sit on two chairs, losing the support of his own voter. Not completely, but the reaction of the security forces to the protests in Minsk suggests that there will not be the former "love" between them. Belarusians are wildly tired of Lukashenko, and it is no longer a matter of whether you are with Russia or the West. And the banal thing is that they have been robbed of their choice, and "Batka" is clinging to power with all his strength with his hands weakened by old age.

What does all this mean for Russia? Initially, the transition to a more rational, conscious and profitable model of relations with Belarus. We must admit that while Lukashenko is sitting in Minsk, the Union state project remains a beautiful idea that has not been implemented in practice.

We can only hope that Lukashenko will be smarter than Nicolae Ceausescu, and there will be a reduction in the degree of violence and negotiations with the protesters. Because our country will not tolerate another anti-Russia at its borders, and the impasse created by the Belarusian authorities is unlikely to suggest any other options.