Limarenko is covered by the "waters" of Aqua City

Can the head of Sakhalin, Valery Limarenko, be brought to justice for the machinations that were carried out under his predecessors?

According to the correspondent of The Moscow Post, a case of abuse of authority was initiated against the Minister of Economic Development of the Sakhalin Region Alexey Uspensky - according to law enforcement officers, he signed an act of acceptance and transfer of the Aqua City complex in 2018, despite the fact that the state of the attractions at the facility did not meet the technical requirements. It is possible that Uspensky became only a "whipping boy", because the work was taken by a special commission headed by "old men" of the regional government, and the order itself was carried out by businessmen Konstantin Reznitsky and Igor Koptelov, who had long settled in the region.

The positions of the old-timers are so strong that even the new governor Valery Limarenko, who until recently allegedly ignored the situation in Aqua City, could not "move" them. Does the head of the region face problems because of the inability to "compete" with the old team?

The Prosecutor's Office and the FSS checked compliance with the laws in the maintenance of the Aqua City water and recreation complex. They found out that the condition of attractions and equipment does not meet the requirements, and the use of attractions is still impossible, as it threatens the life and health of visitors. The complex was being built from 2014 to 2018 - that is, it started under the governor Alexander Khoroshavin, and its construction was under the previous head of the region Oleg Kozhemyako. However, Uspensky, who came to the regional government only in 2017, was blamed.

The contract for the construction of Aqua City was signed in September 2014 between City Management Company LLC and the Ministry of Investment and External Relations of the Sakhalin region. Later, the agency was merged into the Ministry of Economic Development of Sakhalin and the purchaser was changed, thus Uspensky became the responsible person later.

At the same time, the contract of 3.2 billion rubles raised questions from the very beginning: such a solid contract was gone on the basis of consideration of a single application for participation in the auction. At the same time, the technical task for the object, which was still to be built, contained characteristics up to tenths of the area, which immediately raised a logical question - was the technical task created for a specific office?

The act of acceptance and transfer of Aqua City in 2018 was signed by Uspensky. According to the contract, the purchaser, represented by the Ministry, was obliged to accept the object and conduct an expert examination to verify the accepted real estate. And although the final resolution was signed by Uspensky, the object was also examined by the acceptance commission, which, among others, included old-timers of Sakhalin politics - Alexey Belik, Vladimir Sidorenko and Anton Zaitsev. And the personalities of these characters are extremely interesting, because they all have such strong positions in the region that they have been working since the previous governors and did not fall under the "clearing" of the new head. 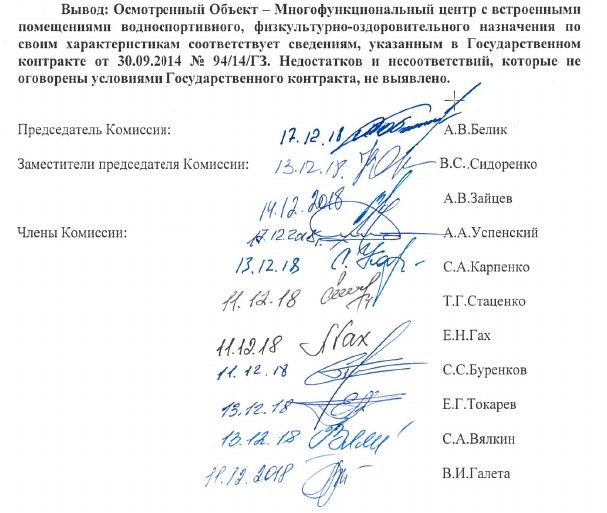 Alexey Belik appeared in the region under ex-governor Oleg Kozhemyako. His career developed rapidly: in 2016, he came to the post of vice-mayor of Yuzhno-Sakhalinsk, and now he is the chairman of the government, that is, the second person in the region.

On Sakhalin, among his detractors, he gained fame as a man who puts "blind signatures" - that is, signs almost all the papers that fall on his desk. That's why he always "gets into" scandals, so the story of "Aqua City is just a "drop" in the ocean. In particular, as Regnum wrote, in September 2018, the regional government extended the program of payments for improving housing conditions for large families until the end of 2019. But three months later, Belik reduced the implementation period of the program by almost a year. Thus, the official in fact left large families of Sakhalin and Kurile Islands without housing, while not explaining his decision in any way.

Mr. Belik is a member of the Board of Directors of the Sakhalin Region Development Corporation. There is Vladimir Sidorenko together with him, who has been working in the region since 2008 - he was previously engaged in energy, and in 2017 became deputy chairman of the government. Sidorenko can be called an old-timer, because he survived three governors in office, although he constantly pulls a string of unsightly rumours.

As was written by Sakhalin.Info, in 2017, a criminal case was opened against Sidorenko on the fact of giving him a bribe in the amount of 3 million rubles, but due to "active remorse", the charges against him were dropped. The official actively began to "set up" those to whom he himself transferred money for his career"promotion" - including ex-governor Alexander Khoroshavin, who is now convicted of bribery.

Anton Zaitsev also sits on the Board of Directors of the Sakhalin Region Development Corporation. He has been in the government since 2015 - he came to the post of Regional Minister of Sports, and now he is also Deputy Chairman. Now in the region, he oversees the sports sphere, in which not everything is calm. In addition to Aqua City (regional and interregional competitions are already held at the facility), hangars purchased in 2018 for WorldSkills competitions also raised questions at one time.

According to Sakhalin.Info, the director of the Sakhalin Centre for Technical Sports (SCTS), as a result, Dmitry Tretyakov became a defendant in a criminal case under the article "Negligence". According to law enforcement officers, the institution headed by him purchased two prefabricated hangars for the national final of WorldSkills for 10 million more than it could, and thereby caused damage to the regional budget. And Mr. Zaitsev was in charge of this purchase.

But despite a series of scandals in which Belik, Sidorenko and Zaitsev fall, they still hold their posts. Moreover, they were not able to displace Limarenko. And now, probably, it can "come back" to him, because the resonant scandal with Aqua City has already entered the federal agenda.

Was it "divided" long time ago?

In the story of Aqua City other significant characters for the region from the business side are involved as well. We are talking about Konstantin Reznitsky and Igor Koptelov, whose Gorodskaya Upravlyayushchaya Kompaniya LLC (City Management Company) built the object. At the same time, the company was founded only two years before receiving a multibillion-dollar contract, according to the main type of activity it was not a developer at all, but was engaged in the operation of the housing stock. It had an authorized capital of "ridiculous" 10 thousand rubles.

In 2019, the company ceased to exist through reorganization in the form of joining Brilliant LLC. At the same time, at the end of the days, the company's financial indicators left much to be desired: with revenue of 13 million rubles, there were losses amounting 386 million. But this company received billions under the state contract! Is it possible that the budget money were just "drained"?

Brilliant also raises questions: with revenue of 998 million rubles, it has a profit of only 68 million rubles. Where is such a backlash from? In addition, the share of the founders - Reznitsky and Koptelov - is pledged to VTB. Does it mean that the entrepreneurs develop their business with credit money? Isn’t budget money enough for them so they decided to take more from the state bank? 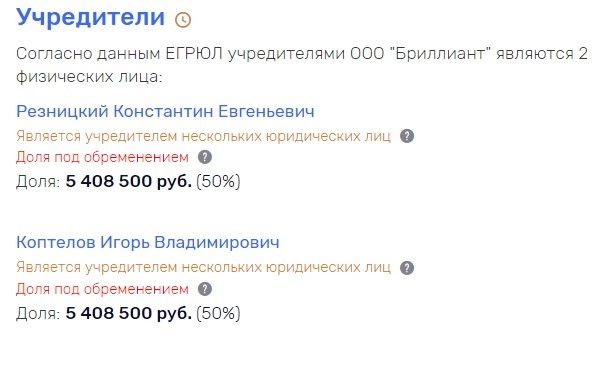 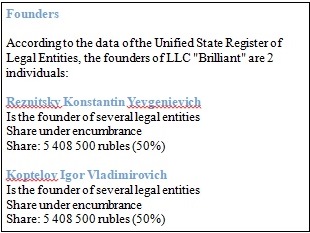 But these are not the only assets of merchants - each of them has a good dozen more companies in different areas of the economy. Is it necessary to say that many of them are fed by state procurements?

In addition, Mr. Koptelov is the head of the Autonomous Non-Profit Organization Hockey Club Sakhalin Sharks (Sakhalinskiye Akuly), and Reznitsky is the vice-president of the club. It is known that often sports assets can be used by officials to withdraw money. confidence specifically about, of course, it is impossible to say so for sure concerning Reznitsky. We will leave such conclusions to the competent authorities, who are already working hard on the Aqua City case.

By the way, JSC Kinomir, which is controlled by the influential in Yuzhno-Sakhalinsk Alperovich business dynasty, was the management company of Aqua City for several months. The company's tasks just included putting a zone with attractions into operation, but it was not done. The director of Kinomir, Roman Alperovich then denied - they say, was given an object in an improper state, all questions to the Gorodskaya Upravlyayushchaya Kompaniya LLC.

At the same time, according to blogger ruslanostashko in his LiveJournal, allegedly Alperovich in order to lower the rent of Aqua City twice participated in the competition, only by different legal entities. In the first competition, Sakhalin-Engineering (associated with Kinomir) actually won, but then the amount of 44 million rubles per year was considered high. Later, during the second competition, the object was taken only for 5 million rubles a year through the Kinomir company. And while Alperovich stirred up scheme and seek benefits, the budget suffered losses amounting millions. Kinomir itself is sitting in the "minuses" - with revenue of 105 million, it has losses of 12 million.

Now, according to the information of Sakhalin.Info, Kinomir is suing the new manager of the long-suffering complex - the ice palace named Crystal. The latter filed a lawsuit because he believes that the former tenant of the facility should pay a fine for not being able to open the doors of Aqua City in time. At the same time, the amount of the claim is simply "ridiculous" - only 6.5 thousand rubles, which is only 1.5% of the monthly rent.

And all this does not prevent local authorities from giving Alperovich solid contracts. Thus, the Sakhalin-Engineering company won two large tenders for the construction of social facilities in the village of Troitsk, Anivsky district, with a total cost of about 2 billion rubles. Can such a favour to the entrepreneur be explained by the presence of "connections" with the authorities?

And it is worth remembering that the Roman Alperovich himself was involved in politics: from 2009 to 2019, he was a Deputy of the City Assembly of Yuzhno-Sakhalinsk. His father Viktor Alperovich also tried to break into power: he wanted to participate in the elections for the post of mayor of the regional centre. But he was excluded from the race, as he provided an incomplete set of documents.

Taking into account all of the above, there is a feeling that everything on Sakhalin was "divided and sawn" long time ago, and Limarenko seems to be unable to do anything about it. So at one time, he chose the tactic of ignoring — did he hope that the problems that had begun under his predecessors would not touch him? Or did he have something to do with what was going on outside Aqua City?

But, apparently, now it is he who will have to answer for the long-suffering complex. It is curious, how many more problems that "bubbled" as if with the tacit permission of Limarenko, can "surface" in the region?