Light of St. Petersburg will be "given" to Boos

Businessman Georgy Boos continues to establish himself in the light market of St. Petersburg. Will all the multibillion profile contracts be in his companies soon?

According to the correspondent of The Moscow Post, Boos Lighting Group, controlled by former Kaliningrad region Governor Georgy Boos, will become the new owner of the production site on the Tallinnskoye highway in St. Petersburg, which belongs to the Rosnano structure. The relevant approval from the FAS has already been received. Does Boos want to get a stronger foothold in the Northern capital in order to achieve access to multibillion contracts for city lighting?

At the production site there are led enterprises of Optogan LLC and Clever PC, which are jointly owned by Boos Lighting Group and Rosnano. Does it mean that one partner will give the other a production site where both "are fed"? Presumably, "friendship" will make a discount. Moreover, since 2018, the state corporation wants to get rid of the asset - they say, it is not a profile one. By the way, experts estimate the cost of the site at 500-550 million rubles.

It is likely that the acquisition of an asset in St. Petersburg is dictated by the desire to get a better foothold in the city, which means - to get the most "delicious" contracts. Recently, for example, Boos’ company aimed at a contract of 1.7 billion rubles for the repair of lighting in the city. Boos did not win.

He probably wasn't much upset about it, though. As a representative of one of the lighting companies told Delovoy Peterburg: "Officials and Boos divided the market long ago. Since 2014, the situation is like this: Boos wins tenders on highways, and receives city contracts on a residual basis."

Boos had made attempts to "build bridges" with St. Petersburg before. For example, as Znak wrote, he gave Alexander Beglov 1 million rubles for the election campaign for Governor of St. Petersburg. But this is what is officially known. Perhaps it is about figures many times more - after all, he has contracts for more than 1 million rubles in the city.

Though, this gentleman "left traces" in the Northern capital. For example, there are persistent rumours that he may be involved in the embezzlement of state funds allocated for lighting the infamous Zenit-Arena stadium. According to the documents, the equipment was purchased for 100 million rubles, but in fact - for only 27 million rubles. George Boos’ BL Group company may be linked with this story - presumably it supplied the equipment.

But this case is not proven. Though the fact that Boos tried to earn extra money by lighting a TV tower in the Petrogradsky district of the Northern capital is known for sure. As reported by Fontanka, last year, the city government revised the investment contract for lighting the object. As a result, only a tenth of the contract amount of 132.9 million rubles was recognized as justified. The contract was signed by SUE Lensvet with Svetoservice-Saint Petersburg, which is owned by Boos.

Around cities and region

Mr. Boos is also "fed" in other regions. Thus, in 2018, a concession agreement was signed for the reconstruction of outdoor lighting networks and the construction of new lines in Volgograd. The planned investment volume was one billion rubles over 15 years, as Volgogradskaya Pravda writes.

In the spring of this year, Boos applied for the right to enter into a concession agreement for outdoor lighting facilities in Izhevsk. Boos is also trying to manage lighting in Shuya (the Ivanovo region). In January 2020, the office controlled by the ex-Governor won an auction for energy saving services in Kaliningrad. The contract price is 99 million rubles, as Klops reports.

However, apparently, something went wrong in Kaliningrad, so native to Boos. According to KGD, in early October, the authorities terminated the lighting contract with his company. There was no scandal - the contract was terminated by agreement of the parties. The relevant document states that the customer and the contractor have no financial or other claims against each other.

Apparently, they still remember the former "merits" of Boos in the region. Let us recall that he left the post of Governor with a loud scandal - mass unauthorized rallies were held in the capital of the region demanding his resignation. As Klub Regionov wrote, the reason for them was initially the introduction of a transport tax. And then the tangle unfolded so that as a result, an 11-point resolution was adopted, including the resignation of the regional Governor Georgy Boos and deputies of the regional Duma from United Russia. Residents complained that the Boos had turned the region into a real breeding ground for corruption.

The ex-head of the region himself, however, believes that he left "beautifully, cleanly". At least that's what he said in an interview with Forbes.

Boos still does not suffer, even loosing the Kaliningrad contract. The former politician has as many as 42 established companies, many of which "fatten" on state contracts. For example, Svetoservice LLC, which has contracts for more than 13 billion rubles. Moreover, some of its assets have some signs of fictitiousness - in particular, it has a minimum authorized capital and a minimum number of employees. 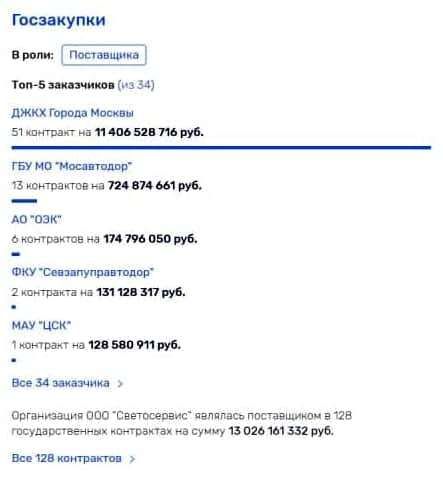 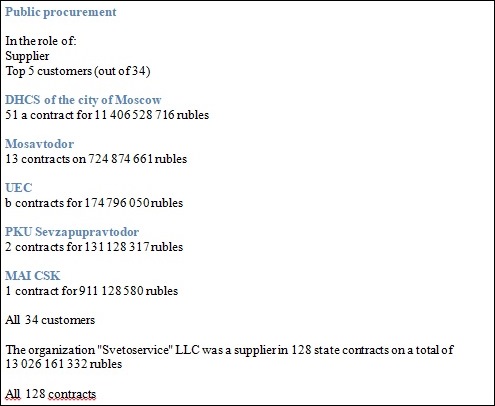 Presumably, Boos "fills his pockets" not only in official ways. The Moscow Post was contacted by Tatiana Kainson-Potapova, who told the story of how the apartment she inherited ended up with Mr. Boos in an incredible way. Real estate is really attractive - housing is located in a famous Moscow house where writer Vasily Shukshin lived and worked.

It turned out that the entrepreneur was a friend of her late aunt, whose sole heiress is Tatiana Kainson-Potapova. And while the latter was abroad, not even knowing about the death of her relative, the documents for the apartment were issued to completely different people. Did Mr. Boos decide to recall the 1990s and to engage in "grabbing"?

There is a feeling that the businessman does not miss a single chance to earn extra money. So, spiteful critics associate him with the story of the smuggling of black sable for $1 billion. According to the authors of the Ruscriminal portal, the FSS allegedly managed to prevent the theft and export of a unique black sable species abroad in 2008. The defendants in the case, which recently surfaced, are the Head of the Federal Service for Veterinary and Phytosanitary Surveillance Sergey Dankvert and Georgy Boos.

It seems that Boos can also be charged in the case of embezzlement of 114 billion rubles in the collapsed Vneshprombank. As RBC wrote, the charges were ultimately presented to the President of a financial institution Larisa Marcus and her brother Bedzhamov. Markus received 9 years in prison, and her relative managed to escape abroad. For a while, the businessman was even wanted by Interpol. According to Vedomosti, he is currently in Monaco.

The case file states that the embezzlement was committed jointly with "unidentified persons". One such person may be George Boos’ former wife, Elena Lirina. Apparently, the ex-Governor parted amicably with her - earlier she owned 11% in Svetoservice. Lirina was the Chairman of the Bank's Board at Vneshprombank and could use the credit institution's funds to develop their business with Boos.

However, despite all the scandals surrounding Boos, he is sure to get new contracts in St. Petersburg, which is so desirable for him, and in other cities. And all because he is not an easy person, but a real old-timer of Russian business and politics.

Boos was previously a Deputy of the State Duma, Minister of Taxes and Duties of the Russian Federation, member of the Presidium of the State Council, and Governor of the Kaliningrad region. During his time in such important government positions, he managed to make a number of useful acquaintances. In particular, he is considered an associate of former Moscow Mayor Yuri Luzhkov. Under him, the current Prime Minister Mikhail Mishustin worked in the State Tax Service. He is also well acquainted with Anatoly Chubais, who now heads Rosnano, whose structure will soon fall into Boos’ hands. Apparently, for a penny?

He also has "spiritual" connections with Russian elites. According to the authors of the Drugoy Roldugin telegram channel, allegedly his godmother is Irina Raber - in 2000-2010, the prefect of the North-Eastern district of the capital with the rank of Minister of the Moscow Government. The godfathers of Boos' daughters are not ordinary as well - previously mentioned Yuri Luzhkov and Head of VEB.RF Igor Shuvalov.

It seems that people with such acquaintances can do anything, can’t they? A whole pile of scandals around him does not prevent him from receiving "fat" state contracts and "tasty" assets. Presumably now Boos has decided to get comfortable in St. Petersburg. Will he "take" all the light of the Northern city soon?