Could ex-parliamentarian Mikhail Slipenchuk have been involved in the disappearance of a top Manager of FSUE Almazyuvelirexport in 2012?

As the journalist of The Moscow Post reports, Presnensky court of the capital considers the claim of the owner of a land plot in Khimki, where investigators of the IC of Russia searched for the body of one of the alleged victims of former employees of the Alpha special forces. We are talking about Alexander Vasiliev, who disappeared in May 2012 and at that time was the head of the platinum Department of the Almazyuvelirexport Federal state unitary enterprise. Shortly before that, funds from the company "leaked" to the Moscow joint-stock Bank (MAB) of the ex-Deputy Mikhail Slipenchuk. Could it be that he was involved in the mysterious disappearance of a top Manager?

The last time Vasiliev was seen alive was on May 29, 2012, when he took $1.5 million from Almazyuvelirexport and told his colleagues that he was going to meet a friend.

For a long time, nothing had been known about his further fate, until the investigation received information that he could have been killed by security forces. There was also an orientation -  allegedly, the body was buried next to the house of the security officer Boris Chukaev, who is accused of organizing several murders and attempts on businessmen.

And in the story of Vasiliev, Slipenchuk's ears "stick out". According to Kommersant, from 2008 to 2011, Viktor Afonin, acting head of the Federal state unitary enterprise foreign Economic Association Almazyuvelirexport, together with his brother Boris Afonin, used firms controlled by the latter to withdraw several billion rubles from Almazyuvelirexport. This was done by entering into loan agreements with MAB under the guarantee of a Deposit of about 8 billion rubles from Almazyverlexport, which was placed in the Bank.

In the end, the entire deposit of the company was "mastered" in this way. And perhaps Mr. Slipenchuk also had a hand in this, didn’t he?

As soon as law enforcement officers took up the Afonins, the MAB itself "collapsed" - in 2016, the financial institution's license was revoked, including due to a lack of its own funds. Now Slipenchuk is successfully engaged in business, works as a teacher at Moscow State University and, according to rumours, even plans to run for the State Duma from the LDPR in 2021.

But the scandalous story with Almazyuvelirexport is not the only one in the biography of the former parliamentarian. In particular, now the financier Vasily Doronin intends to collect 277 million rubles from him, since earlier the latter lent the businessman shares of Gazprom, but Slipenchuk did not return the securities. According to the arbitration file, after Doronin filed a lawsuit against Metropol GC LLC and Donskaya, 13 LLC controlled by Slipenchuk.

Vasily Doronin had been trading Gazprom stocks on the stock market since the late 90's and held them in an account with the largest investment Finance company at that time, Metropol. By 2016, Doronin had acquired 7.5 million securities of PJSC Gazprom, and Mikhail Slipenchuk, who allegedly came up with a whole scheme to gain control over them, could not pass this by. 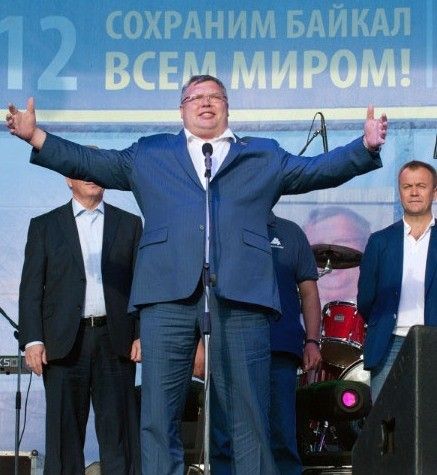 Mikhail Slipenchuk was elected to the State Duma in Buryatia. Will he run for the elections in 2021 from this region?

The businessman agreed with Doronin on a loan of the entire stake in PJSC Gazprom, which belongs to him. There is a version that he allegedly needed them in order to "score points" during the election campaign to the State Duma in 2016. By the way, he was eventually not allowed to the primaries, apparently because of the scandal with foreign assets, as Gazeta N-1 wrote.

For 2016, Slipenchuk even paid Doronin dividends, and then "disappeared from the radar" - neither the stocks were returned, nor the money was not paid. As MK wrote, Doronin eventually went to court, where he won the case, and Slipenchuk was ordered to pay more than 1.5 billion rubles. What is the result? Quite nothing: Slipenchuk did not pay a penny - apparently, not in his rules. At the same time, he does not deny the existence of a debt at all, saying that there is no mutual understanding between him and Doronin regarding the amount of debt, so he is in no hurry to open his wallet.

Slipenchuk "shone" in other bright stories. So, in the early 2000s, he received sole control over the IFC Metropol, which he had previously created together with Aidar Kotyuzhansky. Kotyuzhansky did not want to part with the asset, but changed his mind after several cars exploded next to his parked car. As rumour has it, this action could have been organized in the interests of Slipenchuk.

If this is true, then maybe the ex-parliamentarian is also involved in the story of a suspicious disappearance?

According to the authors of the FBI portal, allegedly Slipenchuk could have a direct connection to the criminal world - they say, through his partner Albert Khudoyan, he was familiar with the "authority" Shakro Young. Is that why he's acting so bravely?

But the entrepreneur was involved in the scandalous privatization of the former monopolist in the Yakut communications market Horizon-RT. As ARD wrote, in 2004, the Government of the Republic sold 24% of the operator for 24 thousand rubles (at nominal value) to an unknown company from St. Petersburg, while the real value of this package was estimated at 380 million rubles. Subsequently, the company's share turned out to be owned by Vasily Vakhrameev, the Director of Horizon-RT, and Gambit-securities BK, registered overseas, which is associated with the name of Slipenchuk. It is not known to whom these shares were sold further. But in 2008, Vakhrameev was convicted of fraud and money laundering in connection with the illegal privatization of Horizon-RT. He was sentenced to six years in prison.

Slipenchuk did not get away with it. Perhaps that is why the companies associated with him do not comply with the requirements of the Prosecutor's office, do they? As reported by Znak, Zapsibgazprom-Gasification LLC was recently fined for not providing certain documents to the Supervisory authorities. At the same time, his offices receive huge loans for the construction of the Ozerny GOK near lake Baikal. And again, are the Supervisory authorities not confused about who they are dealing with?

No luck in business?

But if we study the numerous assets of Slipenchuk, we can't help but wonder - is he doing something illegal? According to Rusprofile, he is listed as the founder of 21 firms, many of which are unprofitable. For example, Sportservice LLC has losses of 2.4 million rubles, Metropol holding company LLC - 141 thousand, Inurekon LLC - 48 thousand, Bakchar steel LLC - 303 thousand. By the way, it looks very strange that a businessman, whose capital Forbes estimated at $600 million, has so many unprofitable assets.

The situation with TDM LLC is particularly interesting. With revenue of 472 thousand rubles, the company has losses of 2 million and only one person works in it. At the same time, Slipenchuk's share in the company is pledged by another co - owner, Yuri Lukyanov. Is ex-MP gradually going out of business? 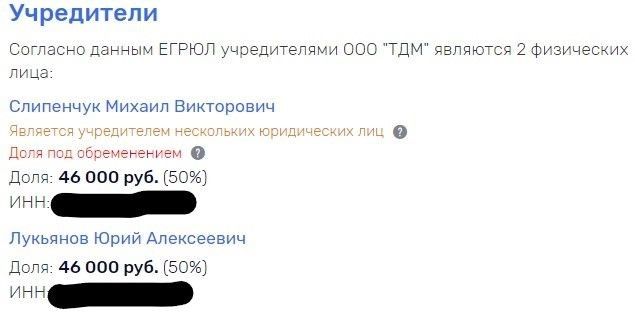 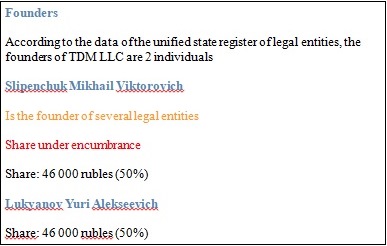 This seems more than real, because in this way he can try to limit himself from unnecessary problems and scandals. Now they are not very useful to him, if he still thinks to run for election to the State Duma.

But it seems that he can now be followed by the stories of past days. What if the mysterious case with the body of Vasilev will give a new turn to the proceedings with Almazyuvelirexport? It is possible that then law enforcement officers can knock on the door of Slipenchuk…