Kreslavsky "buckled" at the PIK team

The head of the St. Petersburg Construction Committee, Igor Kreslavsky, probably using his official position through his company RSTI "provides" PIK Sergey Gordeev with land, which at a reduced price buys the land of the strategic enterprise LOMO.

The scandal unfolds in the Leningrad Optical and Mechanical Association (LOMO JSC). Some time ago, transactions were made to alienate the territory of property complexes on 4 Optikov Street, lit. A, Mikhailova Street, 11, as well as the summer boarding house-hotel "Lada" in the village of Tarasovo, Leningrad Region.

All this is done for the sake of selling Sergey Gordeev to the structures of the PIK corporation. The company wants to buy territories at a seriously (twice) low cost. Moreover, there are no documentary justifications (as the results of assessing the market value of objects, the contracts themselves or other documents). One of the shareholders of LOMO Vasily Ilyichev filed a specialized developer with PIK in court.

As the correspondent of The Sankt-Petersburg Post managed to find out, PIK can patronize this story with a face much more serious than a certain number of LOMO shareholders. Details - in the material The Sankt-Peterburg Post.

How the strategic plant "derbanili"

LOMO was previously the world leader in the production of optical devices. The company fulfilled orders from the Ministry of Defense, Roscosmos and other departments of the country.

Then the 90s happened, privatization and now the plant is rapidly approaching bankruptcy. And it seems that this is only condoned by both its heads and the leaders of construction corporations - in order to pick up a tidbit of land. Recall that now we live in conditions when we need to develop import substitution at an accelerated pace - instead of re-profiling the plant for state needs, they simply plan to demolish its areas.

They started talking about the transfer of land to private hands for a long time - the general director of the enterprise, Alexander Aronov, who has been working at the enterprise since 1976, spoke. But it seems that he is not advocating for its preservation. In 2020, the Neva boarding house in Sochi and the building on Chugunnaya Street in St. Petersburg were sold. Vasily Ilyichev also tried to challenge the transactions, however, he did not seem to succeed.

The construction holding "RSTI" petitioned for the transfer of specifically "LOMO" to Optikov, Mikhailov and in the village of Tarasovo. From him, the government structures of the city received proposals to amend the General Plan, relying on the fact that the LOMO sites are not used as previously, but are leased. So it would be great to demolish them and, in fact, give the territory to developers who can make money on it.

The future of LOMO employees seems to worry everyone interested in this story least of all.

"RSTI" belongs to the Kreslavsky family - the very (judging by the entry of the Unified State Register of Legal Entities) head of the Construction Committee and Nina and Fyodor Turkin say that the latter, the stepfather of Igor Kreslavsky. In 2001, he founded Baltinveststroy, which later became part of RSTI.

Once again, we recall that Igor Krselavsky is none other than the chairman of the construction committee of St. Petersburg. He came to this position in January 2020 and in the same period RSTI, which had previously occupied a significant market share, turned around in the Northern Capital to the fullest. 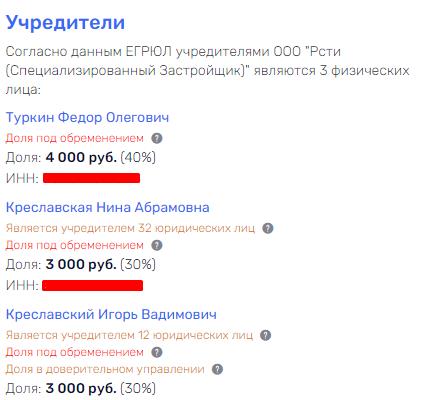 The shares of the founders of the company in the pledge with Bank DOM.RF. That is, it is essentially funded by the state. Photo: https://www.rusprofile.ru

Now the developer is building New Time, Time Square, Terra residential complexes in St. Petersburg. The developer is building the last two residential complexes on the once wooded territory opposite the Yuntolovsky reserve. Some buildings are already inhabited. However, there is no equipped pedestrian road to them. People who go to work are forced to put themselves at risk every day by walking along the road for cars, the speed limit of which is usually observed within the city-wide (about 60 km per hour). 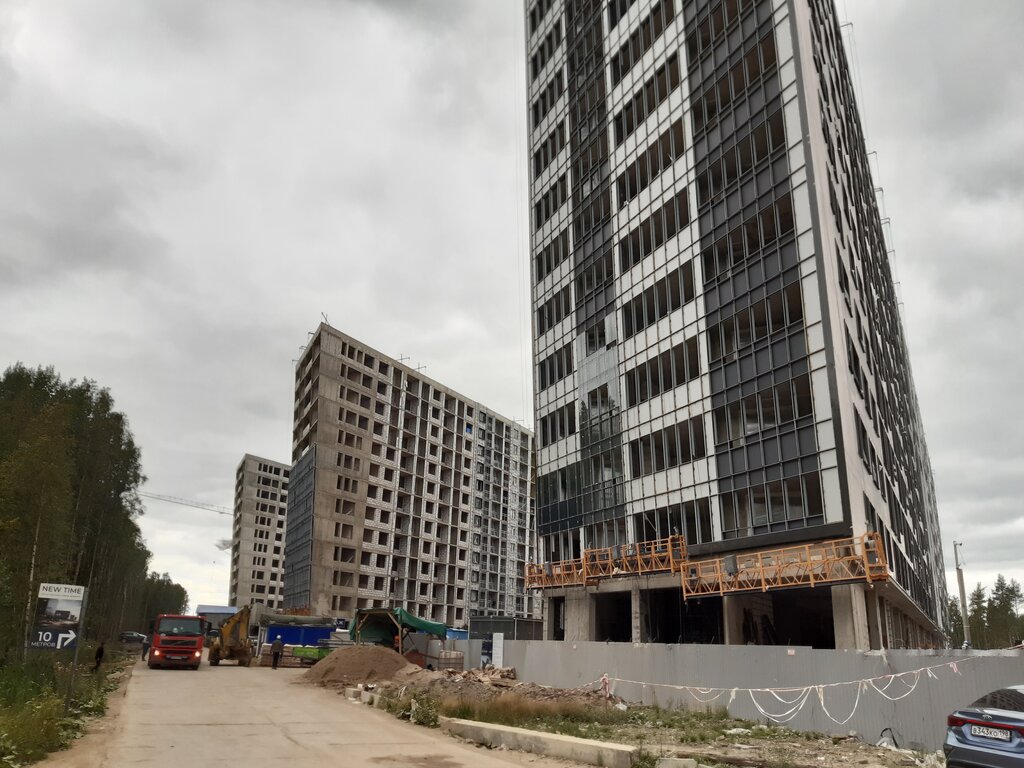 With a very expensive cost (odnushka on the outskirts of the city can now be purchased for about 6 million rubles), the quality of construction leaves much to be desired. Locals complain about "cardboard walls," unequipped courtyards, an unpleasant smell and stuffiness in the entrances. But real estate agents continue to push the developer's projects to gullible new settlers, and he continues to seize the market, which Kreslovsky himself probably allocates to him.

A criminal case that has not been opened

In 2020, almost immediately after Kreslavsky came to power in Smolny, companies close to his family took up the conversion of the Lenexpo sites into an antique hospital. They took more than 400 million rubles from the budget for this and built a thoroughbred breeding ground for coronavirus. It was reported that the air temperature in the "hospital" forced people to sleep in warm clothes, while there was such stuffiness in the pavilion that the elderly lost consciousness. In addition, the air between the "green" and "red" zones was not filtered, which turned the pseudo-hospital into an ideal place for re-ignition. " 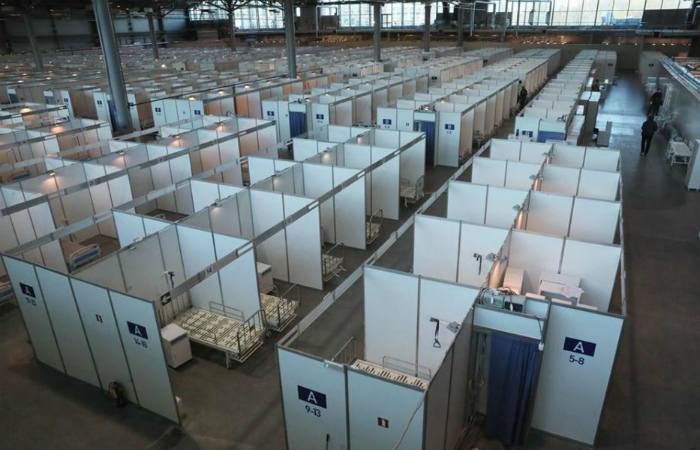 Antique hospital in Lenexpo. Photo: the official page of PJSC Gazprom on the social network Facebook (social network is prohibited in the Russian Federation; it belongs to Meta Corporation, which is recognized as extremist in Russia)

A year later, the authorities of St. Petersburg announced that they would re-equip the hospital of St. George the Great Martyr - to build a new building. And the contract as the only supplier went to Lentekhstroy, a company close to Mr. Kreslavsky. The Moscow Post covered the story in detail. In general, in terms of public procurement, Kreslavsky's holding is not deprived.

Hereditary builder under the cover of oligarchy and officials?

What provides Kreslavsky with such a deafening success - despite all the scandals? Apparently, the stepfather Fyodor Turkin moved to the government of Kreslavsky. This person has the award "honorary builder" and "good connections in Smolny." In 2010, he even ran for the State Duma, but lost the election.

The relatively newly made official has other connections - he is often seen in the company of billionaire and head of the KVS construction company Sergei Yaroshenko. The latter is considered a friend of the former vice-governor of St. Petersburg for the construction of Roman Filimonov, who now works at Ilim.

By the way, Filimonov was referred to the entourage of Defense Minister Sergei Shoigu (they worked together at one time). And his (Filimonov) surname was mentioned in 2015 when discussing the scandal about the transfer of classified information to the Ministry of Defense through free mail servers. The hacker group Anonymous International intercepted documents stored almost in the public domain by Filimonov's former permanent assistant Ksenia Bolshakova, Fontanka reported.

Thus, influential people can stand behind Mr. Kreslavsky, who move forward the hereditary builder. And he, in turn, seems to have concluded some kind of mutually beneficial agreement with Sergei Gordeev's corporation.

But this developer also has a very dubious reputation - at least the bankruptcy of subsidiaries, which has recently been flooding on PIK, causes fears. There is reason to believe that Gordeev is going to wind up his shop, but having previously earned the maximum on the same deceived equity holders. 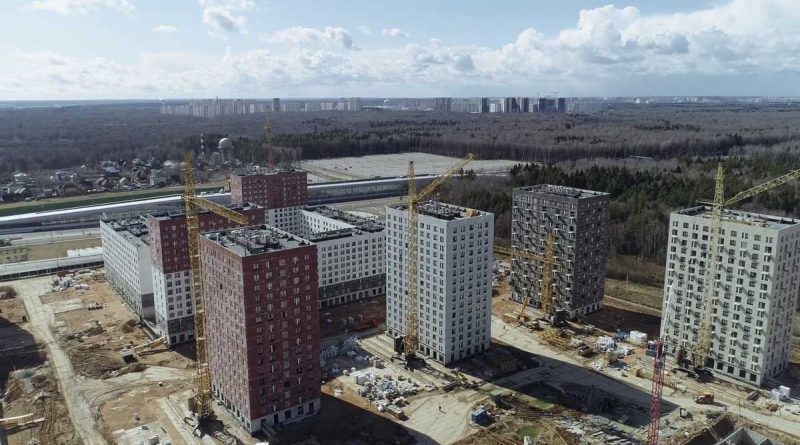 The LOMO place on Optikov will be worth buying apartments of sky-high money - there are two metro stations, several transfer hubs, trams and buses under the windows nearby. In 15 minutes - one of the best city parks on the island - CPKIO. Lakhta Center, Three Hundred Years Park and Krestovsky Island are accessible in caves. No matter how the throwers went bankrupt on a rash purchase, they never waited for their apartments.

Not to mention the fact that the quality of construction of PIKovskie houses is even worse than that of RSTI. Mold, flooded basements, numerous violations during construction - this is just a small one that the residents of the complexes face.

And the owner of PIK, Sergei Gordeev, may soon become a defendant in a criminal case - a subsidiary of the company also built an antique hospital - only in Murmansk. Unlike St. Petersburg, it did not even open, so an audit was organized and it turned out that the money could settle in the pockets of the former Deputy Minister of Emergency Situations Andrei Gurovich.

It seems that PIK has also reaped, which, by the way, built all this business with numerous violations. It remains for Gurovich to begin to cooperate with the investigation, and the entire Gordeev empire can metaphorically burn down as quickly as the hospital built by his company could actually burn down.

So there is a possibility that Kreslavsky will be fat "dumped" for a "place in the sun" in the LOMO squares, and later abandoned to rot. Here our benefactor will appear and push his "RSTI" to the site of the former plant. They will earn twice.

At the same time, RSTI is completely under bank encumbrance, which indicates the actual lack of money in the corporation. It seems that the folding and going into bankruptcy once awaits this developer. In the meantime, Kreslavsky enjoys his position at the helm of the construction market and cooperates with those to whom the soul is drawn.

22 September, 8:28
PIK does not pull the responsibility of Gordeev
See also