Korovayko's "cheating game" in the Duma

What purpose did the owner of the Pokrovsky Concern Andrey Korovayko have in mind, probably sending his lawyer Roman Grishin, with a reputation as a sharper and provocateur, to the Rostov Duma?

According to the correspondent of The Moscow Post, Andrey Korovayko, known for an unfriendly style of doing business in the southern lands of the Pokrovsky Concern GC, is most likely going to send "his man" to the Duma of Rostov-on-Don.

It is about a lawyer Roman Grishin, who in various media publications is mentioned as a possible representative of the Concern's interests. He was also seen in several provocative cases related to farmers' protests, and allegedly has a million-dollar gambling debt. Was he, as it seems, forced to win back their losses in a peculiar way?

May Andrey Korovayko be increasing his influence in the parliamentary field? If this is true, what interests can his "puppet" lobby for? Recently, his attention has been focused on one successful Rostov enterprise of the SKVO ACJSC. Various old schemes, which knowledgeable people refer to as law enforcement and force pressure, have already been undertaken to seize the asset. However, the plant has survived so far.

It is possible that now within the framework of the administrative resource, Senator from the Rostov region Irina Rukovishnikova can represent the interests, since she is Korovayko's ex-wife. However, it seems that the reputation or loss of influence does not provide sufficient lobby for the progress of the case.

According to the election commision, Grishin goes to the Duma of Rostov-on-Don as a self-nominated candidate for the Zheleznodorozhny single-mandate district No 8. In the column "activity" it is indicated that Roman Valerievich works as a lawyer.

According to the authors of Rostov_Com, allegedly it is in this district that police investigators serve orders of the Pokrovsky Concern. It is possible that now he is allegedly "just bought" a seat in the Duma, so that it is easier to promote the interests.

There are very unflattering statements about the figure of Roman Grishin. The same Rostov_Com portal indicates that he is quite tongue-tied and it will be difficult to win the election campaign. In addition, according to the same authors, he is a passionate card player, and at one time owed about 6 million rubles.

Well, according to notes on the Internet, his reputation is not the people's choice!

The professional qualities of a lawyer are also questioned. He is called nothing less than a provocateur and fabricator of criminal cases. In particular, allegedly he is no stranger to bribing false witnesses in the interests of the concern. 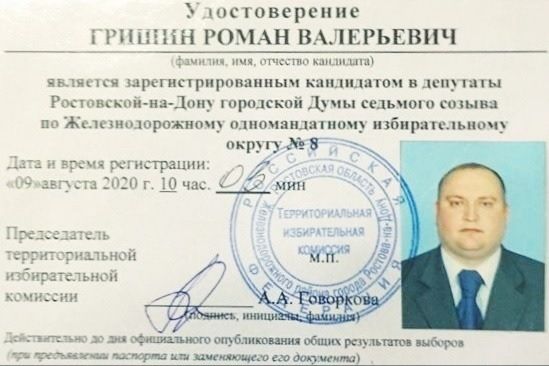 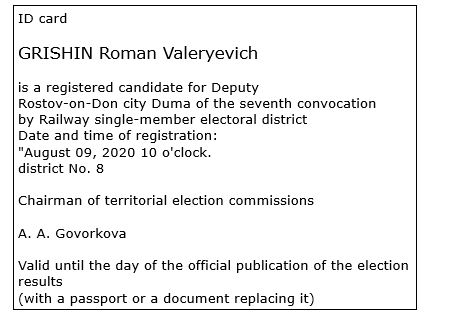 For example, at one time, the authors of the PravdaRostov portal wrote, that allegedly as Roman Grishin together with four other lawyers, participated in a provocation, carefully prepared by the Concern, for the unfriendly seizure of land and business in the Krasnodar territory and the Rostov region. According to the portal, this project was called "Tractor March of Kuban farmers" and was covered only by the media, which could be paid by the Concern, in fact, as well as the farmers who spoke in the project, and the lawyers allegedly beat out false statements.

The rate for the Parliament

Apparently, Andrey Korovayko decided to pump the administrative resource harder. It is possible that Irina Rukovishnikova, who helped before, lost weight in "pushing interests". And this can be seen in one of the enterprises that Korovayko set his eyes on.

Now the Concern's structures seem to be trying to "add to their moneybox" one of the most successful enterprises in the Rostov region, the SKVO agricultural cooperative with a production turnover of 40 thousand tons of grain per year.

Previously, it was managed by Vladimir Kasyanenko. But in 2015, he died, and was succeeded by his wife and daughter Anna, who began to manage the company. But Vladimir Kasyanenko had another son, Denis, from his first marriage. It is through him and his mother Anna that representatives of the Concern act, Versia believes.

According to the publication, under the guidance of the Concern's lawyers, they write statements to law enforcement agencies and file lawsuits in the courts. All the time, attempts are being pursued to transfer an economic dispute to the criminal plane under article 159 of the Criminal Code of the Russian Federation, which requires only witness testimony to be initiated. According to various publications, representatives of the Concern are doing just that.

The scale of the plant's pressure can be assumed not only by dozens of lawsuits, but at least because Irina Rukovishnikova could go even to the Head of the IC to solve the problem. As the journalist Yevgeny Mikhaylov told in the video Is the Rostov senator capable of such a thing, Rukovishnikova allegedly met with the Head of the IC Alexander Bastrykin and asked him to take control of several criminal cases initiated by representatives of the Pokrovsky Concern.

It is noteworthy that then the journalist found a funeral wreath at his car, and after the release under the title Non-random corpses in the struggle for land, he was attacked.

There is some kind of the "Pokrovsky" style…

Achieve by a touch of influence

Before becoming a beneficiary of the Pokrovsky Concern, Andrey Korovayko was a Federal inspector of the representative office in the Southern Federal district. The Concern itself was founded in 2003. Now there are three dozen companies that have a complex ownership structure.

Korovayko's possessions are hectares and agricultural enterprises in the Krasnodar territory and Rostov region. In the latter, there is also a development business. According to RBC, in 2016, Pokrovsky entered the rating of the largest Russian landowners according to BEFL, taking the 18th place with 200 thousand hectares.

According to Forbes, Pokrovsky has 35 enterprises in 5 agricultural sectors: crop production, dairy and meat farming, meat processing and sugar production. The land Bank of the Concern has 240 thousand hectares of land, and the collection of agricultural products is 1.6 million tons.

In the rating of the largest landowners according to Forbes, Pokrovsky ranks fifth with a land valuation of 31.2 billion rubles.

At the round table in AiF representatives of the Concern told about themselves that the main activities of enterprises are deployed in the territory of the Krasnodar territory and are carried out mainly in the agricultural sector. Total revenue for 3 years was more than 95.1 billion rubles, and the amount of taxes paid to the budget — more than 10 billion rubles.

Pokrovsky, it seems, began writing his history beginning with the strange story of the change of owners of the Rostov plant called Samtrest. As Forbes wrote, armed men broke into the office of the owner and Director of the plant Bondo Babunidze and forced the entrepreneur to sign IOUs. And after that, the winery passed "for debt" in the possession of the Eridan-Yug company, one of the founders of which was the brother of Korovayko's wife. This was also described in detail by The Moscow Post.

It is noteworthy that such a likely scheme of work has been operating for almost 20 years. A letter, revealing the style of doing business by Korovayko came to the editorial office of The Moscow Post. In particular, from a certain citizen who even went to prison because of the fabrication of a case against him.

Here a joke could be used, saying, it is good, that he was not killed. But tongue refuses to say so,  when you hear another story about Pokrovsky. Last year, the former wife of Kushchevsky bandit Vyacheslav Tsepovyaz was found unconscious. Natalia Strishnaya fell into a coma. As Komsomlskaya Pravda wrote, a note was found next to her, in which she indicated that she could no longer withstand the pressure that Andrey Korovayko, in particular, exerts on her. Doctors managed to bring the woman back to life. Meanwhile, Korovayko "aimed" at assets.

Why can such people move their own candidates to the Rostov Duma?