Khusnullin and his "favorites"

How Deputy Prime Minister of the Government Marat Khusnullin can keep and multiply his "capital" through relatives, former spouse and close friend.

As it became known to the correspondent of The Moscow Post, in January-February 2021, the group of development companies Granelle took the first place in Russia for the commissioning of housing. According to rumours, the former Vice-Mayor of Moscow and current Deputy Prime Minister Marat Khusnullin could patronize the company, under which the company's Moscow portfolio grew significantly. Who can be interested in the "expansion" of the company?

Recently it became known that the first heated surface metro station Novomoskovskaya of the Sokolnicheskaya line of the Moscow metro will begin to be built this year. Engineering solutions for this are being developed by Mosproekt-3, which is considered close to Mr. Khusnullin. Until 2015, the company was headed by Pavel Bataykin – a man who arrived in Moscow in Khusnullin's "retinue".

In 2013, under his management, the office was incorporated, then it included JSC MNIITEP 9Moscow Research and Design Institute of Typology, Experimental Design) and JSC Mospromproekt. Thus, all the major project assets of the capital were consolidated.

Now Mosproekt-3 is headed by Anna Merkulova. As Infox wrote, the woman has a warm relationship with Khusnullin. If this is true, then it is not surprising that she has significant work success: recently, she even received a medal of the Order of Merit for the Fatherland, II degree for her work in the company. She, probably, worked  "hard", doing her best for the country.

By the way, about the ladies: the chief specialist of the GAU MOSGOSEXPERTIZA (State Autonomous Institution of the Moscow City Moscow State Expertise), Lyudmila Cherepenina, may also be well acquainted with Khusnullin. She also demonstrates remarkable success: according to the Stroyexpertiza. Tatarstan Republuc magazine, she became the best estimator in 2020. She also recently upgraded her qualifications at the Higher School of Economics. Did the Deputy Prime Minister himself invest in its education?

However, let's look at the real results of the work of his likely proteges. If you look at the financial performance of Mosproekt-3, Merkulova's success is no longer staggering: with revenue of 4.7 billion rubles, the profit is only 156 million rubles. Wheredid such a "backlash" come from?

At the same time, the company's portfolio of state orders amounts to more than 16 billion rubles, 6.7 billion of which was brought by cooperation with the Moscow Construction Department, which was once headed by Khusnullin. Has he still got the right connections in the department? 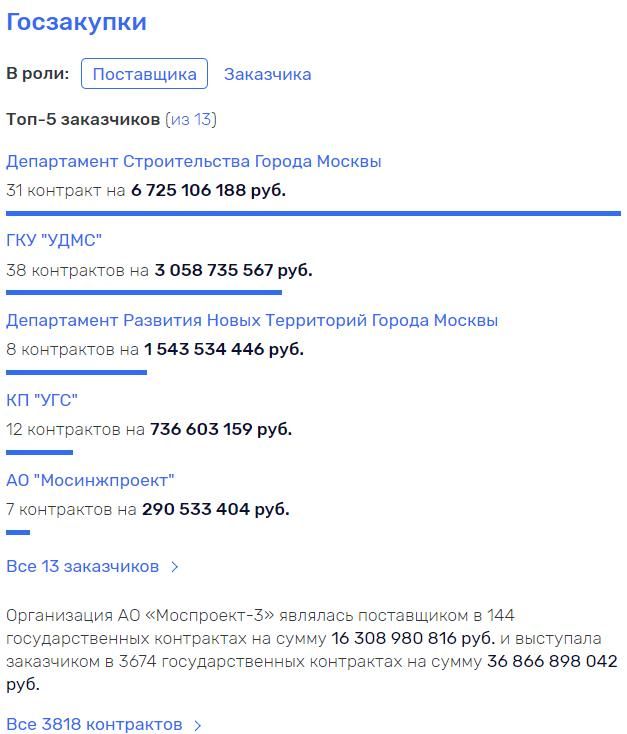 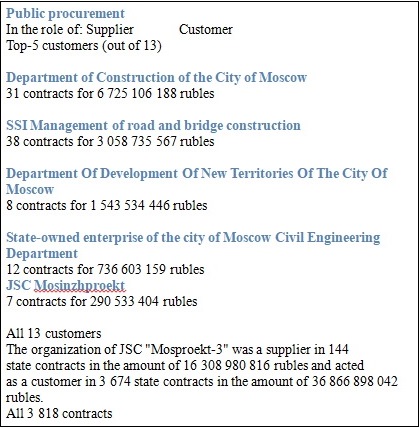 At the same time, Mosproekt-3 can earn money not only in Moscow, but also in the Urals. Last autumn, it became known that a clubhouse will appear in Yekaterinburg, opposite the UMMC arena under construction. The construction of luxury housing is planned to be done by Prinzip, and the design is planned by the Moscow T+T Architects bureau.

If it was unknown who might be involved with it, some people could think that it was a "pocket" company. Judge for yourself: the authorized capital of 10 thousand rubles, 35 employees, director and founder - a certain Sergey Trukhanov. Nevertheless, the company somehow got contracts for almost 20 million rubles,  the  top" customer is the same Mosproekt-3. Does the last bureau control it?

In the Urals, people from the team of Moscow Mayor Sergei Sobyanin are favoured: it is rumored that the head of the Sverdlovsk region, Yevgeny Kuyvashev, is the "man" of the capital's Mayor.

In the context of this, it becomes clear why T+T Architects could "cooperate" so well with the Prinzip of the Sverdlovsk entrepreneur Gennady Chernykh. The companies have previously created projects of the residential complex Lenina, 8 and Alexander Garden. Recently, it also became known that Prinzip together with the Corporation for the Development of the Middle Urals will be engaged in the construction of housing and an investment cluster in Yekaterinburg. The investment project is designed for 20 years and is estimated at 250 billion rubles. Can T+T Architects also "surface" in this monetary story?

Many people really have questions about why Chernykh left such a profitable project, because the entrepreneur recently complained that he did not have enough money to build a school, as Ura.ru wrote. All because he may be connected with the capital's companies, which, according to rumours, are related to Marat Khusnullin himself?

Family ties covering half of Liechtenstein?

Khusnullin's assets are presumably registered to his female relatives. As Kommersant wrote, assets worth more than 3.2 billion rubles are found to be owned by the family of the Deputy Prime Minister. In particular, it manages a portfolio of land plots in Tatarstan with an area of more than 8.5 thousand hectares, which is only half the area of Liechtenstein. These "lands" are divided into three closed-end share funds: IART Development, Rost Real Estate and Rost Development. One of the shareholders is the daughter of the politician, Alina Kireeva (formerly - Khusnullina). At the same time, the funds are managed by the ACTIViST company, the sole owner of which is 75-year-old Roza Khusnullina, who is the full namesake of the mother of the Deputy Prime Minister of the Russian Federation.

It is noteworthy that once Khusnullin himself said that his parent "never owned any capital" and lives very modestly. Apparently, driving the car Toyota Highlander, the cost of which is estimated at more than 3.5 million rubles, is "modest" for the Deputy Prime Minister. It is such a car that is registered to the pensioner Rosa Khusnullina.

Not much is known about Khusnullin's daughters. As he himself reported to Meduza (recognized as a foreign agent in the territory of the Russian Federation), he gave an apartment, the market value of which is estimated at 230 million rubles, to the youngest of his daughters, Malika Khusnullinain 2016. However, where he got the money for such housing is unclear, because his annual salary at that time was at the level of about 7 million rubles.

Alina Kireeva, the daughter of the Deputy Prime Minister earns her own "wishlist" - according to Rusprofile, she registered an individual entrepreneur back in 2011. At the same time, when she was only 20 years old, according to rumours, she became a co-owner of the Chistopol Hotel. It is difficult to confirm or deny this information: according to the company’s card, the first extract from the Unified State Register of Legal Entities is dated only in 2014. However, we will mention one interesting fact: it is known that Marat Khusnullin spent most of his childhood in Chistopol. None of this seems like a coincidence.

In addition, Kireeva may well conduct her business through her spouse - in 2013, in Italy, she married Yevgeny Kireev, whose father Sergey Kireev is the general director of the Novorossiysk Commercial Sea Port. Is it necessary to clarify that just after the conclusion of the marriage union, the NCSP's affairs went "uphill"? For comparison: in 2012, the company's revenue was 11 billion rubles, and profit - 5.1 billion, and now - 28 and 59 billion, respectively. That is, the company somehow has even more income than it earns. 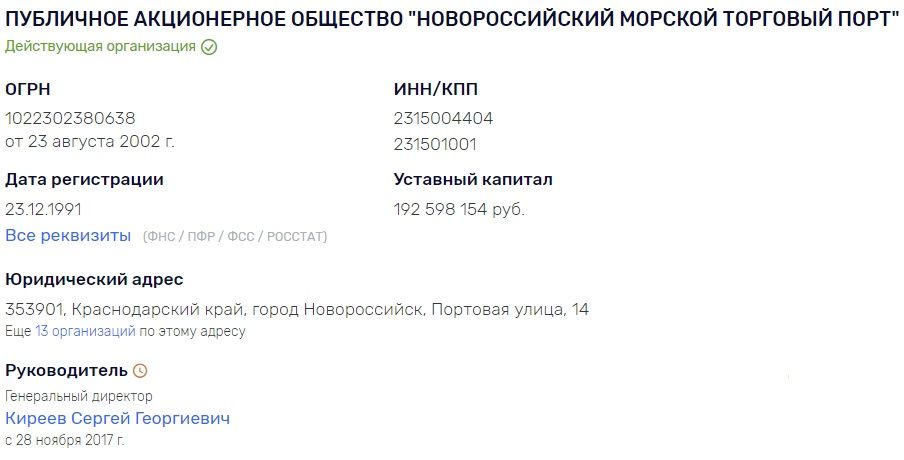 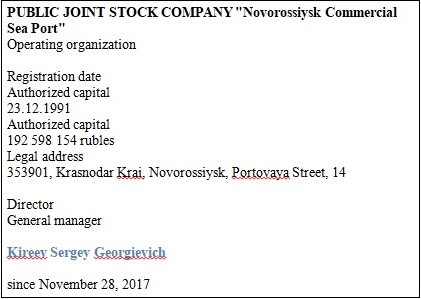 According to the authors of the Open media portal, allegedly shortly before the wedding, Kireeva became the owner of significant agricultural land, most of which she bought from the Invest Plus company. The latter belonged to her mother, at that time Khusnullin's wife, Lilia Kharisova until 2014.

As was written by Moscow Monitor, the former wife, Lilia Khusnullina-Kharisova, owned the largest clay deposit in Tatarstan. In 2014, Kharisova entered the top 50 richest wives of officials according to Forbes, taking 40th place, with an income of 42 million rubles. Khusnullin himself then noted that his wife received such an income because of the sale of the house, and the clay deposit cost one million rubles.

It seems that all the women in Khusnullin's inner circle have remarkable entrepreneurial and managerial qualities. However, isn't the reason for their success the connection with the Deputy Prime Minister? As a generous gentleman, he did not skimp on "gifts" to his ladies, who can be useful to him, did he?