"It's time to admit the obvious": what is Russia and the world waiting for after the decision on the LDPR?

Recognition of the LDPR does not mean Russia's withdrawal from the Minsk agreements, but gives security guarantees to residents of the republics and can become part of a larger deal between Russia and the West.

Russia recognized the Donetsk and Lugansk People's Republics as independent states. The corresponding Decree was signed last night in the Kremlin by Vladimir Putin. Agreements on friendship, cooperation and mutual assistance with already recognized republics were signed there.

On the morning of February 22, there were reports that Putin ordered the Russian armed forces to "carry out peacekeeping functions" in the DPR and LPR. The situation has reached a new stage. The Moscow Post examines the causes and possible consequences of these decisions.

Last day on February 21, as well as the night of February 22, 2022, became historical not only for Russia, but also for the whole world, and certainly for Europe.

Russia has long tried through diplomacy and negotiations to persuade Ukraine to implement the Minsk agreements. In recent months, it has finally become clear: Kiev is not going to go to their implementation. That is, there was no real movement towards peace, no real reintegration of Donbass into Ukraine in eight years. Not even the start of this process was given. But shelling intensified, and Ukraine is literally pumped with Western weapons.

It seems that the Kremlin has finally lost hope that the situation will be resolved on the platform of the Minsk negotiation process. At the same time, formally, Russia did not violate any points of the Minsk agreements, so their implementation still remains relevant for all signatories. With the difference that no one can say - what, in fact, should Russia fulfill?

Vladimir Putin's appeal to the Russian people in connection with the decision to recognize the DPR and LPR. Video: "Channel One."

The decision to recognize LDPR is largely forced. Last day, a meeting of the Security Council was held in Moscow, where the issue of Russia's possible recognition of the independence of these republics was discussed. All members of the Security Council talked about different things, made different arguments. Later, when the decision was made, Vladimir Putin made an hour-long appeal to the nation, where he spoke in detail about the motives.

In fact, we saw a deep analysis, an audit of Russia-West relations in general and Russia-Ukraine, in particular, over the past 30 years. Putin emphasized: the Russian Federation recognized a new geopolitical reality after the collapse of the USSR. Moreover, our country provided the former Union republics with all possible assistance and support.

It is a false thesis that Russia does not respect and has never respected Ukrainian statehood. Not only respected, but also helped in every way financially. From 1991 to 2013, the amount of this assistance in various forms exceeded $250 billion. As a result, we did not get a good neighbor, but a real dependent, who from the very beginning began to build his statehood, denying everything that united our countries in the past.

Meanwhile, Putin deeply analyzed the causes of the collapse of the USSR, which he sees in the deep, systemic mistakes of the Bolsheviks during state construction, as well as in the future - party nomenclature. The thesis was absolutely argued that modern Ukraine, in fact, was created according to the patterns of Vladimir Lenin, "pumped up" by the historical territories of Russia and other states.

Finally, the formation of the Ukrainian SSR ended with the transfer of Crimea. Prior to this, western territories were annexed to Ukraine following the results of World War II. At the same time, Ukraine does not have strong, long-standing traditions of statehood. And she always built it on other people's examples, on other people's patterns.

As for the actions of the United States and NATO, at one time Russia was convinced: the entry of the countries of the former Warsaw Pact into NATO would create a "belt of friends" around Russia, destroy old fears. It turned out exactly the opposite - countries such as Poland and the Baltic states brought their fears and complexes to the Alliance, and instead of the "belt of friends" NATO military bases began to multiply around Russia.

After there was a coup in Ukraine, then a civil war provoked by Kiev. And the past eight years have convinced: the rebel Donbass, despite all the rhetoric, neither Kiev nor even their Western allies need it.

Meanwhile, about 800 thousand people live there. Our country has neither the moral nor the legal right to turn its back on them. And the growing military provocations on the demarcation line in recent days justify the worst fears: after two unsuccessful attempts to resolve the issue by force, Ukraine is preparing a third. We can't let that happen!

Slightly stepping back, it is worth clarifying: it seems that the last straw was just Kiev's refusal to directly negotiate with Donbass, although this is provided for by the Minsk agreements.

At the Security Council of the Russian Federation, Dmitry Kozak, special representative of the President in the Tripartite Contact Group on Resolving the Situation in Ukraine, spoke. The author of these lines has long been following the political agenda, and knows Kozak as a firm, one might say, cold official who never shows emotions. At the same time, he hardly restrained his disappointment. It was clear how much effort he personally invested in these negotiations. The result is complete sabotage by opponents.

At the same time, the pumping of Kiev with weapons from the United States and European countries continues. Aggressive rhetoric continues. Under the guise of training centers in Ukraine, the bases of foreign countries have already been deployed and are operating, foreign instructors are working.

In all strategic documents of Ukraine, the USA and NATO, it is Russia that is indicated as the main enemy. Given the "clogging" of the Minsk process, the continued military development of Ukraine and the ongoing shelling of civilians in the Donbass, the decision to recognize the Republics can be called expected. Maybe even a little late.

Part of the deal?

Meanwhile, many analysts are convinced: Vladimir Putin could make a deal with Ukraine's Western allies, at least with the United States. After all, recognition of the LDNR is to some extent beneficial to the name and even to the Ukrainian leadership.

As for people living in LDPR, they will receive security guarantees, and probably better living conditions in those territories. Of course, thanks to the help of Russia. Western partners of Ukraine, including the United States, are withdrawing responsibility for Kiev's implementation of the Minsk agreements. In Kiev, the topic of the Minsk agreements also falls away from itself - they have already called Russia's recognition of the actual withdrawal from the agreements.

Russia gets the opportunity to deploy troops in the Donbass and protect people, but will inevitably face serious sanctions. In the coming days, it will be clear how serious they are - and against this background it will be possible to judge whether there were any agreements.

The Kremlin is convinced: Russia is a much more important country for Europe and the whole world than Ukraine. Therefore, time will put everything in its place. However, everyone is also convinced that with the deployment of Russian troops in the Donbass, the threat of a full-scale war is increasing - now directly Ukraine with Russia. 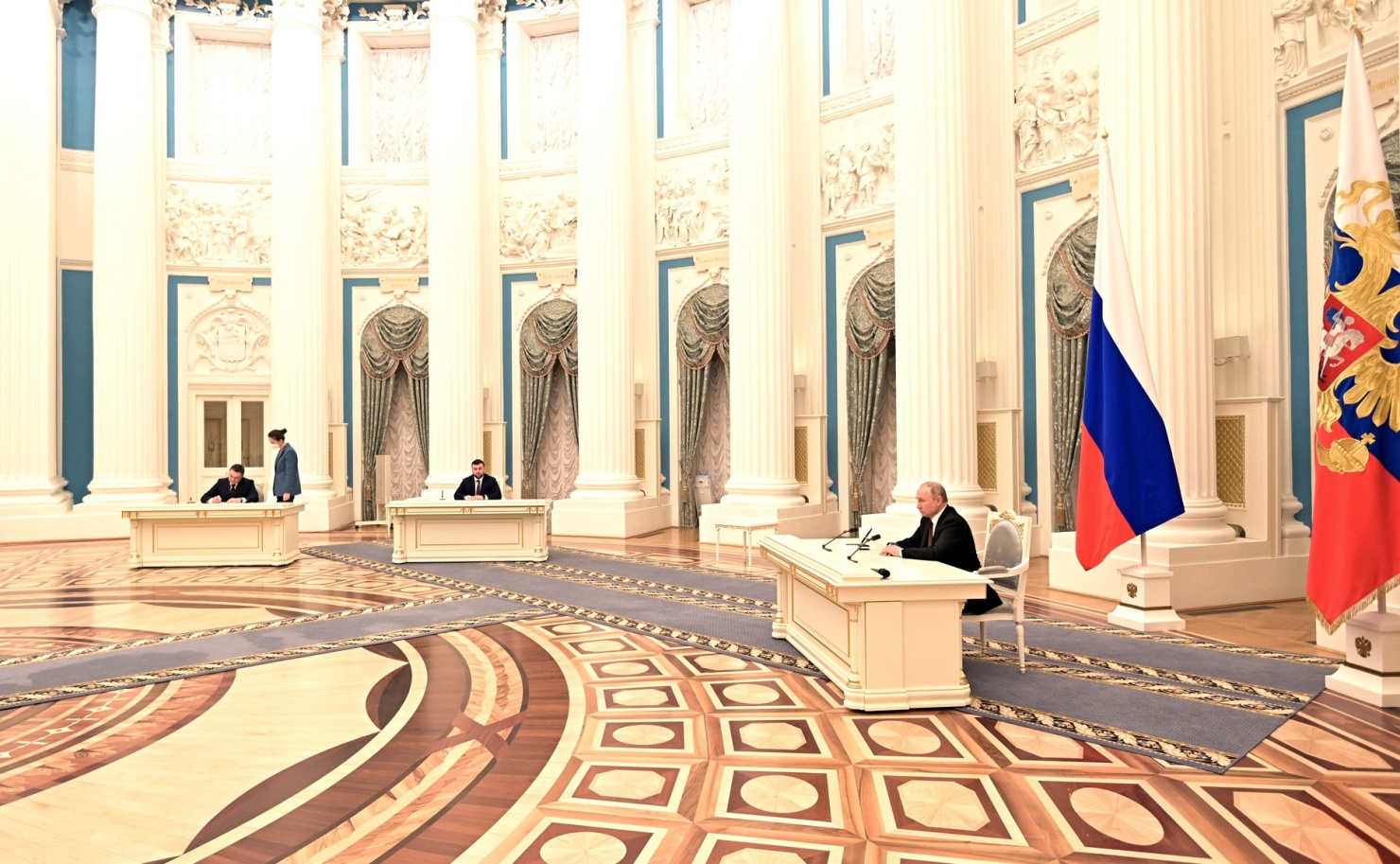 The same may give impetus to negotiations on security guarantees for Russia and the whole world. Perhaps this is really only part of the emerging deal, where Ukraine is simply taken out of brackets for complete unfit and incapacity for constructive relations. Let it remain a pain point through which you can put pressure on our country.

At the same time, there is little doubt that the current decision was voiced in one way or another and agreed with the PRC. The level of hysteria in the Western political establishment and our real prospects for further overcoming sanctions pressure will largely depend on the reaction of the Middle Kingdom at the political level.

What will happen next specifically for Russia? In this regard, the deputy head of the Security Council Dmitry Medvedev was the first to speak out, who himself in 2008 as President decided to recognize Abkhazia and South Ossetia after the Georgian aggression.

"We know what happens next. Again, sanctions, threats, political pressure from different sides. Crazy screams and streams of misinformation. All this we have already passed and have long ceased to be afraid. We have strong nerves, "Medvedev said. And then he made a prediction: "experience shows: sooner or later, opponents themselves will come to us with a request to return to the negotiating table. This is inevitable given the role of Russia. And history will confirm our correctness. "