Hunting: who will be the victim - shot Salnikov or General Baranov?

In a strange story, the interests of the head of the Ministry of Internal Affairs Kolokoltsev and the mayor of the capital, Sergei Sobyanin, could converge with a sensational general hunt in the Tver region.

According to the correspondent of The Moscow Post, at the moment a high-profile scandal with the "general hunt" is actively developing, on which another tragic incident occurred. We are talking about a case in the Tver region with the participation of the head of the Main Directorate of the Ministry of Internal Affairs of Moscow Oleg Baranov, during which a local resident Vyacheslav Salnikov was wounded from a gun.

In this story, many interests could converge. A number of sources of our publication expressed the version according to which the hunt itself (both the shot and further events) could be part of some planned provocation - and from the unexpected side. There are suggestions that the ultimate goal of this shot could even be the Moscow mayor Sergei Sobyanin.

The conversation that Sobyanin could have long developed a conflict with Interior Minister Vladimir Kolokoltsev has been going on for a long time. Moscow is a huge city, both officials are extremely resource people who should guess big business. The Moscow Post wrote about similar precedents more recently.

Already there were versions that Sobyanin could be profitable to substitute Oleg Baranov as 100% creature Kolokoltsev. As if even the mayor of Moscow asked Kolokoltsev to appoint another person more loyal to himself as the head of the capital's main police department, but the head of the department could be stubborn.

Such an option for the development of events is not excluded, when instead of Salnikov a bullet could still hit the animal, as happened with the "casus of Valery Rashkin," but in the end Baranov would still be a violator, because the moose hunting season officially closed almost a week ago.

In any case, incomprehensible points that allow us to build conspiracy theories are still more than enough.

The victim Salnikov was promptly taken to hospital, but there is still no reliable information about his condition and whereabouts.

As for who actually shot him, too many are inclined to believe that it was Oleg Baranov who could shoot. No official confirmation of this information has yet been received.

On the other hand, oddly enough, representatives of the Moscow Main Directorate of the Ministry of Internal Affairs remain silent, which in itself leads to thoughts - either cannot identify the shooter or decide who to make a "switchman."

Of course, all points over "i" should be placed by the investigation. We, as journalists, will draw the attention of readers to several interesting facts. The Investigative Department of the Investigative Committee nevertheless began a procedural audit. Although when it became known about Salnikov's injury, and who was present at the ill-fated hunt, it seemed that a kind of hitch had arisen.

Behind the "wide back" of TMX

Note also that Vyacheslav Salnikov is not a simple resident of the Tver region, as it was reported immediately after an unpleasant incident. He is a businessman, and not a simple one, but quite possibly connected with such authoritative mastodonts of domestic business as Ilya Traber, Nathan Wiener, as well as with the legendary owners of Transmashholding Iskander Makhmudov and Andrei Bokarev.

However, Salnikov himself can confirm this, because so far his son Dmitry Salnikov, who, by the way, turned out to be a United Russia district deputy from the Tver region, has denied reports of his death. And also - general director of Okhotresurs LLC. This was written by PASMI (recognized as a foreign agent in the Russian Federation).

Vyacheslav Salnikov is a huntsman. That is, it can easily be assumed that he took part in the general hunt "according to official need" and accidentally "fell under distribution." Who shot, again, is still not clear.

But what kind of office is this - "Okhotresurs"? Literally a cursory look at her makes it clear that this company is not simple.

Dmitry Salnikov is the general director in it. Allegedly, a huge number of hunting grounds gathered under this office in the Zubtsovskaya district of the Tver region. Apparently, they could engage in elite hunting with the participation of large politicians, businessmen, security officials. 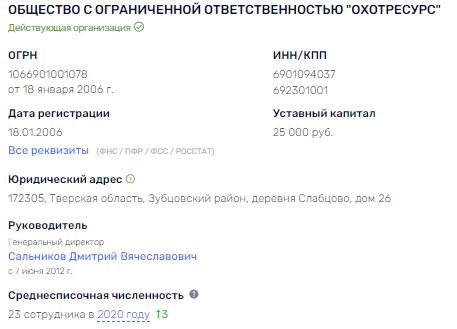 Okhotresurs itself does not belong to the Salnikov. It is owned by 99% of BMZ UK JSC (Bryansk Machine-Building Plant) and owned by HVAC TMX JSC by less than 1%. The latter is a car building company, 4% of which belong to the same JSC Transmashholding Makhmudov and Bokarev. The value of TMX net assets is 120 million rubles. This is an industrial enterprise.

But OOO Okhotresurs (in fact, hunting farming) is even more interesting. To begin with, since 2012, the company has never seen profit. At the end of 2020, she received revenue of 16 million rubles, but went into minus... 139 million rubles. And the net value of the assets of the structure amounted to 172 million rubles.

Who, how and why distills through a regular hunting farm with an authorized capital of 20 thousand rubles tens, hundreds of millions, which are recorded in losses?

But this is not the main question. Much more intrigue is that the usual, it would seem, company clearly does not operate without the knowledge of the aforementioned Messrs. Bokarev and Makhmudov. 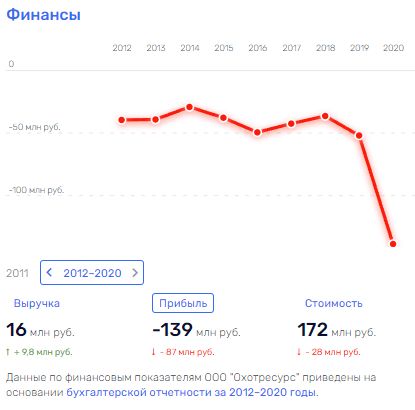 Interestingly live hunters "under the wing" TMX Bokarev and Makhmudov?

Further - more. After all, it is these businessmen, and specifically - their very structure of Transmashholding JSC - who is one of the largest contractors of the Moscow City Hall for the supply of rolling stock for the metro and tram lines, as well as other contracts. For example, a couple of years ago she won the next billion-dollar tender for the supply of trams to Moscow. About this wrote Vedomosti.

Also, let's not forget with whom exactly these contracts were concluded. With the Department of Transport of the Moscow Government, which is led and supervised by Deputy Sobyanin Maxim Liksutov. He is a former co-owner of Transmashholding and an ex-partner of those same Makhmudov and Bokarev. In the company, he had about 50%, which he sold to partners, switching to public service. But he clearly did not lose ties.

Why are these retreats? Again, Okhotresurs should be controlled by Makhmudov and Bokarev, who are believed to be well friends with the Moscow City Hall through Maxim Liksutov. The mayor's office, accordingly, is led by Sergei Sobyanin - who was allegedly very dissatisfied with the appointment of General Oleg Baranov to the post of head of the Main Directorate of the Ministry of Internal Affairs of the capital.

About some public episodes of their possible conflict with Kolokoltsev is unknown. Nevertheless, a number of analysts often recall the resonant case of journalist Ivan Golunov, which turned into an image disaster for the entire capital (and not only) police class. Then, recall, it was Sobyanin who personally asked Oleg Baranov to take control of this scandalous case. Moreover, Baranov, apparently, like Kolokoltsev, was hardly happy with such attention to their department, and even "highlighted" by Sobyanin.

Everything mixed in the lands

... And now, 2.5 years after the story with journalists Golunov, a strange incident occurs on the hunt in the Tver region.

And if we assume that everything above is correct, would it be difficult for Sobyanin (if not personally, then through Liksutov) to agree with the owners of Tranmashholding, and then give the command to "arrange a show" on the hunt with the participation of Baranov?

The connection of the Salnikovs with TMX can be traced through another office - "Profile" (losses - over 80 million rubles!). The general director in it is also Dmitry Salnikov. And this company also, through several stages of ownership, belongs to Bokarev and Makhmudov. But not only to them, but another 33% (again through several stages) - "RN-Yuganskneftegaz." The latter is a large production asset of the Rosneft state corporation, which is managed by the notorious Igor Sechin.

As for Makhmudov and Bokarev, according to the authors of the ChK-OGPU telegram channel, allegedly these hunting grounds were completely intended exclusively for organizing the personal hunting of these billionaires and their dear guests. They say that somewhere there may be a hunting estate of Igor Sechin. In general, the place is clearly not simple.

The craziest thing is that these are not all Salnikov's business connections, which became known as a result of the incident. After all, the interests of the St. Petersburg authoritative entrepreneur Ilya Traber can be protected there. The victim Vyacheslav Salnikov is listed as the director of Lukovnikovo LLC, and was also the director of Elitservis + LLC, which previously had a stake in businessman Rudolf Movsumov, who, in turn, is the owner of Bsi-2 LLC (hotel services in Kaliningrad), the co-owners of this company were previously offshore "Lema He was a co-founder of Axel Group LLC, an automobile dealer who had a corporate conflict, allegedly with the participation of Ilya Traber.

In addition, through the founders of Bsi-2 LLC, you can trace people who are associated with Nathan Wiener, the son of the famous entrepreneur and sports coach Irina Wiener (as well as the wife of Alisher Usmanov). All this can be easily traced in open sources.

Few situations hide so many pitfalls and possible interests. And from one of them (not necessarily even from Sobyanin or the owners of TMX) the initiative could come to change the head of the capital Glavka.

Obviously, one of the priority tasks of the person holding this post is to control the huge areas of the capital's economy. For example, he needs to monitor the observance of legality in the markets of Moscow, many of which (like the same "Sadovod" and the shopping center "European") belong, for example, to the owner of the Kiev Square Group of Companies, billionaire developer Goda Nisanov. The situation is such that even his interest could have been assumed if it had not been known that he was allegedly in a good relationship with Kolokoltsev. Previously, their relatives had a common business.

In general, the investigation must understand the true causes. Although it is likely that in any situation, the injured huntsman may still be extreme in this situation. We wish him health - next to such "hunters" for large game you need to be constantly in good shape.