While Roscosmos is drowning in corruption, its head Dmitry Rogozin feeds people with promises and assures them that he does not pay attention to critical information in the media. In fact, he not only pays attention, but also sues those who dare to tell the truth about his affairs.

According to the correspondent of The Moscow Post, the controversial Head of the Roscosmos State Corporation Dmitry Rogozin gave an extensive interview in which he spoke about his work and attitude to the "negative information" towards his person in the media. He said that such publications are an attempt to discredit him, and that "we will fight corruption." Why will we? Apparently now the fight against corruption within the Corporation is not conducted at all. But something else is more interesting.

Among other things, Rogozin said, quoting from the Roscosmos website: "not everyone likes such my position. Hence the wave raised in the official media and anonymous Telegram channels. There is a powerful negative information, but I stopped reading it, because I understood why everything is happening, who the customer was. The tougher I put things in order in the industry, the more irresponsible noise there is in the media."

We will talk about putting things in order later. And Rogozin did not explain who was the mysterious "customer". But it is extremely doubtful that Rogozin stopped reading the media, because he is fiercely suing those who dare to tell the truth about his affairs. Our publication is also forced to reflect the claims of Rogozin. And the appeal goes not only to the courts, but also to other bodies.

Is it easier to fight journalists than corruption?

The pressure from Rogozin on our publication is unprecedented. We were forced to turn to the Prosecutor General of the Russian Federation Yuri Krasnov for protection of our rights (and readers' rights to get objective information). He received a letter signed by editor-in-chief of The Moscow Post Alexey Kozlov.

The letter says: "Our publication is under unprecedented pressure from the police. After the publication on the website of the publication of articles "Is Rogozin the "undertaker" of Russian Space?" and "Double energy robbery?", dedicated to the Roscosmos State Corporation, according to Rogozin D. A., the investigator of the 2nd Department of Inquiry of the Russian police Department in Moscow, K. Yu. Leonov, opened a criminal case on the basis of a crime under part 2 of article 128.1. of the criminal code "Slander".

Now the Ostankino City Court is considering a claim of Dmitry Rogozin to protect the honor and dignity of the publisher against The Moscow Post, Nebokhod-Media LLC, and several other "objectionable" organizations. Does it mean that Dmitry Rogozin is lying when he says that he stopped paying attention to critical publications? He pays great attention, and maybe even does everything to make them disappear.

By the way, one of the articles that outraged Dmitry Olegovich - "Star wars" of Rogozin and journalists", which just tells about the pressure that our publication is experiencing. This and other materials tell about corruption in Roscosmos and what a deplorable situation it has reached under such leadership. 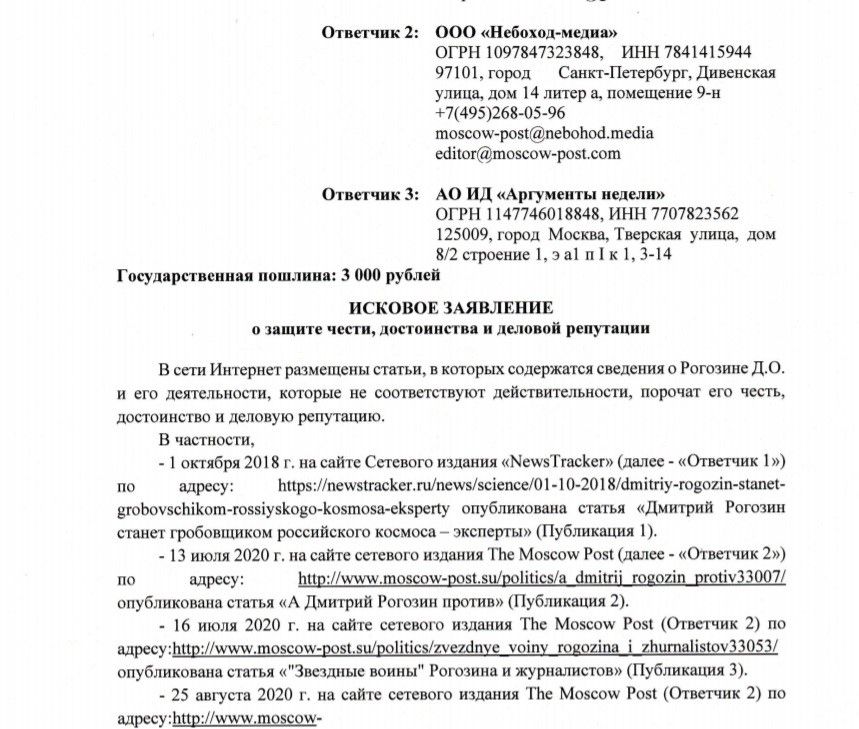 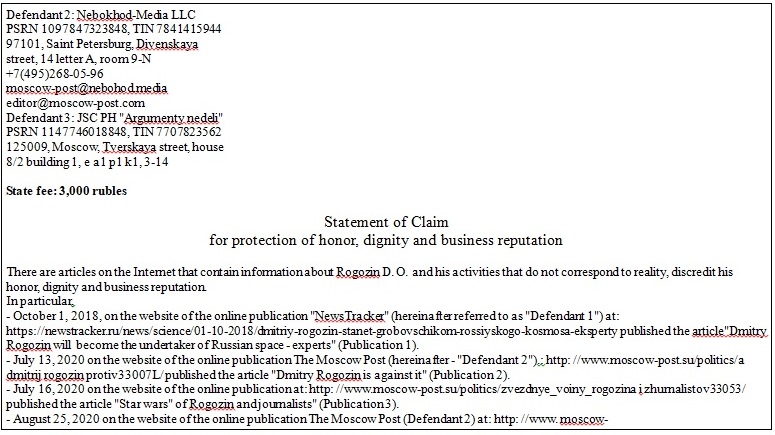 If perverse logic is used, Rogozin can be understood. Not being able to cope with corruption, or clearly answer questions from journalists, the only thing left is to use administrative and judicial mechanisms, isn't it?

How Rogozin "puts things in order"

Meanwhile, corruption scandals in Rogozin's entourage only multiply, mixed with bungling and incompetence. One day it may end in tragedy. Recently, an air leak was detected in the Russian segment of the ISS. They tried to seal it with tape. This was reported by RIA Novosti. An eloquent metaphor for the state of the entire Russian space.

This is not the first such case. Back in 2018, a hole was discovered in the Russian segment of the ISS. It is not clear who drilled it. This was reported by TASS. Later, Rogozin said that he knew where it came from, but would not inform the public. This was reported by Gazeta.ru. Apparently, in the course of an internal investigation, they came out on their own.

It's amazing. In 2019, Roscosmos allocated half a billion rubles to control the quality of rockets assembly. This was reported by Interfax. Apparently, both these funds and those that were allocated earlier, went and keep going wrong way. Into the pockets of Rogozin's subordinates?

Earlier, Roscosmos had to to postpone the first launch of Proton-M rockets this year from the end of March to the end of May. The reason was substandard components, namely several defective bolts that could fall apart right in flight. What is going on in Rogozin's fiefdom?

In 2017, the launch program from Baikonur was under threat. All Proton-M second and third stage engines produced in recent years were sent back to the factory. Reason: the engine blocks with the use of precious metals were replaced with "non-liquid" components in the factories. It looks like they were "taken away" and sold. Why doesn't Rogozin do this instead of litigating with journalists?

Another example is the long-suffering Nauka (Science) module for the ISS, which was discussed back in 2004. In 2013, when the Science was almost ready, it turned out that there was a huge amount of defective items. In Energia RSC it was reported that the pipeline system filling with fuel turned out to be littered. That is, it could lead to the breakdown of the entire ISS propulsion system and bury the Russian space in one blow.

Nauka began to be tested properly only in February 2020. Because in 2017, there was another defect - in the fuel tanks of the module. After that, it was necessary to change the entire body. And all under the strict supervision of Dmitry Olegovich, who dreams of exploring the Moon and Mars. And recently he called Venus - the Russian planet. Apparently, he wanted new budget allocations for the next "project".

But Roscosmos is already losing competition in the market. This is especially true for commercial launches, where American engineer and entrepreneur Elon Musk now sets the "weather". While Rogozin was tweeting and dreaming about Mars, Musk's Space X company gained an advantage.

Due to the "wise" management decisions of the Roscosmos leadership, it was decided to reduce the prices for commercial launches by 30%. This was told by Rogozin himself. In August 2019, the subsidiary of Roscosmos - GK Launch Services, already announced its intention to almost halve the prices for launches on Soyuz-2 for 2020. This was reported by Kommersant. 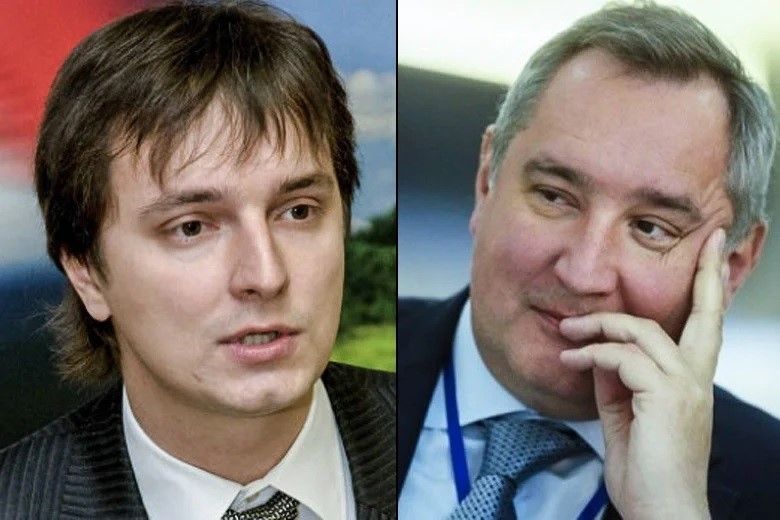 The Rogozins son and father – hand and glove?

All these failures and "bungling" take place against the background of large-scale corruption scandals in the industry. It is not difficult to assume that theft is being continued on the construction of the Vostochny cosmodrome, which evil tongues have long dubbed a monument to corruption of cosmic proportions.

And there is a lot of money there - by 2020, about 300 billion rubles should have been invested there. As Argumenty i Fakty wrote, in 2019, every 10th ruble could be stolen there. All this went so far that President Vladimir Putin had to intervene in the situation.

"It has been said a hundred times: work transparently, a lot of money is allocated, the project is almost nationwide. No, they steal hundreds of millions, hundreds of millions", - the Head of state said in August 2019. His words are quoted by RIA Novosti.

Does it mean that Rogozin does not want to listen to the President's words? Soon, the problems with corruption in the Russian space were announced by the then Prosecutor Yuri Chaika. He told about the detection of new theft of more than 1.6 billion rubles in Russian state corporations, including Roscosmos. RBC wrote about this.

One by one, people from Rogozin's inner circle end up in handcuffs. Not so long ago, the former CEO of RSC Energia (part of Roscosmos) was detained. He and several others are suspected of major fraud. This was reported by TASS. Ivan Safronov, an adviser to the head of Roscosmos, was also detained. He may be charged with treason. Is the ring around Rogozin shrinking?

So if he suddenly decided to fight corruption, as he said in his interview, then it's time to start. And he should probably start with himself. After all, some of the stolen funds can flow into his pocket as well. Last year, there was a major scandal related to his new apartment in an elite residential complex in Moscow. According to some reports, its cost may exceed 500 million rubles.

According to rumours, the apartment could be a bribe to Rogozin from scandalous developer God Nisanov. His Kievskaya Ploshchad has long been looking at the lands of the Centre n. a. Khrunichev, which are under the jurisdiction of Roscosmos. Allegedly, they wanted to sell the land and use it for residential development by Nisanov's structures. But it was defended.

Meanwhile, Rogozin's son Alexey is also a well-known personality. Who was previously appointed General Director of the TIH Nagatinskaya in Moscow, which is being developed by Kievskaya Ploshchad. But here's the problem - after it became known to the media, Alexey resigned as CEO. What great the power of the printed word is!

Apparently, all this irritates Rogozin. Therefore, instead of a real fight against corruption and the development of the space industry, he prefers to fight with journalists. There will be result only one for him  - greater public response.