While the Head of Tatarstan is "taking care" of the Republican economy development, he himself, through his family and trusted persons, can illegally be engaged in business, "crushing" the most profitable assets of the region.

As it became known to the correspondent of  The Moscow Post, President of Tatarstan Rustam Minnikhanov suggested creating the first Russian bond zone in the region, where a special customs regime will operate. According to the politician, this will increase the export of Russian goods via the Internet ten times.

It is great that the political heavyweight who has been leading the Republic for ten years is concerned about the problems of economic development. However, it seems that during this period, he could "subdue" almost everything that is possible from the "offline" profitable assets of the region. Has he now  decided to get to online trading as well?

While Minnikhanov is taking care of the development of e-Commerce, credit institutions continue to collapse in his region, and the state debt in 2019 has grown to 94 billion rubles. This is one of the highest rates in the country. About the same amount was lost in the crash of Tatfondbank.

At the same time, people do not stop spreading rumors that the Head of the Republic is actively engaged in business himself, despite the status of a state official. And he does it allegedly through his wife Gulsina and numerous relatives. Detractors attributed to them a lot: "squeezing" enterprises, pressure on small businesses, and looting of the same Tatfondbank together with Intechbank.

But he does not pay attention. In 2019, according to the official Declaration, Rustam Minnikhanov showed a very "modest" income of 8.8 million rubles. Thank God, his wife Gulsina helps him stay afloat financially - a talented entrepreneur who brought 480 million rubles to the family treasury over the same period - 54 times more than her husband.

According to the Regnum publication, not only Minnikhanov's children but also his grandchildren are in business. Other relatives of the Head of the Republic should also be involved. For example, the Sabinsky district, which is native to Minnikhanov, has been headed by his brother, Rais Minnikhanov, for many years. His children are the owners of many businesses not only in the Sabinsky district, but also throughout the region.

By far, the most influential woman in the Republic is the President's wife, Gulsina. Today, she is listed as the founder of 8 organizations at once, some of which have signs of fictitiousness. Let readers not be confused that many of these companies are associated with the beauty industry – after all, it is possible that hundreds or even billions of rubles can be withdrawn through them.

For example, LLC Luciano, which the wife of Minnikhanov owns together with the Cyprus offshore company Santerna Holdings Limited. The company has only one employee, and at the end of 2019, the firm did not receive a single ruble of revenue. But it went to a loss of 432 million rubles. Where did this money come from and where did it go? Despite the fact that the value of the company's assets is more than 280 million rubles! 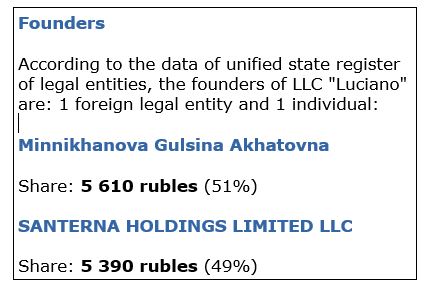 Of course, the spouse has every right to own and manage the business. Only why is the company tied to an offshore company - does the first lady of Tatarstan not want to pay taxes in her native Republic? Very strange!

Something similar can be said about Mir Fitness LLC. With revenue as much as 87 million rubles (fitness halls - such money?), for some reason she went to a loss of 35 million rubles. And the book value of assets is shown as negative. How can this be? 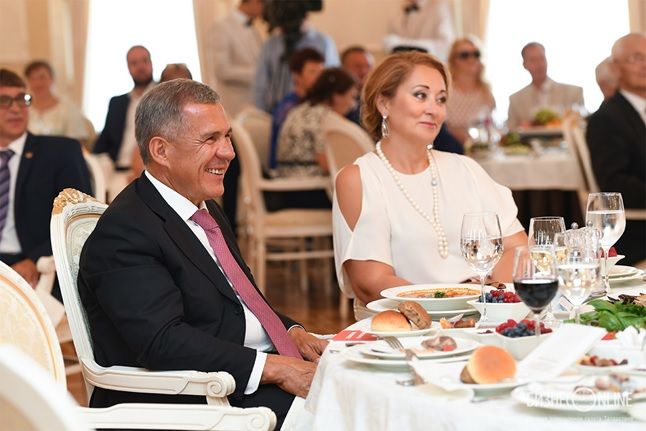 Rustam Minnikhanov and his wife

But that is not half the story. Rumours that money can be laundered through Gulsina's offices have been going around for a long time. What kind of money and where from? According to evil tongues, allegedly Minnikhanov and Co are engaged in the capture of profitable businesses by someone else's hands.

Three years ago, the owner of the Kazan plant of metal products JSC Sirius Airat Amirov said that a group of unknown people with clubs invaded the territory of the enterprise, after which he lost control over it. This is written by the publication Business-Online.

Perhaps Amirov was so unlucky because the other shareholder of the company at that time was Minister of Industry and Trade of the Republic of Tatarstan Albert Karimov. Protégé and confidant of Rustam Minnikhanov. Before that, the plant was literally ruined (perhaps not without the help of Sberbank, where it was credited). According to rumors, the Head of the Republic himself could give the command to "sqeeze" the structure. Well, was Karimov supposed to oversee the process?

As a result, it seems that the plant was simply "spun-off". The damage from these actions could amount to more than 1.5 billion rubles. 150 people were left without work. This is a concern for business and the economy! Did all this happen without the knowledge of the President? It's hard to believe.

However, there is something else besides factories. The current coronacrisis could also work to the advantage of the President's inner circle. Because last year, the pharmaceutical company Pharmmedpolis-RT was "pumped up" with resources and assets, which detractors are also trying to link with Minnikhanov.

It is not difficult to do this, because it belongs to former adviser of Minnikhanov Rustem Magdeev and former Minister of Health of the Republic Ramil Khabriev. Both men, according to rumors, have long represented the interests of the High Tatar Chief. 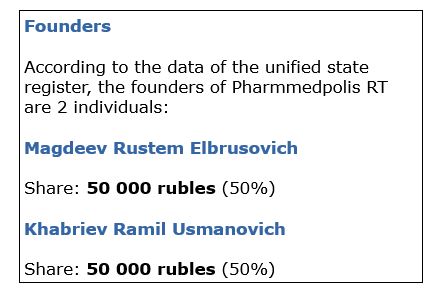 Magdeev, who is considered by some to be the "wallet" of Minnikhanov, even managed to get a medal from the hands of Rustam Nurgalievich in 2019 - "for services to the Republic of Tatarstan". Deserved it!

At the same time, people dissatisfied with Magdeev constantly spread silly rumours about his mythical connections with "crime "and attempts to "raid". Perhaps the last case is an alleged attempt to "squeeze" OKB (experimental design bureau) n. a. Simonov. The Bureau, located in Kazan, was developing a new heavy drone, but suddenly its chief designer Alexander Gomzin appeared in detention centre.

The charges were considered by many to be outright "fake". Versia publication wrote about the fact that Minnikhanov could be a customer of Gomzin's arrest.

But it is important that the contract for 3.6 billion rubles was transferred to The Ural Works of Civil Aviation (UWCA), which is controlled by Viktor Grigoriev. According to rumors, a longtime business partner of Magdeev. And these comrades could act not only in the interests of Minnikhanov, but also of Sergey Chemezov and his Rostec, that rules UWCA.

Chemezov may even be one of the key government officials with whom people close to Minnikhanov work. For example, Rostec, or rather its subsidiary RT-Invest, received a permit to build a waste incineration plant in Osinovo - very close to Kazan.

This caused a flurry of discontent among local residents. But it seems that the leadership of the Republic does not care about their opinion, since we are talking about such huge investments. Last December, hundreds of OMON officers dispersed a tent camp of people who went to an unauthorized protest. Kommersant wrote about this.

Of course, this did not add to Minnikhanov's popularity. However, the biggest blow to this very reputation was inflicted in 2017, when hundreds of banks depositors with the participation of the Tatarstan Government - Tatfondbank and Intehbank - were left out of business.

In 2017, Tatfondbank, the holder of 50% of the stocks of which was the Government of the Republic, lost its license. As follows from the message of the service Banki.ru, "with the unsatisfactory quality of assets, PJSC Tatfondbank did not adequately estimate the taken risks. The management and owners of the bank did not take effective measures to normalize its activities".

Did they really not take measures? Why then did no one from the Republic's leadership bear any responsibility for this? Or was the hole in the Bank's capital created artificially, and the depositors' money settled in some offshore accounts? Like Santerna Holdings Limited of Gulsina Minnikhanova.

However, "did not bear responsibility" seems to be temporary. According to the Sobesednik publication, the activity of Tatfondbank  was controlled by Robert Musin, whom the journalists of the publication call the main purse of the President. He also controlled the activities of the infamous AK BARS Bank - another Bank with state participation and not the most pleasant fate.

Today, Robert Musin is under investigation. A criminal case for more than 50 billion rubles - and just about the collapse of Tatfondbank. He is facing a serious sentence, as Kommersant wrote. However, there is a possibility that Minnikhanov does not leave his people in trouble. 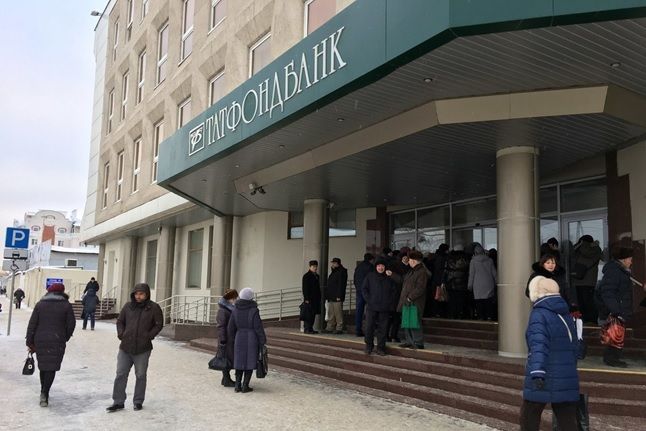 The Republic owned a 10% stake in Intechbank. In 2017, it also lost its license, leaving it with a "hole" of 14 billion rubles. Not so much, compared to Tatfondbank, where it was up to 100 billion rubles. But people kept writing complaints and requests to return their money. Depositors believed that the authorities were responsible for taking these risks.

Whether money was withdrawn from these banks is unknown so far. But there are rumors that the money could be withdrawn from another state structure - Tatneft. Today, the Republic owns 34% of this company.

Back in 2011, a year after Minnikhanov came to power, the Wek publication wrote about the likely withdrawal of assets. It should be reminded, that the Board of Directors of the company was headed by Rustam Minnikhanov himself both then and today.

And it seems that all these stories are just the tip of the iceberg. A tale about how Rustam Minnikhanov and people close to him "take" Kazan. To be more precise, they could crush  profitable assets of the entire region, partially withdrawing funds from them for a "rainy day". Today, Minnikhanov is nominated for another presidential term. Will there be further stories of unfriendly takeovers, bank failures, and the success of his relatives?