Businessman with an ambiguous reputation, Alexander Kazachenko, can give Promtseolit "to tear up" his foreign partners in order to avoid paying multimillion-dollar debts.

According to the correspondent of The Moscow Post in the Oryol Region, the reader turned to the editorial office, telling how the long-suffering Promtseolit could be in the hands of Chinese partners Alexander Kazachenko from Alsiko. Back in 2011, Kazachenko opened Alsico Overseas Ltd in the offshore zone of Hong Kong, 70% of the shares of which are held by Alsico, but the other founder is Chinese citizen Lina Wang. This businesswoman also owns Agroimpex, to which Alsico owes more than 182 million rubles. It is possible that Promtseolit will become a reckoning with foreigners.

But the prerequisites for this really exist. Earlier, The Moscow Post told in detail that the city-forming enterprise of the Khotynetsky district was completely disconnected from gas for non-payment of debts. Earlier, the second shift was canceled at the plant, not fully paid with employees. It was believed that Mr. Kazachenko thought of bleeding the company in order to evade the demands of numerous creditors.

In this case, the version of the transfer of the asset to Chinese partners looks quite logical. But if for Kazachenko this can be a good way to get away from paying debts, then for the residents of the Khotynetsky district themselves it can turn into numerous problems. After all, it is not a fact that the company will retain specialization. Our informant suggests that a huge quarry for the extraction of zeolite can be used to dump chemical waste. 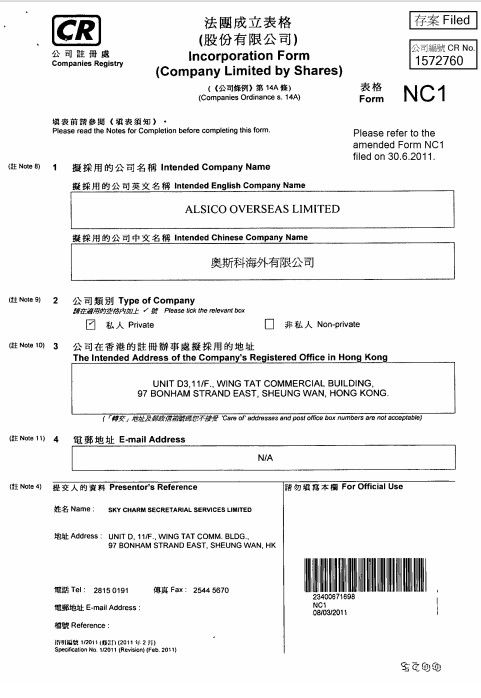 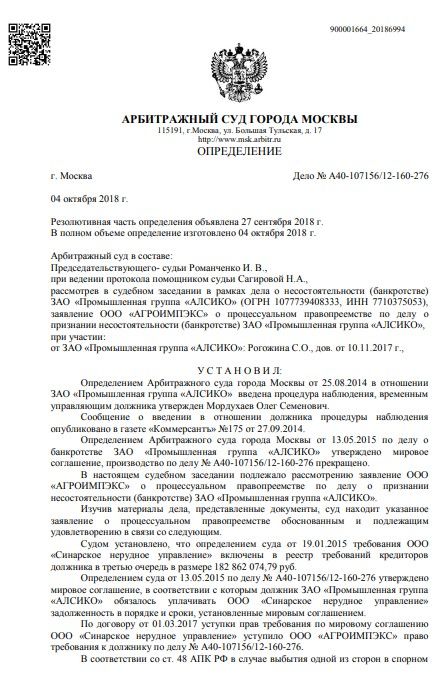 And these are not empty fears. A subsidiary of Alsico in Novosibirsk has already become so famous when it tried to start production of hazardous chemicals in the city center. According to "Abirega", the director of Alsiko-Agroprom Sergey Aistov was suspected of giving a bribe to the head of the territorial administration of Rospotrebnadzor in the Novosibirsk region. He transferred a cash amount of 40 thousand rubles in the hope of obtaining permission to open a high-grade chemical production in the city.

What if Promceolit awaits a similar unenviable fate? Recall also that near it is the reserve zone of the Oryol Polesie. In other words - in which case, the threat will hang over the entire ecosystem of the Oryol region.

Promtseolit's problems began after a shareholder conflict: an investor in TIG Mineral Resources, which is associated with media manager Aram Gabrelyanov, accused the Alsico industrial group and its head Alexander Kazachenko of "raiding" the plant.

History takes its origins in 2010. Then Alsico invited TIG Mineral Resources to the business, which bought 49% of the stake in the structure of the Zeomax holding. The offshore company was associated with the family of media manager Aram Gabrelyanov. And, apparently, the appetites of the latter quickly increased: already in 2012 it turned out that OJSC Melor and OJSC Promtseolit no longer belong to Alsico. At first, they were alienated in favor of Kazachenko's late partner Valery Baghdasarov and his daughter Sabina Danielyan for 1.8 million rubles, who then resold shares for $2 million to TIG Mineral Resources.

According to "Komsomolskaya Pravda", in the future, the court recognized these transactions as null and void, committed with intent, in order to withdraw assets from enterprises. The court decided that TIG Mineral Resources owned the enterprises of Melor OJSC and Promtseolit OJSC illegally, without any legal grounds. It turned out that assets were withdrawn from the organizations, all vehicles, equipment and equipment disappeared, losses were organized, serious debts to third parties were formed. It turns out that Kazachenko did not want to ruin the company at all?

However, it is too early to put an end to this confrontation: the Cypriot company still has a stake in Ceomax. It is also known that LLC TseoTreydResurs is an agent through whom "Promtseolit" conducts all sales of the products. According to "Rusprofail", the company is owned by Aram Gabrelyanov.

And here it is worth remembering that this story gained resonance after the tragic death of businessman Valery Baghdasarov, who was considered Gabrelyanov's man. The businessman passed away voluntarily and demonstratively, right under the surveillance cameras in the capital's subway. It is also alarming that his suicide note was classified, so it remains only to guess what caused the fatal act.

Now different versions are being put forward, one of which says that he suddenly owed about a billion rubles - such a debt burden was formed due to the fact that the businessman acted as a guarantor of Alsico loans. This suggests that Kazachenko can really be profitable now to bankrupt the company and get rid of assets - you won't ask Baghdasarov anything.

Earlier, the informant of The Moscow Post told very disturbing stories about Kazachenko. Allegedly, everyone who tried to confront the entrepreneur, either had already passed away themselves, or were left without business and with millions of debts. According to unconfirmed information, Kazachenko has extensive connections in the courts.

If this is true, then the competent authority would need to study the activities of the businessman more carefully.

Who is Mr. Kazachenko?

By the way, it is quite difficult to find information about Kazachenko in open sources. A little of what is known about him for sure: at the beginning of the zero, he began to partner with Baghdasarov, but after 10 years, tension began in their relations. There is information on the network that the reason for this could be that Kazachenko, together with the top manager of Alsiko Sergey Aistov, scored loans that he did not really strive to return. This, they say, angered Baghdasarov, because it jeopardized the existence of their business.

The fate of the financial organizations with which Alsico collaborated is not enviable either. So, Investorgbank ended up in reorganization with Transcapitalbank and is still sitting in losses. According to an anonymous author on the Nahjob portal, allegedly Kazachenko and Aistov conspired with the bank's chairman Vladimir Gudkov. Later, the latter was accused of embezzlement from the bank of more than 7 billion rubles, he disappeared abroad, "Kommersant" reported.

Actively credited Alsico and Gazinvestbank. As a pledge, the real estate of the same Promtseolit was issued. In 2008, the Central Bank revoked the license from the credit institution, later it was declared bankrupt. DIA then stated that of the 100 million rubles that Alsico owed, only 2 million were returned back.

In 2012, news passed that the ex-head of Alsiko-Agroprom LLC, which was engaged in the production of fertilizers, illegally operated equipment owned by Rosagrolising JSC. The court of the Kirovsky district of Novosibirsk decided to return the property to the rightful owner, "Kommersant" wrote.

Probably, the money thus raised could go to sponsor opposition politicians - in particular, the names of Alexei Navalny, Mikhail Khodorkovsky, deputy of the Council of Deputies of the city of Novosibirsk Sergey Boyko are mentioned. In addition, some believed that Kazachenko could send money to the editors of The Insider. Note only that this publication actively covered the corporate conflict, giving Kazachenko a platform for speeches - in particular, the text of October 2014 consists in half of an interview with a businessman.

If in really now "Promtseolit" will retire to Chinese partners, then Kazachenko can earn well on this. And will begin to actively sponsor someone? For example, so that only the information he needs about the corporate conflict in "Alsico" appears in the media.