In Bashkiria, the head of the Ministry of Construction of the region, Ramzil Kucharbayev, was detained. But The Moscow Post warned Radiy Khabirov about him: they can put him in jail. Didn’t the head of the region have enough scandals with Prime Minister Nazarov and his Granelle GC?

As the correspondent of The Moscow Post reports, on the eve of the law enforcement officers of the RF IC in Bashkiria, Minister of Construction of the Republic of Bashkortostan Ramzil Kucharbayev was detained and questioned. The last one appointed by the head of the region Radiy Khabirov in December 2020, worked less than six months at the new place.

The Government of Bashkiria has already stated that the investigative actions are related to the construction of treatment facilities in the village of Mayachny (part of Kumertau) in 2017. Then Kucharbayev worked as the head of the Department of Capital Construction of the Republic of Bashkortostan State Institution.

That is, the current leadership of the RB allegedly has nothing to do with these cases, because Khabirov came to lead the region in 2019. But back in October 2020 The Moscow Post warned that Kucharbayev could create problems for Khabirov and the entire region.

It is clear that Khabirov is trying to deflect the arrows from himself, because his name, as well as the names of his team members, is already too often flashed in corruption scandals. It is rather weak. He had to know who he was appointing. If Kucharbayev is involved in some kind of fraud, it is hard to believe that there was absolutely no data on him. At the same time, he could significantly "mess up" already in the chair of the head of the Ministry of Construction. And could Khabirov himself have taken part in this?

In 2017, when, according to investigators, Kucharbayev could patronize the office of A-Stroy LLC, which later received two state contracts for 38 and 56 million rubles, Radiy Khabirov worked as the head of the Krasnogorsky district of the Moscow region. Let's remember this fact.

From April to September 2020, when Kucharbayev was appointed minister, he worked as the First Deputy Head of the State Committee for Construction and Architecture of the Republic. And it was not Khabirov who formally appointed him minister, but, perhaps, the most scandalous official of the Khabirov team, a native of his own development Granelle GC Andrey Nazarov. He was previously a Deputy of the State Duma. His appointment was a scandal in itself.

Then there were rumours that with the arrival of Khabirov, the construction market in Bashkiria began to tighten the screws. And in the same April 2020, when Nazarov appointed Kucharbayev Deputy Head of the State Committee for Construction, the Sadovoye Koltso company from Krasnogorsk suddenly "came" to the region.

And "came" effectively. It was presented by a cool investor, and immediately, without bidding, in the same April, it received a lease in Ufa for a plot of land with an area of more than 3.6 hectares on Lesotekhnikuma Street. This was written by the publication named Pro Ufu. The order on the allocation of land was signed personally by Radiy Khabirov, but could it do without the conclusion of the leadership of the Committee on Construction and Architecture, where Kucharbayev was "put"?

After all, Sadovoye Koltso received a plot for a reason, and for the large-scale construction of 87 thousand square meters of housing. Then they tried to cover the transfer of the plot with a "social necessity" - they say that 10% of the "squares" will go to the deceived shareholders. However, no one cared about the fact that the rental price was estimated at 120 million rubles for 10 years.

How many apartments would it be possible to buy for real estate investors with this money? Or just pay them back from the budget? It seems that the project "went" well, if it made Kucherbaev a Minister less than six months. There were rumours, allegedly, Sadovoye Koltso was just lucky to work in Krasnogorsk while Khabirov was there. And what about Andrey Nazarov's Granelle GC?

Granelle, after the arrival of Khabirov and the appointment of its key beneficiary in the past, Andrey Nazarov, to the post of Prime Minister, went uphill and gained a foothold not only in the RB, but also at the Federal level. At the same time, Nazarov, of course, handed over the reins of management of company not to strangers - his son-in-law and sister Svetlana and Ilshat Nigmatullin. Nazarov's wife Larisa also has a stake in the companies affiliated with Granelle. 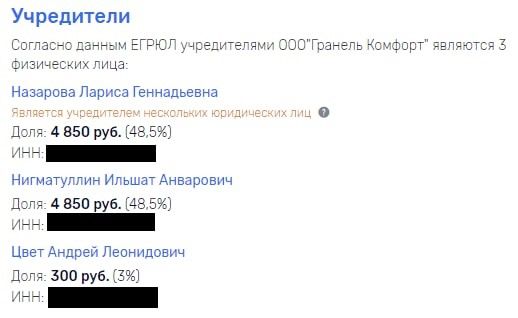 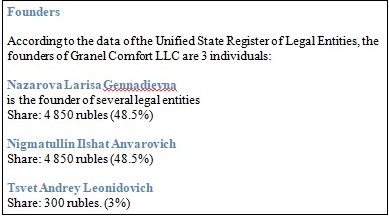 At the same time, Granelle (its subsidiary, SZ Granelle-P LLC), as it is not difficult to guess, worked perfectly in Krasnogorsk - and just from the 2017 year when Khabirov was there. However, it is strange that now this subsidiary at the end of 2019 has no revenue, but there is a profit of 409 thousand rubles, and the value of assets is not weak - 781 million rubles. With such assets, the company should earn more. Doesn't, possibly, anyone want to pay more taxes? 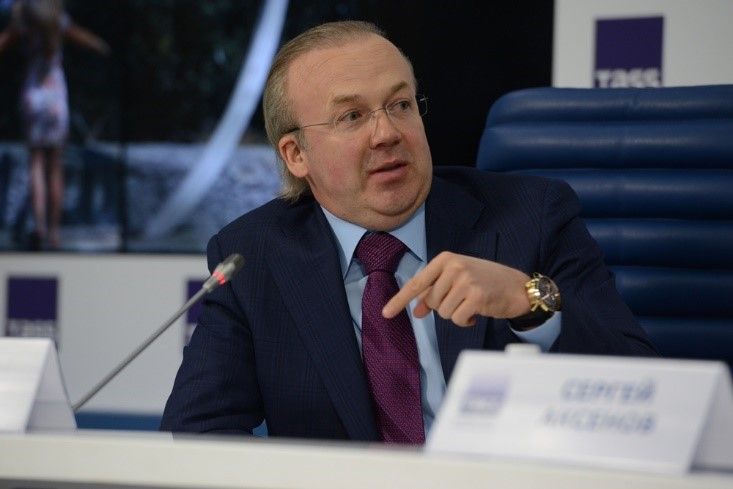 However, they say that the manner of doing business with Nazarov and his relatives is specific. Allegedly, they could create affiliated companies under the leadership of their own top managers. But without a direct connection to the Granelle. Then, on behalf of these firms, it would be possible to conclude contracts for the construction of the residential complex, and when the house is completed - to bankrupt these intermediaries through the higher-ranked Granelle.

Many of the offices associated with this firm themselves raise questions. The same Granelle Comfort LLC, registered to Ilshat Nigmatullin and Larisa Nazarova, only once since 2013 worked with a profit. In Ryazan Granelle LLC (99% owned by Nigmatullin), with revenue of 265 million rubles, the loss for 2019 amounted to 659 million rubles, and the value of assets for the year fell by the same 659 million rubles - to 1.8 billion rubles. That is, a fall at the expense of assets? And where did they go, were they transferred to some structure or sold? There is no answer.

A similar situation is in Granelle-Yug LLC (it is 1% owned by Granelle LLC). Granelle-Yug is registered to completely another person - Rustam Arslanov, and has a loss for 2019 in the amount of 202 million rubles, the negative value of assets of 229 million rubles. One of the possible intermediaries, recorded on person, perhaps, close to Granelle, from which it is not clear where the money goes.

And this is despite the fact that Granelle remains extremely successful in the market, and in 2020 it was included in the list of strategic companies of the Russian Federation with a portfolio of 4.5 million square meters of built housing. This is stated on its website.

There were also loud scandals in Granelle. It argued with its partners in the completion of the residential complex Ecopark Nakhabino RC - just in the Krasnogorsk district. Then Granelle was given the project of completion of this residential complex after the company of the son of the ex-head of the construction complex of the Moscow region Marina Ogloblina failed to cope with it.

As the Novy Vzglyad newspaper wrote, partners of Granelle considered that the structure could deceive them for 100 million rubles - and just according to the possible scheme described above with affiliated offices. Meanwhile, it is unlikely that this will put a strong stain on the reputation of Andrey Nazarov. After all, according to the authors of the Russian Criminal website, allegedly he could have been involved in the rape many years ago. That case was allegedly hushed up, and today there is no way to confirm or deny these rumours. But their mere presence could be a reason for Khabirov to keep Nazarov out of power. Not to mention the possible patronage of Granelle already from the prime minister's chair.

Still not enough for Khabirov?

As a result, other people allegedly close to Nazarov and Khabirov also dragged themselves into power. Among them is the recently appointed judge of the Constitutional Court of the Russian Federation, Munir Valeev, who in the past was deprived of the status of a judge at all. In 2012, he acquitted the former Prime Minister of the Government of the RB, Rail Sarbayev, who was accused of embezzling 1.6 million rubles. And later, Sarbayev, at the suggestion of Khabirov and Nazarov, sat down in the chair of the head of the Development Corporation of the Republic of Bashkortostan. How's that?

Actually, if such procedures could operate in the Republic at the regional level, why could not this be used in the City Hall of the same Ufa? Which also probably operates in the context of the national policy. Was anyone surprised when in October 2020, two local people were detained at once - the head of the department of city control and issuing construction permits, Rustam Tukhvatullin, and his deputy, Azat Shayakhmetov. This was written by Kommersant.

Once again, we recall that the same Kucharbayev previously worked in the Department of Capital Construction, and also probably could be aware considering issuing permits. And after that, Khabirov's team had a lot of scandals. What is worth only the battle for shikhan Kushtau, sacred to the inhabitants of Bashkiria, which the regional authorities allowed to be developped by the Bashkir Soda Company. 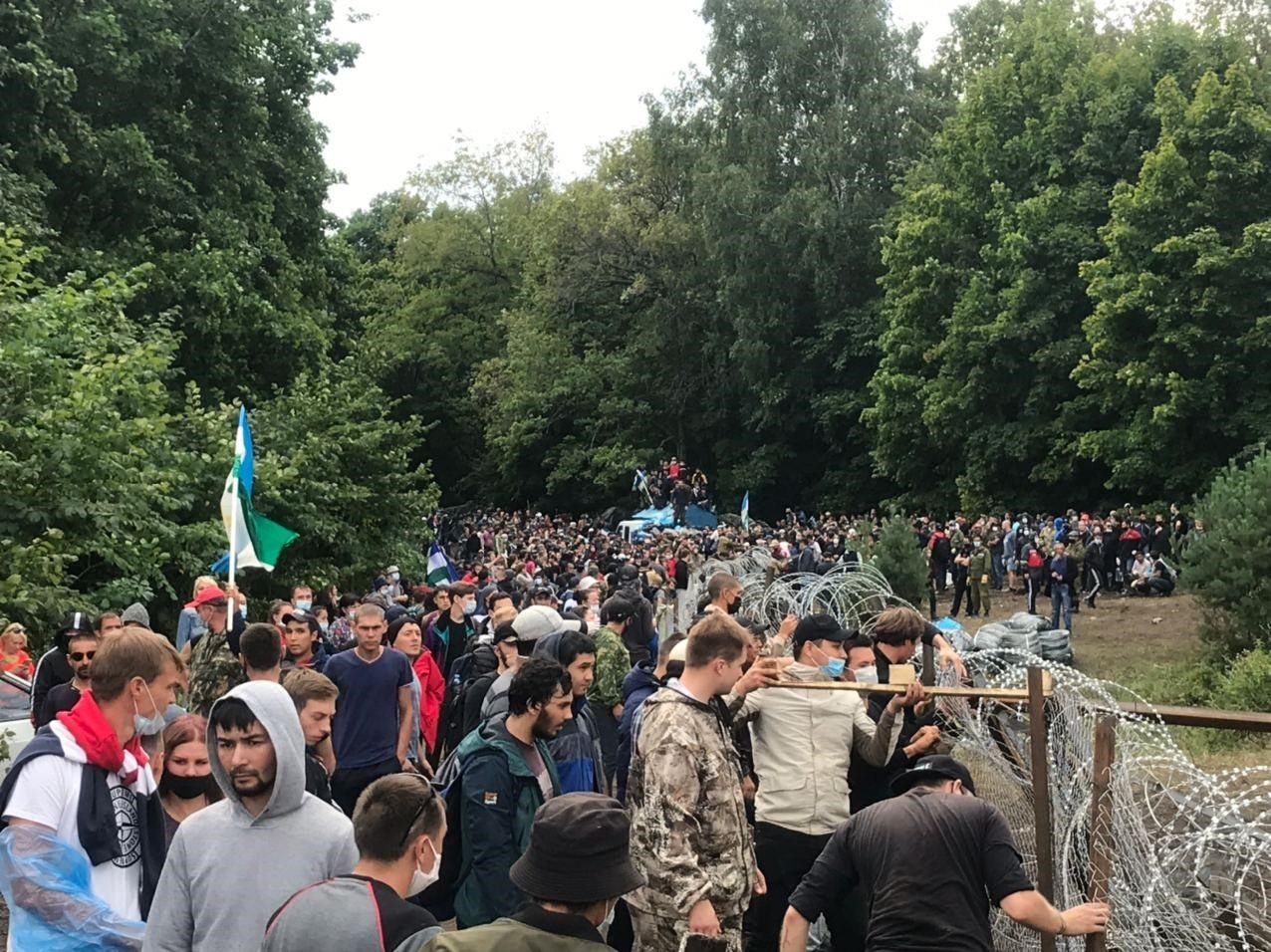 Shikhan Kushtau was defended by people, but why Khabirov’s team didn’t manage to show its good side

The story, we recall, ended with the revocation of the permit and the granting of the status of a protected natural area to Kushtau, and serious questions arose to the authorities about how the structure ended up in private hands.

Does it seem, or even this scandal alone would be enough for Khabirov to announce his resignation? But the scandals are continued, despite the fact that the economic and social situation in the RB is far from positive. Against this background, experts have already suggested that the arrest of Kucharbayev may become the "swan song" of Khabirov himself as the head of the region. Not to mention the fact that he could even be aware of the "productive work" of the minister.