The family of the Governor of the Moscow Region Andrei Vorobyov can receive the territory of the Krekshino warehouses after its "processing" by German Gref with "associates."

Sberbank, through its subsidiary Sberbank Investments, received almost 25% in Woodwell Investments Limited, which owns the Krekshino warehouse complex in New Moscow. This is reported by the correspondent of The Moscow Post. The bank most likely received this share for the debts of the owners of the space.

Previously, 100% of Woodwell Investments Limited belonged to Malltech (formerly RosEuroDevelopment, which is part of RosEuroGroup).

It is worth noting that Molltek is 100% owned by the Cypriot offshore company Red Residential Ltd (which, even before Molltek, directly owned a stake in Woodwell Investments Limited) under the leadership of the following list of persons: Pavel Titov, Anna Sukhareva and Evgeny Blinnikov. The latter is at that time the financial director of Molltek. Moreover, according to media reports, these persons run a whole network of offshore companies associated with Molltek.

And Mr. Titov is the namesake of the son of the former ombudsman for entrepreneurs Boris Titov. But it is unlikely that we are talking about him, although the entrepreneur may still have connections with officials. According to information from the Apollo website, he worked for three years in Aeroflot structures.

According to Rusprofile, Mr. Blinnikov previously really controlled Terminal Krekshino LLC. It was also indirectly related to the offshore ADIANTI LIMITED, which is the founder of Sibstroyinvest Holding. Blinnikov headed the company until the end of 2022. And "ADIANTI LIMITED," in turn, is registered for Titov, Sukhareva and Alexander Gamanovskaya.

By the way, the shares of offshore and its co-founder in Sibstroyinvest Holding are encumbered by Sberbank. According to the latest data, the company has negative profits and zero revenue. Will he leave the lender soon too? 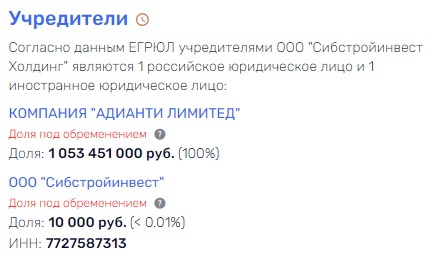 I wonder why it is Sberbank, and not Sovcombank, that credits both Sibstroyinvest Holding and the owners of Krekshino? This would be more logical due to the fact that it was Sovcombank that acquired RosEuroBank in 2018.

By the way, the personalities of the owners of Sovcombank - the Khotimsky brothers, are quite remarkable. The Moscow Post has repeatedly covered their activities - including in connection with letters from readers who complained that the bank fraudulently takes away their only housing.

And they also talked about the offshore "empire" of this tandem and suggested that RosEuroBank may be needed by Khotimsky in order to then withdraw money from it to offshore.

Judging by the financial situation of the companies credited by Sberbank from the Malltech circuit, there are not the most transparent financial transactions here. Although, perhaps, it's all just about the inability to manage assets?

On the other hand, if you recall that the former owner of RosEuroBank went to America with stories about how he robbed the Russian banking system and engaged in scams. There is no need to go far - RosEuroBank was a member of the so-called "Moldavian scheme" in 2011-2014, when more than 700 billion rubles were withdrawn from the Russian Federation. In general, wherever you look at RosEuroGroup, there is something unclean everywhere. MCC-RosEuroDevelopment (the structure of RosEuroGroup), for example, was accused of withdrawing a billion rubles.

He did not lend to the Krekshinsky and Gazprombank. Although, according to media reports, among the "offshore colleagues" of the Sukharev-Titov-Blinnikov trio there is also the former head of the project and structural financing department of Gazprombank, Alexander Ushkov.

Perhaps it's all about Gref's personal interest.

Herman Oskarovich has recently attracted a lot of attention from investigative journalists and the international community. Basically, in connection with the "shuffling of assets" taking place in the bank. Attention is also drawn to the strange proposals of the head of the state bank, who not so long ago asked the head of the Central Bank Elvira Nabiullina to allow banks not to have required financial reserves.

Even a schoolboy understands how risky it is, especially in the current economic realities, but for some reason the head of Sberbank does not care. By the way, just a few days ago it became known that the net profit of Sberbank in 2022 decreased by 75%. At the end of last year, Gref said that at the end of 10 months she Sberbank exceeded 50 billion rubles, apparently trying to hide the actual state of affairs. If you dig a little, it turns out that this is catastrophically small compared to last year, which was shown by subsequent calculations.

Not so long ago, the media learned that Sberbank sold its stake in the Croatian Fortenova Group to UAE investor Saif Alketby. Moreover, according to Fortenova, there is reason to doubt the legality of the transaction. At least because Fortenova itself found out about everything on the fact of what happened. As a maximum, the current legislation regarding sanctions involves obtaining the consent of the regulator to this transaction, which, according to Fortenova, was not.

The case can smell like criminal cases and international investigations. The Moscow Post covered the story in detail.

In addition, Sberbank sold a lot of assets of its ecosystem - Okko, Sound, MDG, Evotor and SberCloud in favor of the recently created and practically unknown structure of Novye Voshchenie JSC, which may be related to the interests of Eduard Khudainatov.

There is a feeling that Gref squeezes everything he can out of the bank (and other assets), so that he can then leave it alone with giant "holes." Last year, the head of the state bank lost almost all his deputies. Starting from Lev Khasis, who, according to rumors, in America may try to save Gref's assets, and ending with the May outflow, when Alexandra Burik and Sergey Maltsev left their posts, as well as board member Natalya Alymova. Perhaps Gref is going to follow the former deputy.

In this regard, lending to the "Khreshchikhinsky" can be beneficial to Gref from the point of view of personal enrichment. According to this version, knowingly understanding the unprofitability of the project and the future refusal of creditors from the return of funds, Gref may have issued bank money with the condition that he personally be given a "gift" in the form of part of them. At the same time, he, apparently, does not care much that the complex received for debts is, in fact, unprofitable for Sberbank. At least, because it's time to invest in its repair. As a maximum, the bank simply does not need this construction.

In the "Plane" with Gref

Former shareholders of RosEuroBank, together with the Khotimskys and Ushakov, a native of Gazprombank, could also make money on a loan from Sberbank.

By the way, it is interesting that in September 2022 Ushkov agreed with the Airplane group (associated with the interests of the Moscow Region governor Andrei Vorobyov) on the joint implementation of investment projects in the field of housing and commercial construction.

Perhaps all of the above tandem has a clear plan to bring the warehouse complex to bankruptcy and further implement it at the auction for the contractual Mr. Vorobyov.