"Gravediggers" from the Russian opposition

The beneficiaries of a Russian start-up in the funeral services market may be closely connected with the financing of the non-systemic opposition and passionately want to withdraw the money earned in the Russian Federation abroad, and the name of their relative appeared in the criminal scandal.

As the correspondent of The Moscow Post reports, the Russian startup Chestny Agent (Honest Agent) has developed an IT platform All Funeral Services for participants of the funeral business in the United States. The launch of the service is expected in February, and for us it is much more interesting who is behind this company. After all, according to evil tongues, the alleged structure may be closely linked to the non-systemic opposition in Russia, and access to the American market may well be a banal desire to withdraw money earned in it from the country.

The general director of Chestny Agent is a young entrepreneur Artem Manilov - the brother of another Manilov, Ilya. Both brothers are the sons of another, quite well-known businessman, Yuri Manilov. The latter was one of the founders of the now-liquidated Parliament Group, which produced vodka called Parliament and Urozhay.

The Manilovs are known for actively supporting liberal political views and all sorts of "fighters" with the regime inside Russia. The name of JSC Chestny Agent could be found in the sensational investigation of the journalist Ivan Golunov about the "ritual mafia" in Moscow. There, Chestny Agent appears as a company that manages burials in a number of Moscow municipal cemeteries. It is also an active competitor of the State Institition Ritual, which has been repeatedly criticized in the liberal media.

Competitors and the "alcoholic" father

It looks like this is the reason. In the summer of 2019, a group of businessmen, supposedly associated with "the funeral mafia" (probably, it could be due to the structure of the Manilovs, but this is not proven by court), sponsored campaign of a well-known supporter of Navalny, Lyubov Sobol in the elections to the Moscow city Duma 43 constituency. 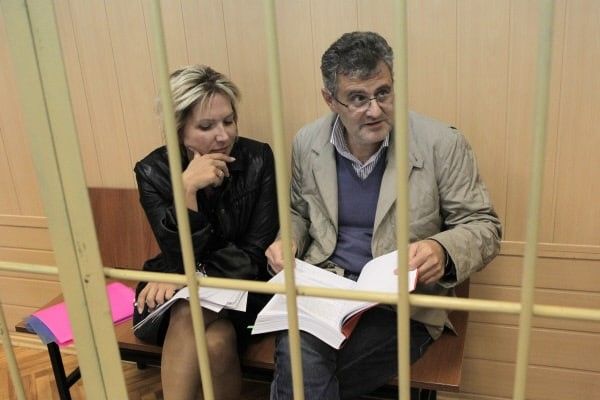 Yuri Manilov after being detained in 2012

Sobol could have received the money, presumably, through her husband Sergei Mokhov. In the past, he could receive about 7 million rubles from beneficiaries from companies working in the field of funeral services and closely associated with crime. According to rumors, among such persons there was the name of Yuri Manilov.

In 2012, the businessman became a defendant in a criminal case of extortion. As Kommersant wrote, Yuri Manilov and another co-founder of the Parliament Group, Sergei Kupriyanov, were detained that year. According to the investigation, they enlisted the support of the influential criminal authority Mark Ilgotin ("Marik"), and with the help of threats received 17% of the shares of JSC OGO Agro-Industrial Company, as well as control over 13 grain elevators. Moreover, in the latter case, the security forces believed that the owner of the elevators was threatened with murder.

That case, however, collapsed, the version of the investigation was not confirmed, and all suspicions were dropped from Yuri Manilov in 2013. However, according to evil tongues, supposedly big money and the right of the phone could play a role in such a happy outcome. Another high-profile criminal case, already close to our days, may also speak about this.

In 2018, the FSS detained an ex-Russian kickboxing champion and the head of a collection agency on suspicion of fraud. Both received $500 thousand for helping to free the co-owner of the alcohol group Parliament Yuri Manilov. This was written by RBC.

This is just about the situation in 2012. Allegedly, they were contacted by a friend of Manilov, Pavel Yezhov, and he was even given part of the money of $500 thousand of $1 million. However, it seems that Manilov's people were simply deceived, and the extortion case was "resolved" in some other way. In any case, the situation should be understood by law enforcement, but all this can characterize Manilov and all the "party" close to him in a certain way.

It is impossible not to mention another high-profile criminal case, already recent. In 2018, the FSS detained an ex-Russian kickboxing champion and the head of a collection agency on suspicion of fraud. Both received $500 thousand for helping to free the co-owner of the alcohol group Parliament Yuri Manilov.

Returning to the elections: Lyubov Sobol did not become a deputy of the Moscow City Duma. She couldn't even collect signatures. Well, everyone remembers the loud scandal with the blocking of the work of the Moscow election commission and unauthorized actions in Moscow in the summer of 2020. The mayor of the capital, Sergei Sobyanin, then noted that the riots led to serious problems on the streets of Moscow.

The lord-liberals accept the defeat very painfully. Probably, their sponsors are the same. It is not surprising, because for those 5 million rubles, Sobol could put pressure on the main competitor of the Manilovs' business, State Institition Ritual, and also provide "funeral men" with access to the Khovansky cemetery. But it didn't work out.

In 2016, a serious event took place at the Khovansky cemetery - a mass brawl with a shootout, in which about 200 people participated. Dozens were injured, three were killed. The former head of the department No. 3 of the State Institution Ritual Yuri Chabuev was found guilty of organizing the riots. It could be about controlling the cemetery and redeveloping the funeral market. Today it is clear that the real instigator and provocateur of the situation could be just the competitors of the State Budgetary Institution. 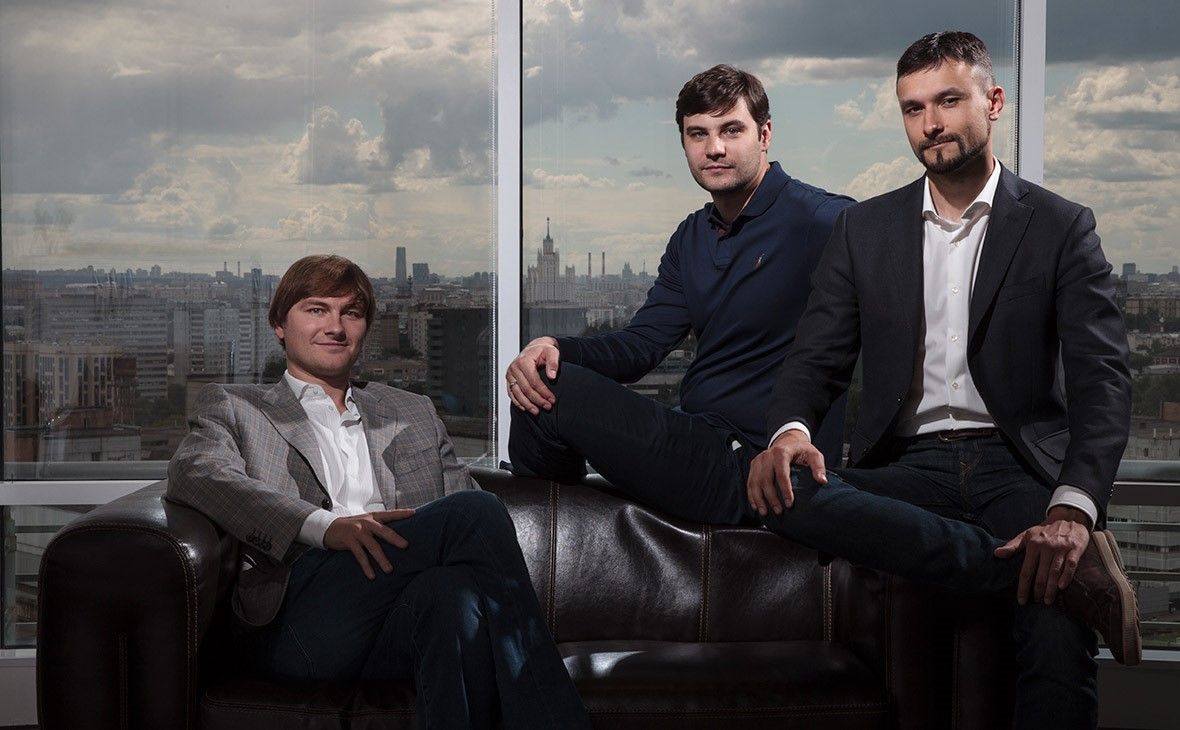 JSC Chestny Agent is one of the two major players in the Moscow ritual market. The company JSC Gorbrus is mentioned together with it. However, there is a connection between them, which may be a reason to suspect the structure of wanting to monopolize the funeral market of the capital. Both companies are active competitors of State Institition Ritual.

Artem and Ilya Manilovs have another company registered in 2016- VGMK-Invest LLC. The CEO is Yevgeny Vugin, who is also one of the founders. In 2016, another office, Rittex LLC, was registered. Its co-founder was just VGMK-Invest LLC, and Artem Manilov became the general director. It was this company, LLC Rittex, that was transformed into JSC Chestny Agent, in which Artem Manilov became the general director.

In his turn, Evgeny Vugin, who was the director and co-founder of VGMK-Invest LLC, became the General Director of Gorbrus JSC, which also has several subsidiaries. The structure is extremely interesting for its financial statements.

In such a profitable market in terms of funeral services, as in the capital, the company for 2019 managed to go into the negative by 243 thousand rubles with revenue of as much as 180 million rubles. Where's the money? Did it go to the election campaign of the opposition, or may be simply withdrawn abroad? By the way, the same questions may arise to the business of Yuri Manilov, Parliament Group…

The company with 10 thousand authorized capital, liquidated in February 2019, has not shown any profit since at least 2013, and in 2014, when the scandal with the arrest of Yuri Manilov in the extortion case barely subsided, it showed a loss of 44 million rubles. At the same time, according to the results of 2019, the company does not have any profit or revenue, as well as the value of assets. Money gone?

In this regard, an interesting reason of liquidation of the company, as the reasons for the elimination of the above-mentioned Rittex. One of the founders of the latter is the software development company Cloudmaps LLC. At the very least, it is strange that a structure with an authorized capital of 10 thousand rubles has accumulated state contracts for as much as 55 million rubles. While revenue at the end of 2019 amounted to only 22 million rubles, profit-3.8 million rubles, and there were no worthwhile assets behind the structure at all. 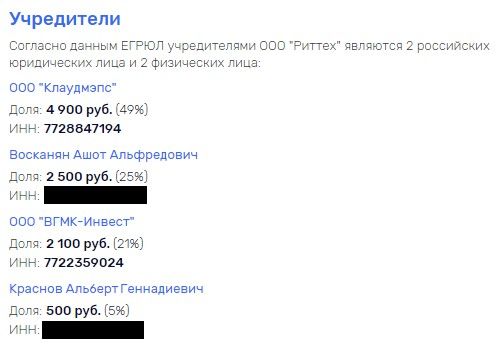 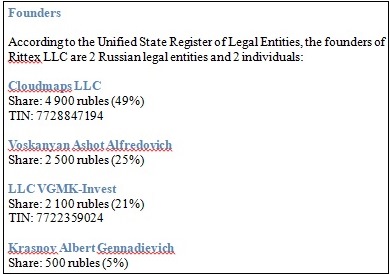 It is also interesting that the holder of the register of stocks of JSC Gorbrus is CJSC RDC Paritet. The same company acts in the same role in relation to JSC Chestny Agent. At the same time, Gorbrus, it turned out, does not shy away from working with the state, having received from it state contracts for 15 million rubles. But how much does such work benefit the state?

According to evil tongues, allegedly both Gorbrus and Chestny Agent can be no better than the funeral mafia, which the liberal media criticize at every turn. That is, calling the relatives of dead people, imposing their services and inflated prices. If this is true, why don't law enforcement officers take a closer look at them?

It seems, they have looked closely. According to RBC, in October 2020, the FSS in the Moscow region conducted a search in the Balashikha crematorium Gorbrus, where the funeral company Chestny Agent rents an office. Interestingly, neither side has mentioned the reason for the searches, and Artem Manilov himself linked them to pressure from competitors. And directly these competitors were pointed out - GBU Ritual.

It seems that the increased attention of the security forces is the reason for the desire of the Manilovs to continue their business in the United States. And at the same time, probably, it would be possible to take there the money earned by God knows how in Russia. Taking into account the failure of the opposition in the elections to the Moscow City Duma, people simply do not believe them, and therefore the opportunity to earn becomes less. Is America waiting?