Has Alexey Gordeev's godson Yuri Parakhin made Oryol his fiefdom and is arranging his own orders there, knowing that the influential patron is behind him?

According to the correspondent of The Moscow Post, Yuri Parakhin became new Mayor of Oryol. The appointment did not come as a surprise to anyone: this gentleman has long been engaged in business and politics in the region, and in this connection, even, as the Orlovskiye novosti wrote, became a person involved in criminal cases. Did Deputy Chairman of The State Duma Alexey Gordeev "present" his godson a patrimony?

Parakhin was elected by deputies of the local City Council. Not without scandals: during the meeting, the hall was defiantly left the by Fair Russia faction and self-nominees, because they did not want to participate "in a grand performance", Orlovskiye  novosti wrote. What was happening was called a farce - they say that it was decided to put Parakhin as mayor a long time ago.

Apparently, Parakhin's candidacy was promoted by the Governor of the Oryol region Andrey Klychkov. This is indirectly indicated by the fact that the adviser to the head of the region Sergey Lezhnev broke out a whole tirade of praise to the future mayor in his telegram-channel.

Apparently, Parakhin attracted Klychkov's team with his work as head of the Oryol district administration, which he has been since October 2016. However, he has been in local politics for a long time - from 2009 to 2014, he worked as Deputy Chairman of the Government of the Oryol region. And even before that, he was actively engaged in business and was almost always a "favourite" of those in power. In general, the name of Parakhin is known, it seems, to every resident of the region.

His father, Nikolay Parakhin, had been rector of the Oryol Agricultural University until his death in 2016. He probably helped his son almost from the cradle to build a career — he chose Alexey Gordeev to be his son’s godfather, with whom they were good friends, as FLB wrote. Both Gordeev and Parakhin were not residents of Moscow when they were students, and then worked in the same direction - Gordeev headed the Ministry of Agriculture of the Russian Federation for several years.

According to the Region-Centre, it was Gordeev who recommended in 2009 to new Oryol Governor Alexander Kozlov, who worked as Gordeev's Deputy in the Ministry of Agriculture, to appoint Parakhin as Deputy. In 2016, he asked to bring his godson to the post of head of the district from Vadim Potomsky.

So that's how managers are chosen in Russian regions! Does the good old nepotism still decide everything? It is curious how long ago Parakhin Jr. enlisted the support of "daddy" Gordeev? After all, long before Yuri Parakhin had political ambitions, he tried his hand at business. At the same time, he tried so successfully that presumably he almost "for a pretty face" got a plot in the very centre of Oryol.

The story took place in 2005-2006. Then Mayor Vasily Uvarov "presented" a plot on Moskovskaya street to a certain Partner LLC - moreover, he did it after an active correspondence with a certain Parakhin Yu. N. the Piquancy to the story is added by the fact that at the time of the then Mayor Uvarov's decision, allegedly Partner LLC was not even officially registered! According to FLB, the letterheads of the organization on which the correspondence was sent allegedly had no legal data except for the address. Was it, in fact, a useless scrap of paper? 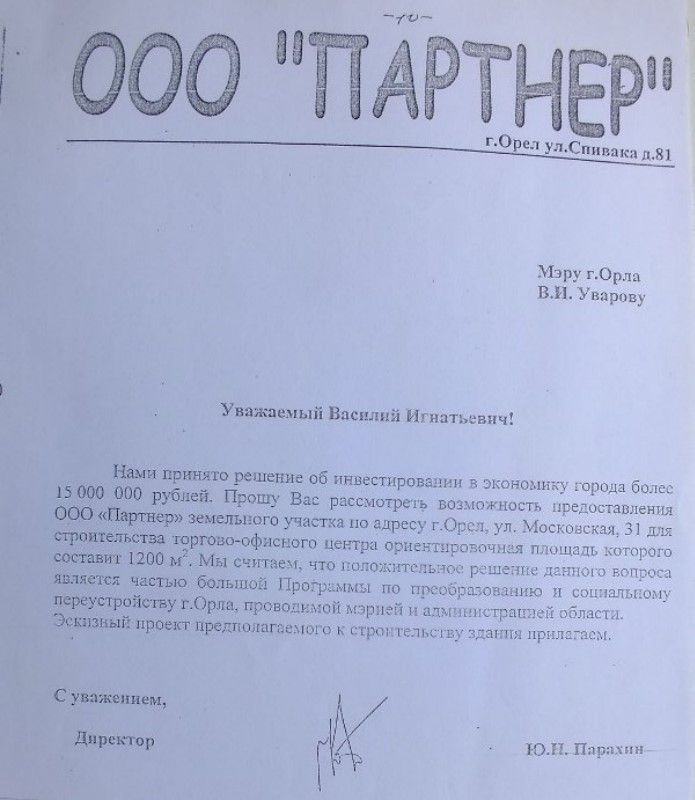 Examples of correspondence from Parakhin to Uvarov

But that's not all. According to Orelgrad.ru, there was a monument of history and culture on this place, a historical building, which was also recently renovated. But in the end it was demolished as dilapidated.

As a result, an internal audit was appointed on this occasion in 2006 by the decree of new Mayor of Oryol, Alexander Kasyanov. According to its results, it was found that the building was demolished in violation of the law, resulting in damage to the city of 1 million rubles. It smelled like a criminal case. But it was not possible to develop this topic: soon Kasyanov himself became a person involved in the trial.

Meanwhile, Partner LLC is still operating today. And managed to become involved in another scandal. According to Orelgrad.ru, it attracted the attention of law enforcement agencies by receiving a loan from Sberbank, the rate of which was allegedly underestimated.

According to Rusprofile, now Partner LLC is owned by a certain Anastasia Parakhina, who is called a relative of the new Mayor. This is supported by the fact that Yuri Parakhin himself was managing the company from the end of 2019 to October 2020. And probably left a close person after himself. At the same time, the family manages the asset not so well - the company has losses of 11 million rubles.

Parahin was linked to another Oryol enterprise — Ecocity LLC, where the founder is its namesake, though with a different middle name. However, according to detractors, all the Parakhins in the region have some degree of kinship.

But what is known for sure is that Ecocity, engaged in the waste business, was tried to be "taken away". At the same time, as Argumenty Nedeli wrote, it could be done in the interests of the then Governor Vadim Potomsky. The entrepreneur even submitted an application to the IC of Russia, complaining about the attempt of "raiding".

And, here is a coincidence, the attempt to take the business away was preceded by a public conflict between the politician Yuri Parakhin and Potomsky! Relations between the two civil servants clearly did not work out: Parakhin even left the post of Deputy Prime Minister and went into business as soon as a new head came to the Oryol region in 2014. What amazing coincidence!

At a time when the region was "ruled" by Potomsky, a criminal case was even opened against Parakhin on illegal entrepreneurship, as Orlovskiye Novosti wrote. According to law enforcement, Parakhin, being a civil servant, took part in the work of six commercial organizations. In 2012, one of them (apparently, we are talking about Partner LLC) received a multimillion loan at a low rate, and the official put pressure on the financial institution. However, the case was quickly hushed up - surely Alexey Gordeev stood up for his godson, didn’t  he?

Recently, Parakhin became the hero of the next scandals. As Orlovskaya sreda wrote, Parakhin actually captured a plot of green land in the village of Gorki in the Oryol region. In 2017-2019, an operation was carried out there to eliminate more than six hectares of green space and further develop a cottage village on this site.

In addition, he was accused of renting an expensive Volvo car at the expense of budget funds. As Orlovskiye novosti wrote, they rent a car from the Moscow company named Ochakovo, at a suspiciously low price. And from Ochakovo, threads lead to companies owned by relatives of former Vice-Governor of the Oryol region Igor Soshnikov, who is suspected of embezzlement and has escaped abroad. Does Yuri Parakhin help criminal elements?

Or does Parakhin expect that if he finds himself in a difficult situation, he will also be supported? And another criminal case may already loom before him: now the Prosecutor's office has shown interest in investigating the criminal case on the construction of the regional hospital building, which was supervised by Parakhin, as Deputy Chairman. Law enforcement authorities believe that about 300 million rubles disappeared without a trace at the construction site. This was reported by in Orelgrad.

What to say, Oryol is now "ruled" by a very interesting character, obviously having connections both in politics and in business. He knows the city well and for a long time - surely he has already looked after what he will "take off" for himself? After all, it is necessary to send a gift to godfather Gordeev in gratitude for the years of support. However, will ordinary residents of Oryol be grateful for this?