God Nisanov is putting up customers "for rent"

Employees of God Nisanov admitted that they are not going to build housing for the deceived rent interest holders. Instead, they want to run it for commercial purposes.

The co-owner of Kiev Square, God Nisanov, is probably not going to finish building the VernadSky residential complex, which he “squeezed” out of its former business partner’s Ilgar Hajiyev’s hands. Will the money of the apartment rent holders go to the new shopping center?

It is unlikely that Nisanov thought about the fate of hundreds of equity holders when his people “broke into” the offices of the SDI Group and stormed the construction sites of Ilgar Hajiyev in an all-encompassing fashion.

The latter, due to threats, was forced to leave for London. Flera Teplinskaya accidentally let out what could "grow" in the place of one of the LCDs - LCDs "VernadSky".

The lady suddenly “appeared” just on the day of the capture of the office of the SDI group and introduced herself as the manager of the company. More precisely, the manager of Mr. Nisanov? A video from cameras appeared on the network in which Teplinskaya states that there will most likely be no residential building, since Kiev Square is engaged in commercial space!

That is, the invested millions of Hajiyev and the money of interest holders will go to Nisanov’s business quirks ? A correspondent of The Moscow Post decided to research more on this.

Flera Teplinskaya: "Yes, most likely, there will be no residential housing, probably. Kiev Square doesn’t deal with residential complexes. All objects are commercial. For rent"

It is unlikely that Teplinskaya “blurted out” without thinking. The Moscow Post has already written about how top managers famously faked signatures and put their strokes under payments, the money that went to accounts of unknown companies. And the enterprising lady was not at all embarrassed, neither in front of the cameras, or after the refusals of the CEOs.

For example, the head of Accord Spetsstroy LLC (part of the SDI Group structure) Valery Nozhichkin refused to sign documents for the issuance of obviously bad loans, but this did not stop Teplinskaya! According to Ilgar Hajiyev, millions "flowed" into the accounts of dummies on false documents!

So Mrs. Teplinskaya, as they say, is “in the game”. There is a possibility that the VernadSky residential complex will really be turned into a huge shopping center, and the remaining spacious rooms will be rented out. A great offer for the office, because the complex just stands near the metro. Except the customers that already invested in the apartments will be left to “cook” on the street without money and protection, and they will of course unfairly blame Hajiyev!

Recall that the businessman was implementing the VernadSky project together with his brothers German and Isai Zakharyaev - longtime comrades of God Nisanov. The residential complex combined a 3-story shopping center and more than 20 floors of residential real estate. In September 2018, apartments began to be sold, and the results literally blew up the market in the area. Two months later, more than 40% of residential square meters had already been sold, and lists of potential buyers were started on commercial premises. It was then that Nisanov realized that he wanted to hit the jackpot!

As The Moscow Post already wrote, Hajiyev was literally forced to leave the project, and was promised compensation in the amount of $ 5 million and a “pack” of contracts in 2019 for a total amount of about 20 million rubles. Moreover, the mayor of the capital, Sergei Sobyanin, was supposed to receive 12% of the amount! Nisanov also asked for his share. And as soon as Hajiyev began to abandon barbaric conditions, threats worsened. In the same year, the brothers from the private security company Vityaz seized control over the structures of the SDI Group.

Hajiyev and his business partners who worked on construction sites and the deceived rent interest holders are trying to reach out to law enforcement agencies and influential officials. Most recently, a petition appeared in the network addressed to the President from residents who had invested in the Pirogovskaya Riviera residential complex project. According to the defrauded real estate investors, the construction is completely stopped, the apartments in the already built houses cannot be registered as the property of the developer with the subsequent registration of the purchase and sale with buyers, since the accounts of the company-developer Specialized Developer ComfortInvest LLC are blocked.

Is it likely that Mr. Nisanov is not going to finish building the Pirogovskaya Riviera residential complex? The money invested by equity holders will be "withdrawn" from the structures using forged documents, will the phone numbers on the developer's website be changed, and a lock will be hung on the office door? Who will return the money, nerves and time to the residents of the capital? It is curious that this whole “song” has been stretching for several years, but the mayor of the city does not seem to notice the problem. Maybe it’s all about the systematic “kickbacks” that Ilgar Hajiyev spoke about?

Endless construction projects shout about the inexplicable "love" of Sergei Sobyanin for the business dealings of Nisanov and his partner Zarakh Iliev. Entrepreneurs own two restaurants in the Zaryadye park, the future multifunctional complex with a hotel in Varvarka near this park, a reconstruction project for the Velozavodsky market, Shchelkovo bus station, and the Olimpiysky complex. In addition, in the hands of Nisanov and Iliev, the Moscow, Sadovod, Food City markets, the Grand business center, Panorama shopping center, the cruise company Radisson Royal Moscow and further on the list.

But not only Sobyanin, but also the former Prosecutor General of the Russian Federation Vladimir Kolokoltsev can sit in Nisanov’s patrons. The thing is that his beloved son and part-time businessman - Alexander Kolokoltsev - as the rumours say, is connected to the “sweet duo” of Nisanov and Iliev. Everything is simple. Kolokoltsev Jr. controls 33.4% of Il Forno LLC. The  company that has only brought loss instead of profit is engaged in restaurant business. But here is the interesting thing. Until December 2017, a certain Oleg Yusupov sat in the founders. The latter is allegedly considered not just a business partner of Nisanov, but also his relative. 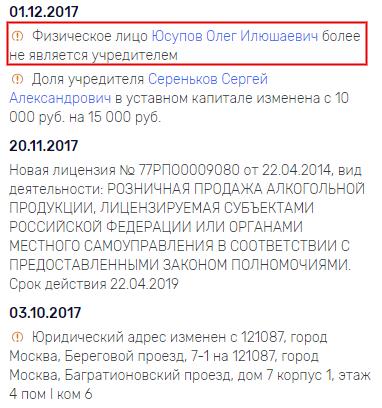 And this is not the only project of Alexander Kolokoltsev with Yusupov. The latter, together with the son of the former prosecutor general, was the founder in another unprofitable company - LLC Brinda. Yusupov left the restaurant project in November 2017. Interestingly, did he manage to avoid checks on millions of losses thanks to the influential dad?

But that's not all! Yusupov does business with a possible relative of Zarakh Iliev - Iliev Ben Zion Zarakhovich. Together they sit as the founders of the next unprofitable office of Optima LLC. Ben Zion Iliev, in turn, controls a stake in LLC Kievskaya Ploshchad 1. How great the cards came together! Now it’s clear why the seizure of Ilgar Hajiyev’s business was passed by the security forces. Yusupov "agreed"? 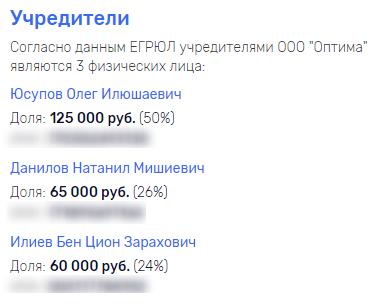 By the way, Nisanov's cousin - Vladislav Yusupov, probably actively hosted the captured sites of the SDI Group. The withdrawal of money from Hajiyev’s structures was often controlled by a certain Vlad. Is it not Yusupov? 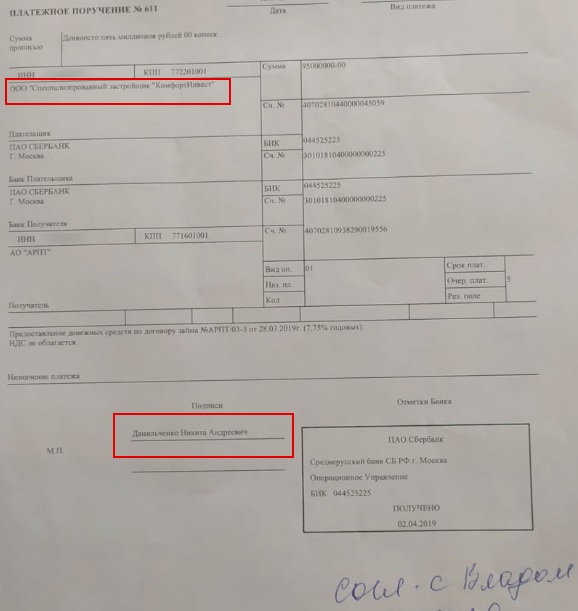 The quote "agreed with Vlad" is on almost all payment contracts!

With such possible connections, is Nisanov not afraid of anything? Searches raged in the markets of the scandalous developer last year. According to one version, the visit of the security forces was connected with cryptocurrencies - supposedly, a large-scale laundry was operating at the Nisanov markets. That's just, according to rumors, Nisanov was ready for the "roundup". But who warned him of the search? Mr Kolokoltsev subordinates?

But after the resignation of the prosecutor will Nisanov face problems? Nisanov and a certain Anar Shadlinsky? The latter is called the "shadow accountant" of the businessman. Rumor has it that Shadlinsky can "launder" fabulous amounts through the supposedly controlled by him "New Moscow Bank".

Perhaps for this reason, back in 2018, the Central Bank allegedly brought to administrative responsibility due to failure to comply with the requirements of the legislation on combating money laundering of the proceeds of crime by the head of the credit structure, information about this is published on the Banks.ru website .

The fact that the bank can act as a kind of "laundry" is also indicated by financial indicators. Surprisingly, from February to March this year, net profit fell as much as 112%! What kind of bank is this in which there is no money? Or maybe they are not, because the amounts simply do not have time to accumulate? 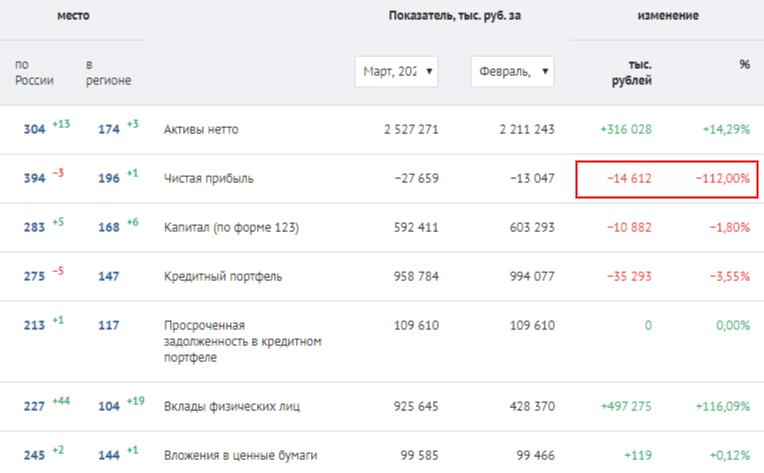 If the credit structure is really controlled by God Nisanov, then have millions of deceived equity holders been in other people's accounts for a long time? Millions that people have hoarded for years! Apparently, the scandalous entrepreneur and his partners are perfectly settled on the wreckage of someone else's business! With the money slowly flowing out of Hajiyev’s structures, will a new large shopping center and a colossus stuffed with offices soon grow on the savings of deceived investors?

12 April, 8:09
"Honey smeared": Nisanov from Sobyanin to Vorobyov and back
See also