"FSS-clones" and Ivan the fools in the "sight" of Bellingcat

The new "investigation" under the possible cover of the Western special services about the "poisoners" from the FSS does not cause anything but bewilderment. Are Russians being taken for fools?

According to the correspondent of The Moscow Post, international "investigators" of the Western media Bellingcat, Der Spiegel and The Insider (is a foreign agent in Russia), which may have a conglomerate of foreign intelligence services behind them, have issued another batch of indigestible delusions concerning the alleged poisoning of Russian citizens, by "Novichok" in which the FSS was accused again.

Moreover, among those whom they are trying to present as victims of the "bloody regime" were quite unexpected people. Among them is a well-known former journalist Nikita Isaev, who passed away in November 2019 on the Tambov-Moscow train.

Isaev was the leader of the New Russia movement, which advocated order and law in the country. He, unlike "Navalny followers", did not publish "fakes" about Russian state officials, did not try to discredit the Russian government, and certainly did not throw mud at the country's President Vladimir Putin.

Even more interesting is that Isaev could have become a system politician at all. Shortly before his death (heart attack), the journalist was appointed adviser to the head of the Fair Russia party Sergey Mironov. It was even rumoured that he, Isaev, could later become the leader of the party himself. That is, one of the political forces that support the President, and for that they were critised by Navalny. Where is the logic?

Among the other "victims" of the publication there is the journalist and human rights activist Timur Kuashev (died of acute coronary insufficiency in 2014) and the activist of the public movement Yedinstvo Ruslan Magomedragimov (died of suffocation in Kaspiysk). And here the logic is lame. These two did not wage any fierce struggle against the "regime", although they were not "loyalists" at all. But in Russia, there are much more radical to the authorities people in Russia. And they're alive. Again, where is the logic?

But it's only the beginning, because the whole point of "investigation" of these publications is to ensure that allegedly the same people from the FSS poisoned them, which, according to a wide pseudo-liberal community in the face of Navalny and his minions, allegedly tried to poison "the opposition politician of All  Russia". Moreover, two "same" FSS officers allegedly visited Salisbury, where the performance with the "poisoning" of the Skripals was played out.

We are talking about some Stanislav Makshakov, Oleg Tayakin, Alexey Alexandrov, Ivan Osipov, Konstantin Kudryavtsev, Alexey Krivoshchekov, Mikhail Shvets, Vladimir Panyaev. Their names are given by the Meduza publication (it is a foreign agent in the territory of the Russian Federation). The question is not even whether these citizens work in the FSS, because the authors of the publication do not present any real evidence that they are related to the special service at all. The question is different.

Even if you believe for a moment in the nonsense spread by the "investigators", the question inevitably arises - friends, are there only 4-6 people working in the FSS, who for many years, the same ones, travel around the country and abroad, thinking about who else to mix "Novichok" in tea to? Could they be clones? 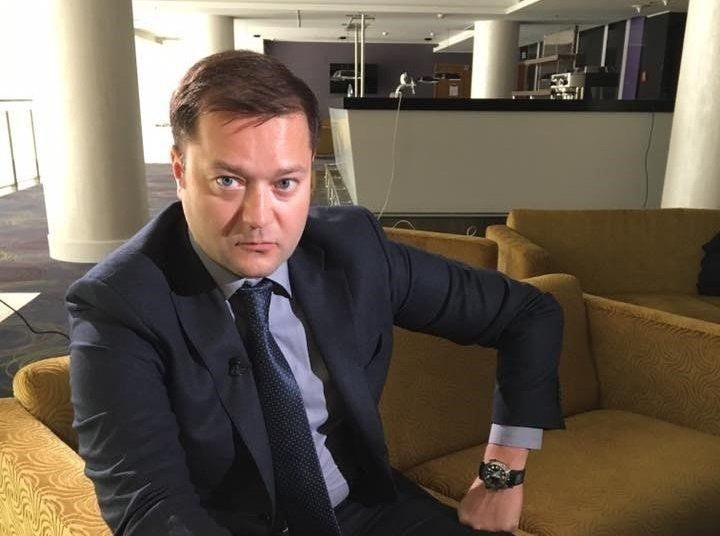 Even Nikita Isaev, who had nothing to do with the "righteous struggle" against him, is being portrayed as a "victim of the regime".

And the "investigators" believe that most Russians will take this at face value? We are not talking about the "legendary" conversation between Navalny and his supposed "poisoner", allegedly from the FSS, who "betrayed" everyone and everything in the spirit of an unsecured telephone line. No FSS officer will ever discuss any operations over the phone with anyone.

Of course, they do not give details of the alleged "poisoning" of Isaev, Kuashev and Magomedragimov, and the whole essence of the investigation is reduced to analyzing the movements of FSS officers around the country. They say that they were in those cities at the same time, where the dead people were.

The "investigators" received information about these movements from certain databases that are freely sold on the darknet. We explain it: they can not confirm the authenticity of this information in any way or in any way.  One moment and here's another scandal for you.

To understand who we are being taken for, we need to say a few words about the investigators themselves. Let's start with The Insider - despite the name in English, it is a Russian publication created by the journalist and political activist of the liberal-democratic persuasion Roman Dobrokhotov. And it was created in November 2013, and this is probably not accidentally.

Just in those days, the Maidan took place in Ukraine, the consequences of which we see today - a destroyed country, a colonial administration represented by members of the supervisory boards of strategic enterprises, a civil war and mass discrimination of the Russian-speaking population.

Is it necessary to say which side - the radical rioters or the legitimate Ukrainian authorities - the publication was on? There is an opinion that the formation of The Insider aimed to create another mouthpiece of pro-Western propaganda regarding the Ukrainian events already on the territory of Russia.

Later, The Insider seized on any scandal, whether it was the crash of a Malaysian Boeing over the Donbass, the situation with the Skripals and the same with them. And what role do you think Russia played in these publications? It looks very much like a supposedly "greedy" and "bloodthirsty" country under the rule of a "tyrant". On what money could all this happen? Western "donators"?

Unlike The Insider, Der Spiegel ("Spiegel" - "Mirror") is a really old and respected publication. Only it is difficult to call him unbiased. For many years, its journalists have been criticizing Russia and its leadership for nothing. And in combination with the authority and modality in relation to the Russian Federation, it is simply an excellent channel for "leaks", "fakes" and other propaganda. After all, the publication is trusted.

The most interesting of the three, of course, is the Bellingcat from the UK. Many experts from the media environment have no doubt that the publication may be directly related to the British intelligence MI-6, and could well have been created specifically for information operations to discredit Russia and its leadership. When you get acquainted with the history of Billingcat, many things become clear.

It turns out that it was created in July 2014 by Eliot Higgins, just two days before the Boeing plane crash over the Donbass. At the same time, the agency without experience and history was immediately assigned to investigate the incident. This was written by Regnum. Of course, the perpetrators were immediately found - pro-Russian separatists, Russia and its military and political leadership. Well, really - what's there to think about?

Recall that the investigation into the case of that tragedy has been going on for six years. There is no real evidence of the Russian Federation's involvement in the incident. As a matter of fact, it seems that this is why the investigation is stalling. And to blame the Ukrainian "warriors", apparently, political expediency does not allow.

The Bellingcat theme was trusted perfectly. After that, the investigations appeared swiftly and in abundance. The Skripals, the situation in Crimea, the civil war in Ukraine-everywhere and always there was suddenly a trace of Russia. Thus, Bellingcat and other similar investigators began to form the information agenda, both in the Russian Federation and in Western countries.

What is the consequence of such work, in addition to the moral pressure on Russia? Of course, more and more sanctions for more and more sins that were imposed on our country. Markets were closed, accounts were frozen, and entry was banned. It is very similar to an unhealthy, anti-competitive policy in the global socio-political field.

Just a few examples, the impetus for the appearance of which was the investigation of this and other dubious publications. These are Europe's accession to the US sanctions against Russia, the failure of the plan for the accelerated development of the BRICS, the rejection of the South Stream and the threat to the implementation of the Nord Stream-2 project. 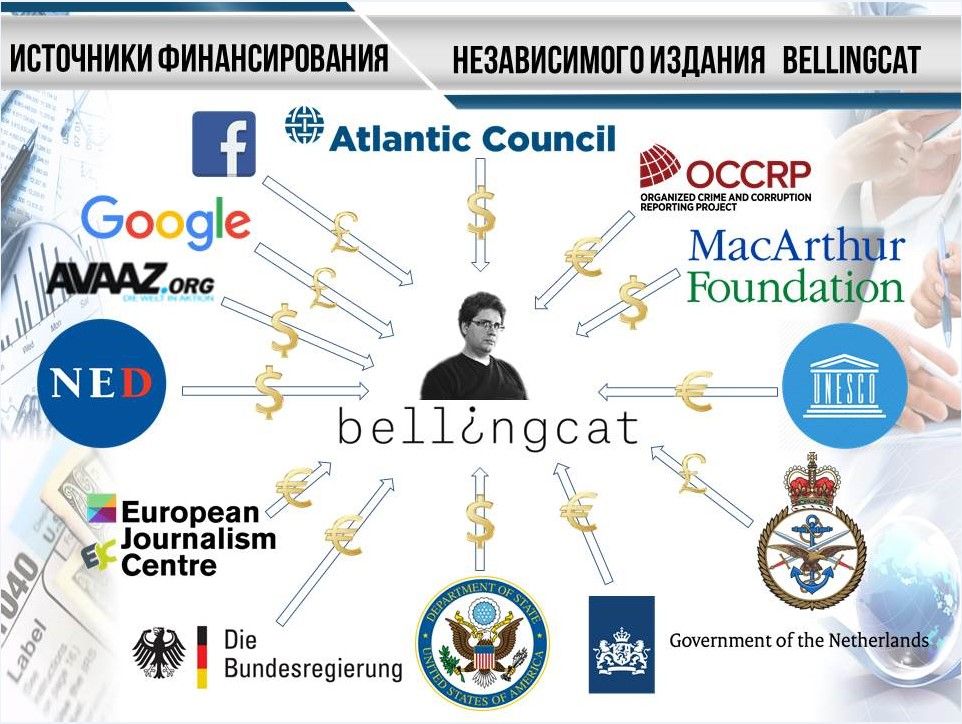 Do they, in Bellingcat, want to tell at whose expense the "party" is?

And here is a list of the main characters of the publication. Higgins himself, according to Regnum, previously worked with a non-governmental organization that was accused of financing terrorists and trying to sell Syrian oil from the occupied territories in Syria. Wow.

Another investigator, Aric Toler, previously worked in the intelligence department of Bank of America Merrill Lynch and turned out to be an expert in Russian-Ukrainian relations. Cameron Colquhoun  is a senior analyst at the UK Government Communications Center and a consultant at the Livermore National Laboratory, whose main task is to develop nuclear weapons.

Next, even more remarkable shots: Nick Waters is a retired British Army officer. Dan Kaszeta  - specialist in the field of weapons of mass destruction, a Lieutenant in the reserve of the US army. Chris Biggers is a military and political analyst at the Hudson Institute (USA).

Justin Seitz is a Washington-based NGO that specializes in security issues and works closely with U.S. law enforcement agencies. Alberto Fitarelli - Head of the Strategic Intelligence Group (Amsterdam). As they say, draw your own conclusions.

Let's add: what happened to Alexey Navalny and other people who appear in the "investigations" should be thoroughly investigated. But when Russians are thought to be outright fools, it becomes sad.