What connects Oleg Sviridenko, state billions, the Latvian Rietumu Bank, and what does Alexander Gafin and Dmitry Tafintsev have to do with it?

It seems that a few minutes are left till the last act in Oleg Sviridenko's ballet of Themis. As the correspondent of The Moscow Post reports, his loyal and permanent assistant Dmitry Tafintsev in an attempt to regain his place in the civil service through the court, it seems, may run into a "criminal case".

According to the VCHK-OGPU telegram channel, allegedly he was under the attention of the FSS. If this is true, then it is only a short distance from him and to Oleg Sviridenko, who left the post of Deputy Chairman of the Supreme court of Russia for the so-called "honorary pension" in the form of a place as Deputy Minister of justice of the Russian Federation.

However, it seems that he will not be able to sit out this position quietly. Many threads lead to the assumption that he could withdraw funds from the state budget through the Latvian Bank Rietumu Bank under the assistance of Alexander Gafin and Tafintsev. They even started a joint company.

It is possible that this scheme is already known in the government, and as soon as the highest authority gives the green light, arrests will begin. And, taking into account how Sviridenko began to actively overgrow with scandals, "traffic light" can switch in the near future.

And his case moved to the Moscow city court, because it is necessary to consider the materials of the FSS, "including the letter of the FSS, which has the stamp "Secret", which can not be presented to the district court," the ruling says. 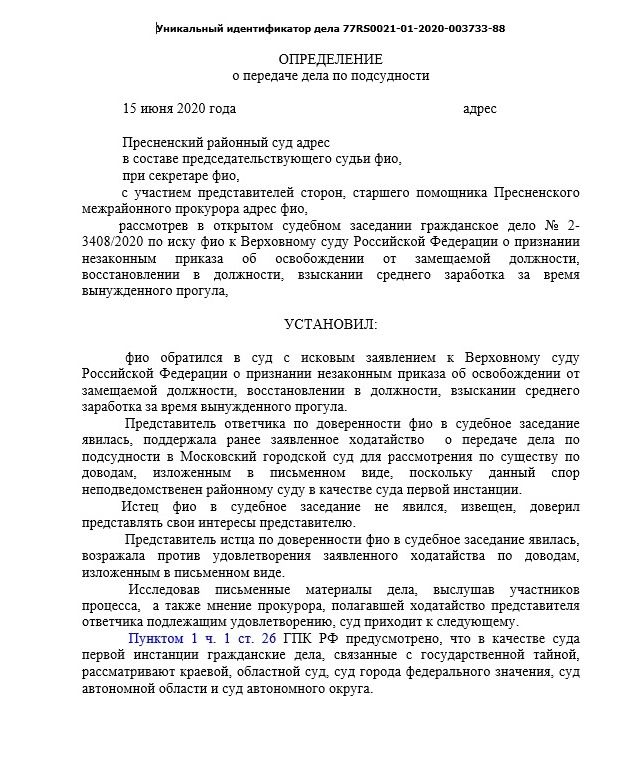 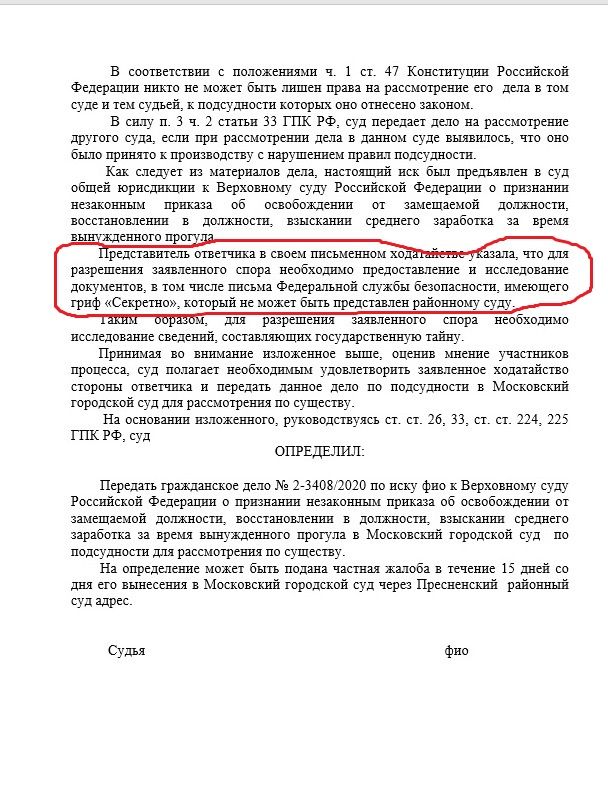 It can be assumed that Tafintsev was in the development of the FSS and compromising materials could be submitted to the Supreme court of the Russian Federation, which was the reason for his dismissal.

Dmitry Tafintsev is called no other than one of Sviridenko's "financial representatives". He was responsible for the flows and searched the profitable affairs. And he worked through his own companies: Alpina-Times CJSC and Strategies of the Future LLC, the Young Cinema development assistance Fund. Now according to Rusprofile they are eliminated.

CJSC Alpina-Times was a supplier in 5 state contracts for the amount of 12.6 million rubles from the Gorelektroset municipal unitary enterprise. Alpina-Times LLC became the legal successor, but with a new founder – a certain Andrey Zemlyakov.

It literally shot the profit. And according to open data, it began to bring in half a billion rubles annually, with no state contracts specified, and for 2019, the profit is only 40 million rubles. According to some rumors, this money mights be related to Sviridenko.

Tafintsev has another interesting asset - Strategies of the Future communication centre of the strategy LLC. The organization has also been liquidated. But among the founders there is such a figure as Alexander Gafin. 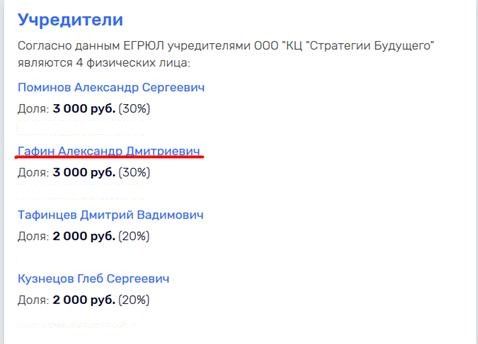 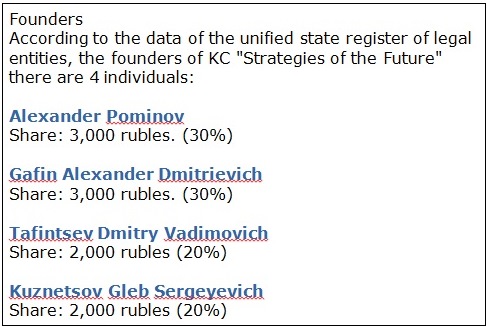 According to Rusprofile, it was Tafintsev and Gafin who organized this company, and in 2017 it was added by several more founders, and after a while it was completely closed. Apparently, after completing the transaction, it was thrown away like a used glove.

Alexander Gafin is an interesting person who combines a love of art and business. He likes to make art out of politics. His organizational skills in exhibitions show this: "Khrushchev, those 10 years", "Mitki in Moscow","The Afghan war" and others.

We must pay tribute to both musical taste and scale. The money around him is great. He brought Paul McCartney, Tina Turner, Elton John, Sting and others on tour.

Does he know how the budget billions that may be related to Sviridenko were withdrawn? This idea is suggested by many facts and dark spots of Rietumu Bank's reputation. 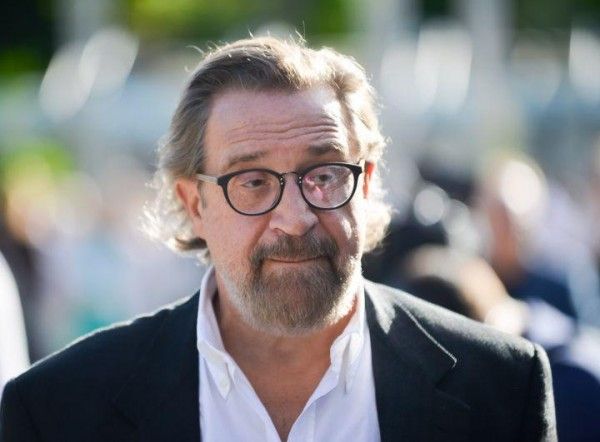 As it is known, Latvian banks have long served as a platform for withdrawing money from Russia through offshore companies. In 2018, the Ministry of Finance of the country decided to "close the shop" and transform the financial sector. There were too many dirty schemes that began to hit the reputation.

Rietumu Bank thrived on the number of depositors. Once in the media, Alexander Gafin boasted that the Bank attracted about 60 depositors from Russia, Ukraine, and Kazakhstan over the course of a year.

And of course, then he was highlighted in this financial laundry of Latvia, when the dirty affairs began to be revealed. As Forbes wrote, charges of money laundering were brought against Rietumu Bank and its President Alexander Pankov in France.

The Bank, along with five others, was also involved in operations in the Magnitsky case: $63 million of the $230 million stolen from the Russian budget in 2007 passed through their accounts.

Did Oleg Sviridenko's money flow through the Bank, laundered through the dubious companies like Strategy of the Future by Takintsev?

Clouds have been gathering over Oleg Sviridenko for a long time. Only recently, he has been exposed in several scandals.

Among the main claims of detractors there is, allegedly, personal participation of Sviridenko in large business proceedings, where he may have his own interest. For example, according to PASMI, he could be directly related to the decision to collect one billion rubles from the owner of the state farm n. a. Lenin and the former Presidential candidate of the Russian Federation Pavel Grudinin.

It was said that the story concerned an attempt to take a part of the agricultural enterprise from him. In a story around 2 thousand hectares near the Moscow Ring Road, many interests might have intertwined - deputies of the State Duma and the Moscow city Duma Dmitry Sablin and Vladimir Zhuk, head of the Moscow region Andrey Vorobyov and others.

In such a company, the Deputy Chairman of the Supreme court, who conducts arbitration disputes, might also have an interest. The Moscow Post described the connection in detail earlier.

Another scandal concerned Sviridenko's fabulous wealth. In mid-December last year, it was said that the Prosecutor General's office was conducting a check, working out a signal from the Presidential Executive Office.

Several apartments in elite residential complexes in Moscow were found in the possession of high-ranking judge, they are registered to his ex-wife Natalia Poluychik and a certain confidant. The total area of eight apartments exceeds one thousand square meters, and their cost is more than 200 million rubles, despite the fact that the income of Sviridenko himself is only a few million rubles even for ten years. The ex-wife of the Deputy Chairman of the armed forces also does not shine with huge incomes, PASMI wrote.

According to the authors of the Kremlevsky bezbashennik telegram channel, it is allegedly worth adding 200-metre apartments in the Hyatt Regency Sochi hotel, and several large estates in the Moscow region.

It should be recalled that according to rumors, the departure from the position of Deputy Chairman of the Supreme court Sviridenko for many years sought the head of the Supreme court Vyacheslav Lebedev. In this fight, there were even allegedly statements about the facts of his interference in lawsuits involving state banks and the Deposit insurance Agency documented by the special services.

There is already much rumoured about Oleg Sviridenko, so the President may get tired of it.