God Nisanov risks dragging Russia into an international scandal, while Sergey Sobyanin, who is rumored to receive 12 % payoff from him, prefers not to notice what is happening.

As The Moscow Post correspondent reports, the conflict between Armenia and Azerbaijan has led to unexpected consequences. Last weekend, amid the escalation of the conflict, it was reported that employees from Armenia were banned from trading in the Food City market, owned by the controversial oligarch, owner of the Kievskaya Ploshchad GC,  God Nisanov.

According to the Armenian Ambassador to Russia Vardan Toganyan, more than 50 trucks with Armenian agricultural products "were blocked" on the territory of the market. Employees of the diplomatic mission visited the market to understand the situation, but they were escorted out of the territory by security guards. This was reported by RBC.

The actions of the PSC Vityaz, which is controlled by God Nisanov, were caught on video. It's one thing to put obstacles in the way of people working in your market. Though this is a reason for checking by law enforcement agencies. But to turn away the employees of the diplomatic mission - doesn't God Nisanov assume too much?

If he is responsible for giving orders to security guards, does he understand that he is dragging Russia into an international scandal?

According to rumors, Nisanov's proximity to the capital's Mayor Sergey Sobyanin, allows him to feel comfortable on Moscow land. There is a video of The Facts YouTube channel, in which a well-known Russian developer Ilya Gadzhiev says that Sergey Semyonovich receives 12% of all transactions and income that Nisanov has in the capital.

Moreover, it is rumored that it was Nisanov who could help Sergey Sobyanin, allegedly financing his election campaign for $25 million. Whether this is true or not, but in this case the rumors of a close friendship between Nisanov and Sobyanin would have received a serious basis.

Allegedly, Nisanov pays Sobyanin a percentage of the activities of Food City as well. May that be the reason why Sobyanin doesn't seem to notice the tension that arose in Food City over the weekend? Sergey Semyonovich pretends that nothing is happening.

According to Head of the Moscow Department of Trade and Services Alexey Nemeryuk, he spoke with the Ambassador, and "there were no problems." This is reported by RIA Novosti. If they are really paid extra, so they have no problems, of course. Honest traders and purchasers who are suddenly left without their favorite Armenian apricots may have problems.

Amid this inaction, the situation is being heated up. According to rumors, Armenian President Nikol Pashinyan was even going to call the Russian Ambassador about the situation. It is possible to assume with a high degree of confidence that calls from the Embassy are distributed in the office of Sergey Semyonovich. But is money more important than reputation and political stability? 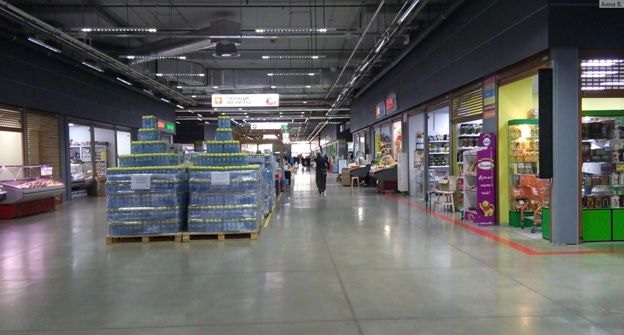 Isn't Nisanov afraid of being left without traders and purchasers under such conditions?

At the same time, Nisanov's Food City market itself has long been considered a hotbed of crime and a variety of murky cases among local residents. Fights, rumors about sanctioned products and crypto mining farms, law enforcement raids - the market has repeatedly become the place of various scandals.

In May of this year, a wave of dissatisfaction swept the market traders due to the fact that the administration of Food City allegedly raised the rent. Indignation of traders swept on the background of quarantine measures due to the pandemic. People asked the market management to reduce the rent due to the difficult situation in which the whole country found itself. But instead they allegedly raised it by two thousand rubles.

The administration of the market did not confirm information about illegal actions at that time, but in the 21st century, it is stupid to say white on black. The video of the unauthorized action got on the Internet, but even after that - no comments, no apologies.

Even before this ugly story, another one was thundering. As Kommersant wrote, last year the FSS and the IC, with the support of other structures, conducted mass searches of the market. According to security officials, there were illegal mining farms producing cryptocurrency on the market. Allegedly, these firms transferred all the sellers' revenue to bitcoin, and the cash was taken out by lorries in an unknown direction.

Of course, there is no need to talk about any taxes and state control in this case. According to rumors, payoffs to the right people in the Moscow government also go through cryptocurrency, so it would be impossible to track down and then present the facts of illegal operations as evidence.

Besides the Food City security forces then visited other Moscow objects of God Nisanov. It is about the Sadovod market and the shopping centre named Moskva. Back in April 2018, Director of the Financial Monitoring and Foreign Exchange Control Department of the Central Bank Yuri Polupanov, stated that these markets "have become almost pioneers and leaders in the offer to buy cryptocurrencies",  - his words are quoted by Vedomosti.

Payments for such operations could amount to 600 billion rubles per month. It is clear that this topic should have been handled by the FSS. In addition, they could have information that illegal exchanges flourished in the markets of Nisanov, some of which operated under the guise of ordinary cash registers.

There is another version of the visit of security forces to Nisanov's shopping units last year. According to it, the real reason was conflicts between migrant workers. Because then four participants of the skirmishes in those markets were taken away with stab wounds at once. Law enforcement officers also came to the hotel where the sellers of markets lived, and several dozen people were brought to administrative responsibility at that time.

All these scandals over the years and the inaction of the Moscow authorities have led to the fact that in 2018, more than 1,500 people signed a petition to Sobyanin asking him to close or repurpose wholesale complexes. MK.ru wrote about this.

But even before that, back in 2013, Komsomolskaya Pravda wrote about Sergey Sobyanin's statement that the same Sadovod of Nisanov would be closed, since after checks there surfaced information about a bunch of possible violations.

After seven years, who is still there-apparently, the mythical partnership with Nisanov turned out to be more preferable for the City Hall than solving the problems of residents of the capital.

Single situation in the markets would be enough to ask Nisanov serious questions. But many other sins are also attributed to him. First of all, related to his Kievskaya Ploshchad development group and - again, possible close ties with the Moscow Mayor.

Among the sins attributed to Nisanov, one can recall the collapse of one of the towers of the Ukraina hotel during its reconstruction, and the falling of the EUROPEISKIY shopping centre on the metro.

In addition, it must not be forgotten that the EUROPEISKIY shopping centre was built in the water protection zone. The construction of the shopping centre in the autumn of 2006 was disputed in court. This was done by representatives of the Environmental Prosecutor's Office. Besides, the owners of Kievskaya Ploshchad did not have an environmental assessment.

The construction of an underground parking lot could result in the collapse of the arches of the Kievskaya metro station. But Nisanov's company, allegedly, stubbornly refused to let Federal Service for Supervision of Natural Resources specialists work on the construction site. Once there was even a scuffle, but the experts eventually managed to get there.

All this carries huge risks for Nisanov himself, and for his possible patrons in the capital's City Hall. Moreover, these risks are becoming not only legal, but also political. This means that soon both Nisanov and even Sergey Semyonovich may be "given a bust on the nose" by the higher management.

What else. As Russian President Vladimir Putin has repeatedly noted, our country maintains a neutral position on the issue of the Azerbaijani-Armenian international conflict and makes every effort to resolve it as a mediator.

In other words, Nisanov's actions may cast doubt on the efforts of our diplomacy to resolve this conflict, and even inflame these passions within our country. Doesn't God Nisanov  assume too much?