From Kozhemyako good not Ishchenko

The scandal with the accusations of the head of Primorye Oleg Kozhemyako of corruption by his political competitor may cost the governor of the chair, as well as completely disorganize preparations for the elections to the State Duma.

According to the correspondent of The Moscow Post, the ex-candidate for governor of the region, deputy ZakS from the Communist Party Andrei Ishchenko accused the current governor Oleg Kozhemyako of corruption.

In a video that circulated on the network, Ishchenko claims that Kozhemyako allegedly offered him $2 million for refusing to participate in the elections in 2018. The politician assured that he refused, and transmitted the audio recording of the conversation to the FSB.

If there is at least a share of the truth in this, Kozhemyako may have serious problems. He is so called one of the most likely candidates for departure as part of the spring "governor." Many believe that for two years as governor he was busy with anything, but not with his direct duties.

Ishchenko's statement caused a whole storm of indignation in Kozhemyako's team. A spokesman for the head of the region, Makar Rudenchik, said that "this is more like nonsense of a person whose adequacy is in great doubt." His words are quoted by RBC. 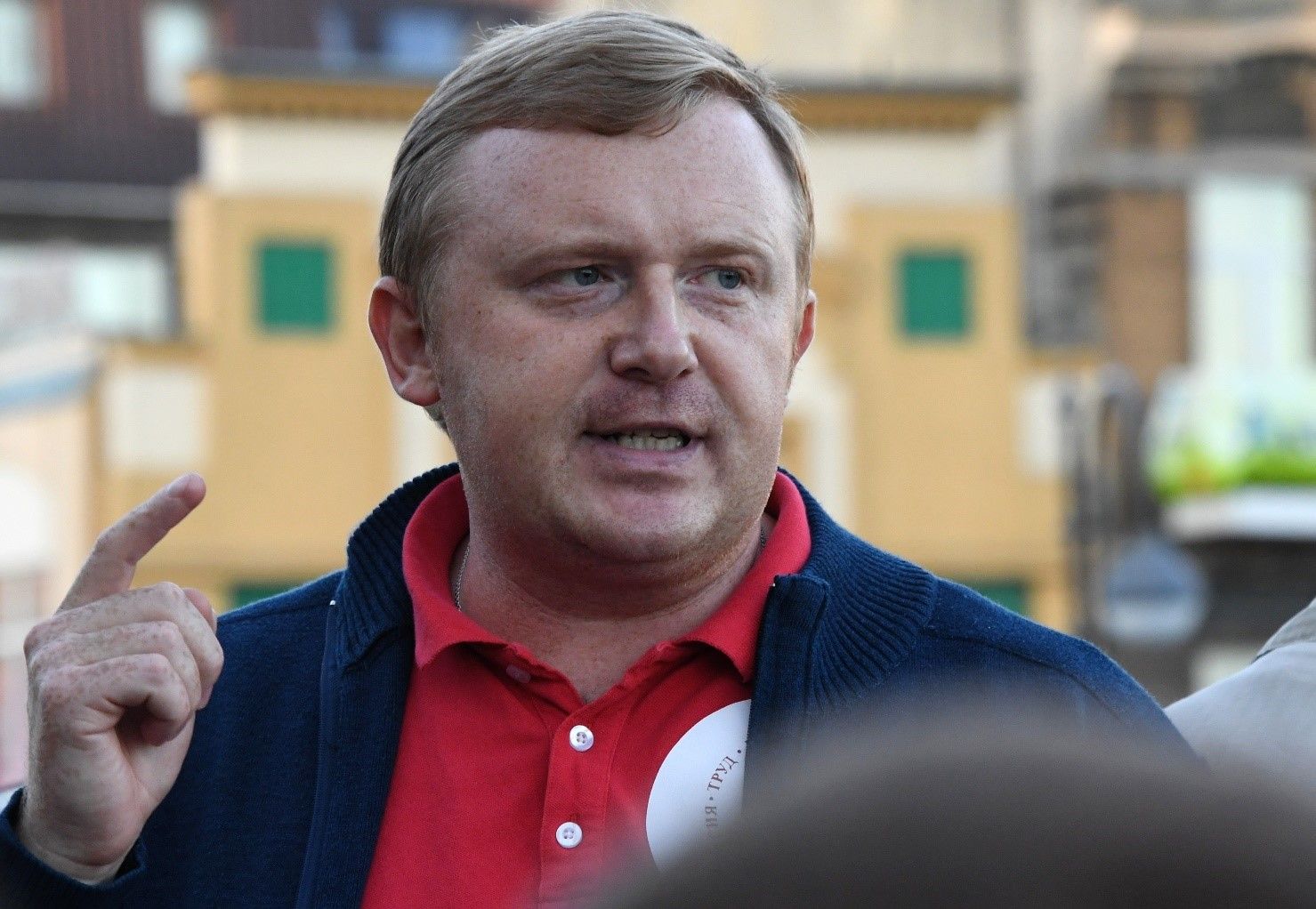 Ishchenko "went on the offensive" on Kozhemyako?

But this is only the beginning. An assessment of Ishchenko's words has already been promised in the Legislative Assembly of Primorye. Ishchenko's scandalous statements will be considered at a meeting of the committee on regulations, deputy ethics and organization of work. In general, pressure began on all fronts, and there is no doubt that the loyal Kozhemyako part of the local establishment will definitely try to punish Ishchenko.

Doing this through the Legislative Assembly, where United Russia has a majority, is easier than simple. According to evil languages, parliamentary United Russia committed to the governor is supposedly more busy lobbying their own business. And Kozhemyako is probably an indispensable assistant here.

Last summer, he helped the head of the United Russia faction in ZakS and part-time head of the Aquatechnology company Sergey Slepchenko in the implementation of a major project to build the first fish market in the Far East. The governor supported this idea at the investment council.

But such people do nothing for nothing. Probably, bash per bash consists in the political support and loyalty that Slepchenko shows. At the same time, with the filing of Aquatechnology LLC, one of the most scandalous laws on changing borders and eliminating specially protected natural areas was "pushed" in the Primorsky Territory.

Allegedly, he allowed Slepchenko's company to "go" to the Tauride estuary to catch corbicula, which was impossible before the adoption of the law - mining there was banned. The adoption of the law was preceded by heated disputes and protests by environmentalists and activists, but when it comes to large profits, the regional authorities do not hear the public.

At the same time, rumors continue to circulate that Slepchenko and his business may be connected with the business of the Kozhemyako family itself. The son of Governor Nikita is a successful entrepreneur. He is a co-owner of 32.5% of the shares of the Tymlat fish processing plant, where Slepchenko can supply his products.

Today, the shares of Nikita Kozhemyako and his partners in this business are pledged. It is strange, given that the company received 312 million rubles in profit for 2020. Moreover, who is pledged shares is not reported. Could Kozhemyako Jr. gain bad loans in the hope that dad would cover him?

In addition, Nikita Kozhemyako also owns an alcohol company that produces alcohol under the Nikita Kozhemyako brand. He, Nikita, organized a network of pizzerias, a cafe, a restaurant and much more. You just give the diva to the talents of a young man. And all by himself?

In the meantime, the governor's family is engaged in business, Primorsky Krai continues to generate more and more scandals. Last week, residents of Vladivostok launched a petition demanding the resignation of the mayor of the city, Oleg Gumenyuk. The last is considered one of the closest associates Kozhemyako, and over and over again becomes the person involved in various doubtful stories.

Gumenyuk is a weak link?

Gumenyuk was elected by deputies of the City Duma of Vladivostok in 2019 - presumably, with the filing of the current governor. In the same year, searches were conducted in the department of roads and improvement of the Vladivostok City Hall, the Vostokmedia publication wrote about this. Allegedly, the searches were associated with possible embezzlement of 17 million rubles on the construction of roads.

Gumenyuk immediately hastened to declare that we are talking about a situation when he was not yet mayor, but there are still no details of the story. According to rumors, Kozhemyako was able to take the trouble away from his associate. But this is far from the only scandal, because in 2019, Deputy Prime Minister Yuri Trutnev expressed claims about road works.

While in the city in 2020, Trutnev conducted an on-site inspection. He wanted to personally see what was done with the roads for an additional 1.8 billion rubles allocated to the city. It was assumed that the street and road network would be put in order as soon as possible to the Far Eastern Economic Forum.

The check led to disappointing conclusions. Not much where the contractors managed to fulfill their obligations and prepare the city for the event. But even after him, when Trutnev arrived, the situation is difficult to call satisfactory. According to sources, only 50% of the work was completed at a number of facilities. And there are those where only 20% of the necessary volumes are made.

They say Trutnev directly on the spot reported Humenyuk who accompanied him. The same one rested on a negligent contractor. But, according to rumors, the mayor himself may be related to one of the most successful road contractors in the city. Allegedly, in the past, it was Humenyuk who became the founder of Renovation LLC, which suspiciously wins tenders for the reconstruction of Vladivostok roads. Including the ones Trutnev recognized about.

Today, the company has state contracts for 462 million rubles. Most, 122 million, just with the UDIB of the Administration of the City of Vladivostok. Does this not look like the most ordinary lobbying story? And if the head of the region could allow such a thing, could he really try to hush up the competitor with a pack of money of $2 million?

In the meantime, the development of funds continues on the roads and in other areas, Oleg Kozhemyako continues to rush with strange initiatives - if not more. Recently, he found a "great" way to support the tourism industry. For tourists who go to rest abroad, he proposed introducing an "exit fee."

That is, Kozhemyako offers ordinary citizens to pay for the imperfection of the tourist infrastructure of the traditional resort regions of Russia, after the closure of the borders, which turned out to be unprepared to accept everyone. And, obviously, he does not care that this step will hit the least well-off vacationers the hardest, in the total expenses of which the "exit fee" will be the most noticeable share.

The seaside governor clearly does not reach the simple idea that it is possible to make Russian resorts competitive only due to their development, and not at all through the complication of access to alternative recreation. Not surprisingly, such an initiative caused a real scandal.

Of course, against the background of the statements of deputy Ishchenko, he died a little. Meanwhile, now Kozhemyako is all "on fire" - ahead of the primaries of United Russia, and the elections are already in September. It is too late to work for the benefit of residents, it is necessary to make a result here and now.

Moreover, it seems that pressure has already begun on objectionable candidates. According to the authors of the telegram channel Nedalniy Vostok, allegedly the headquarters of one of the candidates, Rosa Chemeris, filed a complaint with the regional organizing committee of the primaries due to the fact that one of the advertising agencies refused to post its banners, referring to the oral ban of officials of the Primorye government.

At the same time, Kozhemyako himself is also the head of the regional branch of United Russia. Everyone remembers the scandal in the election of Kozhemyako himself. Recall that then the elections had to be held again, and still they were sharply criticized. According to the authors of the site "Voice," allegedly they could go through with serious violations.

Whether this will happen in the elections to the State Duma can be guessed, but it seems that the Presidential Administration made it clear that everything should go without a bitch, without ass. It is already clear that this will turn out to be true. Now the entire region has measured in anticipation of the reaction of law enforcement officers to Ishchenko's statement. But that they will be given a go (if this is confirmed) - few believe. It seems that while Kozhemyako remains at the head of the region, there is no need to hope for the best for its inhabitants.