Personal data of residents of the Central Region of the Russian Federation could be in the hands of citizens of Germany, whose names were previously associated with the scandal about the withdrawal of funds from the structures of the Ministry of Internal Affairs.

The editorial office of The Moscow Post was contacted by a reader who reported that the JSC Concern Avtomatika (part of the Rostec State Corporation) could settle people who are tightly sitting on state orders from the CEC of Russia. They are also allegedly linked to German citizens Georg Witte and Vladimir Knaus - the latter became famous after the "collapse" of the Pokrovsky Bank under his control. And foreigners, according to our sources, for some reason very much wanted to get access to the databases of the Vybory State Automated System. Did people who help the Germans "get close" to the personal data of Russians gather "under the wing" of the head of Rostec Sergey Chemezov? And the Interior Minister Vladimir Kolokoltsev could advise such employees to him?

Vladimir Kabanov is now listed as the head of JSC Concern Avtomatika. Prior to joining the structure of Rostec over 10 years he worked in the structures of the CEC and, in particular, held the position of Deputy Director of FSUE Voskhod Research Institute for the development and maintenance of the state automated system (SAS) Vybory. That is, he knows perfectly well both the features of the system and the people who are engaged in it.

Obviously, that's why JSC Palmintech, controlled by him, executes orders for work with the SAS Vybory. At the same time, he has been doing this since 2011, when Kabanov himself still worked at the FSUE Voskhod Research Institute. In total, Palmintech has contracts from the CEC structure for 264.7 million rubles, the last one was concluded in June of this year.

Around the same date, the contract from the FCI under the CEC of Russia for the provision of services for the organization and maintenance of the storage of SAS Vybory property in a warehouse in Moscow (Moscow region) was received by Teleprom Company. Apparently, the office really wanted to get this contract, because, according to the reader who contacted the editorial office, it reduced the initial price of the contract by more than 80% - from 8.5 million rubles to 1.4 million.

Under the terms of the agreement, it must ensure the storage of about 17 thousand units of the Ballot Processing Complex (BPC) in a heated room with an area of at least 1685 square metres, which would be a maximum of two hours' drive from the Central Election Commission at the metro station Kitay-Gorod in the capital. At the same time, the market value of renting a room that would meet all the conditions is about 5 thousand rubles per square metre. That is, about 8.4 million for rent alone! So, it turns out that the Teleprom company "grabbed" a bad contract?

May the contract be beneficial to the company in a completely different way? After all, the BPC includes technical "stuffing" for voting: computers, monitors, sound recording devices, servers and modems, including electronic access keys - that is, a database on electronic media. In the contract, the covered area is described as "complexes of automation tools for election commissions of the subjects of the Russian Federation and territorial election commissions located in the territories of the Bryansk, Kaluga, Ryazan, Smolensk, Tula and Yaroslavl regions". It turns out that the Teleprom company now has data on Vybory of citizens of the Russian Federation?

Teleprom Company is associated with Dmitry Burya, who works as an adviser in JSC Concern Avtomatika. Thus, probably, Vladimir Kabanov helped his colleague "build bridges" with the CEC, didn’t he?

Meanwhile, rumour has it that Burya is connected with businessmen Georg Witte and Lyudmila Savina, who "shone" in scandals with purchases for MIA. Now these people have moved to the CEC, while one of them has settled in the Chemezov’s structure?

According to judicial and normative acts of Russian Federation, Energopromresurs-M, where Savina works as the CEO, and AKB, close to the businesswoman, were charged with collusion at state auction on 29 December 2018 for the supply of communications equipment to the needs of the Ministry of Internal Affairs of the Russian Federation and Main Center for Communications and Information Security. The damage caused to the budget was then estimated at 170 million rubles. But the criminal case did not follow — was it all because the entrepreneurs acted in the interests of the head of the department Vladimir Kolokoltsev?

And, it seems, "lured" firms for many years "mastered" the budgets of the Ministry of Internal Affairs. It all started with the arrival in the Main Centre of Communication and Information Protection of the Ministry of Internal Affairs of the same Dmitry Burya in 2011 - as spiteful critics say, he immediately began to collect "tribute" from suppliers. Sometimes, according to rumours, the "kickback" reached as much as 50% of the amount of the state contract!

And all was well with Burya, until he allegedly had a fight with one of his colleagues, who did not like that the companies associated with him were suspended from trading. Next - inspection, detection of failure, dismissal. According to rumours, during Burya’s work, damage was caused in 22 million rubles at the acceptance of used products from Leasingpostavka LLC. However, the criminal case concerning this fact did not follow again. But why?

Moreover, according to the authors of the Pravo.ru portal, allegedly Burya even tried to challenge his dismissal in court! At the same time, the case allegedly concerned Basis TeleCom LLC: in the order it was written that he signed acts of acceptance of services in the actual absence of work, because of which the Ministry of Internal Affairs received damage of 6 million rubles. How did he manage to avoid a more severe punishment than disciplinary action and subsequent dismissal? According to his lawyers, his subordinate, who took his place after his dismissal, Andrey Krupka, was supposed to monitor the implementation of contracts.

It seems that Mr. Burya can do anything. According to the authors of the Pravo.ru portal, allegedly in August 2012, he hit two people, who were riding a scooter. And even this did not become a reason for initiating a criminal case…

Rumoгr has it that even after Burya left the law enforcement agency, he kept in touch with Kolokoltsev - they say they were seen at joint events, they took photos for memory. Is it really the head of the Ministry of Internal Affairs who settled him as an adviser to Ruslan Suleymanov in JSC Concern Avtomatika? Suleymanov, by the way, also "shone" in scandals with purchases. It is worth noting that collectors of "tribute" for the leadership often sit at the post of advisers.

May it be due to fact that the Concern Avtomatika employs a native of the law enforcement agencies, the company has contracts with the Ministry of Internal Affairs? At the same time, these contracts also raise questions. 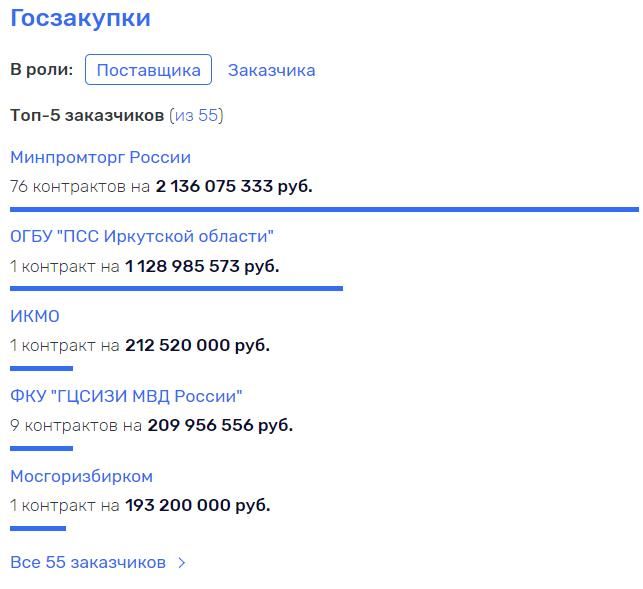 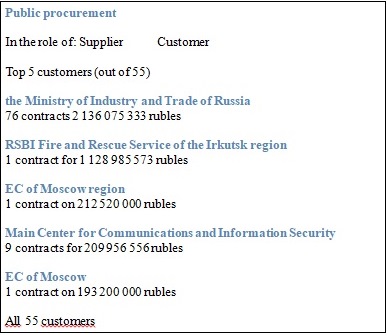 According to the website of public procurement, the previously mentioned Teleprom company in 2019 without competition on the bid entered into two contracts in the amount of 72 million rubles to supply Nokia (Alcatel) equipment  for FSO Special machinery and Communication.

Apparently, an anti-competitive agreement was concluded between the Avtomatika Concern and the Teleprom Company, wasn’t it? Moreover, the money from the Concern Avtomatika could probably be withdrawn by purchasing Nokia goods at an inflated price through the Teleprom company or other legal entity.

Does it mean that after Burya, companies that previously "showed up" on contracts with the Ministry of Internal Affairs also came to Rostec? Moreover, does it turn out that among the beneficiaries of firms that provided services for the Russian law enforcement agency could be a foreigner Witte? Don't you find anything strange?

According to a reader who wrote to The Moscow Post, the Ministry of Internal Affairs allegedly reacted in a very peculiar way to reports of possible corruption in firms probably associated with Witte. They say that he was simply interviewed, and the German businessman replied that he did not know at all where was the money from the companies that he owned, and who were all these people who manage this money so wonderfully.

It was rumoured that Witte also had his own "laundromat". We are talking about CB Novopokrovsky LLC of Vladimir Knaus - also a citizen of Germany. Witte was the deputy banker and controlled his finances.

As indicated on the official website of the Central Bank, in 2017, the credit institution's license was revoked. At the same time, the Central Bank missed 7 billion rubles of depositors of the organization. Didn’t it "leak" to Germany?

Before the complete "collapse", Novopokrovsky constantly appeared on the list of the Central Bank, which suspected the institution of hiding "bad" assets. The regulator even imposed restrictions on accepting deposits. The reason for the revocation of the bank's license was its numerous violations of the requirements of the Federal Law "On Countering the Legalization (Laundering) of Proceeds from Crime and the Financing of Terrorism".

According to the Central Bank, the business model of the credit institution was focused on aggressive attraction of funds of the population, which were placed in assets of unsatisfactory quality. So is it what Knaus and Witte were doing?

But their activities have already attracted the attention of supervisory authorities. In 2017, according to the  ConsultantPlus database, antimonopoly officers conducted an unscheduled inspection of Knaus’ StroyEngineeringGroup.  And, what a coincidence, at the same time they came with inspection to the already familiar Energopromresurs-M LLC and AKB LLC. This may indicate that all the companies are connected to each other. And so, with Mrs. Savina, and with Burya through her.

It turns out that entrepreneurs who supposedly could be "fed" for a long time in the Ministry of Internal Affairs, now decided to take up the CEC? Though in this case, we can talk not about the banal "mastering" of funds, but about the fact that the personal data of Russians from several central regions fell into the hands of German citizens. In this case, Iit is curious why foreigners need this information? It's scary to imagine how they can use it…