Forbes does not appear on the lists, Trump is "resting" with the owners of the SNA holding Smetannikov and Sobolev

SNS-Holding with Pavel Lyubov will go for the "truth" to the ex-president of the United States?

The Moscow Post defended its reputation in the case of Donald Trump, a lawyer from Cyprus and cigarettes from SNS-Holding.

The day before, the next and, we hope, the last meeting took place on the lawsuit filed by the tobacco company SNS-Hodling against The Moscow Post.

Recall that the plaintiff is "offended" by the fact that we allegedly marred his reputation with our assumption that the SNS company may be associated with former American President Donald Trump and a lawyer with an ambiguous biography of Pampina Votsi. All this The Moscow Post described in detail in the investigation of "Press" on Pampina you will get the result: Trump loomed behind the co-owners of tobacco assets of the SNA. "

At the first meeting, the plaintiff's representative appeared with a pile of papers, and, reading from them, began to tell the judge that the article allegedly contained such phrases as: "Former American President Donald Trump is related to SNA-Holding, has influence on the owners" or "Mikhail Smetannikov and Andrei Sobolev (owners of SNA-Holding according to YEGYURL - editor's note) are involved in the use of such funds in business as nominal persons and one-day firms to withdraw money."

And there were about a dozen such phrases. At the same time, when our lawyer Albina Yusupova asked to show such quotes in the text, the representative of the plaintiff, Mr. Pavel Lyubov, could not do this. Not wise, because nothing of the kind was written in the material.

After the trial, probably realizing after the meeting that the claims put forward by him were no good, the representative of the plaintiff clarified his requirements for publication. But he asked for video conferencing. This time, the plaintiff decided not to appear in person - laughed at what he said last time?

In the new claims, the plaintiffs (or representative Lobov acting in their interests) surpassed themselves. At first, they asked the court to recognize the information that they themselves invented as untrue. At least this was not written in the article.

The second requirement is to declare untrue and remove the information contained in the phrases of the article from the article.

It even became somehow uncomfortable. We could not imagine how to remove information from phrases.

Those phrases that even make no sense to justify were indicated. Let's give an example: "there is a feeling, then the money that was" scraped "from all firms into one was simply taken to the same offshore in these two years." For context, we are talking about the fact that several other companies have poured capital into one company that could be related to our plaintiffs. Information about the joining of companies is in the EGYURL.

But, probably, here most of our respected opponents in court were not satisfied with another offshore recall. Then everyone can judge for himself. There is an offshore in the structure. We do not claim anything, just assume. Did the Editors really get to the very point, since those represented by Pavel Lyubov were so alarmed?

"Kazakhs have nothing to do with it, but we will protect them"

Or, for example, this: "Smetannikov is also the general director of the Kazakh company DRAKAR, engaged in the production of computer equipment." And further, the related fragment: "it does not work quite in clean. In 2017, the company was convicted of copyright infringement. It turns out that instead of developing her own documentation, she used someone else's. "

The plaintiffs argue that Smetannikov, who works for SNS, has nothing to do with DRAKAR. Well, we're ready to believe it. But if you get acquainted with the information about the company, we will see there a complete namesake of Mikhail Smetannikov in the leaders. In general, it was about the presence of such data that we wrote.

And then, why, I wonder, does the plaintiff need to challenge the information that goes on - about the violation of DRAKAR copyright? Are you, Mr. Lyubov, whose interests you generally defend?

Trump is not our comrade

In court, Lyubov spoke, among other things, negatively against the former president of America, said that the customers of his services generally do not like Trump, to put it mildly, and, as our lawyers said, calling the ex-president "a criminal element." (Would you take a closer look, Mr. Trump... maybe sue?) What was it for? Who cares how Smetannikov treats Trump? Or is it such a move, in an attempt to prove non-involvement in the interests of the former president in the absence of evidence of any guilt on the part of The Moscow Post?

In general, the impression was that the person simply did not prepare. It is not clear whether he even read the article if he allowed himself to openly say under the judge that we wrote those phrases that are actually not in the material.

At the second meeting, that is, today, the respected Mr. Lyubov simply did not appear, or rather appeared, of course, but not in the physical sense. He was present from presumably his (we do not claim that his own, Mr. Lyubov, do not nightmare with the court!) Kitchen. A young man in a white T-shirt may feel more confident that way, or just shy away from mobilising?

In general, he repeated everything that was at the first meeting.

When the word was handed over to the defendant, Mr. Lyubov behaved as unethically as possible - constantly meeting what the lawyers of The Moscow Post said and exclaiming "it is obvious that this article defames business reputation!" Apparently, it was obvious only to Pavel Lyubov, the director of the company's department from the Forbes list (or he himself from the Forbes list, we did not understand the wording), as he himself introduced himself, derogatory referring to our publication in a complaint (full text below in the picture). 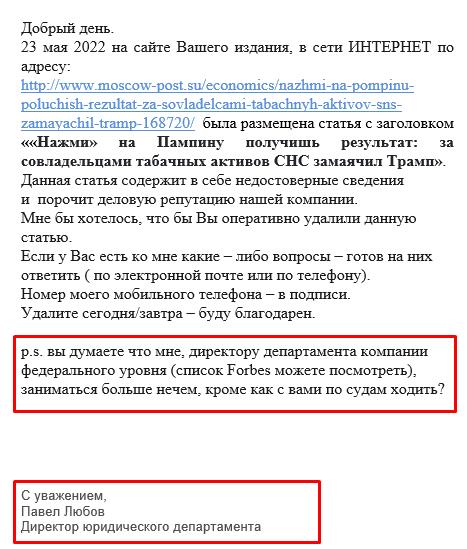 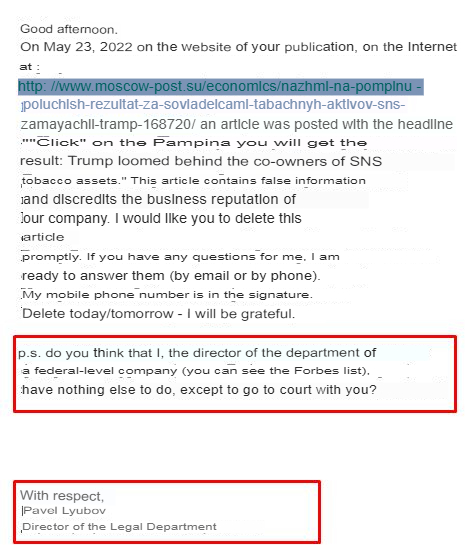 No respect, which is written below, does not smell here. According to lawyer Alexander Changli, this attack in our direction was as inappropriate as possible. Nevertheless, Mr. Lyubov nevertheless went to the courts of the busy and went on his own initiative. Photo: Archive of The Moscow Post

By the way, in addition to the fact that a person who apparently has something to do with Forbes (we never found his last name there), to whom we, apparently, should be extremely sensitive, was not initially completely obvious that it was impossible to manipulate the wording in court, so he also did not bother to check to whom he was filing a lawsuit. In addition to our Editorial Office, a journalist was indicated that he writes this text, or rather, he will write it.

As you can observe at the top of the text, my "stage" name is Madeleine Meron, created just so that people like Lyubov do not distract from work. So, the lawsuit was filed against Madeleine Miron. When asked by the judge why a pseudonym was indicated here at all and no more data about the person to whom the lawsuit was filed, Lyubov answered something like "we are so accepted" than he threw all those present into complete confusion.

Well, and the icing on the cake. The claim was dismissed for all claims in full.

As lawyer Alexander Changli explained, "the plaintiffs have chosen an improper way to protect the right." Translating into the language of ordinary people, in this case, this means that the plaintiffs did not listen to their director of the legal department, Mr. Lyubov, or the director of the department needs to improve his qualifications. We don't know what you are, Mr. Lyubov, the director, but you seem to doubt your legal abilities.

"Plaintiffs have claimed an improper way to protect the right. In cases of protecting business reputation, a person has the right to demand recognition of specific information as defamatory, which is unequivocally stated in Art. 152 of the Civil Code of the Russian Federation. However, the representative of the Plaintiffs either did not read the indicated article, or did not understand its meaning, "commented lawyer Albina Yusupova.

The result is extremely ironic. We wrote an article that in some way can be perceived as PR. They wrote that SNS-Holding may not be associated with some Vasya from the village, but with the former president of America himself! And then we were sued... Or maybe the point is just to inflate the story? Well, in this case, we are waiting for a challenge to the judge's decision, Mr. Lyubov. We will be happy to tell you about your legal abilities again!