Businessman Albert Khudoyan could be "framed" for the land of Aerostar. Who are the "shadow" beneficiaries of the entire scheme, and what does Alexey Fisun and his friends have to do with it?

Businessman Karen Avdalyan bought a 50% stake in Technoservice LLC. The latter owns the territory of the Aerostar Hotel in Moscow.

According to Vedomosti, the share that Avdalyan acquired previously belonged to the AKPUR LTD offshore company associated with Alexei Fisun. Fisun himself appeared as the owner of the company until November 2017. Later, offshore companies NUBIAN TRADING LIMITED and AKPUR LTD became founders instead.

The latter, according to Rusprofile, still owns 50% of the company.

The Moscow Post correspondent understood whose interests are still protected in the deal.

All traces lead to the Khotimsky

Fisun until at least February 2021 (no later data) was a co-owner of Sovcombank, the monetary structure of the Khotimsky brothers, which appeared in a lot of high-profile cases. Including letters have repeatedly come to our Editorial Office, the authors of which claim that Sovcombank fraudulently takes away their only housing. Documented details can be found here.

At one time, Aerostar was owned by businessman Pavel Fuchs. His MosCityGroup bought Awasiti, which owned the land. She planned to build a multifunctional complex on the territory of the hotel and the nearby terminal.

It is known that Fuchs was a shareholder of Sovcombank in the 2010-2015's. So, most likely, despite the repeated change of owners of the territory, Sovcombank's "ears" still stick out behind it. This is also confirmed by the fact that Avdalyan's share in Technoserva is pledged to Sovcombank.

Fuchs: from Moscow to Kolomoisky itself

In Russia, Fuchs is accused of embezzling money from equity holders during the construction of two residential complexes; in Kazakhstan, he is suspected of embezzlement from BTA-Bank.

In August 2020, that Fuchs became a defendant in a criminal case on fraud in the construction of an elite village - "Residence Crystal Istra."

Forbes journalists also write that the Cypriot company BEM Global Corp, which was owned by his brother, in 2015 transferred $1 million to the account of former Moscow Vice Mayor Joseph Ordzhonikidze as a reward for some consultations. Fuchs built two skyscrapers in Moscow City. The initiator and ideologist of the construction was Mr. Ordzhonikidze. It is easy to guess what "consulting services" the official could provide.

Fuchs' connections extend to Ukrainian oligarch Igor Kolomoisky, whose companies owed a couple of decades ago to Fuchs, American President Donald Trump, to whom he planned to build Trump Tower in Moscow and former Minister of Energy, Industry and Trade of Kazakhstan Mukhtar Ablyazov - he owned BTA-Bank.

Now Fuchs, who renounced his Russian citizenship in 2017, most likely lives in Ukraine. Although, in connection with recent events, he could move. In Ukraine, he has a lot of oil and gas assets that he bought from the entourage of former President Viktor Yanukovych and does business with Kolomoisky.

At one time, Fuchs owned Aviaciti, which was the owner of the Aerostar lands. Later, the company was transferred to Albert Khudoyan. In November 2021, he was sentenced to 6 years for fraud with the ground on which the Aviasiti company is building the Prime Park residential complex on Leningradsky Prospekt in Moscow. - wrote Vedomosti.

He was attracted to the claims of former partners - Ildar Samiev and Sergey Govyadin, which acted through foreign companies Visenia and Mansfield Executive Ltd. The trio previously teamed up to work on the Prime Park residential complex. Later, the project began to have financial problems, Aviasiti almost went into bankruptcy, creditors took the project land, and Khudoyan turned out to be involved in the criminal case.

One glory was all the signs of a raider capture. The reputation of Samiev and Govyadin speaks eloquently about the possibility of such an outcome. Govyadin is credited with ties to crime, in addition, he may be involved in the disappearance of $25 million taken from Rostinterbank. And Samiev in general since 2018 - in a pre-trial detention center due to the fact that he sold an apartment to football player Fyodor Smolov, which was pledged.

Several high-ranking security officials were also involved in the Khudoyan case - ex-deputy heads of the SD of the Ministry of Internal Affairs, Major General of Justice Alexander Krakovsky, Alexander Biryukov and former investigator Alexander Bryantsev. Their guilt was not proved, and recently it became known that the Cypriot court decided to liquidate Visenia. What may indicate the imminent collapse of the Khudoyan case.

And, apparently, this may come back not only to Samiev and Govyadin. If you carefully analyze the above data on the ownership structure of Aviasiti, you get the feeling that it was beneficial to "merge" Khudoyan to the current owners of this company. Judge for yourself - a company on the verge of bankruptcy, it has a lot of good land plots that can be obtained with it for nothing. It couldn't seem to attract Mr. Fisun. And what do we see? Previously owned by Aviasiti, the land under Aerostar is now owned by Fisun and Avdalyan.

In addition, several companies were issued for Fisun some time ago, which receive good government contracts (Riga Ice Land LLC, Riga Land Hotel LLC). Now many of the companies previously owned by Fisun have been transferred to the management of a certain Yevgeny Varvarov. Judging by the constancy of the flickering of this surname in the firms-former Fisun, we dare to assume that Varvarov can essentially represent the interests of the entrepreneur. 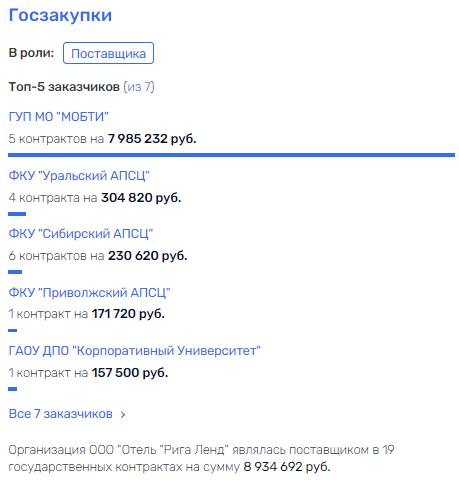 In this case, if the withdrawal of public money took place in these firms, this could potentially be carried out through the offshore, to which Technoserv remained registered. Another point is why it was beneficial to get rid of Khudoyan. Photo: https://www.rusprofile.ru

Covered on all sides

The figure of Avdalyan is also interesting here. He is considered close to the Deputy Prime Minister of the Russian Federation Marat Khusnullin. Connections can be traced through the entrepreneur's business: In 2011, Bet-Consulting (owned by Avdalyan) became the owner of Kapstroy-Development, which until 2015 belonged to Moskapstroy, and then to its daughter Moskapstroy-TN. These are the structures of the Moscow construction complex, bought out at the time when it was led by Marat Khusnullin.

Now "Kapstroy-Development" receives a lot of fat government orders. His Best Consulting is not in poverty either, which regularly wins tenders allocated for the purchase of apartments in Moscow by the Presidential Administration. Also, probably, not without the help of Khusnullin and, possibly, Moscow Mayor Sergei Sobyanin, whose deputy for urban planning is Khusnullin.

Avdalyan also has experience in "mastering" the money of banks for a couple with the owner of the Safmar group Mikhail Gutseriev. The fact is that Avdalyan may be associated with Mikhail Shishkhanov, whose niece owned 33% in Bet-Consulting. Trust Bank filed for bankruptcy against this company, under the encumbrance of which Avdalyan's share in the company is located. A relative of Shishkhanov, Mikhail Gutseriev, also works with the same Trust. According to Forbes estimates, Gutseriev owes the bank more than a trillion rubles.

It turns out that Fisun kept an object for a long time, which was once squeezed out of Khudoyan, who later went to jail. Samiev and Govyadin are no longer interested in anyone here, because the security forces intervened in the matter, and it is expensive to solve problems with them. Mr. Fisun himself has been talking for a long time not in Russia, but money, meanwhile, should work. It is clear that such guys as Karen and Marat will attach property. The discount, of course, will be, but not as ahoy as the "competent" guys.

Now the work for Marat Khusnullin and his protege is the head of the Moscow construction department so that they can successfully enter into the city planning policy of the city.

However, the problems have already been resolved here. One of the participants in the construction is said to be Pavel Cho's Capital Group.