The charisma of Leonid Slutsky helped him take a leading position in the Liberal Democratic Party, but the scandals attributed to him (including with a corruption soul) can play a cruel joke with her.

A little more than a week is left before the extraordinary congress of the Liberal Democratic Party, which is to gather regional delegates of the party in Moscow for the election of its new chairman to replace Vladimir Zhirinovsky, who died in early April. Despite the preservation of the illusion of elections, experts are inclined to believe that the next chairman of the LDPR will be a shocking lover of female charms and Leonid Slutsky, who was approved the day before as the leader of the LDPR faction in the State Duma.

The Moscow Post correspondent tried to look into the future of the party led by Slutsky, taking into account his past "merits."

Slutsky clearly represents the strategic tasks of the Liberal Democratic Party. He confirmed this the day before during the traditional press approach before the plenary session of the State Duma. "There will be no tectonic shifts in the work of the faction, we are a constructive opposition," Slutsky said surrounded by smiling supporters, radiating a special enthusiasm and mood for success with his whole being. Along the way, he assured that the faction would work "forced and effectively." Perhaps for this he has all the starting data.

Ill-wishers in social networks immediately hastened to interpret his words in their own way: it seems that Mr. Slutsky, like the whole party, will take a compromising position. After all, few people believe that Slutsky's movement up the party power was done without the approval of the functionaries of the Presidential Administration. 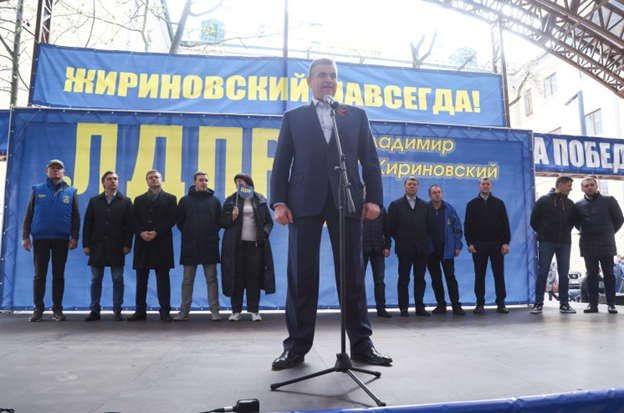 Slutsky makes it clear with all his behavior that he is ready to become the new leader of the Liberal Democratic Party. Photo: iz.ru

At the same time, unlike Vladimir Zhirinovsky, who passed away, Slutsky still has a very peculiar background. In addition to the shocking, actions that have always been the "highlight" of Vladimir Volfovich, Slutsky managed to light up in a number of scandals with an economic bias, which he will remember for a long time.

From adviser Luzhkov to penthouse scandals

The first scandals involving Slutsky can be discovered even before the start of his deputy career. For example, such was the story of the elite garden partnership "Springs" in the Moscow region.

According to the authors of the Vestnik K website, allegedly officials of the Presidential Administration and the Moscow City Hall decided to create it in 1991, and the Slutsky site there turned out to be exactly next to the estates of the family of Vladimir Resin and the wife of Yuri Luzhkov Elena Baturina, as well as the founders of the large holding "Microdin" Dmitry Zelenin and Alexander Efanov.

Slutsky was later associated with the company of the latter, which owned Norilsk Nickel in the 90s. Also, Mikrodin controlled the ZIL automobile plant, several banks, and so on, and in addition was a shareholder of Public Russian Television (now it is Channel One).

From 1997 to 1999, Leonid Slutsky was Deputy Chairman of the Board of Unicombank JSCB. This bank went bankrupt, although it served Gazprom's accounts. It is noteworthy that at that time the future deputy from the Liberal Democratic Party, Ashot Yegiazaryan, worked in the bank together with Slutsky as deputy chairman of the board of directors. Moreover, he called him almost the true head of the bank. In 2010, Yegiazaryan lost his deputy mandate, became a defendant in two criminal cases, fled to the United States and was put on the international wanted list.

For the first time, Leonid Slutsky was elected a State Duma deputy in 2000 and for some time retained the image of an incorruptible people's choice. Or just gradually "got in the taste."

Because in 2010, his assistant Viktor Sokhatsky was detained red-handed in Moscow for a bribe in the amount of $70 thousand. Then Slutsky had to make excuses that he had allegedly dismissed the detainee for a long time. 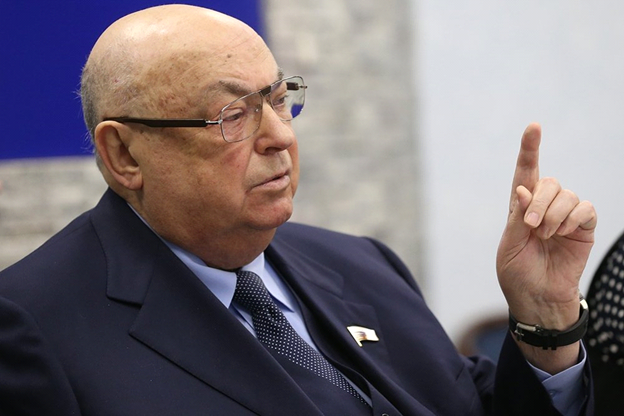 Apparently, Vladimir Resin is the second most important person for Slutsky's career - of course, after Zhirinovsky himself. Photo: rg.ru

In 2017, businessman Sergei Polonsky, accused of fraud in the construction of two elite housing complexes in Moscow, turned to the Russian Prosecutor General with a request to initiate a criminal case against State Duma deputies Vladimir Resin and Leonid Slutsky, who allegedly received gorgeous apartments from him as a bribe in a residential complex, which he himself built. Polonsky claimed that in exchange for apartments, Resin and Slutsky guaranteed a solution to the problems associated with his business.

In addition, the media reported that Slutsky's wife, Lilia Dmitrievna Lyskova (or her full namesake), has a penthouse worth 400 million rubles, which is located in the Moscow residential complex Kutuzovskaya Riviera, again built by Polonsky.

Even if Polonsky was not sincere in everything then, the connection between Slutsky and Resin indicated by him did not give rest to journalists for a long time. The fact is that earlier, from June 1992 to December 1993, Slutsky, being a 24-year-old guy, worked as an adviser to Moscow Mayor Yuri Luzhkov. It is doubtful that he could then give valuable advice to such a materian politician as Luzhkov.

It was more like the fact that the young Slutsky was attached to a "warm place," and it was the then vice-mayor of Moscow Vladimir Resin who could do this. It is unlikely that their relationship with Slutsky was interrupted after such a successful start. There was a time when Slutsky was even called the "illegitimate son of Resin" by the eyes, whom the young politician, in turn, often called even "dad." Of course, this turned out to be only rumors.

"That's the kind of Kissinger"

The scandals that accompanied Slutsky in the last 5-10 years, the matured parliamentarian invariably called "the order and machinations of his enemies."

The loudest thing thundered was the charge of harassment, which Slutsky was presented with in 2018 by three journalists from different publications. Their words were supported unexpectedly by ex-deputy Oksana Pushkina and official representative of the Russian Foreign Ministry Maria Zakharova, which immediately added weight to the claims of women. As a result, on March 8, 2018, Slutsky even had to apologize to the women whom he "caused any experiences" allegedly without malicious intent. 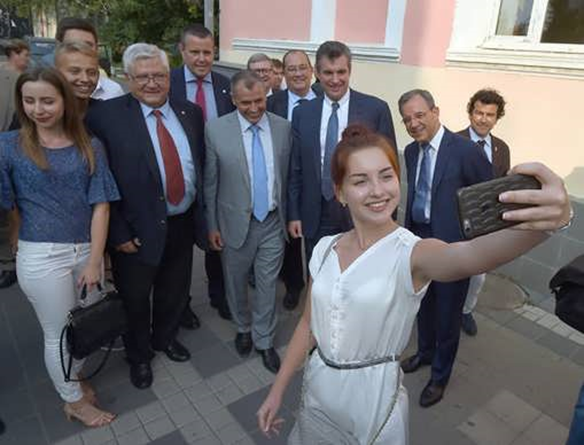 The scandal on the topic of harassment has become almost "Slutsky's hallmark, but he is unlikely to be very worried about this. Photo: rbc.ru

Another information channel, which questioned Slutsky's income declaration, came from a completely unexpected side. According to the authors of the Readovka website (recognized as a foreign agent in Russia), allegedly 11-year-old Lydia Slutskaya published a post on the social network last fall, from which it followed that her father, holding the post of head of the State Duma Committee on International Affairs and denouncing Western spirituality at work, seemed to give his daughter Lydia to study at the prestigious "American School in Switzerland," and the girl herself calls Russia "Rashka" and loves to be photographed with an armful of dollars in her hands.

In general, the posts of the minor Lydia Slutskaya on social networks allowed journalists to conclude that she leads a luxurious life, the sources of payment of which remained in great question. All this only whipped up rumors that Slutsky allegedly could have business assets and housing abroad.

But, apparently, nothing can prevent Slutsky on his way to political Olympus. Even to the limited top of the Liberal Democratic Party.

Information about his daughter appeared on social networks and the media on September 3, 2021, and at the end of the month Vladimir Zhirinovsky, during a meeting with the President, expressed confidence that Leonid Slutsky would again head the State Duma Committee on International Affairs, and also compared the politician with ex-US Secretary of State Henry Kissinger and expressed a lot of compliments to his "protege." 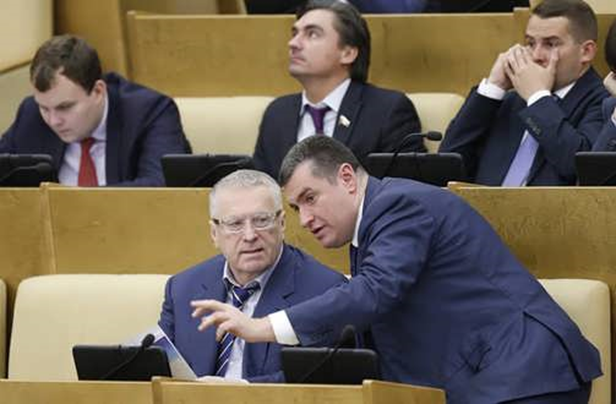 Zhirinovsky greatly appreciated Slutsky and even compared him with Kissinger. Photo: rg.ru

The other day, at the ceremony of 40-day commemorations according to Zhirinovsky, Slutsky, said that "the LDPR is the best party existing in modern Russia. It will remain, will grow stronger, will play a key role in today's difficult conditions, "thereby making it clear once again that it is determined to continue Zhirinovsky's case decisively.

In one, experts agree - charisma and the "lust" of Leonid Slutsky can play both a big "plus" and a fat "minus" of the entire structure. But Zhirinovsky also had bright (and scandalous) charisma, you say? That's right. Only Leonid Slutsky is not Vladimir Volfovich at all...