"Explosive" growth of the UMMC

Residents of the Sverdlovsk village of Baranchinsky for almost a year have not been able to achieve a halt in the production of the UMMC, where explosive work is carried out, which led to the appearance of cracks in houses and greenhouses.

Residents of the village of Baranchinsky turned to the editorial office of The Moscow Post in the Sverdlovsk Region, next to which the UMMC is in full swing developing the Volkovsky deposit of vanadium-iron-copper ores. The enterprise can not only cause irreparable damage to the environment, but also endanger people's lives by its actions - explosions led to the appearance of cracks in houses and greenhouses. Despite numerous complaints to various authorities, the enterprise of Iskander Makhmudov and Andrei Kozitsyn has already begun to work out the third stage.

The village of Baranchinsky is located in the Kushvinsky district of the Sverdlovsk region, surrounded by pure fields, mountains and rivers, many plants listed in the Red Book grow there. True, soon all this may disappear: the Svyatogor company, which is part of the Ural Mining and Metallurgical Company, has been working in the region for several years, poisoning everything around it. In October last year, local residents suddenly found that deforestation was actively going on nearby. This was carried out on the eve of the third stage of the Volkovsky deposit of copper-iron-vanadium ores.

The year before, Svyatogor asked the Russian government to hold an auction on the site of the Volkovsky deposit of vanadium-iron-copper ores, which is the largest in the Urals. After the auction, a contractor was quickly chosen to perform mining and capital work - it became St. Petersburg Mostodorstroy 82. It conducts the same explosive work in a consortium with Uralmashzavod.

However, the local residents themselves forgot to ask whether they agreed to live under the side of such explosive production. According to readers of The Moscow Post, they were surprised to find documentation according to which the sanitary protection zone allocated by the UMMC was only... 197 meters! It was such a short distance, according to the plan, that separated the enterprise from the fence of the NTMK garden partnership, where 600 plots are located. 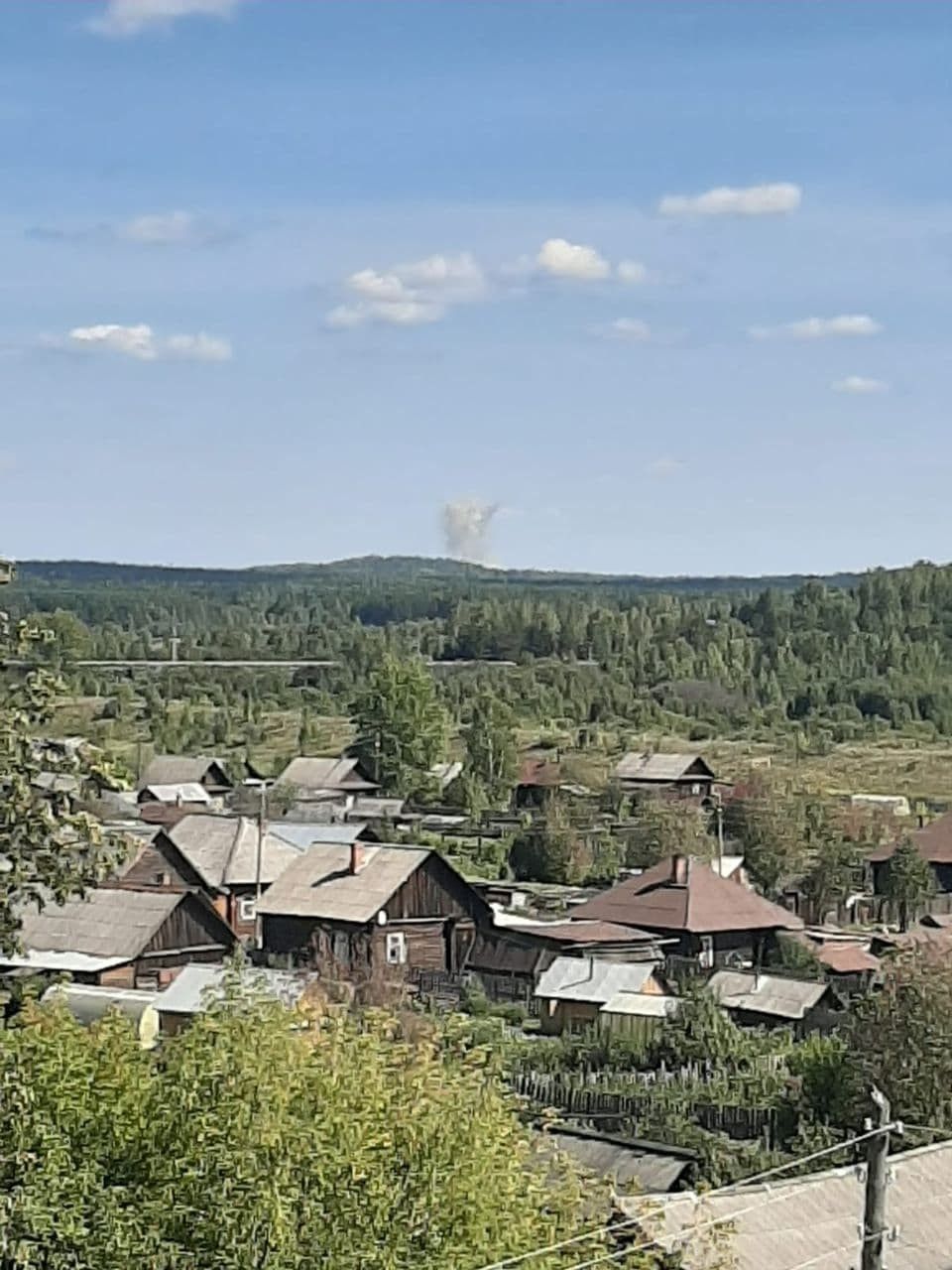 Later, at a public hearing, the UMMC agreed to increase this distance to a kilometer, but the residents stood on their own - they did not want to see any production. Gardeners, whose cottages are near Baranchinsky, even recorded a video message to President Vladimir Putin asking him to stop the development of the quarry. Subsequent hearings held in December 2020 took place with a scandal and the UMMC promised to reconsider the project once again, conducting an environmental examination.

Meanwhile, residents held their own: experts concluded that the project does not meet the requirements of the environmental legislation of the Russian Federation, has significant shortcomings in environmental, technical and social issues, does not ensure the environmental safety of the proposed activity, and, therefore, cannot be implemented. 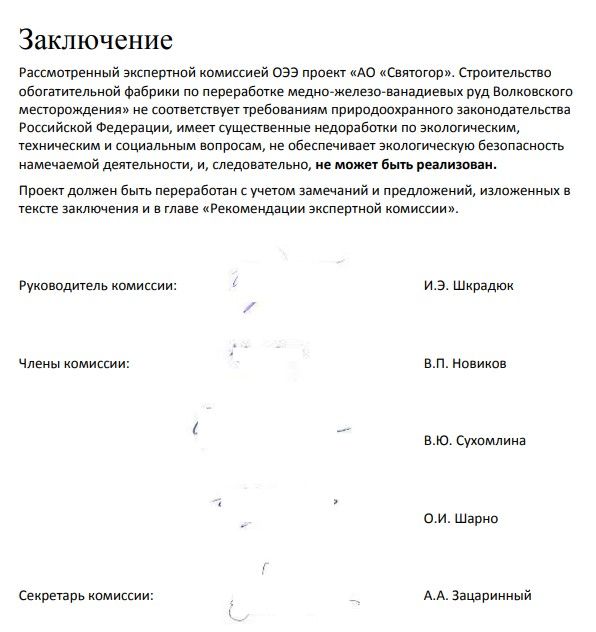 But the UMMC does not stop this and the explosive work continues, the Borovka River is polluted, the forest disappears. Moreover, according to our sources, the plant allegedly cleans up all information about this situation, and local media ignore numerous letters from residents.

All this seems to be very even in the style of the UMMC. For example, the plant has been ignoring worried residents of the north of the Sverdlovsk region for many years - social activists and environmentalists report water poisoning during the development of the Tarnier, Shemursky and Novo-Shemursky deposits. Copper mining in these places led to the fact that fish disappeared in the rivers, and green water flows from the inhabitants of Ivdel and Severouralsk from the cranes. Earlier, The Moscow Post wrote in detail about this.

In 2017, an administrative case was already opened in the Sverdlovsk region against the Svyatogor plant. The organization was accused of violating environmental legislation, it was about water pollution in the city of Ivdel. However, as reported by Nakanune.ru, this did not prevent then the general director of "Svyatogor" Dmitry Tropnikov received an award from the hands of the head of the region Yevgeny Kuyvashev for his contribution to strengthening the well-being of the region. This is the contribution!

But back in 2012, Svyatogor was fined by the prosecutor's office for violating environmental legislation. In 2018, another UMMC structure, the Revdinsky Zavod, was fined for similar violations, Rosbalt reported. Already in 2019, the fine was received by Shemur CJSC (also the structure of the UMMC), which owned licenses for the development of Shemursky and Novo-Shemursky deposits of copper and copper-zinc ores, wrote Politsovet.

However, these situations seem to have not taught the UMMC anything. To recall at least history, how in 2018 a fire broke out in the Republic of North Ossetia-Alania at the Electrozinc plant controlled by the UMMC. As a result, residents had to be evacuated, a series of unauthorized protests swept through the region, and the then mayor of Vladikavkaz, Maharbek Khadartsev, demanded that the plant be closed.

But the UMMC is nothing: enterprises continue to work, and the "happy" residents of those places continue to complain about the monstrous black heavens and coal exhaust, which destroy nature and health.

And then we recall the tragic death of the former adviser to the general director of the UMMC Alexei Ryabtsev, which Kommersant reported last October. There is an opinion that he could know something about the economic activities of the UMMC, and on one day he could make this information public.

The strange activity of the head of the Sverdlovsk region Yevgeny Kuyvashev cannot but pay attention to himself. Earlier, The Moscow Post already wrote that the politician had an excellent relationship with both Makhmudov and Kozitsyn. This is confirmed by the story when Kozitsyn received state lands in the region, and then resold them back for 200 million rubles.

What to say, if this is true, would explain why the complaints of hundreds of residents of Baranchinsky are stubbornly ignored, as well as the results of their environmental assessments. The UMMC seems to have tightly embedded not only in local lands, but also in local authorities.

22 April, 7:45
Gold rush: UMMC will "bite" Petropavlovsk, but Strukov is still in the black?
See also