Acquaintances of the son of the Krasnoyarsk governor Uss Timofey Telegin and Sergei Tulyakov, accused in the United States of money laundering, could have fallen for ordinary fraud carried out under the very "nose" of Sergei Chemezov and Denis Manturov.

News thundered throughout Russia: the US Prosecutor's Office accused the son of the Governor of the Krasnoyarsk Territory Alexander Uss and several other citizens of violating the sanctions regime and money laundering. But not Artyom Uss is interesting here.

Timofey Telegin and Sergey Tulyakov are also involved in the case. The Moscow Post wrote about the first in connection with the scam when creating a toy train for 16 million rubles. The second - headed the subsidiary structure of Rostec. How these faces and events are connected - in the material of the correspondent of The Moscow Post.

Timofey Telegin is the owner and head of the Abtronics company, which this year appeared in the scandal with her subsidy from the Ministry of Industry and Trade to create a children's designer called the "large-scale model of rolling stock" Train "Russia."

According to media reports, Telegin agreed with the deputy director of the department for the development of industry of socially significant goods of the ministry, Lilia Nurgatina, that the Ministry of Industry and Trade would take at face value the alleged development and issue a subsidy. In fact, the model presented to the ministry turned out to be produced by a completely different company back in 2015, and the cost of one of these was at the level of 15 thousand rubles.

In this case, Telegin, together with Nurgatina, are accused in Russia.

"Troubles" with the Americans have been going on since 2016, even before the story with the train model, when a certain "near-scam" with microcircuits was revealed. The bottom line is that Telegin, through the same Abtronics, entered into contracts with Roscosmos for the supply of microcircuits, which he most likely purchased in America through his people.

At least in the notorious 2016, two at that time top managers of Telegin's company were detained in the United States by FBI officers who found out that they had come to take out microcircuits from America without the necessary license. The trouble is that the parts were beushny, and were purchased in ordinary stores.

As a result, Telegin tried to distance himself from this story and even fired his fallen employees retroactively.

After they returned to the Russian Federation and told how everything was, Telegin even went to court in order to recognize this information as defaming honor and dignity, but naturally lost.

Roscosmos in an American way

By the way, from that moment, Abtronics did not stop concluding contracts, including for the supply of microcircuits. The latter dates back to 2020 - almost 5 million rubles of the company were given for them by NPK SPP, owned by the United Rocket and Space Corporation (ORKK). In total, the company earned 121 million rubles on public procurement.

In addition to NPK SPP, the company's microcircuits were ordered by the Ministry of Industry and Trade FSUE NPP Gamma - just in 2016, long before the situation with the children's designer; Rostov FSUE NTC Atlas (in 2017) and IPF RAS.

In total, Abtronics received 17 million rubles from one NPK only for the supply of microcircuits. Photo: https://zakupki.kontur.ru

Moreover, according to the documentation, the customer and the contractor agreed that the components would be imported - American, Filipino Malaysian. 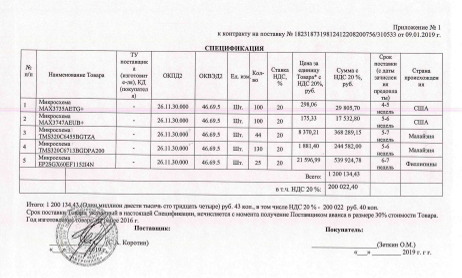 Extract from the contract for the supply of microcircuits from Abtronics to NPK SPP. Photo: https://zakupki.kontur.ru/31907436970

Sometimes the fact that the components are imported was even indicated in the name of the purchase.

Further, these microcircuits, according to the terms of the contract, were supplied to fulfill the state defense order. And most likely they went to the technical support of the orbital station, in other words - the ISS.

It turns out that the American special services caught ordinary fraudsters, which are usually engaged in an ordinary sergeant from the "neighborhood."

In fact, it is much more interesting than Abtronix did in Russia. As previously reported by The Moscow Post, the main customer of the office is JSC "CCBA" - a control enterprise for the production of radar, radio navigation equipment and radio remote control equipment.

The company transferred more than 52 million rubles to Abtronics, of which more than 40 million were for the supply of machines. These contracts date back to 2018 and, despite the burnt deadlines, are still under execution. Where the funds went is the question.

Chemezov here, how is Manturov with him?

We have already mentioned another person involved in today's case - Sergei Tulyakov. He is the sales director of Rostec's Network Technologies structure. Information about this is published on the website of the US judicial system. In 2011, this company was created from the capital of FSUE VO Radioexport, and now it is in the process of bankruptcy.

Network Technologies was previously called FSUE VO Radioexport, which, like Abtronics, collaborated with ORKK. According to the terms of the contracts, the components were also American-made. 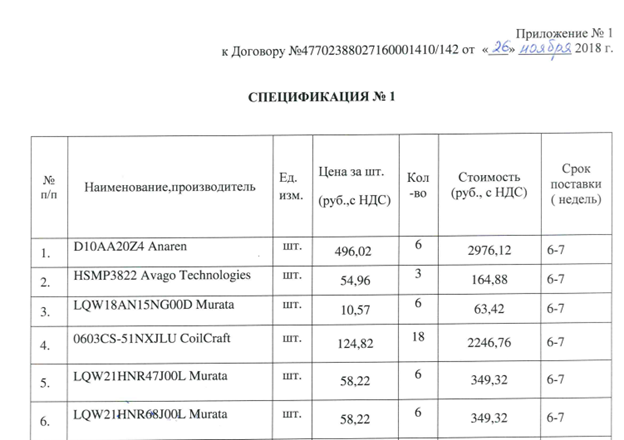 Excerpt from the ORKK contract with Radioautomatics. Models of electronic devices - produced by different countries. Including the United States. Photo: https://zakupki.kontur.ru/31807201066 (Contour Snacks)

Tulyakov also headed JSC Vetroogk, which was related to the Rosatomovsky Atomenergoprom. Recently, he heads the FSUE TsNRPM of the Ministry of Culture of the Russian Federation.

March to July 2020 Tulyakov headed Radioautomatika LLC, which by type of activity performed the same functions as FSUE VO Radioexport, which later became known as Network Technologies JSC and had similar government orders. Thus, it can be assumed that some contracts intended for Network Technologies JSC were carried out by Radioautomatika LLC, and the money could go into the pockets of officials.

In general, the contracts of the structures of the Ministry of Industry and Trade and Rostec with Abtronics and Radioautomatics clearly demonstrate the long-standing cooperation between them and Telegin.

It turns out that the subordinates of Sergei Chemezov and Denis Manturov once again fell into a semi-criminal story? It is also difficult to believe that Ms. Nurgatina was running possible scams in which she is suspected of being with Telegin alone.

Most likely, both the children's designer and the microcircuits are everything agreed with the highest officials: the heads of the defense state corporation and the Ministry of Industry. Moreover, Chemezov has long been unsuccessfully trying to establish the production of high-tech microcircuits in Russia, so it should be, as they say, in the topic.

The role of Roscosmos, whose "orbit" includes the ORKK, which "eats" American microcircuits, may not be smaller. According to rumors, components from America could be purchased by Telegin managers at a strong discount, due to the fact that they were previously in use.

Of course, the receiving party should check all this and not allow it for use. But ORKK and other Roscosmos enterprises did not raise the hype. This is how state secrets go to the left, and not by the hands of spies, but by ordinary scammers.