Drozdenko will get Traber instead of salmon?

Alexander Drozdenko in the interests of the "authoritative" Ilya Traber and his own family destroys the last river in Russia, where wild salmon spawn?

A resident of the Shipyard district of Ust-Luga, who literally under the windows is now deploying a full-fledged industrial zone that will interfere with both the calm life of ordinary citizens and ecology, turned to the editorial office of The Moscow Post. The Ust-Luga PTC company plans to build all this, in which the wife of the governor's cousin Alexander Drozdenko has a stake, and previously his own wife was engaged in the company. Isn't that why this family business in the region can do everything? Moreover, the "authoritative" businessman Ilya Traber, in whose interests Irina Drozdenko at one time could realize her share, may have an attitude to the company.

In mid-May, public hearings were held in the village of Ust-Luga on the issue of amending the General Plan of the municipality. And these changes open unprecedented horizons for Ust-Luga PTC. As the reader of The Moscow Post notes, for everyone living in the Shipyard quarter, this means organizing a full-fledged industrial zone in the immediate vicinity of residential buildings.

So, it is planned to build two branches of a non-usable railway and a private highway, and with such a cargo turnover, their life will turn into life at a goods station. For the construction of one railway line and a highway, a small forest (forest fund land) was given. Obviously, in this case, the forest will be completely destroyed, since it has a very small width. The second branch will go along the banks of the Luga River. But the Luga River is the last river in Russia (and according to some reports, even the whole world!), Where wild salmon spawn.

All these changes will be beneficial for Ust-Luga PTK LLC, but only residents of Ust-Luga will be in an industrial ghetto, surrounded by railway and factory enterprises. According to our reader, such changes would not have been made and approved if influential people were not behind them. In favor of this is the fact that they do not consider it necessary to communicate with residents at all, to look for compromise solutions. It seems that unbearable living conditions are created for them, forcing them to move to another place.

Moreover, huge plants for processing ethane-containing gas are already being built in Ust-Luga, there is a huge port. At one time, local residents were promised to build a city, kindergartens, a hospital, etc. In fact, it turned out that it was much more profitable to transport workers from Kingisepp or employees working by shift method. Indeed, in this case, business does not need to invest in the construction of treatment facilities, water pipelines, roads and social facilities. At the moment, sewage treatment plants built in distant Soviet times are being used, which cannot cope with the current volume of sewage. And all this falls into the Meadow - a river from which they take water for drinking.

At the same time, the governor of the Leningrad region, Alexander Drozdenko, looks at this situation through his fingers. But it is very doubtful that it is possible for an ordinary village business to create conditions for the implementation of such a large-scale plan with the construction of roads and other things. All because the family of the head of the region gathered directly to build all this goodness.

According to Rusprofail, Zhanna Geshele, the wife of Drozdenko's cousin Viktor Geshele, owns the largest share in Ust-Luga PTK. The latter, by the way, for many years was the head of the administration of Kingisepp district - the same one where the unfortunate village of Ust-Luga is located. 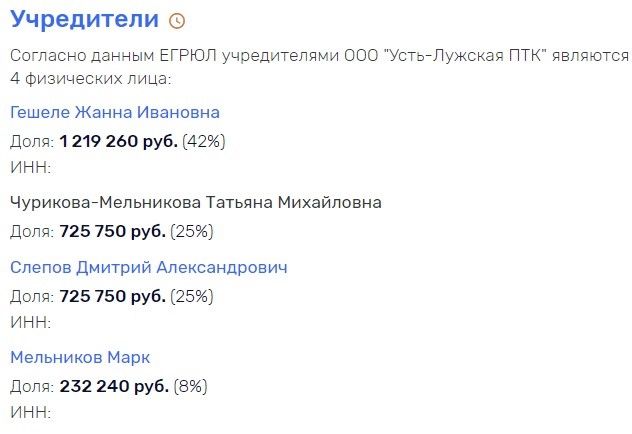 Until April 2016, Irina Drozdenko, the wife of the head of the region, owned a stake in the company. later she transferred her share to Dmitry Slepov, the "strings" from which lead to businessman Ilya Traber in certain circles, known under the nickname "Antiquar," as well as the glory of the "night governor" in the Leningrad region.

The fact is that Dmitry Slepov was a co-owner of SK Stroygarant LLC, which owned a 100% stake in Energomost LLC. Until 2012, the shares in this company were owned by EFESK Group of Companies, whose founders included the son of the former governor of the Leningrad Region Valery Serdyukov - Vadim.

The connection of the latter and Slepov is also traced through LOESK JSC. Slepov was listed as one of the owners of the enterprise, and through ROSTOCK LLC, the office was owned by Serdyukov Jr. Then Slepov sold his share to the son of the ex-head of the regions for 350 million rubles, wrote 47news.

Serdyukov sold everything to the co-owners of the Primorsky CPC Ilya Traber and Ramis Deberdeev. It was said that Serdyukov Jr. could systematically consolidate shares in his hands, so that then he could transfer it to Traber and Deberdeev. That is, he can be their kind of "agent." So Slepov, too? Earlier this was told in detail by The Moscow Post.

But Mr. Traber can really be very interested in the Ust-Luga PTC. To begin with, he actually already worked in the port of Ust-Luga: there, the South-2 terminal controlled by him carries out cargo transshipment. And a real detective story is connected with this. The fact is that the ex-chairman of the board of directors at Ust-Luga JSC Valery Izrailit in 2016 was imprisoned, being accused of embezzling and taking more than 300 million rubles abroad, Kommersant wrote. The spiteful saw this as nothing more than Traber's attempt to "eliminate" a competitor in order to gain control of the port.

And, it seems, he did it, because Israel was eventually removed from the post of chairman of the board of directors and left the pre-trial detention center, where he spent more than three years.

And this whole story with Israel is very associated with the public image of Traber. He was suspected of having connections with the Tambov organized crime group. According to Medusa (recognized as a foreign agent in the Russian Federation), his name appeared in the case of the "Russian mafia," which was investigated by Spanish law enforcement officers. The latter were even put on the wanted list.

According to Novaya Gazeta, Traber and law enforcement officers of the Principality of Monaco know. According to them, he was associated with several companies engaged in resale of oil and money laundering. Among other things, it was about the company Sotrama, the beneficiary of which was Dmitry Skigin, who died in 2003.

But Mr. Drozdenko, who has been leading the Leningrad region for 8 years, does not seem to embarrass anything. Obviously, he worked well with Traber, who long before his arrival in the region managed to turn around great there. And, as we see, it seems to be unfolding so far.