Does "Miratorg" protect the honor of its offshore companies from Putin?

Miratorg has no complaints towards the President. Undesirable media, journalists and some parliamentary parties fall under the "crusher" of the Linnik brothers.

President of  Miratorg Agribusiness Holding  Viktor Linnik and his brother, Chairman of the Board of Directors of the Holding Aleksandr Linnik, continue to prove in court that The Moscow Post "defamed" their business reputation and published false information in its materials. For example, it told the world about an open secret, that money can be withdrawn through offshore companies. The following round of confrontation between business and independent journalists took place in the Arbitration Court of Saint Petersburg and the Leningrad region.

The boundary between defamatory and undesirable information for Miratorg was investigated by the correspondent of  The Moscow Post.

Legal battles have been going on for months. The Linnik brothers set up a whole list of requirements for the publication. Namely: removal of undesirable articles, rebuttal, and, of course, money - 500 thousand for each brother to compensate moral damage.

Particularly, the businessmen did not like the article "Bargaining from the world…", which reported that Miratorg’s pig farm may appear in the area where the battle of Kursk took place. However, they did not deny the fact of construction in the company — the Linnik brothers clung to much less evident facts which were published in the article. They clung so strongly that they decided to call an army of lawyers and linguists to help them.

On June 3, a regular session of the Arbitration Court was held in St. Petersburg, where it was being clarified whether the latter ones were generally necessary.

Miratorg's lawyer Mikhail Emelyanov said that the Holding company was requesting the appointment of a forensic linguistic examination. Judge Polina Raguzina, who was hearing the case, tried to understand how rational this was when, in fact, a couple of quotes were the subject of the dispute.

As The Moscow Post's side stated, the court could almost certainly evaluate them without assigning an expert examination, since in this case only proficiency in Russian is required. But the Linnik brothers' defenders were adamant. Allegedly, defamatory information could be stated not directly, but periphrastically, in the form of hints.

As an example, the judge cited the disputed quote from the article: "Doesn't this indicate that money can be withdrawn from the company?" And asked how the claimants would interpret that saying from a linguistic point of view.

But Emelyanov ignored this question. Apparently, the company's lawyers are aware that there is no need to go to an expert linguist, it is clear: the question sentence is not a statement, and therefore the hysteria about the defamed reputation is far-fetched…

The lawyer hurried to give another example. Miratorg's representatives were most concerned about the "offshore issue".

No complaints towards Putin

Miratorg Agribusiness Holding is fully managed by Cypriot companies, as stated in the disputed article by The Moscow Post. The author puts the question in it: why, despite Russian President Vladimir Putin's demands for deoffshorization, are the company's beneficiaries hiding in Cyprus? 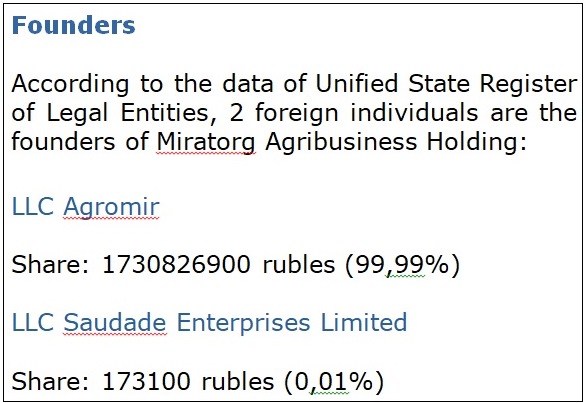 Representatives of Miratorg were outraged by the author's further remark: "Offshore companies allow not only to hide their partners, but also to withdraw money from Russia." It would  seem, who could doubt this? But Miratorg found the phrase defamatory. What is the reason?

"In this case, it is, in principle, all about offshores as an economic tool that allows to hide the final beneficiaries, withdraw money, make transfers from Russian structures to foreign ones," says Aleksandr Changli, The Moscow Post's lawyer. - However, Miratorg is trying to represent this phrase as defamatory. Apparently, there really is something to hide. It is difficult to guess the reasons for such a painful display of concern for the reputation of offshore companies...

It is funny that the representative of Miratorg himself indicated in court the statement of the Head of State about the negative nature of offshores. And made a conclusion that the journalists of The Moscow Post describe the activities of the company managed from Cyprus negatively!

When asked by lawyer Changli whether the claimants were going to call the President as a defendant, they said that they had no complaints towards Vladimir Vladimirovich. This, of course, pleases…

Miratorg did not like the statements where it was said that the structures conduct their business using money from state banks. 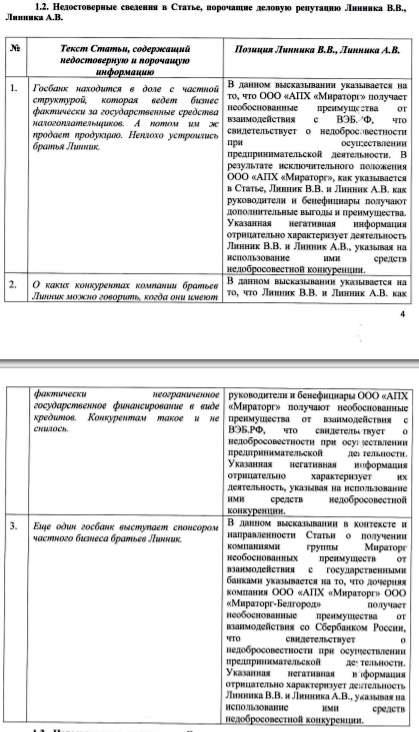 Excerpt from the claimants' arguments

Let's take one example: "The State Bank is in a share with a private structure which conducts business actually for state funds of taxpayers. And then it sells products to them." Where are the lies or attempts to defame the honor? There is not a single word that it is illegal or unethical to take government loans for business activities.

In other words, most of the Linnik brothers' questions are not about the facts, but about the way of submitting information. Actually, the claimants are trying to prove that the author defamed the honor only by taking a liberty in the form of sarcasm. Is it freedom of speech in a "Miratorg way"?

As Changli says, from the point of view of common sense, the claimants' request for the appointment of a linguistic examination is quite ambiguous. On the other hand, there is a judicial practice in which an expert examination is appointed even in such obvious cases.

All this are disputes over just one article of The Moscow Post. Now, in addition to this, the court is considering two more cases in relation to other publications, where journalists also have to reflect the "attacks" of the businessmen.

Not only the journalists of The Moscow Post appeared to be under pressure of Miratorg. The topic of a pig farm building next to the graves was also raised by the Communist Party of the Russian Federation in its story on the Krasnaya Liniya TV channel. According to the Communists, the object is being built too close to Teplovsky Hills — an area of the Kursk Bulge, where in 1943 fierce battles took place. In addition to claims related to the memorial, the creators of the video state that the company is building the complex illegally.

Now the Communists will defend their position in court. Just this week, it became known that Miratorg filed a lawsuit and demanded to delete the video, allegedly because the information did not correspond to reality. Kommersant wrote about this.

Colleagues from Readovka.ru had enough from Miratorg for an article about the possible bankruptcy of the Holding companies.

As the authors of Readovka.ru wrote, when preparing the material, they drew attention to the data of one court case, where in the response to the claim of the Rosselkhoznadzor Administration for the Ryazan and Tambov regions, the subsidiary of Miratorg notes that it can not pay the fine and mentions article 50 of the Federal law on insolvency (preparing a bankruptcy case for trial).

In his appeal, the same lawyer Mikhail Emelyanov did not provide the editorial office with any specific phrases or quotes that raise doubts among representatives of Miratorg, as well as evidence to the contrary. Journalists only expressed a position, for which, apparently, they will also be dragged to the courts.

"Half a million wanted", or lawyers also want to eat

It seems that people in Miratorg simply do not tolerate criticism. Is it the reason why they see detractors everywhere?

According to Editor of The Moscow Post Aleksey Kozlov, "even before the trial, some people, who, as they stated, allegedly represented the Linniks, demanded from the publication either money or to name the customer of the materials. Then they asked for half a million in order to solve the "problems". Saying, that the lawyers of Miratorg also want to eat. And kept it that  way.

"There is no customer or customers. Journalists of The Moscow Post prepared their journalistic investigations based on the signals that come to the editorial office. And there are a lot of such signals", - says Kozlov.

"It is evident to us that our publications have never provided any defamatory information concerning Miratorg, and we are only talking about the fact that in their articles journalists touch on topics that disturb the nation: the construction of piggeries near military burial sites and other topics that should be discussed in society, and without open coverage of which there can be no formation of a normal state," - the lawyer told The Moscow Post.