The business, control of which is attributed to the State Duma Deputy Alexander Bryksin, may be associated with the Ural entrepreneur Iskander Makhmudov and the "redevelopment" of the Khakass coal market.

According to the correspondent of The Moscow Post, the State Duma Deputy Alexander Bryksin, who for many years held senior positions in Kurskrezinotekhnika, may still be close to this enterprise and even manage it. But here's something else interesting: the company is part of the RubEx Group holding and is managed by RubEx Group LLC, which is owned by a certain Eugeny Zanizdra. From a businessman, the "threads" lead no less than to an influential Ural entrepreneur Iskander Makhmudov and the Abazinsky mine, around which a real "battle" has now unfolded in Khakassia. Does it mean that Mr. Bryksin may be connected with the redistribution of the Khakass mining market?

Earlier, The Moscow Post wrote in detail about the business of the Deputy's family. Thus, his son Yegor Bryksin is engaged in real estate rental and partners, in particular, with Shagor Stepanyan - the son of the beneficiary of the Osnova GC of Gennady Stepanyan, and a good friend of Senator Vladimir Kozhin. The wife of the parliamentarian now owns the hotel Peter I, and previously had a common business with the scandalous developer Pavel Fuks (now arrested in absentia and hiding in Ukraine), as well as Alexander Ter-Avanesov, who might control almost all Russian road builders. Daughter Elizaveta Bryksina is married to billionaire Anton Petrov - the son of the famous in St. Petersburg and Leningrad region Gennady Petrov, who was credited with a criminal past.

In general, the Bryksin family is clearly not in trouble. And the parliamentarian himself probably continues to earn not only through his parliamentary activities, but is still not far from business. According to the authors of the Arbiter telegram channel, allegedly RubEx Group, which is controlled by JSC Kursrezinotekhnika and Saransk Plant Radiotekhnika, belongs to Bryksin and his partners. Both firms are in the trust management of RubEx Group, which is located in Moscow City - next to the offices that the deputy's son rents out. Moreover, the parliamentarian himself can lobby for these companies to receive solid contracts.

It should be noted that in 2006-2012 Bryksin was a member of the Board of Directors, Deputy General Director for Investments at Kurskrezinotekhnika. That is, the interest in the asset is more than understandable. However, it seems that the working conditions at the enterprise of the deputy are of little concern. According to Kurskiye Izvestiya, in 2016, several employees of the organization were forced to turn to the President, as the management hid from them dangerous working conditions, and, as a result, did not provide them with the benefits they were entitled to. After this story became the property of the media, employees from the management of Kurskrezinotekhnika allegedly received threats of dismissal. Apparently, Mr. Bryksin does not like unnecessary noise, does he?

Apparently, it is for this reason that the RubEx Group is registered to Eugeny Zanizdra - an unknown character who can only be a "nominal" person. If we look at the entrepreneur's card in Rusprofile, it turns out that in 2016, he managed to be the founder of Abazinsky Mine LLC for a couple of months and still owns Ruda Khakassii LLC. Both of these enterprises managed to be "spotted" in very ambiguous stories.

Let's start with the first one - the Abazinsky Mine - which is now owned by the Khakassia Development Fund and Senator Alexander Zhukov. The latter's share has been in trust management since 2019, despite the fact that he could not actually own a business, because it is illegal, beginning from 2016 - since he took post in the State Duma. It is noteworthy that he entered the capital of the Abazinsky mine in the same year of 2016. Does it mean that this was a kind of "increase" to the deputy's salary? 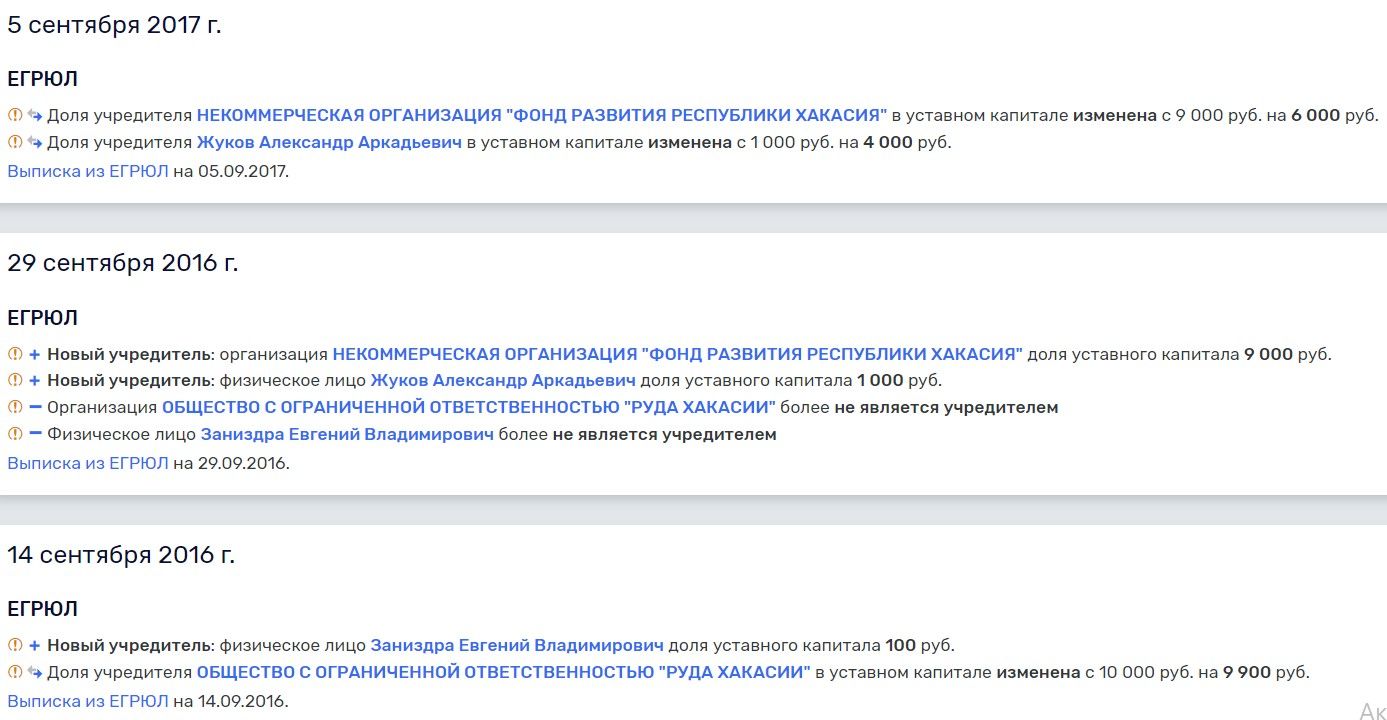 By the way, there were questions about how Zhukov was able to take such a solid political post. As the Puls Khakasii wrote, he was involved in the case of causing almost a million damage to the state budget, being the head of the municipality of the city of Sorsk. However, this was not attributed to major damage, which falls under the scope of the article of the Criminal Code. Therefore, there were no obstacles from the point of view of the law for further civil service for Mr. Zhukov. However, why no one was confused by such a past in the people's deputy? 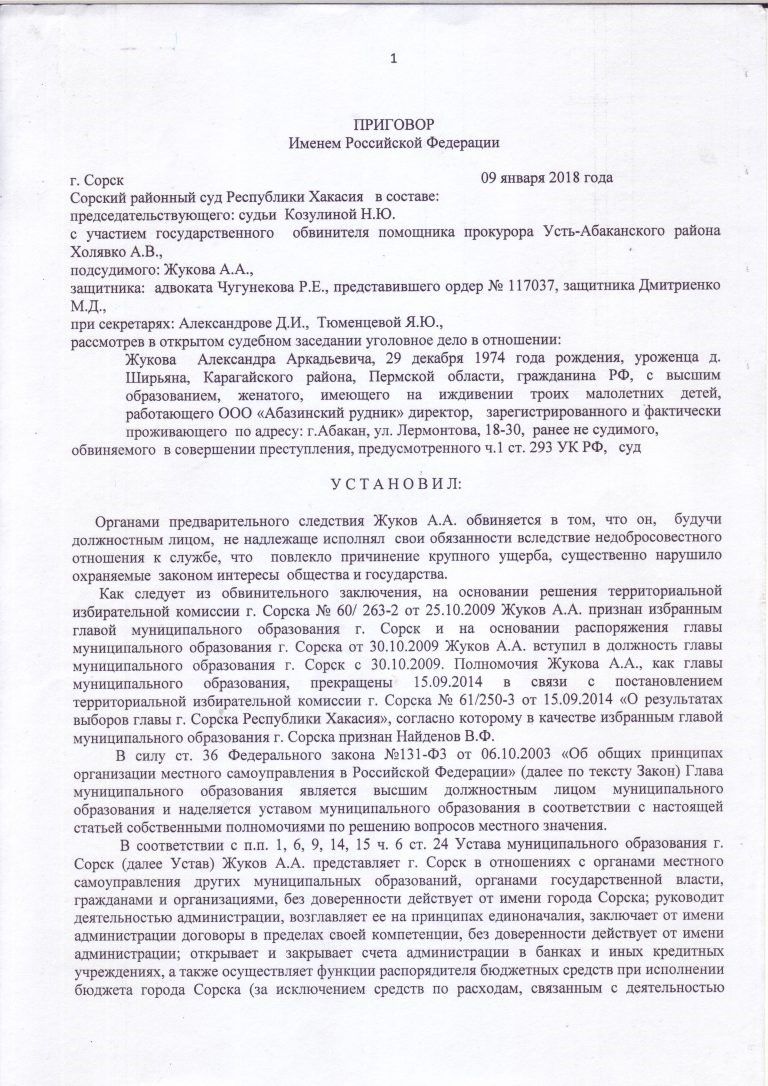 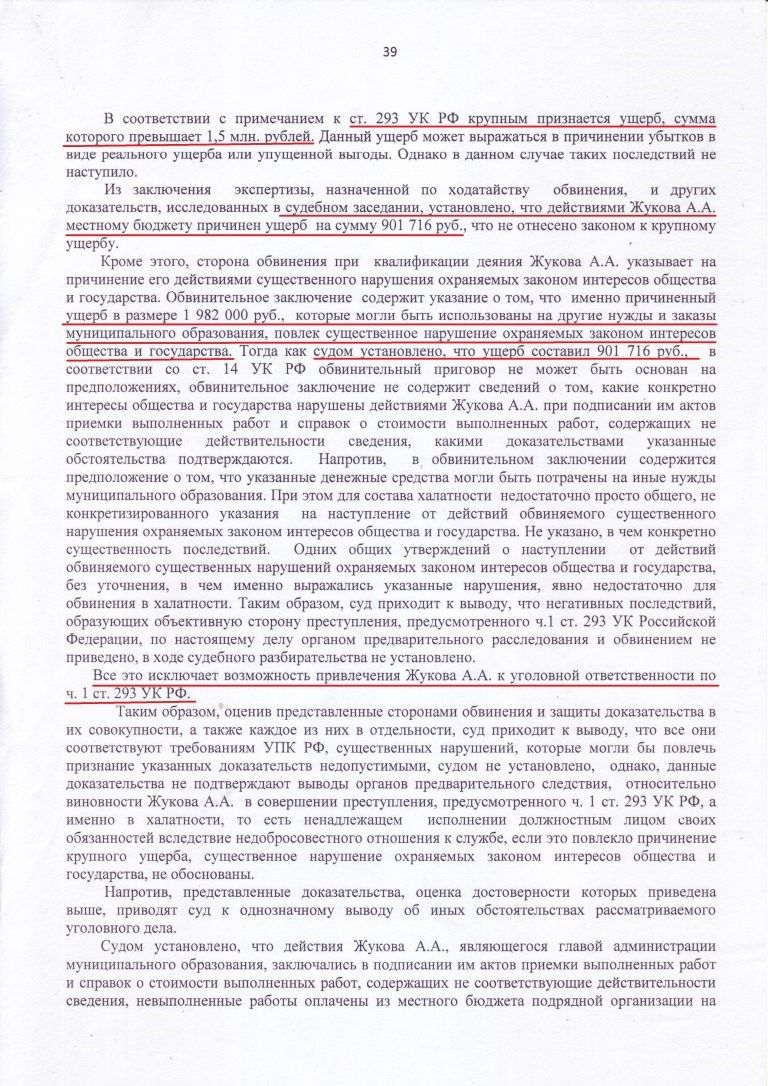 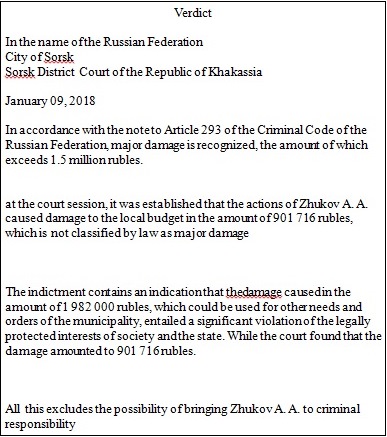 Now everything is uneasy at the enterprise under his control. According to Kommersant, the head of Khakassia, Valentin Konovalov, even announced his intention to apply to law enforcement agencies, as he believes that there is a risk of raiding the bankrupt Abakansky Mine LLC (subsidiary of Abazinsky mine). The application for the purchase of the latter was submitted by Elfan Ramazanov, an assistant to State Duma Deputy Anatoly Karpov, an outstanding former chess player. The latter, according to rumours, may thus help Zhukov to try to maintain control of the enterprise. Previously, this story was described in detail by The Moscow Post.

Is Makhmudov behind everything?

It is possible that the "ears" of the notorious Iskander Makhmudov also stick out in this situation. The fact is that Zanizdra's partner in Ruda Khakassii LLC is Alexey Postrigailo, who, presumably, may be involved in the story of the redistribution of the Khakass market, as well as in the alleged conflict between State Duma Deputy Gleb Khor and the billionaire.

In the coal industry, Postrigailo is not a stranger at all. In the capital of Ruda Khakassii, he replaced Alexander Kleshnya, who established the company in 2013, taking away its Khakass assets from Evrazruda: Abakansky mine LLC, Teysky mine LLC, Mundybash processing plant, Teyskiye Energoseti LLC and Abaza-Energo LLC. A year later, Kleshnya began working in the Ministry of Industry and Natural Resources of the Government of the republic under the scandalous Boris Varshavsky, who, according to Kommersant, was arrested for multibillion embezzlement and tax evasion.

After Kleshnya, the owner of 99% of the shares of Ruda Khakassii became a Moscow businessman Alexander Borodaev. The latter — what a coincidence! - was once the founder of Coalstar LLC together with Boris Varshavsky and Eduard Khudainatov, the president of the NNK.

However, how Postrigailo subsequently gained control of the asset remained a mystery to many people. It was rumoured that in Khakassia, he could represent the interests of long-time partners Iskander Makhmudov and Andrey Bokarev, who own Kuzbassrazrezugol, and allegedly could withdraw funds from there through a chain of companies.

And here it is worth remembering that Mr. Makhmudov's detractors attributed the connection with the Izmailovo organized criminal group, as well as the fame of a man who "rakes" assets. If this is true, then it is unlikely that he would have passed by the Khakass enterprises?

But Postrigailo worked as a general director in EcoTechStroy Vladimir, which deals with waste in the Vladimir region. This company was once owned by Makhmudov and Bokarev. And they allegedly sold it after a series of waste scandals, when activists suspected that waste was being exported to the Vladimir region from Moscow. Or did they not sell it, but put their own man in charge?

According to the Arbitration court of the Republic of Khakassia website, Alexey Postrigailo on behalf of Razrez Arshanovsky LLC filed a lawsuit against the beneficial owners of the cut to recover 5 billion rubles in losses. However, what does Postrigailo have to do with the Razrez Arshanovsky? Officially, the beneficiaries of the Razrez Arshanovsky are Vladimir and Andrey Lunevs, who come from the Luhansk region. It is not surprising that they entered the market of a neighbouring country - but why Khakassia, and not, say, the Rostov region, which is much closer to their historical homeland?

But the alleged theft of products in the section occurred from 2015 to 2017, that is, after the change of power in Kiev. Is it possible that the businessmen there were out of business and "rushed" to Russia? And there they met Makhmudov.

By the way, it is known that the theft at the section was carried out with the help of Rutek LLC, whose founders are Andrey Lunev and Yakov Khor, the father of State Duma Deputy Gleb Khor. The latter was close to Andrey Makarov, who was an adviser to the ex-governor of the Kemerovo region, Aman Tuleyev. Mr. Makhmudov was on good terms with the latter. In general, it seems, as if everyone can be "tied" to each other. However, in this case, it turns out that Khor and Lunev could have "acted" against Makhmudov, since they dealt with embezzlement.

To finance the project, Razrez Arshanovsky periodically borrowed from Rutek and Hong Kong-based Rutek Ltd. Loans to finance working capital are provided by Natalia Fedorovna Khor, the wife of Deputy Gleb Khor, as well as offshore Feltar Ltd. State Duma Deputy Gleb Khor himself does not seem to have anything to do with the business of the cut. However, there are rumours that his income from this business can be tens of millions of dollars. According to the authors of the Compromat Group portal, allegedly Khor could be a partner in the coal business of the late businessman Dmitry Bosov.

There is a very interesting interweaving of business interests of politicians and entrepreneurs, it seems not accidental that the "threads" from individual characters lead to one person - Iskander Makhmudov. One can't help but think that a billionaire can "manage" the businesses of Russian deputies and senators. In this case, Mr. Bryksin is simply one of his possible "clients", isn’t he?