Declare it: what doesn't Senator Nevzorov want to remember?

In the fight for the Senate seat from Kamchatka, the current member of the Federation Council of the Federal Assembly, dubious business and rumors about the sale of mandates may be remembered to Boris Nevzorov.

Before the Kamchatka gubernatorial election, Boris Nevzorov, the current Senator from the region, launched an active campaign to lobby for his candidacy to the Federation Council. According to The Moscow Post, next week he will arrive on the Peninsula, where he will hold a visiting meeting of the Commission of the Federation Council for the development of the Northern territories.

It is not difficult to guess that Nevzorov is concerned about his future, and more specifically - the Senate seat, which he clearly does not want to leave. He has been sitting there for a long time - since 2011. It seems to be time to leave - but no.

Apparently, Nevzorov's business, written on him, and other commitments which he had to take on in front of different players, agreeing to extend his term in office do not let him leave the offices of the Federation Council.

At the same time, a huge number of scandals occur around the Senator every year. Detractors claim that Nevzorov could earn his fortune, as well as his political weight, thanks to racketeering and almost banditry. Although there is no evidence of this, and formally Nevzorov is clean before the law, these conversations come tohether with his fabulous wealth from year to year.

Battle for the fish

Nevzorov's business has long been a byword. Just like his constant conflicts and scandals with his competitors. First of all, with the co-founder of Okeanrybflot, also a member of the Federation Council from Kamchatka, Valery Ponomarev.

Frankly speaking also an odious person. Now Ponomarev should be the main competitor of Nevzorov in the fight for the senatorial seat. Just like in the film Highlander - there can be only one. And it seems that Nevzorov is doing everything to make sure that he is the one.

It is rumoured that Valery Ponomarev is very annoyed by the way Nevzorov conducts business. Supposedly, he is using some corrupt connections and is looking for a non-competitive way to get fishing quotas. It is unclear whether this is true, but it is known that in 2018, the senators entered into an open conflict.

Then the competition for the right to fish on one of the sites in the Kamchatka Bay was won by Nevzorov's Ustkamchatryba company. Ponomarev and his Okeanrybflot did not agree with the result of the tender, which did not want to give a competitor the opportunity to earn $100 million on catching Far Eastern fish over 20 years. He challenged the decision of the Competition Commission, claiming violations, this was written by the PASMI publication.

However, such conflicts do not prevent Nevzorov from earning fabulous money. According to the information in his income statement, which is provided by the Declarator portal, 2019 was a very successful year for the Senator. His revenue was 318 million rubles.

This, however, is less than in 2018, when it turned out to be in plus by 526 million rubles. Among other things, the area of real estate owned by Nevzorov today is about 3.2 sq. km. It turns out that today Nevzorov receives an average of 28 million rubles a month, which is equal to the average monthly income of 485 residents of the Kamchatka territory. Not bad!

The main asset of Boris Nevzorov has been the already mentioned Ustkamchatryba LLC, which is engaged in processing and preserving fish, crustaceans and shellfish, as well as other "fish" businesses. The company is more than profitable. For 2019, it brought its owners 546 million rubles of profit with a solid revenue of 1.7 billion rubles.

However, if we look at the list of the owners, we find just a wild, scandalous detail. If the information provided by Rusprofile service is true, then Boris Nevzorov owns 45% of Ustkamchatryba LLC directly. In other words, its share is not held in trust management.

Wait, isn't that illegal? Senator Nevzorov doesn't seem to care. Another 10% of the company is owned by Tatyana Nevzorova. Probably a close relative of the Senator. Usually, people's deputies do this - they give their share to the management of close people, distancing themselves from business as much as possible. But not in the case of Nevzorov. 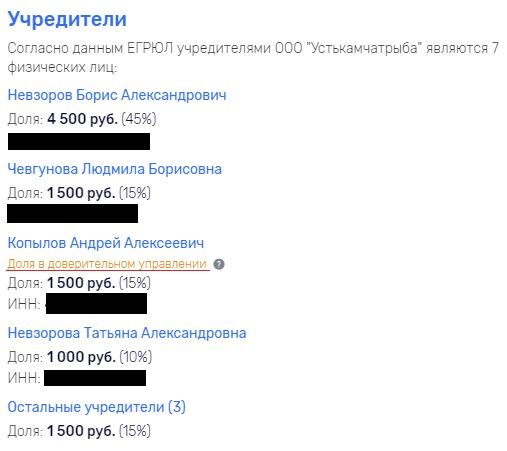 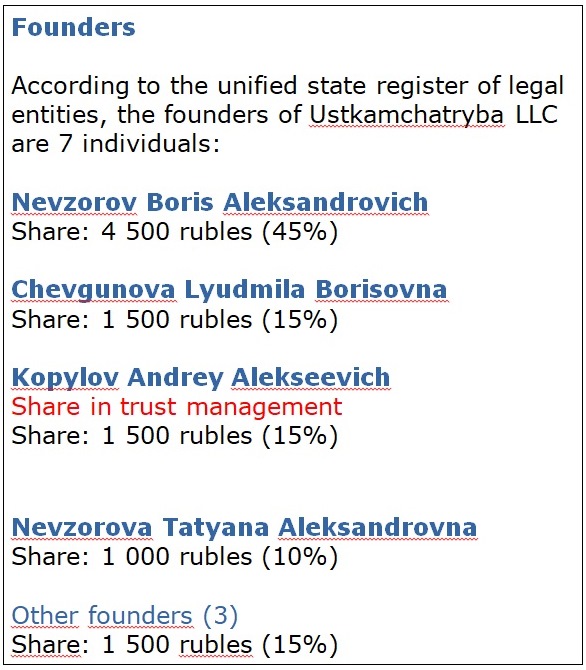 For example, Nevzorov's partner in this business, Deputy of the Legislative Assembly of Kamchatka Andrey Kopylov owns 15% of the company's shares. And, as a people's Deputy, in accordance with the current legislation, he put his share in trust management. Why doesn't Nevzorov do this? Has he got it all covered?

It may seem, but it not like that in reality. There is reason to believe that money is banally withdrawn from Ustkamchatryba. Where and why is also a question. Among the subsidiaries belonging to Nevzorov's Ustkamchatryba LLC very interesting ones are found. For example, there are signs of fictitiousness in the subsidiary Mystery of Kamchatka LLC, which is engaged in tourist activities.

Only one person works in a structure with an authorized capital of 10 thousand rubles, but the company is profitable, even if the profit is modest. For 2019, it earned 2.3 million rubles with a revenue of 19 million rubles. However, the book value of the company's assets is somehow zero.

Another subsidiary of Ustkamchatryba - JSC Municipal Kamchatprofitbank which credits local fish production is much more interesting. But not only them, because today the pool of state orders of this JSC a small, in fact, Bank, has exceeded 267 million rubles. 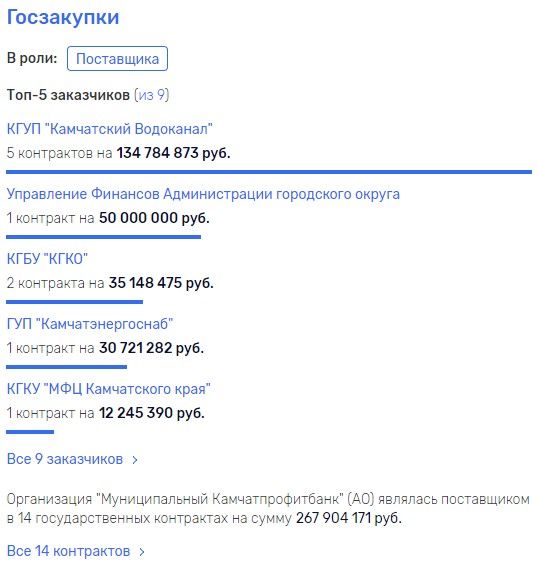 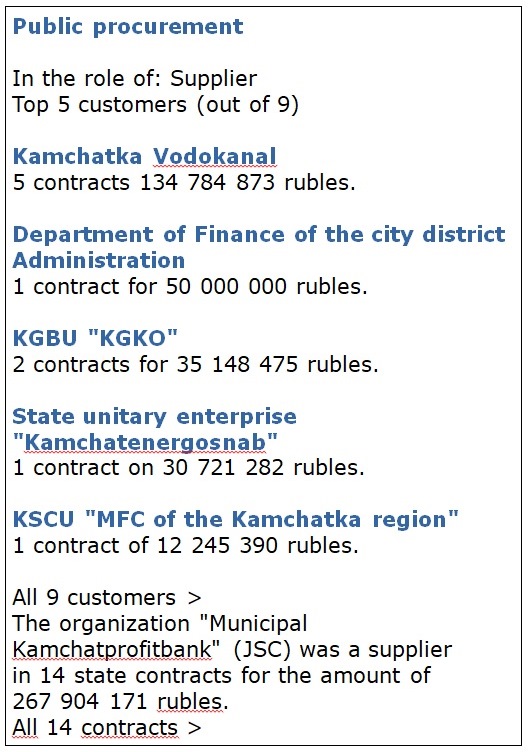 Key customers include Kamchatka Vodokanal (134 million rubles), Petropavlovsk-Kamchatsky Finance Department (50 million rubles), and other state and municipal structures of the Peninsula. And no one is at all confused that such serious tenders are won over and over again by a JSC directly affiliated to the current Senator from the region.

It should be under concern. After all, if we look at the Bank's financial statements, it is not clear why it works at all for the entire previous and this year. And on what basis a Bank with such indicators is not just declared the winner, but generally allowed to bid.

Because from August 2019 to August 2020, almost all the organization's indicators are in the red zone. Which makes one think that money is simply being withdrawn from the Bank. And at a rapid pace.

During the year, the Bank's net assets fell by 18%, or more than a billion rubles. The form 123 capital decreased by 6%, the loan portfolio - by almost 12%, and individual deposits fell by 22%. Funds of enterprises and organizations decreased by 8.5%. That is, depositors are fleeing the Bank. Do they believe that the institution will soon lose its banking license, or do they simply not want to deal with the structures of such murky characters as Nevzorov? 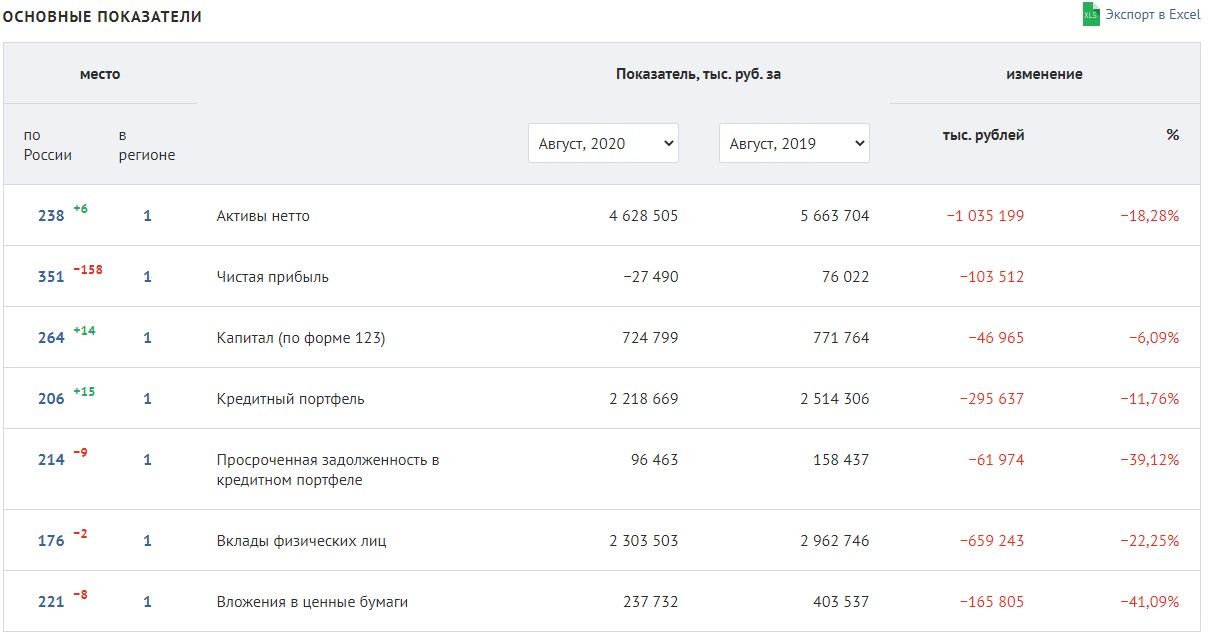 But, it seems, that Nevzorov really controls everything. Moreover, since the last century. Perhaps it is not for nothing that his detractors call him "solver from the 90's". According to the authors of the E-news website, allegedly one of Nevzorov's favorite activities was selling seats in the Legislative Assembly of Kamchatka. Even the cost is called - as if to get to the deputies through Nevzorov, it was necessary to pay $300 thousand.

Many believe that Nevzorov's partner Alexey Kopylov could have got into the regional Parliament in 2016 exactly this way. And few people are surprised by these rumours, because Nevzorov himself was the Chairman of the legislative Assembly of Kamchatka for a long time. And before that, he worked for many years as a senior operative of the OBKhSS of the Kamchatka region.

However, then he was dismissed for unknown reasons. According to rumours, not for the most plausible reasons - he could take bribes, but the management could not prove anything, so they just said goodbye to him. It is difficult to believe this version in the absence of any evidence, but it has a right to exist.

Just after that, in the 90s, Nevzorov went on the business path. And how effectively! According to the authors on the Maxpark website, he allegedly started it with a raider seizure of the company RKZ-66, which was carried out not without the help of members of the OCG Obshchak and employees of the police Department close to Nevzorov in the Ust-Kamchatsky district.

It is interesting that head of this Department, Sergey Domoratsky, was later appointed head of the Federal Service for Veterinary and Phytosanitary Surveillance in the Kamchatka region during the Nevzorovsky "political" period. Served out?

Nevzorov managed to work as the head of the Ust-Kamchatsky municipal district before his parliamentary activity, where he could also leave traces. His subordinates could be involved in a series of violations on a particularly large scale when using budget funds.

Considering all of the above, Boris Nevzorov is a notable chief and entrepreneur. Though, he seems to work only for himself, and not for his native land and its inhabitants. Apparently, this is why, according to the authors on the Fishki website, allegedly the Senator is a citizen of three countries - Russia, Cyprus and the United Kingdom.

Nevzorov's detractors are convinced that he has "covered" himself abroad. So why is it needed to cling to power in such a way, dream of a new term already at retirement age, and even with a swollen Bank account? Apparently, power and money are addictions that he not only does not want to give up, but can not.