The rector of the Yakut University was suspected of large-scale corruption, but it seems that he could have been involved in it long before – even in the rank of Minister of Agriculture of Yakutia.

According to the correspondent of The Moscow Post, law enforcement agencies detained the rector of the Arctic State Agrotechnological University (ASAU), and at the same time the Deputy of the State Assembly (Il Tumen) of the Republic of Yakutia Ivan Sleptsov. According to the Prosecutor's office, the University has illegally received 250 million rubles since 2016. From the Federal budget for the training of 136 non-existent students - that is, by analogy with the immortal classics, "dead souls".

It was in 2016 that Ivan Sleptsov took up the post of rector of the University. Before that, enterprising Deputy Il Tumen worked as the Director of the agricultural enterprise JSC Neryungrinskaya Ptitsefabrika, and even earlier as the Minister of Agriculture. There, he could gain experience on how to use the budget for his own benefit. And not only for himself, Sleptsov could give a "start to business life" Albert Yegorov, who is an entrepreneur now. But first things first.

If the version of the investigation is confirmed, then Sleptsov began to break the law, barely sitting in the rector's chair. But there have been questions to him for a long time: the management under Sleptsov frankly "fattened". At the beginning of the year, he announced a competition for the purchase by the University of the Toyota Land Cruiser 200 car for almost 5 million rubles in practically the "coolest" of the available configurations. This was reported by the Novosti Yakutii portal.

That is, a person could presumably not only steal budget money for students education, but also buy cars at a budget expense, as if the University has nowhere to put the money. We will not be surprised if Sleptsov himself drove this car after the purchase. And why buy on your own, when there is such a convenient budget mechanism?

Is extortion part of the educational process?

There is another mechanism - extortion from subordinates. According to the authors of the Vesti Yakutii website, allegedly Sleptsov secretly obliged all teachers of the Arctic State University (formerly called the Yakut State Agricultural Academy), regardless of their position, to pay 150 thousand rubles a year.

The scheme of "extortion" could be as follows: on a quarterly basis, each teacher could pay 37.5 thousand rubles in cash through the rector's proxies, who, through shell companies with accounts that had nothing to do with agriculture or agricultural processing, allegedly ordered certain scientific research in the field of agriculture.

In this sense, the money could be transferred to the Academy's payment account, but no research was conducted in thas case, of course, since there should not have been an order in fact. It sounds wild, there is no evidence, but if Sleptsov's guilt in possible fraud is proved, who will say that the above-described option of extortion and theft can be excluded?

At the same time, it is not clear on what grounds he took the chair of the rector of the Arctic State University at all. Rumour has it that his doctorate thesis is just a fake. The conversations were long and serious, as a result, according to the authors of the SakhaDay website, allegedly Sleptsov was forced to counteract such questions in social networks, where he said that he was "at the final stage of preparing his research work at that time." So there is no work, or what does he mean?

Anyway, the Arctic State University is the apogee of his career, but what happened in the Ministry of Agriculture when he was a Minister in 2011-2014? A lot of things, for example, corruption scandals.

In 2011, a criminal case against leaders from twenty farms and three employees of SUE Sakhaplemobyedineniye, subordinate to the Ministry was opened in Yakutia. They were accused of fraud committed by a group of persons by prior agreement, using their official position, and causing damage on a particularly large scale. This was reported by Novosti Yakutii.

It can be assumed that they could have committed crimes before Sleptsov came to the minister chair, but here's the point: until 2011, Sleptsov was the General Director of JSC Neryungrinskaya Ptitsefabrika, which belonged to the Republic. So, probably, he could participate in frauds. Was he not touched, because he had been only "put" as the Minister recently?

Even before coming to the Ministerial chair (and later - too), Sleptsov actively advocated for increasing the number of cattle in Yakutia. Under this "sauce", purchases of cattle from Kalmyk Broiler LLC, established in 2010, were promoted. Its CEO was Ivan Sleptsov - though not our hero, but allegedly his father and full namesake.

The founder of the structure was JSC SaaS GC, later renamed to JSC Technologies and Investments in the Agro-industrial Complex (TINACO). The Board consisted almost exclusively of Yakut people, and 29% of the shares, according to the authors of the YKTIMES website, were allegedly held by Sleptsov Sr.

After the scandal caused by rumoгrs about Sleptsov's connections with this business (at that time he was already a Minister), the General Director was replaced there - it was allegedly a financier close to Sleptsov, Albert Yegorov, who previously worked at Gazmropbank. Besides, Sleptsov's countrymen had too many questions - why PR purchases of cattle from a company from Kalmykia, and why the Board of Directors of Broiler were to be natives of Yakutia only?

Meanwhile, Mr. Yegorov has since become a big agricultural magnate, and, according to evil tongues, not without the help of the current rector of the Arctic University. Rumour has it that he was behind TINACO and tried to attract investment in the structure through the Ministry of Agriculture of Yakutia.

Interestingly, in February 2020, Kalmyk Broiler LLC was declared bankrupt. Why so late? At the end of 2019, it had zero in the asset value column and losses of 1.1 million rubles with 1.3 million in revenue. But the company's authorized capital is over 65 million rubles! Who and how pumped the company with money, and where did this money go after the bankruptcy?

Did they go to Albert Yegorov, who might be Sleptsov's close friend? Here's the connection. Ivan Sleptsov (who he is - the current head of the University, his father, or even an outsider - judge for yourself) still remains among the founders of the company. 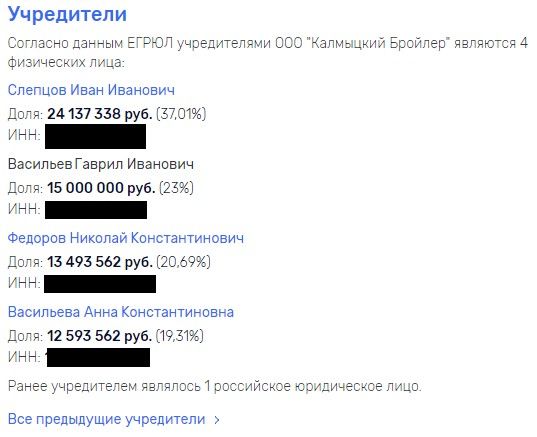 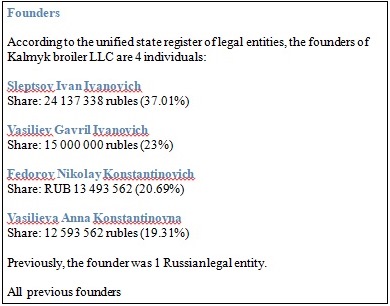 Yegorov is the owner of several companies related to agriculture now. And, perhaps, the start was given to him by Ivan Sleptsov, with whom he could have had a common business in the past. Yegorov owns MMK MC LLC, which is engaged in cattle breeding. However, the company looks like a fictitious one for withdrawing money. If in 2017 (the year TINACO ceased to exist) the company had revenue of 75 million rubles, then at the end of 2019 - zero. But it has a bit of state contracts, as if Yegorov was paid for good service - 2.7 million rubles. Why doesn’t anyone check this dubious business?

Another important detail. According to the authors of the YKTIMES website, they allegedly even interviewed Sleptsov, where the latter flatly refused to recognize any connection between TINACO and Kalmyk Broiler. And what to do with the data in the USRLE then?

In addition, Sleptsov allegedly admitted that his father was among the founders, but he did not develop the company, since his son asked him to leave the project when he became a Minister. Another point: offshore Aneer Investment LTD was mentioned among the founders of the office, but it was not possible to confirm this. It turned out that there is no information from USRLE of Kalmyk Broiler on the same Rusprofile earlier than 2014 (when Sleptsov left the Ministry). Was anyone trying to cover their tracks?

If all the facts are put together, it can be said that clouds have been gathering over Ivan Sleptsov for a long time. It seems that he fought back, but somehow sluggishly. However, in the end, he could get caught not on what he was worried about at all. If now Yegorov's guilt in possible fraud on money for "dead souls" is proved, who will be surprised if his past affairs - in the Ministry and at the head of an agricultural enterprise-also come out?